The cables and conductors market in India has grown exponentially over the years on the back of sizeable investments in the power sector. The market is poised to grow significantly in the future as well, given the planned investments for strengthening and augmenting the country’s transmission and distribution (T&D) network. Large-scale transmission infrastructure is required to carry the power generated by the growing renewable energy capacity, which is targeted to reach 175 GW by 2022, to the load centres.

However, the expansion of the transmission network is restricted by the lack of right-of-way (RoW) permissions. Utilities are therefore focusing on optimising power transfer per unit RoW and increasing the current carrying capacity of transmission lines. Replacing the existing aluminium conductor steel reinforced/aluminium conductor composite core with high temperature low sag (HTLS) conductors is one solution. Other solutions include using superconducting transmission lines (SCTLs) and gas-insulated lines (GILs). In the cables segment, underground cables and e-beam cables are rapidly gaining traction. Other solutions include the use of high surge impedance loading (HSIL) lines and cross-linked polyethylene (XLPE) cables.

GILs: GILs use gas with high dielectric strength as the insulating medium instead of air to reduce electrical clearance. They consist of aluminium conductors surrounded by a mix of nitrogen and sulphur hexafluoride inside an enclosure. GILs come with several benefits, such as higher transmission capacities and lower transmission losses than overhead lines and other types of underground cables due to the large size of conductors and lower resistance. These lines offer greater reliability with no risk of fire and have electromagnetic fields that are 15-20 times smaller than those of conventional power transmission systems. They offer high operational safety and longer life. GILs are ideally suited for cities that have RoW limitations for overhead lines.

XLPE cables: Cross-linked polyethylene cables are used in places where overhead construction is impractical. XLPE cables have low visual impact due to their underground installation. Land use is minimised, thereby reducing the environmental impact. XLPE cables offer an affordable and justifiable solution as they have a very low maintenance cost. A few constraints in the adoption of XLPE cables are their high cost, and possible damages. Power Grid Corporation of India Limited (Powergrid) has deployed 320 kV HVDC XLPE cables for the Pugalur-Trichur HVDC project, Monopole 1 of which was commissioned recently. The converter stations are linked via a 108 km XLPE HVDC cable system comprising four cables covering a route of 27 km each, and an overhead transmission line route of about 155 km. 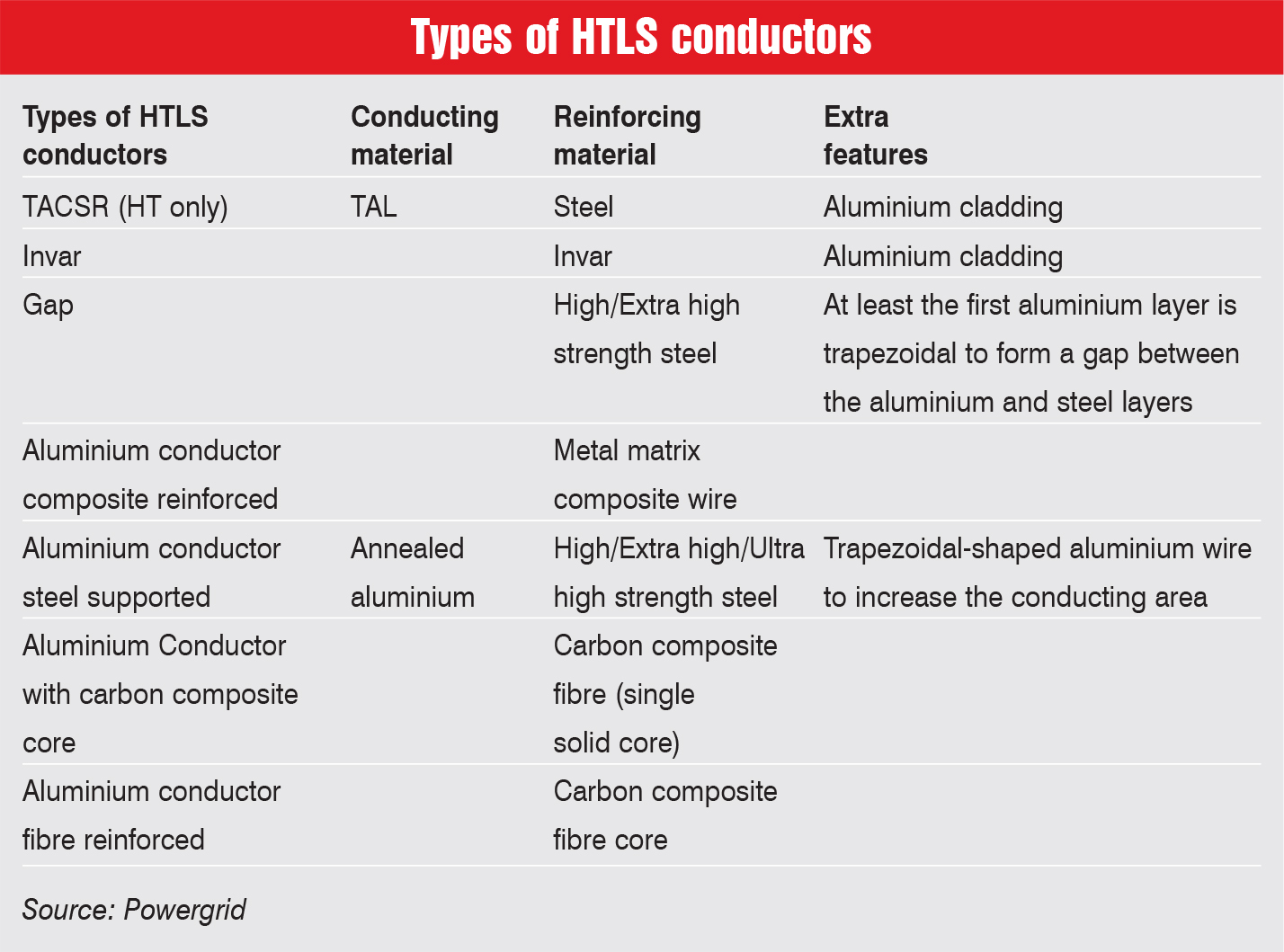 The first HTLS project in India was implemented by Powergrid for the line-in-line-out (LILO) of one circuit of the 400 kV double-circuit (D/C) (quad) Dadri-Ballabgarh transmission line at Maharani Bagh, wherein it deployed Invar type HTLS conductors. Since then, Powergrid has used HTLS conductors at the 132 kV, 220 kV and 400 kV levels in 34 transmission lines. The four types of HTLS conductor technologies that have been adopted are Invar, gap, aluminium conductor composite reinforced and aluminium conductor steel supported. A large part of its installation is being undertaken in eastern India, forest corridors and RoW-constrained areas. The company has used twin HTLS conductors instead of quad/triple bundle ACSR conductors in multicircuit stretches.

HSIL lines: The transmission capacity of overhead lines is limited owing to reactance. When such a limitation occurs, HSIL lines help to limit the voltage drop and thus increase the power transfer capability. These lines provide a higher natural power or surge impedance loading than conventional line configurations. The HSIL line concept can be applied to both new lines and existing ones. Countries such as Brazil, Russia and China have successfully deployed HSIL lines for very long distances (>250 km). Powergrid has also deployed the technology in the 400 kV (quad moose) Kaithal-Meerut line (of about 16 km). Another emerging cable type is electron-beam or e-beam, employed in high temperature applications in the solar, railway and shipping segments. These cables offer superior performance in extreme environments, have high tensile strength, and offer greater thermal, abrasion and deformation resistance. Given that transmission losses are reduced at higher voltages, transmission and distribution utilities are looking at installing extra high voltage cables at voltages of 66 kV and above. Also, with the growing demand for power in urban areas and industries, underground cable systems are being deployed by utilities.

The cables and conductors business has enormous future prospects, driven by the government’s planned investments in the electricity sector. Central government initiatives such as the Integrated Power Development Scheme and the Deendayal Upadhyaya Gram Jyoti Yojana, large-scale grid integration of intermittent renewable energy along with the government’s focus on achieving “Power for All”, and Indian Railways’ ambitions for 100 per cent rail electrification are a few of the industry’s growth indicators, reinforcing investment in network strengthening and upgradation. Meanwhile, the sector faces problems such as raw material price instability (for steel, aluminium, zinc, etc.) and a significant reliance on imports from China, the UAE, Russia and Japan. Furthermore, delays in project execution caused by the need for various permits and approvals are a key obstacle to the industry’s growth.

To summarise, rising industrialisation, population growth, the necessity for stable and efficient power supply, and the expansion of renewable energy capacity have all contributed to increased demand for cables and conductors. Moreover, the industry’s demand pattern is likely to continue in the future.