India’s power transmission segment has seen considerable growth in the past few years owing to the increasing power demand and capacity addition, especially in the renewables segment. Grid expansion is being driven by the need to evacuate power from the upcoming renewable energy projects, given the government’s ambitious target of 450 GW of renewable energy by 2030. Key projects such as green energy corridors and a transmission system for renewable energy zones are under way to facilitate the integration of renewable energy into the grid. On the technology front, high voltage direct current (HVDC) is one of the key focus areas, as it helps transmit electricity over long distances with minimal losses. Moreover, transmission utilities are transitioning to digital substations, as well as adopting various digital and online tools for asset management and monitoring.

Power Grid Corporation of India Limited (Powergrid) continues to dominate the country’s transmission sector with 168,256 ckt. km of lines and 438,108 MVA of substation capacity (as of May 2021).

The transmission segment is set to grow over the coming years, driven mainly by the need to evacuate power from large-scale renewable energy projects. With the government’s target of setting up 175 GW of renewables by 2022 and 450 GW by 2030, transmission systems will require significant expansion and strengthening. The green energy corridors projects are being implemented in a phased manner by Powergrid and state transmission utilities, with the objective of integrating large-scale renewable capacity into the national grid. For the interstate transmission system (ISTS), 3,200 ckt. km of transmission lines and six substations aggregating 17,000 MVA have been commissioned. Meanwhile, at the intra-state level, 9,800 ckt. km of transmission lines and 22,700 MVA of substation capacity are under implementation. Apart from this, a comprehensive transmission plan has been developed for the evacuation of about 20 GW of energy from ultra mega solar power parks. In addition to this, the Ministry of New and Renewable Energy has identified potential solar energy zones (SEZs) (50 GW) and wind energy zones (WEZs) (16.5 GW) in seven renewable energy-rich states: Tamil Nadu, Andhra Pradesh, Karnataka, Tamil Nadu, Gujarat, Rajasthan, Maharashtra and Madhya Pradesh.

Another growth driver for transmission infrastructure is the government’s focus on creating a regional power grid to utilise resources in the South Asian region in an optimal manner as well as help stabilise the Indian grid in the wake of the increasing share of renewables. To realise the vision of a South Asian grid, there is a need to build new transmission networks and strengthen existing ones. The growing power demand in the country also creates the need for transmission network expansion. The per capita electricity consumption in India vis-à-vis the global average was 1,181 units in 2018-19, and the target is to enhance it to 2,984 units (that is, 2.5x) by 2040. The expansion of the transmission network in order to accommodate the growing demand for electric vehicle charging is another demand driver. 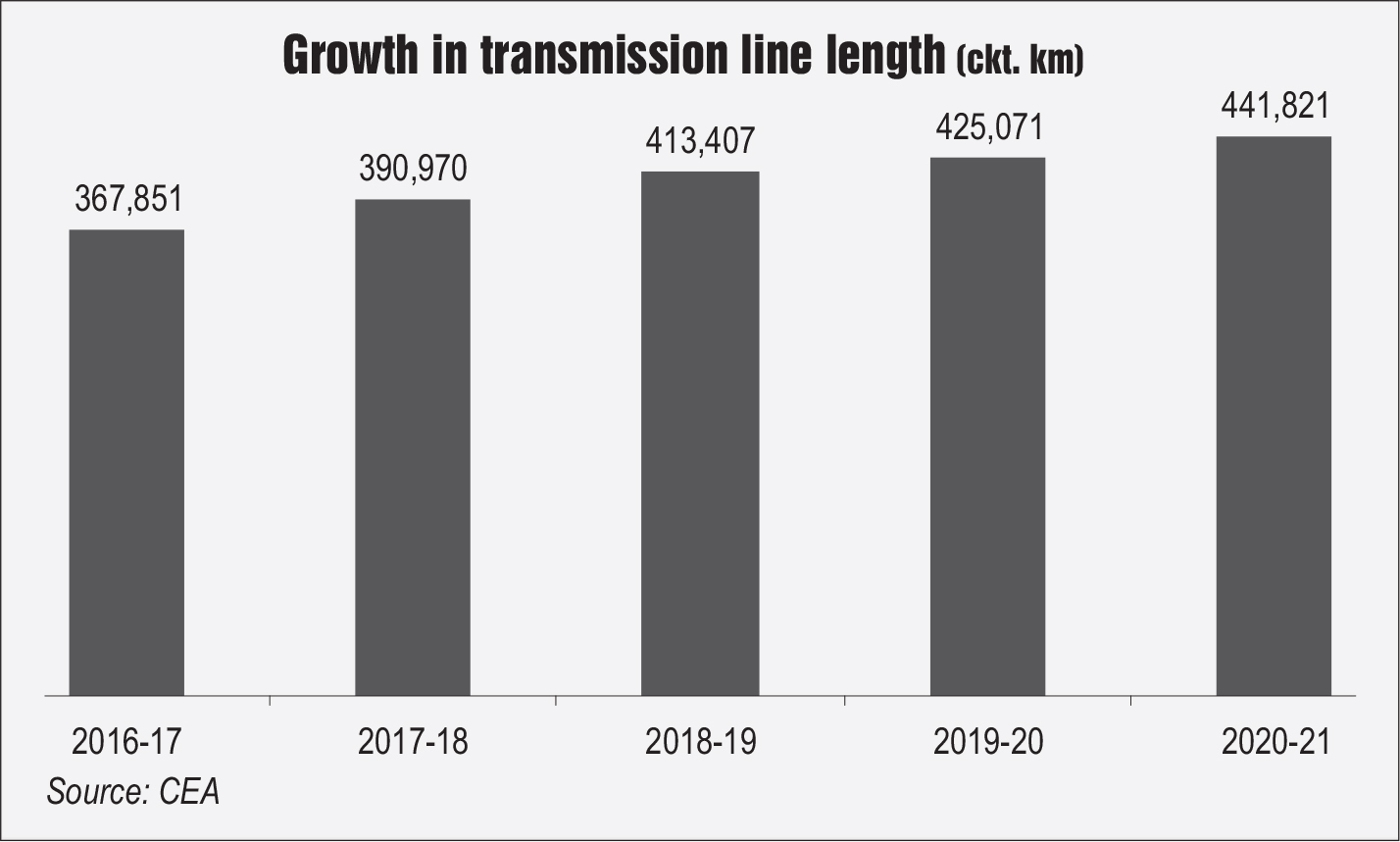 HVDC is one of the key technology focus areas for the country. It helps transmit electricity over long distances with minimal losses. An HVDC system can reduce transmission losses by around 50 per cent compared to high voltage alternating current, and it is the only viable method to transport a large amount of electricity in a cable system. In a recent development, in June 2021, Powergrid commissioned Monopole I of the ±320 kV, 2,000 MW, Pugalur (Tamil Nadu)-Thrissur (Kerala) voltage source converter (VSC)-based HVDC system. With this project, the state-of-the-art VSC technology has been brought to India for the first time by Powergrid. VSC technology has significantly reduced land requirements as compared to conventional HVDC systems and is suitable for areas where land is scarce.

Another technology trend in the power transmission segment is the growth in the uptake of digital switchgear and substations. Digital substations comprise sensors and intelligent electronic devices and enable utilities to identify, prevent and rectify faults, thereby ensuring reliable power flow. The application of process bus architecture in digital substations helps add flexibility by enabling digital devices to communicate directly with each other. Powergrid had commissioned the first substation based on the IEC 61850 standard in 2007. It has now initiated a project for retrofitting conventional protection and control schemes with advanced automation systems in the substation space. Apart from this, there is a growth in the deployment of gas-insulated substations (GIS) and hybrid substations in place of conventional air-insulated substations (AIS) to address right-of-way (RoW) issues. GIS substations are indoor type, wherein equipment is placed inside modules filled with sulphur hexafluoride gas (the insulating medium). They require substantially less space, entail lower maintenance costs and also have a lower outage rate. Although the initial cost of a GIS is around 50 per cent more than that of an AIS, when the cost of land is considered, the overall capital cost is comparable.

New and emerging technology solutions are also being deployed in the construction and operation of transmission projects owing to time and space constraints. Project developers are deploying LiDAR technology, drones and air cranes for the construction of transmission lines, and thermovision cameras and Android-based applications for operations and maintenance. In order to enhance the availability of the transmission network, utilities are also deploying online asset monitoring tools. Digital tools are being deployed for patrolling of towers and rectification of defects. Powergrid has deployed travelling wave online fault locators in a number of high capacity lines for accurate estimation of fault locations. This has helped reduce the downtime of transmission lines by identifying the faults in the shortest possible time. Further, the utilities have adopted state-of-the-art condition monitoring techniques for substation equipment to detect defects at the incipient stage. Overall, almost all transmission utilities are working on the digitalisation of works in all departments. The state utilities are making arrangements for remote inspection and maintenance. For immediate fault detection and faster rectification, MAHATRANSCO has started using drones to carry out inspection and maintenance assessment of power lines in the state.

Several challenges need to be resolved to ensure that the grid expansion plans are on track. A lack of adequate RoW is perhaps the most pressing, long-standing problem for transmission system developers. It is estimated that about 90,000 ckt km of under-construction transmission lines (over 220 kV and above) are facing RoW issues as of August 2020. It is not unusual for transmission lines/projects to be entirely dropped owing to RoW issues. Further, due to the lack of harmonisation of policies and regulations across states, developers face issues in project development, particularly in securing RoW and obtaining environmental and forest clearances. Apart from this, from a grid planning point of view, there are challenges in the transmission segment related to the short gestation period of renewable energy plants, reactive power management, fault levels at the point of interconnection, the diversity of resources, and the quantum of renewable energy generation.

To conclude, in order to meet the future peak load, which is expected to reach 226 GW by 2022 and 267 GW by 2025 (from 184 GW at present), huge investments are required to strengthen and ramp up the country’s transmission infrastructure. The NIP has estimated a capital expenditure of about Rs 3,040 billion for the power transmission segment between 2020 and 2025. The state utilities are expected to lead the transmission segment with a projected capex of Rs 1,900 billion. Overall, the government’s ambitious plan to expand renewable energy to 450 GW by 2030 is a key driver for grid expansion, and private investments are likely to play a significant role in grid expansion. The power grid of the future will be required to be more flexible, smart and resilient, with growing decarbonisation and digitalisation across sectors.