Coal-based thermal power plants (TPPs) generate a large portion of the greenhouse gas emissions in the country, thereby contributing to pollution and diminished air quality. In TPPs, the combustion process converts some of the nitrogen bound in coal to form oxides of nitrogen (NOX) such as nitric oxide, nitrogen dioxide and nitrous oxide, which are collectively referred to as NOX.

However, in July 2020, the Supreme Court allowed the relaxation of NOX norms for TPPs installed between January 1, 2004 and December 31, 2016 from 300 mg per Nm3 to 450 mg per Nm3. The Ministry of Power (MoP) had proposed the revision of norms as TPPs were unable to meet the existing limit (300 mg per Nm3 and below) at varying load conditions. The Central Pollution Control Board monitored emissions at seven power plants of NTPC Limited for a specific period and the results were found to be in line with the MoP’s observations. As per NTPC’s environment, social and governance data, the NOX emissions from NTPC’s plants cumulatively stood at 562,240 metric tonnes in 2019-20, recording a CAGR of 1.91 per cent since 2009-10. The genco’s specific NOX emissions, however, reduced from 2.13 gram per kWh to 1.88 gram per kWh during this period.

The primary technologies include combustion measures that limit the production of NOx from the combustion zone by promoting its conversion to nitrogen. Over fire air (OFA) systems and low NOx burners (LNBs) are some of the primary technologies that are cheaper and can be implemented quickly vis-à-vis advanced control techniques. Most TPPs commissioned after 2000 already have some form of in-combustion NOx control.

In LNBs, the initial fuel combustion occurs in the fuel-rich and oxygen-deficient zone. After this combustion, the air required to complete the combustion of coal is added. This reduces peak flame temperatures and slows down NOx formation. LNBs can help achieve a 30-50 per cent NOx reduction. In addition, they offer ease of installation and have a proven track record. LNBs have been in use for over 30 years in countries with similar emission control standards. LNB design has improved over the years and today’s ultra-low NOx boilers use advanced methods to reduce emissions. They are designed to control the mixing of air and fuel at each burner, creating more branched and larger flames. They also reduce the peak flame temperature, resulting in the formation of less NOx in the process. The improved flame structure simultaneously reduces the amount of oxygen available in the hottest part of the flame, thereby improving the burner’s efficiency.

An OFA system controls the oxygen availability near the burner area, thereby minimising the formation of fuel NOx. It diverts a portion of the combustion air away from the primary combustion zone. Of the required combustion air, 70-90 per cent is provided near burners, which creates an oxygen-deficient, fuel-rich zone, leading to partial combustion of fuel. Subsequently, the balance combustion air is injected above the burner elevation through OFA nozzles into the furnace, where combustion is completed. The comparatively low temperature of the secondary stage restricts the production of NOx. Another benefit of the OFA system is that higher plant efficiency is achieved by reducing the amount of excess air in the system. The majority of existing boilers in India have stand-alone OFA systems, but they do not operate properly. If appropriately utilised, OFA technology can reduce NOx formation by 20-45 per cent. For optimum NOx reduction, LNBs and OFA systems should be used in combination.

Combustion optimisation is another primary method to control NOx emissions. Often when boilers are subject to frequent load changes and changes in coal quality, there are localised hotspots or temporary periods of incomplete combustion. This increases NOx emissions along with some other emissions and undesirable effects. To control this, combustion optimisation is important. In India, most boilers are tangentially fired and have lower NOx emissions than wall-fired boilers. Moreover, tangentially fired boilers have devices that can tilt the burner through an arc range of -30 to +30 degrees horizontally. Optimising the angle of this burner can also help in controlling NOx emissions. Thus, by controlling the boiler operating parameters (like burner tilt, excess air, coal mill operations, etc.), NOx emissions can be significantly reduced.

In SCR technology, ammonia is used as a denitrification agent. A reagent such as aqueous ammonia, anhydrous ammonia or urea is injected into the exhaust stream, which is maintained at a specific temperature (depending on the catalyst used). The heat vaporises the ammonia. Nitrogen gas and NOx present in the flue gas stream react with vaporised ammonia in the presence of a catalyst (such as titanium oxide, vanadium, molybdenum and tungsten) and form nitrogen, water and trace amounts of carbon dioxide, which are expelled from the exhaust pipe. The reagent is optimised by maintaining a near-equal ratio with the NOx to be removed from the flue gas stream. It is suitable for NOx reduction of about 90 per cent.

However, a disadvantage is that some unreacted ammonia might slip through the catalyst due to overinjection. Also, the catalysts used in the process are prone to contamination by compounds in the combustion gas. Currently, various pilot studies are under way regarding the performance of SCR. These are being undertaken at the Vindhyachal, Rihand, Korba, Simhadri, Ramagundam, Sipat and Kahalgaon TPPs. While the catalyst being used at the Simhadri TPP is the plate and honeycomb type, at other TPPs a play-type catalyst is used.

SNCR is an alternative method for the reduction of NOx emissions. It is essentially a similar procedure. However, the injection of ammonia or urea into the flue gas is carried out without the use of a catalyst. The reagent is injected into specific temperature zones in the upper furnace or convective pass to reduce NOx to nitrogen and water. Pilot studies for SCNR technology are being undertaken at the Rihand and Vindhyachal TPPs. At these plants, four soot blowers were temporarily replaced with SNCR injection lances (two per boiler sidewall). SCR is more efficient at reducing emissions, but it is also significantly more expensive due to the need to purchase and maintain the catalyst. In India, a major problem with these systems is that the arrangement for availability, transportation, handling and storage of such large quantities of ammonia is yet to be addressed by TPPs. 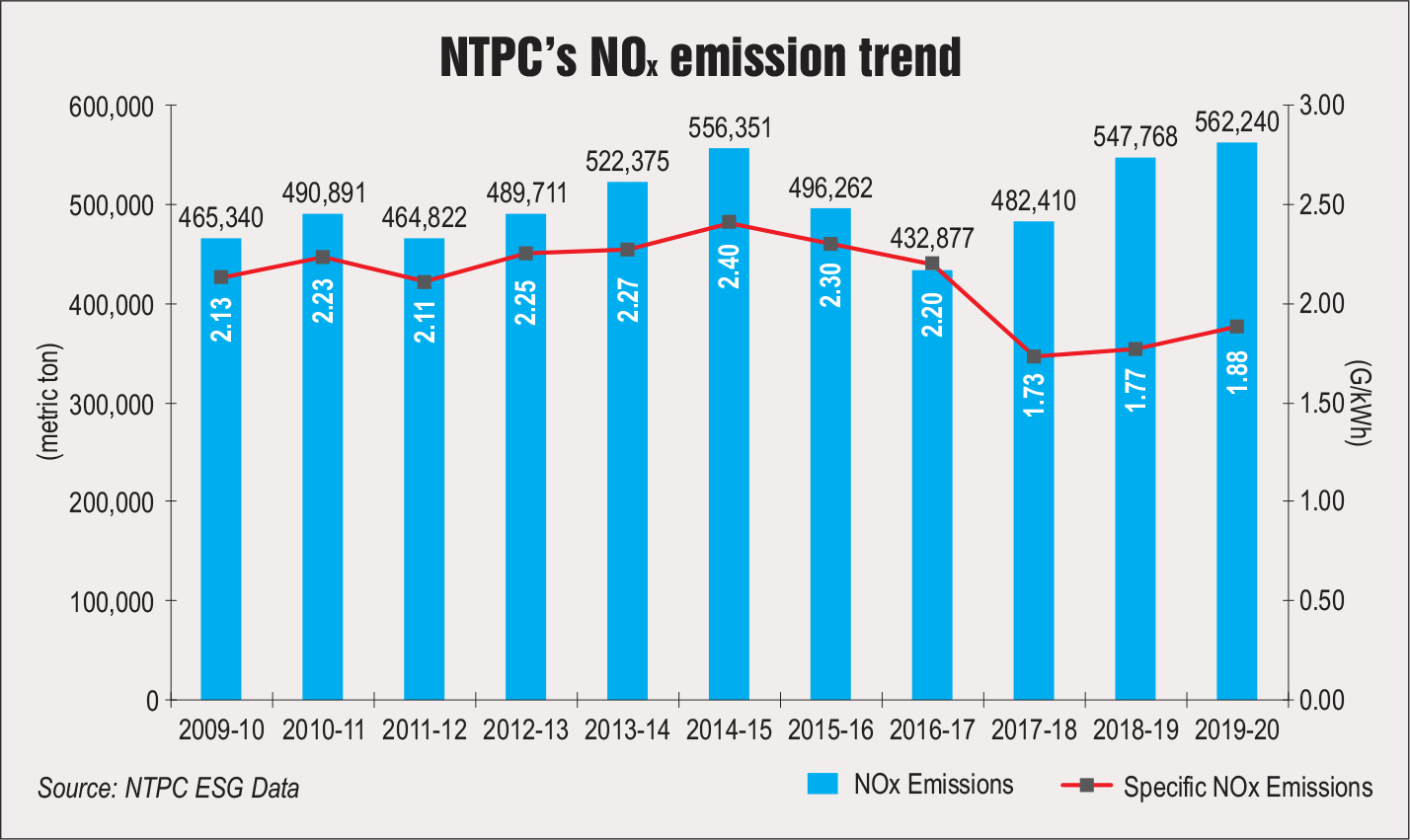 NOx is a pollutant that has many detrimental effects on both human health and the environment. NOx can cause respiratory problems as it can react in air to form airborne nitrate particles or acid aerosols as well as ground-level ozone. NOx also contributes to the formation of acid rain and deteriorates the quality of water by overloading it with nutrients, causing excessive growth of algae. It includes nitrous oxide, a greenhouse gas that contributes to global warming.

Therefore, controlling the emissions of harmful NOx should be prioritised by TPPs. Simple steps such as changing boiler dimensions, installing certain auxiliary equipment such as LNBs or OFA systems, and enhancing fuel quality can be taken to reduce emissions. Meanwhile, complicated procedures such as installation of SCR or SNCR systems can be carried out following pilot studies if test results turn out favourable. Net, net, generation utilities should lay out a firm NOx control plan and start implementation at the earliest.