SENER publishes its detailed annual plan for the electricity sector in PRODESEN as per the specifications of the National Energy Policy and Plan Nacional de Desarrollo 2019-2024 or National Development Plan 2019-2024. The latter is a strategic plan of the Mexico government, which guarantees electricity supply at affordable rates to the entire population of Mexico. It also aims to ensure smooth functioning of the state-owned power company Comisión Federal de Electricidad (CFE) and increase the share of renewable energy in the generation mix.

Under PRODESEN 2021-35, SENER has estimated that power consumption will increase at the rate of 2.8 per cent from 328 TWh to 480 TWh during the period 2021-35. To meet this rising power demand, it aims to add 21,291 MW of generation capacity between 2021 and 2024, of which clean energy sources will have a share of more than 55 per cent. The majority of this generation capacity will be added in the northern region of the country. To strengthen its Red Nacional de Transmisión (RNT) or the National Transmission Network, there are plans to add 1,072 ckt. km of line length and 2,875 MVA of capacity under 19 expansion projects and 14 modernisation projects. In addition, there are plans to add 83 ckt. km of distribution lines and 863 MVA of capacity during the 2021-35 period.

Mexico’s Sistema Eléctrico Nacional (SEN) or the National Electric System comprises nine regions of control and a small isolated electrical system. It includes Sistema Interconectado Nacional (SIN) or the National Interconnected System, which covers seven regions – central, eastern, western, northwest, north, northeast and peninsular. The Baja California Interconnected System is connected to the Western Electricity Coordinating Council of the US via two 230 kV transmission lines. The electricity systems of Baja California Sur and Mulegé are electrically isolated from each other as well as from the rest of the country. Mexico also has two isolated links at 115 kV with Texas, USA, and is connected with Central America via a 400 kV link with Guatemala and a 115 kV link with Belize.

As of end 2020, the country’s power transmission network consisted of 105,885 km of line length and 114,807 MVA of transformer capacity at the 115-400 kV voltage levels. This entire transmission capacity is owned and operated by CFE. Mexico had an installed generation capacity of 83,121 MW, which increased to 89,479 MW by April 2021 with the addition of 3,113 MW of combined cycle power plants, 1,187 MW of wind power plants and 1,876 MW of solar photovoltaic (PV) projects. The country relies mainly on conventional sources of energy to meet its power demand. However, the share of clean energy sources has been increasing over the past few years.

Peak demand in SIN is experienced from June to August every year. Under the planning scenario, the peak demand during 2021-35 will increase at the rate of 3 per cent from 49 GWh per hour to 72 GWh per hour.

The loss of electrical energy during transmission and distribution (T&D) is one of the major challenges faced by suppliers, distributors and operators of an electrical system. The government is putting greater emphasis on reducing these technical and non-technical losses through increased investment in infrastructure, detection and elimination of illicit uses, and the modernisation of measurement systems. With these initiatives, SENER expects to reduce T&D losses to international standards of 8 per cent by the end of 2035 from 12 per cent in 2021.

PRODESEN includes the Programa Indicativo para la Instalación y Retiro de Centrales Eléctricas (PIIRCE) or Indicative Programme for the Installation and Removal of Power Plants, under which SENER has planned a power generation network for the studied period.

SENER has set a target to achieve a 30 per cent share of clean energy sources in the generation mix by 2021, and increase it further to 35 per cent by 2024. Following this, under PIIRCE, 21,291 MW of new generation capacity will be added during 2021-24. This will increase the share of clean energy sources in the energy mix to 55.5 per cent from the current share of 20 per cent. The country will also invest in hydrogen turbines, energy storage capacity, solar projects, ocean energy, etc. During the same period, 1,331 MW of thermal power plants will be replaced by flexible natural gas-based power plants.

SENER also plans to pursue the development of CFE power plants, for which the incorporation of combined cycle plants is proposed for the medium term. For the long run, the focus will be on the habitation and modernisation of some operational hydroelectric plants. 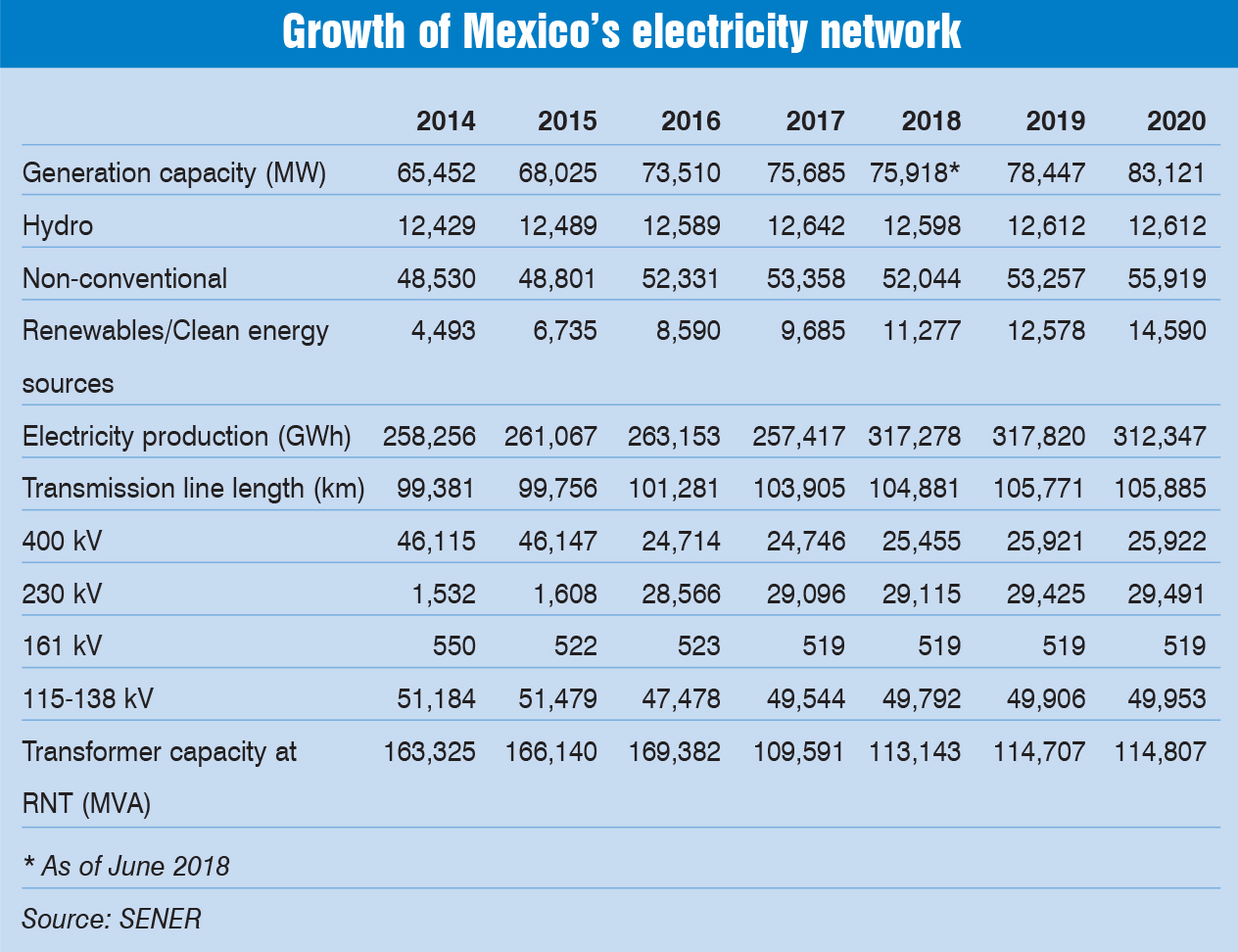 SENER had allotted 144 projects to CFE Transmission for the expansion and modernisation of the national transmission network to be executed during 2015–21. Of these, 35 projects entail the construction of transmission lines, 43 projects are for the installation of transformation banks in RNT, 37 include reactive power compensation equipment and the remaining 29 include modernisation projects. As of June 2021, CFE completed four expansion projects of RNT, whereas five projects were cancelled, and four projects were put on hold.

The remaining 131 projects, which entail 3,349.7 ckt. km of line length and 13,158 MVA of transformer capacity, will be operationised during the period 2021-26. The majority of the line length capacity will be constructed in the states of Baja California, Hidalgo, Guanajuato, State of Mexico and Quintana Roo. In addition, 40 ckt. km of existing 400 kV transmission lines and 71.3 ckt. km of 115 kV transmission lines will be modernised in the states of Veracruz, Puebla, Durango and Sinaloa during the period as well as 1,661.6 MVA of transformer capacity in the states of Baja California, Coahuila, Nuevo León, Tamaulipas and Veracruz.

To support this transmission network expansion, 91 power distribution projects including 417.5 ckt. km of medium voltage transmission lines and 2,681.3 MVA of transformers are expected to come into operation during 2021-26 at the 69-115 kV voltage levels, which will be connected to RNT. The majority of the line length and transformer capacity will be added in the Chihuahua, Chiapas, Tabasco, Jalisco and Hidalgo regions. 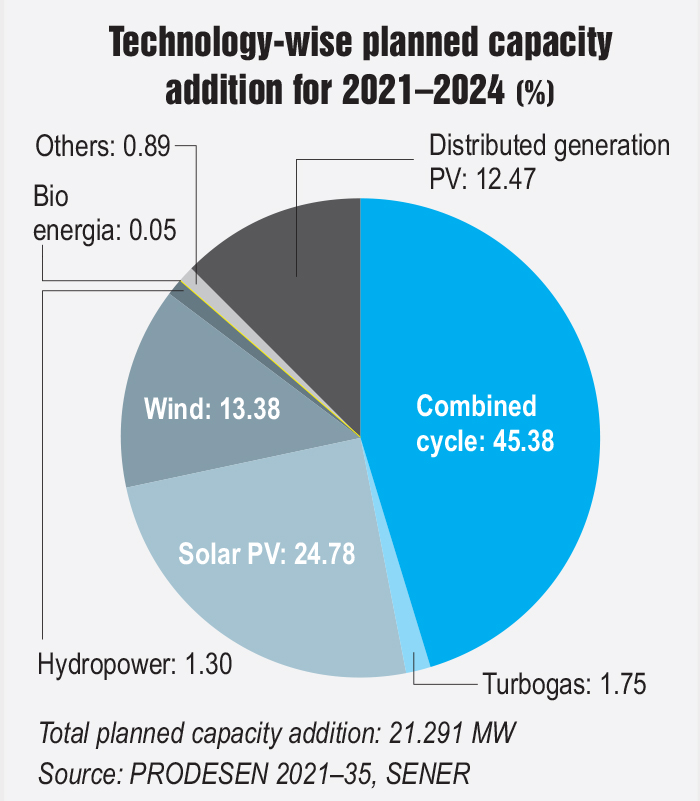 A total of 2,850 MVAr of dynamic reactive power compensation capacity has also been planned for the period 2021-35. The majority of the upcoming generation projects, especially renewable energy-based ones, will be installed in the northern region of the country. To transmit this excess generation to the north-eastern and southern parts of the country, additional transmission capacity is required. In view of this, the largest transmission project has been planned under PRODESEN 2021-35. It includes the 400 kV Choacahui-Culiacán Poniente-Mazatlán Dos-Tepic Dos-Cerro Blanco line projects, which will have a combined line length of 782 ckt. km, transformer capacity of 600 MVA and reactive capacity of 250 MVAr. It will benefit the northern, north-eastern, north-western and western regions of the country.

The 400 kV Texcoco-Teotihuacán line and associated works have been planned to meet the growing demand of Mexico City. Some other key projects are the Cerro Blanco-Vallejo line and associated works in the states of Nayarit and Jalisco; 230/115 kV augmentation of transformation capacity in the Querétaro area; and 115 kV modernisation of the Tecamachalco transmission line, 73690–Tlacotepec line in Puebla City.

In addition, three transmission projects are under study for PRODESEN 2022-36. These include the Chihuahua-Camargo-La Laguna project, which will entail the construction of 470 ckt. km of line length along with the addition of 300 MVAr of reactor capacity in the Chihuahua, Camargo and La Laguna areas of Chihuahua, Coahuila and Durango states. It will transfer power from the northern region to the north-eastern region of the country.

A total of 28 Redes Generales de Distribución or General Distribution Networks projects at 69-115 kV have been identified in PAMRNT, with a line length capacity of 82.9 ckt. km. These will be developed in the states of San Luis Potosí, Tamaulipas, Sonora, Veracruz, Sinaloa, Baja California and Tabasco, and will be connected to RNT. A transformer capacity of 862.5 MVA and reactive power capacity of 51.8 MVAr has also been planned for the distribution network under the same.

The Mexican government has been focusing on strengthening the country’s power network, increasing the share of renewable energy in the generation mix, and improving the operational and financial health of CFE. However, several policy announcements in the recent past have cast doubts over the achievability of these targets.

In March 2021, the government published a decree to amend the various provisions of the Ley de la Industria Eléctrica or Electricity Industry Law to take greater control of the electricity market. These amendments include changing the despatch rules, giving priority to the generation of CFE regardless of its cost, changing the rules for the issuance of clean energy certificates and self-supply contracts, and allowing the government to review basic supply contracts. This has drawn severe criticism from the private sector and analysts. According to market experts, these moves will increase the cost of electricity for end users as they favour the non-clean and expensive power plants of CFE and hurt the profitability of privately owned generation plants.

It is also likely to reduce private investment in the country’s power generation sector and increase the investment burden on CFE. This in turn is expected to hamper the utility’s ability to fund projects in its T&D business, which is already suffering due to the poor operational and financial health of CFE.

The government continues to maintain CFE’s monopoly in the transmission sector. In 2019, it cancelled the auction of two major high voltage direct current (HVDC) transmission projects – the ±500 kV Ixtepec-Yautepec and the ±500 kV Baja California-Sistema Interconectado Nacional (SIN) interconnection projects – after investing considerable time and money in finalising the terms and conditions to offer attractive opportunities for private investment. The government now plans to focus on strengthening the transmission network at 400 kV and below, and upgrading the existing network, instead of investing in new and large networks.

Amidst Covid-19 and slow GDP growth, the country requires funds to support the economy. Further, the government needs to ensure regulatory stability for the growth of the electricity sector.