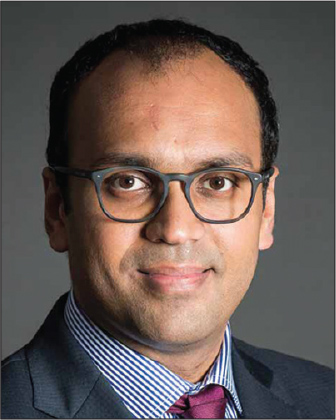 The latest Intergovernmental Pa­nel on Climate Change Report, released in August 2021, has issued code red for human-driven global heating. As per the report, if global carbon emissions are not checked right now, a climate catastrophe in the near future will be unavoidable. However, there still is a ray of hope. Although humans are one of the prime reasons for this global threat, humans and their responsible actions are the only solution to address this.

Today, electricity is a critical underpinning need of the modern lifestyle – a fact that has been reiterated more than ever by the onset of the Covid-19 pandemic. With more and more people getting connected to the grid round the clock, there is a steep increase in power demand. Moreover, despite recent advances in electrification, nearly 2 billion people globally still do not have access to electricity. Addressing these requirements by leveraging the existing power portfolio will mean burning more fossil fuels and aggravating another worldwide crisis – global warming.

Energy from renewable energy sources such as solar and wind is the obvious solution, but these sources have their own set of challenges; the sun doesn’t shine round the clock and the wind doesn’t blow all the time. In fact, at the time when electricity demand peaks in the evening, the sun has already set.

One solution is to improve battery technology to store the surplus energy, but this is still a while away. There is another possible solution. After all, when the sun sets in India, it shines brightly over another country, which possibly receives more solar energy than is needed for its consumption at that mo­ment. So, that brings us to an interesting question – can one country’s sunshine light up homes in another country?

With an intercontinental grid, one country’s sunshine could light up homes in another country. It would not only expedite the energy transition but would also lead us to a cleaner future.

At its essence, it sounds simple – power lines connecting various countries, potentially evolving into one giant global grid. This should not be unfathomable. After all, the world has al­ready done this for telecom and internet connectivity. Under­sea internet cables transport gigabytes of data from one continent to another. Even thinking of physical goods, there are intercontinental oil pipelines, stretching as far as 4,000 km.

It might seem like the next logical step to have an intercontinental grid that leverages the time difference between countries to inject surplus renewable energy from one country’s grid to another that needs it. This is theoretically achieved by connecting the right points across the globe to service demand in others by following the sun or the cyclicality of renewable en­ergy sources such as wind.

For example, when India hits peak energy demand at around 6 p.m., the sun is likely to be shining bright in the Arabian co­un­tries. The GCC (Gulf Coordination Committee) can feed India’s power demand through a subsea link from Oman to Porbandar in Gujarat.

If one does the maths, it’s not very expensive, either. The cost of the GCC-India interconnection via subsea cable is estimated to be $3.5 billion for a 3 GW link. The cost per unit of power transmitted over this link could be lower than Rs 2 ($2.5 cents per unit) with innovative usage of this link for power transfer between countries.

You might be able to work out then that when the sun shines brightly over India, the beneficiary will be eastward countries such as Vietnam and Myanmar, not to mention morning peak demand in GCC countries.

India, with its significant potential for generating renewable power – solar, hydro and wind – stands to gain much as the harbinger of OSOWOG

It is exciting to think of what this could lead to. This could pave the way for a new green power corridor for the world along the sunshine tropical countries, much like how the ancient Silk Route helped establish East-West trade routes, and how the 21 km long Strait of Hormuz sees 20 per cent of all the world’s oil passing through it.

For long, the world has been speaking of the power of Asia; this would be a way to literally manifest it. Not to mention this will lead to increased diplomacy between all states concerned. It is also exciting to think about how this could extend to other areas of the globe, particularly the perennially underelectrified African countries, for which this could act as a vital source of revenue as well. If we could connect all countries across the solar-blessed Tropic of Cancer, then India’s vision of establishing One Sun, One World, One Grid (OSOWOG) could come true. The sun would never set for any country. 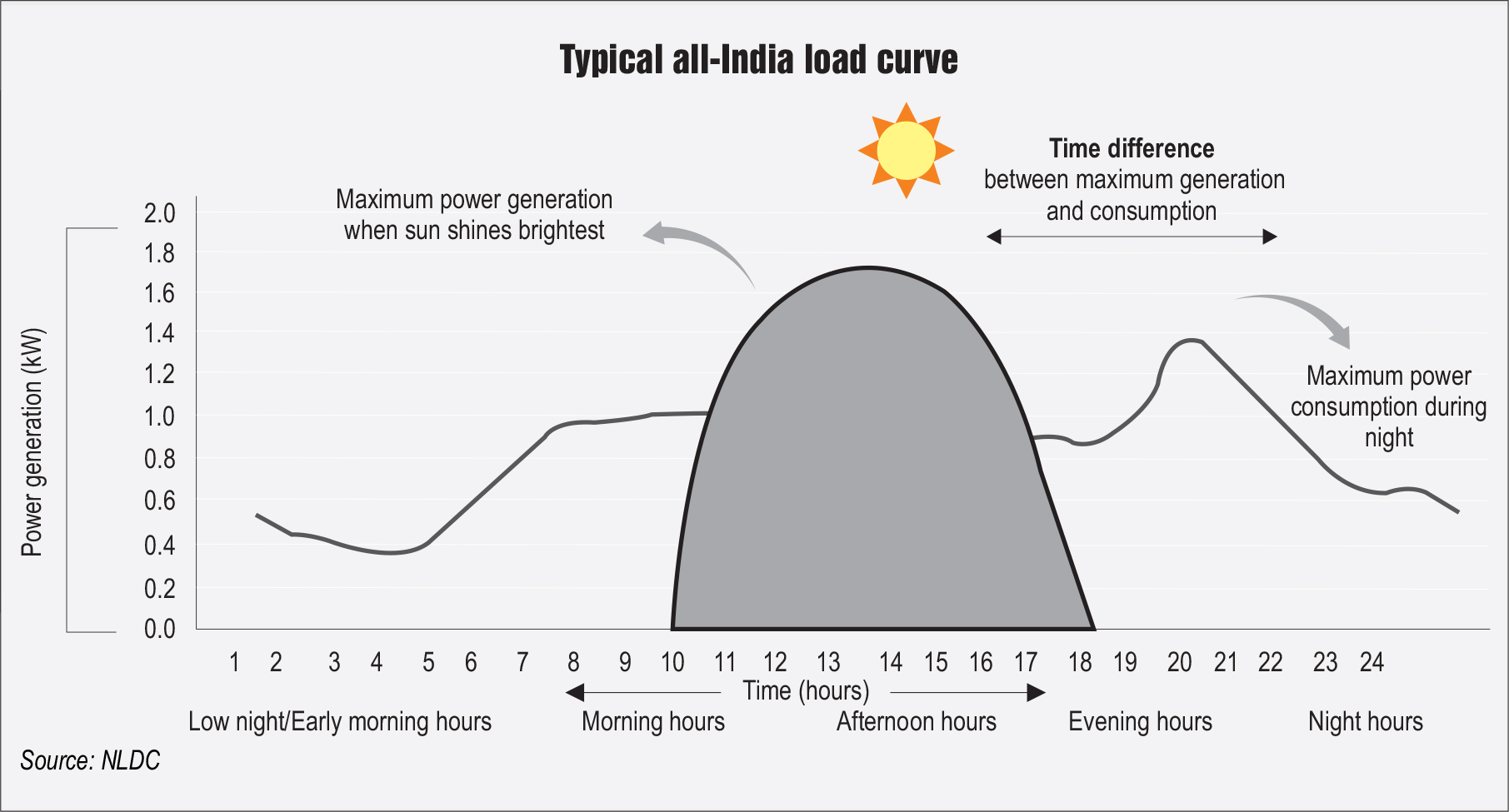 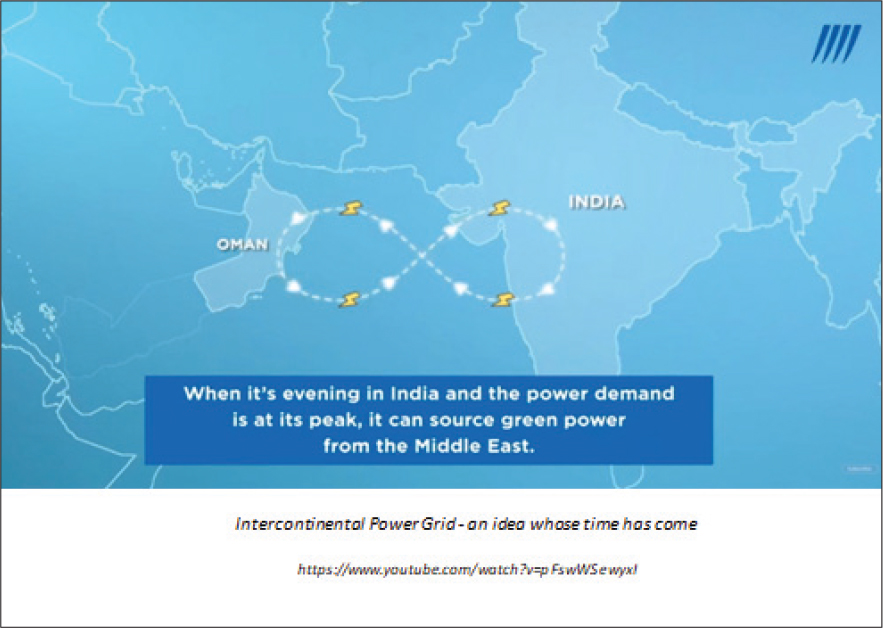 An intercontinental grid brings with it several direct and indirect benefits. Primary, of course, is complete electrification; everyone on the planet would have reliable 24×7 power. This brings with it socio-economic benefits to all – from providing education and entertainment to individuals, to boosting agriculture and industrial production, and providing an impetus to trade- and commerce-related opportunities.

There are many countries that do not receive optimal sunlight. Hence, the only option for them is to invest in fossil fuel-based power generation sources. With an Intercontinental Grid, these investments can be directed to other critical sectors such as healthcare.

The electricity sourced through an intercontinental grid wou­ld be green, hence reducing the impact on the planet and add­ressing climate change. Furthermore, this paves the way for stronger diplomatic relations between countries. India, with its potential for generating renewable power – solar, hydro and wind – stands to gain much in this regard as the harbinger of OSOWOG.

An intercontinental grid will not only expedite energy transition but will also lead us to a cleaner future. Let us work together and build a safer home  for our future generations.