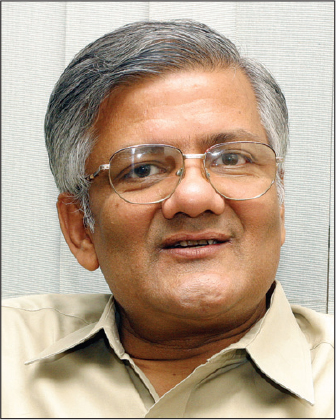 After setting ambitious targets for solar energy development, the government also turned its attention to harnessing small-hydro projects, aiming and planning to set up 5,000 MW of small-hydro projects in the next five years. Small-hydro is the classification used for hydropower projects below 25 MW capacity, their distinguishing attri­bu­te being that they are mostly run-of-the-river type and do not require the construction of dams. Thus, apart from the fact that electricity is generated from a renewable source, small-hydro projects have a far less impact on the environment.

Small-hydro has the potential to benefit local people and autho­rities in places where grid connectivity is not economical and often even neglected. These facilities have no significant geological or environmental impacts, and will normally have a guaranteed discharge (and production rate) throughout the year. There are fewer land acquisition hassles, and these projects could be maintained and run by local bodies, which can later take ownership of them. Small-hydro projects have no major rehabilitation and resettlement (R&R) issues as compared to large hydro or coal-based power plants, for which relocation and resettlement of the displaced people is a major concern.

India’s total small-hydro-power (SHP) potential is estimated at about 19,749 MW. The state-wise potential, as per the Ministry of New and Renewable Energy (MNRE), is given in Fig. 1. 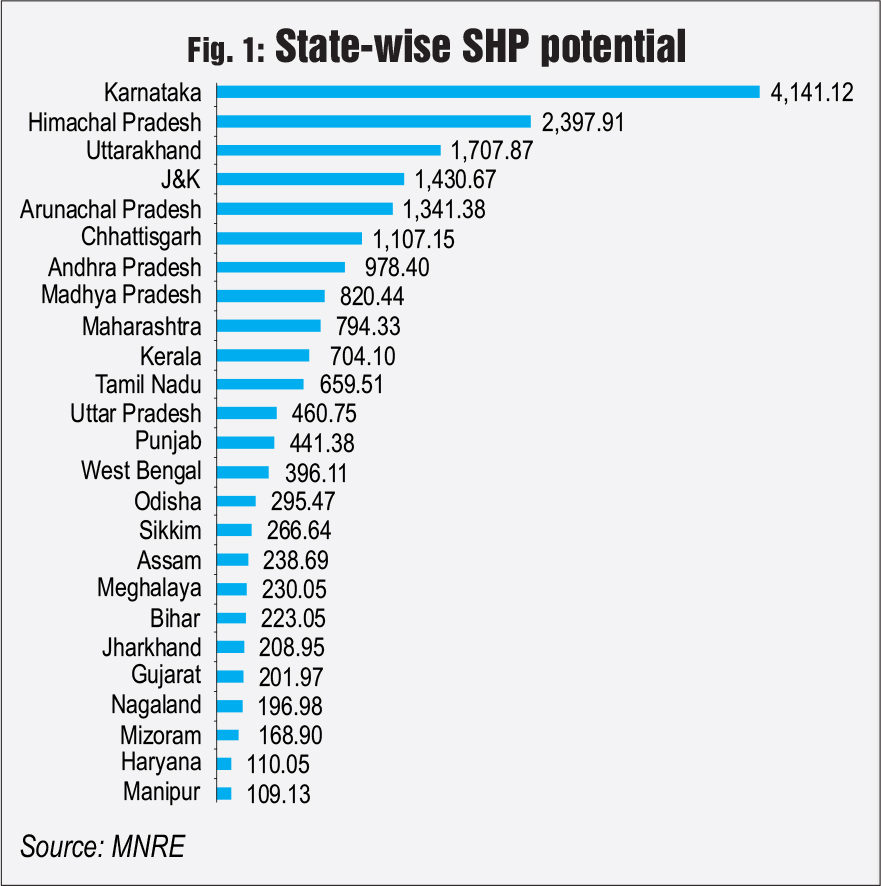 On analysing the top five states with the maximum SHP potential and installed capacity, it can be seen that less than 20 per cent of the potential capacity has been utilised. This is despite the fact that small-hydro projects posit various implementation advantages (see Fig. 2).

This is because the potential small-hydro project sites (a total of 6,474 potential sites have been identified) are located in remote places, far from demand centres, and evacuating power from these remote locations to the nearest grid requires investment in transmission lines over undulating and difficult geographies, increasing the cost of transmitting such power. Also, as these are remote locations, with limited facilities around project sites, they are inaccessible via proper transport routes, thereby increasing the cost of transporting construction material and for operations and maintenance. Further, obtaining statutory clearances is a time-consuming process, involving techno-economic clearances (based on detailed project reports [DPRs]) from state electricity authorities, allotment of land by state revenue departments, provision of water rights by state irrigation departments, and the most time-consuming – forest and environmental clearances from concerned authorities. Apart from these clearances, some states also demand no-objection certificates from the fisheries department and the state pollution control board.

Considering these challenges, the MNRE has been providing financial support/ subsidies on activities such as resource ass­ess­ment, detailed survey and investigation, DPR preparation and perspective plans for states. Financial support is also be­ing provided for research and development, human resource development, strengthening of technical institutions, capacity building and setting up of turbine laboratories. Prima facie, the governmental support is more towards pre-project development activities and less towards implementation. 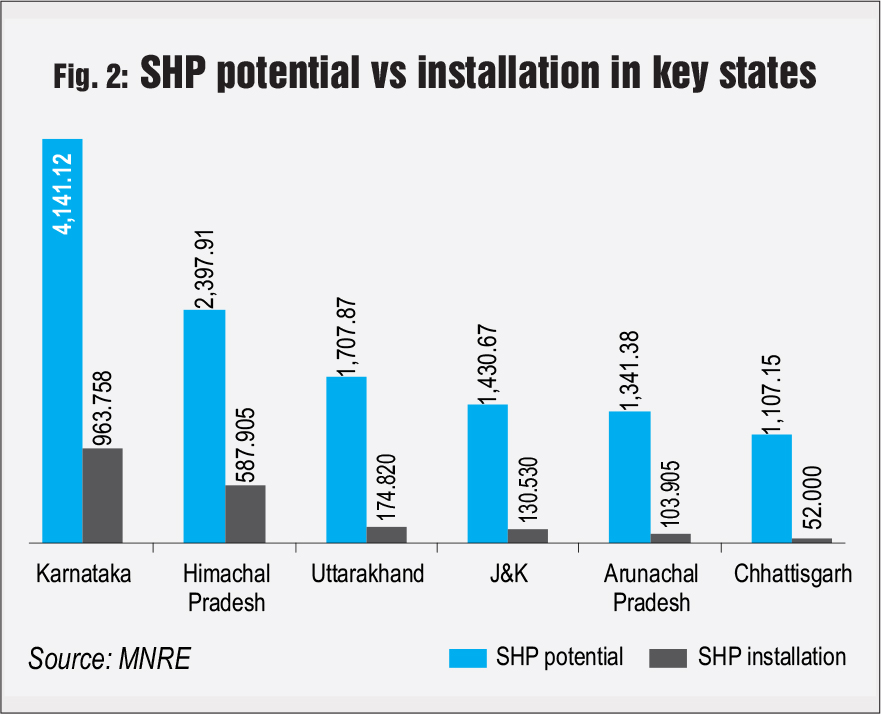 The construction and commissioning periods of such projects are claimed to be shorter than those of other non-renewable or even large hydro projects. However, pre-project development activities include surveys and investigations, feasibility studies and DPRs, designs and drawings, and financial closure and finalisation of contracts. These take nothing less than 15-18 months to complete, almost two years from conceptualisation. Moreover, because of fewer civil works required for these projects, they claim to have lower initial investment costs, thereby reducing payback periods. But, in practice, it has been found that the capital costs, expected to be Rs 50 million-Rs 60 million per MW, remain so only in perception, as costs increase quite often to nearly Rs 100 million per MW.

Apart from construction costs, there are other hard costs that need to be understood. Local area development funds, environmental monitoring plans, catchment area treatment plants, a percentage of free energy to states, forest fees and charges (compensatory afforestation and reclamation plans), cost of transportation uphill and downhill, etc., all add to the capex of small-hydro projects.

Considering the high capex, the levellised tariff expected from small-hydro projects operating at plant load factors of 45 per cent still hover between Rs 4.50 and Rs 5 per kWh, which appears to be on the higher side compared to other renewable sources. Nevertheless, it is worthwhile to go ahead with harnessing the SHP potential as, once operational, this is a reliable source of electricity, with minimal annual costs. Over time, the compound annual growth rate on investments beco­mes lucrative.

All said, small-hydro projects have the advantage of generating economically sustainable power, and 80 per cent of the total po­t­ential is still unexploited. Small-hydro projects should be favo­u­red by states, owing to their ability to provide power to remote areas. The state governments need to immediately pick the low-hanging fruits of identified sites, and identify projects that can be developed quickly and at economical costs, and streamline and expedite statutory clearances. This will provide a quick impetus to optimise the utilisation of the small-hydro potential.

Land acquisition and R&R issues (although minimal in this case) are state specific, and state policies need to be reviewed to promote the development of small-hydro projects. Incen­tives and sops for small-sized projects and local area development could be provided to encourage investments in this segment. States could, for a start, adopt Himachal Pradesh’s pol­icy with respect to hydropower development, which is one of the best in the country.

The government should also work towards reducing the time required for pre-project development activities. Techno-economic clearance may be hastened, either by developing a me­chanism wherein studies are monitored by an approving agen­cy, or by allowing multiple agencies to provide techno-economic clearance. Public-private-partnerships or joint ventures with state governments may be encouraged and promo­ted for faster clearances and execution of such projects.

To avoid geological surprises and facilitate quicker implementation of projects, detailed route surveys and feasibility studies for assessing transmission connectivity may be conducted for all identified project sites, in order to assess project costs and then identify low-hanging fruits.

All the measures mentioned above have the potential to en­courage and boost investments in the small-hydro segment. Further, it is imperative for all stakeholders to foster growth in this segment by complying with environmental regulations, optimising project incentivisation and benefit sharing, and enabling strong knowledge and information sharing among various stakeholders.

While on this subject, I would also like to suggest that all hydro projects, irrespective of size, should be brought under the definition of “renewables”, and the mandatory proportion of re­newable energy for discoms and industrial consumers should be increased to achieve healthy targets for pollution control. I also hold the view that the existing thermal generation units should be asked to take adequate pollution control measures and then encouraged to generate at optimal capa­city, in order to bring them out of distress. Once economic activities pick up after the current phase, the country will re­quire more and more electricity. Demand will also increase in our friendly neighbourhood, and these countries could draw power from India.