The Government of India is strongly focused on increasing investment in infrastructure development in the country. Towards this end, the National Infrastructure Pipeline (NIP) envisages an infrastructure investment of Rs 111 trillion over a five-year period from fi­nancial year 2020 to 2025. The power sector is expected to account for about 12.6 per cent of this investment with the central, state and private sectors, lining up a capex of about Rs 14 trillion from 2020 to 2025.

For funding the NIP, the government is fundamentally considering three main sources – budgetary, private or extrabudgetary – besides innovative and alternative financing sources. As per the NIP’s Task Force report, about 18-20 per cent fi­nancing needs are expected to be met th­rough the centre’s budgetary resources and 24-26 per cent through states’ budgetary resources. Another 40 per cent is proposed to be raised through extrabudgetary resources/private sector investment and about 15-17 per cent of the outlay is to be met through innovative and alternative initiatives, wherein asset mo­ne­tisation has been suggested as a tool to monetise operational assets at both central and state levels.

In this way, the government has deci­ded to monetise core infrastructure assets in sectors such as roads, power, telecom, ports, warehousing, mining, aviation and railways from financial year 2021-22 to 2024-25 un­­der the National Mone­ti­sa­tion Pipe­line (NMP), which was announ­ced in the Union Budget 2021-22. In August 2021, NITI Aayog, which was tas­k­ed with the creation of the NMP for brownfield core infrastructure ass­ets, came out with a report on the subject, de­tailing the procedure as well as the as­set pipeline for various sectors. As per the report, asset monetisation would essentially entail a limited period licence/lease of an asset, owned by the government or a public authority, to a private sector entity for an upfront or pe­riodic consideration. As per the re­port, the aggregate asset pipeline over financial years 2022-25 under the NMP is indicatively valued at Rs 6 trillion. The top five sectors (by estimated value) ac­c­ount for nearly 83 per cent of the agg­regate pipeline value. These are roads (27 per cent), railways (25 per cent), power (15 per cent) (with po­wer transmission having a share of 8 per cent and generation of 7 per cent), oil and gas pipelines (8 per cent), and telecom (6 per cent).

As of March 31, 2021, the transmission asset base in terms of the network length in India, had a total length of 441,821 ckt. km, growing at a healthy compound annual growth rate of 5-7 per cent since 2015. The shares of the centre, states and private sector in the overall length of the transmission lines were 38 per cent, 54 per cent, and 8 per cent, respectively. 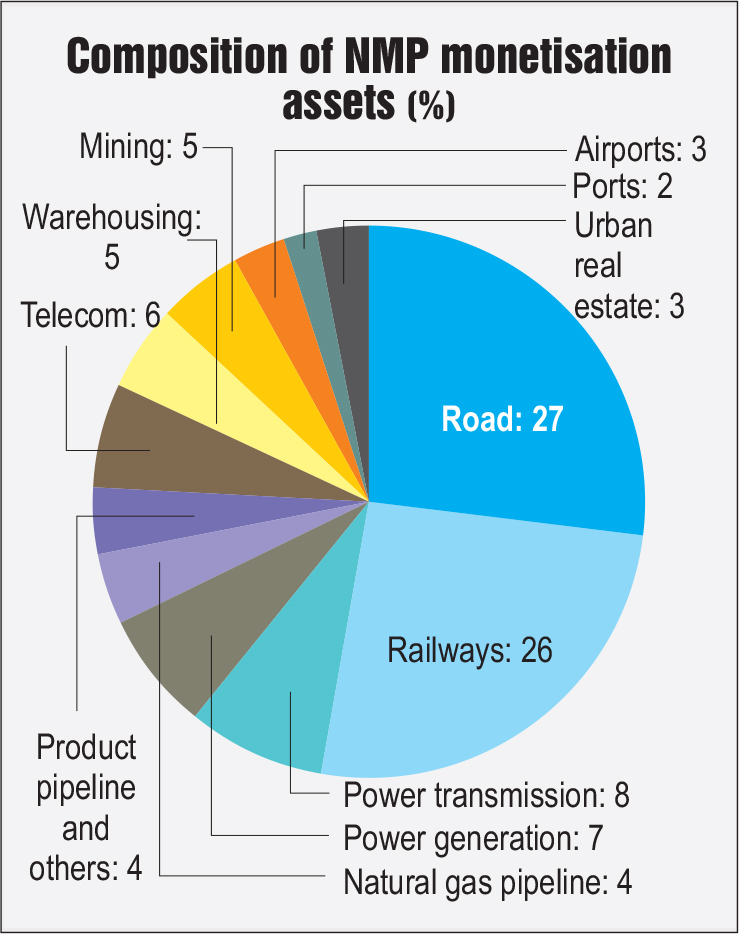 For Powergrid’s cost-plus assets under the regulated tariff mechanism (RTM), the ToT mo­d­el is likely to be adopted. The­se assets are tariff contracts, where tariffs are set on the basis of regulated re-turn on equity invested, which is re-exa­mi­ned every five years. Typically, such assets are housed in the parent entity’s balance sheet and not under separate special purpose vehicles and therefore, transferring them to another entity will necessitate a scheme of arran­ge­ment/ demerger process. A scheme of demerger process will entail expenditure on many transaction overheads such as continuation of tax holiday on assets, capital gains tax, stamp duty, etc., due to asset transfer. Therefore, it is probable that these assets will be monetised using the ToT model, where assets are split from the parent entity and demerged into an individual entity. These entities are then responsible for their own operation, revenue, profit and expansion, without any external intervention. The government can also choose to lease these demerged entities to concessiona­ires for a specified period of time, wherein the concessionaire will pay upfront to acquire tariff rights from these transmission assets, while also as­suming the operational and maintenance cost.

Cost-plus RTM assets account for 95 per cent of the assets by value and, therefore, will account for Rs 429 billion of the total assets that are in contention for mo­netisation. Monetising these RTM assets will liberate the government and Powergrid from concerns relating to their maintenance and repair, providing access to a lot of cash.

The government plans to monetise 6 GW of power generation assets for Rs 398.32 billion. The hydroelectric power plants (HEPs) will comprise 3.5 GW of assets to be monetised and renewable energy will comprise the rest of the assets. The value of generation assets will account for 7 per cent of the total assets expected to be mo­netised under this programme. The generation asset base considered for monetisation constitutes a share of about 6 per cent of the total generation capacity under central public sector undertakings (PSUs). Key entities whose assets have been considered are NHPC Limited, NTPC Limited and SJVN Limited, which own the bulk of the hydel assets as well as certain renewable assets of NTPC and the Neyveli Lignite Corporation.

The monetisation of the power generation assets is expected to garner inves­tor attention because of various steps taken by the government to re­form the weakest link in the power sector – distribution. Some initiatives include liquidity support worth Rs 1.3 trillion for discoms through the Power Finance Cor-poration and the Rural Electrification Corpora­tion, directive to all regulatory bodies to ensure cost-reflective tariffs and measures to ensure sanctity of contracts. Additionally, all assets that are targeted for monetisation are renewable and therefore eligible for environmental, social and governan­ce (ESG) investment. Monetisation of coal and gas assets has not been considered during the NMP period as the interest of global investors in these assets is limited by the strict ESG guidelines under wh­ich they operate and the uncertain long-term potential of the assets.

Hydro assets have been chosen for monetisation as they are more amenable to it, as the offered flexibility in operations and their renewable nature renders them eligible for meeting renewable pur­chase obligations for states. Further, hy­dro assets operating under a regulated tariff regime provide a degree of predictability to investors on the return on their invested capital.

The government plans to monetise around 25 per cent of the targeted generation assets, that is, 1,488 MW of assets in 2021-22 and 2022-23. The rest of the assets will be phased out in 2023-24 and 2024-25. The book value approach has been adopted to determine an indicative value of the above-mentioned assets, varying based on the vintage value of the asset. The average realisation value for HEPs has been tentatively considered as Rs 75 million per MW and the average realisation value for solar assets has been tentatively considered as Rs 55 million per MW. The product of assets considered for monetisation (in MW) and the above-mentioned book value of assets are used to compute the annual indicative monetisation value for assets in each subsector, such as solar, HEPs and wind power plants

The policy of monetising generation and transmission assets will provide the government much-needed access to capital over the medium term, which, in turn, will be reinvested to develop and widen its asset base in the power and other infrastructure sectors. The NMP, pioneered by the government, is a pragmatic strategy to amass capital and provides an opportunity to PSUs to avail of the benefits of new financial instruments for tapping capital from private sector investors. The process will help PSUs in easing fiscal constraints and freeing up balance sheets for more greenfield infrastructure creation and de­ployment of financial resources to­wards the social sector and other competing public priorities.