Captive power plants (CPPs) are vital for industries to meet their energy needs. While peak power and en­ergy deficits in the country have reduced over the years facilitating electricity supply to industries, the tariffs for commercial and industrial (C&I) consumers re­main high and quality of power is also an issue. In addition, power consumption from CPPs is exempt from cross-subsidy surcharge (CSS) as per Section 42 of the Electricity Act, 2003. Meanwhile, electricity procured through open access is comparatively uncompetitive as it is subject to CSS, additional surcharge, wheeling and other charges.

To analyse different trends, India Infra­structure Research tracked over 72 GW of captive capacity. Plants having a unit rating of 100 MW or more were reported to have contributed the majority of the CPP capacity. Metals and minerals ac­counted for the maximum share of about 37 per cent captive capacity in India’s end-use industry. Due to their energy-intensive production processes, industries including aluminium, copper, and iron and steel have some of the lar­gest CPPs. Other significant captive consumers are sugar, cement and petrochemicals industries.

The majority of captive capacity (about 57 per cent) used coal as a fuel including domestic coal, imported coal, and/or a blend of coal with coal washery rejects, pet coke and lignite. Coal-based CPPs have grown in popularity owing to their low capital costs and ease of installation on a broad scale. Due to economies of scale, coal-based CPPs are preferred by sectors such as metals and mining, cem­ent, petrochemicals and group captives.

Wind and bagasse accounted for shares of 8 per cent each in the tracked capac­ity, while natural gas and solar accounted for shares of 6 per cent and 4 per cent, respectively. Although the share of solar in the tracked capacity is currently small, it has grown over the years – from nearly zero during 2014-15 – mainly owing to the fall in the capital cost of modules and ample policy focus on renewables coupled with increasing re­newable purchase obligation (RPO) targets. So­lar-based captives also render a “gre­en image” to energy-intensive high-emission industries.

Odisha and Gujarat are the dominant states in terms of captive capacity, accounting for the majority of the country’s captive capacity with 16 per cent and 11 per cent shares respectively in the total tracked capacity. Gujarat is home to a number of petrochemical firms, inclu­ding the Indian Oil Corporation, Relian­ce Industries, and the Essar Group, as well as textile firms such as Aditya Birla Nuvo and Raymond. Owing to a well-de­veloped city gas distribution network and a significant wind potential, these businesses have established a number of CPPs based on gas and wind. In order to address the needs, a number of metals and mining businesses in Odisha, in­clu­ding Vedanta, the National Alumi­ni­um Company, Jindal Steel and Power, and Steel Authority of India Limited, have built large-scale coal-based CPPs. Tamil Nadu, Maharashtra, and Karnata­ka are some of the other states with significant CPPs. Due to the sheer number of sugar mills in the state, Uttar Pradesh has the most bagasse-based CPPs.

The group captive model is becoming a popular choice for industries, particularly smaller ones, looking for a reliable electricity supply without having to in­vest as much capital as independent captive plants. Group captives are captive power projects set up by industry/ industries for collective use by multiple industrial or commercial consumers who have a 26 per cent equity in the project and must consume 51 per cent of the power produced, as per the Elec­tricity Rules, 2005.

A key benefit of a group captive model is that CSS and additional surcharges are not levied on the power procured by different consumers. Typically, a developer sets up the group captive project under a special purpose vehicle (SPV) com­­pa­ny and offers 26 per cent equity to the consumer/s. Further, an agreement is signed to buy back the shares on the termination of the procurement contract.

Of the total tracked capacity, group captives accounted for a share of 4 per cent with the majority of capacity located in Tamil Nadu, Gujarat and Maharashtra. 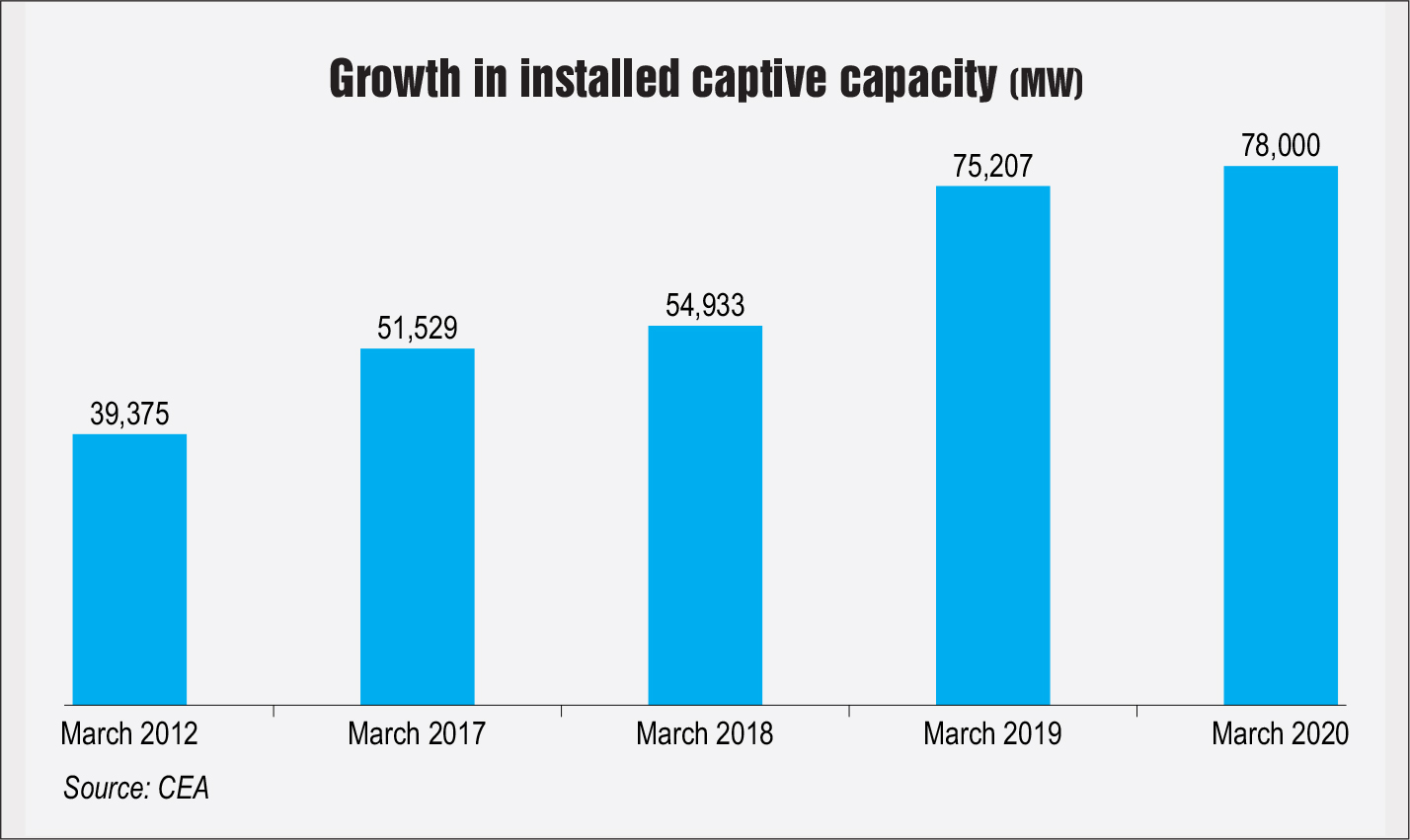 In October 2021, Tata Power and Tata Steel announced to jointly develop 41 MW capacity of grid-connected solar plan­ts in Jharkhand and Odisha. A 21.97 MWp photovoltaic (PV) project will be set up at Jamshedpur and a 19.22 MWp one will be set up at Kalinganagar. At Jam­shedpur, Tata Power will develop rooftop PV with 7.57 MWp capacity, wh­ile floating and ground-mounted capacity would be 10.8 MWp and 3.6 MWp respectively. The ground-mounted PV will be installed at Sonari Airport, Jam­shed­pur. Kalinganagar will have 9.12 MWp rooftop PV capacities, and floating PV will constitute 10.1 MWp. The companies have signed a 25-year power purchase agreement (PPA) for the project. Earlier, in March 2021, the two companies had announced to develop a 15 MW solar project at Jamshedpur. It is expected to generate an average of 32 MUs of energy per year, thereby helping to offset around 25.8 million kg of carbon dioxide annually. In 2017, Tata Power Solar commissioned a 3 MW solar PV power plant in Tata Steel’s iron ore mine at Noa­mundi. This was the first solar power plant of its kind at any iron ore mine in the country.

In July 2021, Mahindra & Mahindra ad­opted a 58 MWp captive solar plant at Parbhani, Maharashtra. It is clai­med that the plant will generate 100 MUs of power annually from 2022. The solar plant will be set up on a build-own-operate basis (for a period of 25 years) by ReNew Sun­light Energy Private Limited, a wholly owned subsidiary of ReNew Power Pri­vate Limited. 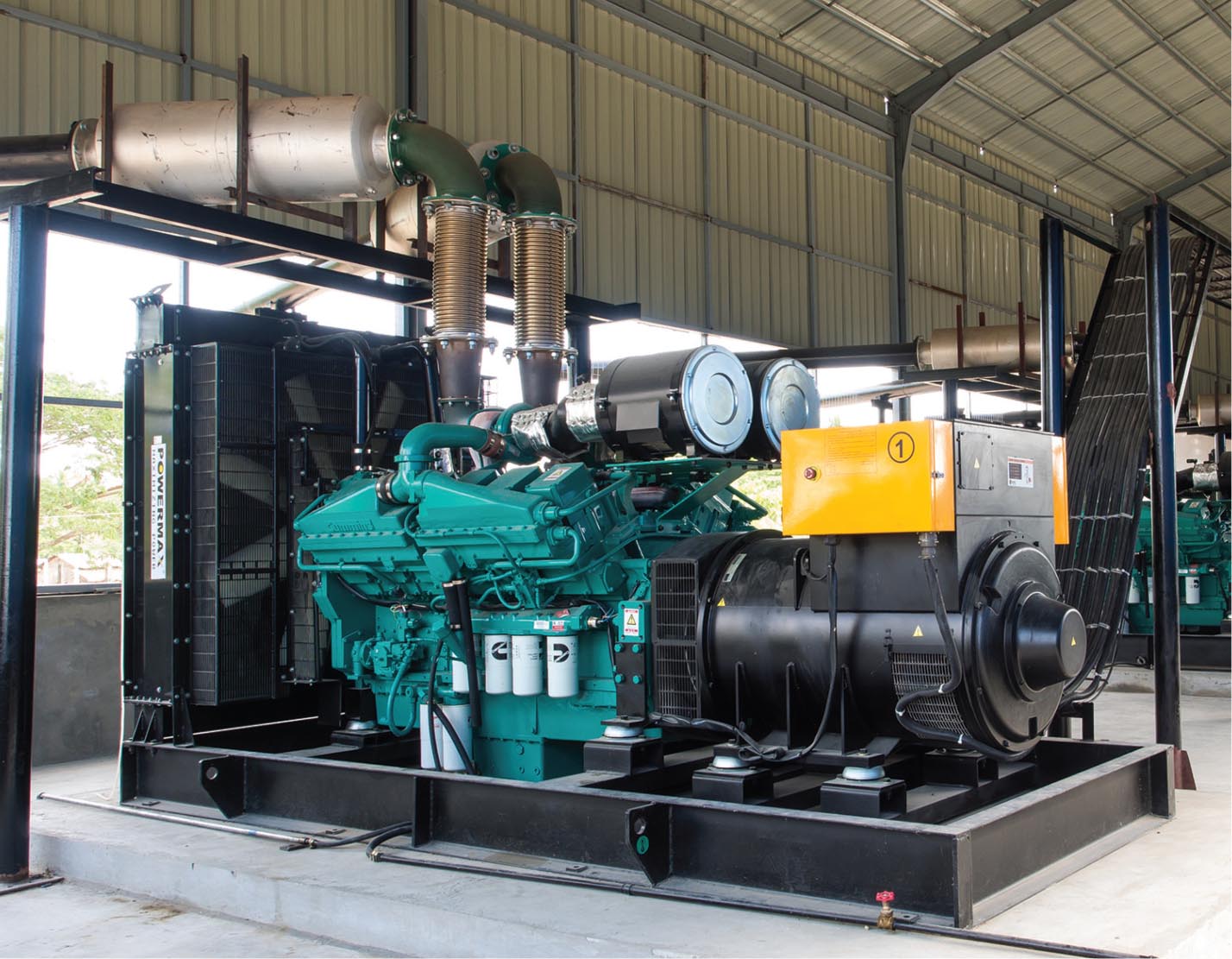 During the same month, CEAT Tyres Limited announced a partnership with Tata Power to establish a 10 MW captive solar power plant in Solapur, Maharash­tra. The plant will be developed at Tata Power’s Solapur site for powering CEAT’s Bhandup plant unit. Tata Power has created an SPV TP Akkalkot Renewable Li­mi­ted, to undertake the construction, operation and maintenance of this plant. It will help CEAT offset about 17.43 million kg of car­bon dioxide annually as the dependence on non-renewable resources for meeting the electri­city needs of the Bhan­d­up plant of CEAT is expected to be re­duced by 50 per cent. CEAT will own 26 per cent of the captive solar power plant and Tata Power will own 74 per cent.

In January 2021, Cipla Limited set up a 30 MW solar group captive project at Tuljapur, Maharashtra, to support the green energy requirements of its plants and reduce the environmental footprint. The solar project has been commissioned in partnership with AMP Energy India. The project will support the company’s gre­en energy requirements for its manufacturing units at Kurkumbh and Patal­ganga in Maharashtra. It will also help the company cut emissions by as much as 35,000 tonnes annually over its project life of 25 years.

As per India Infrastructure Research, over 16 GW of captive power capacity (in­­­cluding renewable) is at various sta­ges of development across all fuel seg­me­nts. While coal accounts for the lar­gest share of upcoming CPPs the metals and minerals industry is expected to see the largest deployment of captive ca­pacity over the next few years. Mean­wh­ile, the largest capacity is expected to come up in Odisha and Jharkhand, as compared to other states.

Rental power is designed for sectors that use power for short periods of time and at short notice. It can be utilised to keep operations running if the main/existing power source fails. It can also be utilised to give continuous power to locations that are not connected to the grid. Other purposes include meeting peak load demand when the main source of power is insufficient, peak-lopping, grid support, and power grid export. New products such as diesel solar hybrids or battery energy storage systems can also help consumers save money on fuel, lo­wer their carbon footprint and noise levels, and increase plug-and-play connectivity to suit their fluctuating temporary power needs.

Traditionally, diesel generator (DG) sets are often rented to deal with frequent, unplanned and scheduled power outages, as well as to satisfy additional po­wer needs. The rise of rental DG sets has been attributed to their ease of availability, shorter installation time and relatively lower capex. To ensure operational continuity, residential, commercial and industrial organisations rely on rental power solutions to provide standby po­wer. Rental power plants are used in a variety of industries, including telecommunications, event management, heal­th­care, power utilities, offshore, oil and gas, mining, infrastructure, shipping, and construction. Furt­her­more, data ce­ntres are projected to be built and located in the country as a result of supporting government policies and data protection laws. These trends are projected to result in a large increase in demand for reliable electricity, propelling the re­n­tal power industry forward.

Securing fuel supply, particularly coal, is a critical concern for captive power producers, as independent power producers and public sector generation companies receive precedence in coal supplies. During the coal shortage in recent months, CPPs were reportedly receiving only half of the required quantity of coal. Further, given the increasing stringency of emission norms, industries need to mobilise investments for installation of air quality control solutions such as flue gas desulphurisation systems and deNox equipment. The installation of air quality control systems will lead to an increase in opex as well as cost of generation from CPPs and affect the margins of industries. The Ministry of En­viron-ment, Forests, and Climate Ch­ange recently notified penalties for non-com­pliance of environment norms be­yond the stipulated timeline.

Various greenfield and/or brownfield expansion projects, including CPPs by industries, were adversely affected ow­ing to a halt on construction, disruption in equipment/spare parts supply chain, delays in approvals and clearances, and shortage of manpower during the Covid-19 lockdown. Many industries have shelved or postponed plans to start new projects due to the downturn in industrial and economic activity. As a result, capacity additions in the captive power market are projected to remain modest in the near future. The global outbreak of Covid-19 as well as a temporary halt on end-user activities such as construction have had a negative impact on the rental electricity sector.

In sum, given the importance of CPPs in industry growth, swift actions are re­quir­ed to address the concerns of the segment.