In line with the rapid changes taking pla­ce in Australia’s energy scenario, Power­link is actively working to make its contribution to the sector. The government of Queensland has set a target of a 50 per cent renewable energy portfolio by 2030, and the utility has accordingly aligned its goals. As part of a collaboration with the Queens­land government and new rene­wable energy generator Ne­­o­en, Power­link has a key role in en­abling the first renew­able energy zone (REZ) in the state and also upgrading the corresponding transmission in­fra­str­uc­ture. Additiona­lly, the utility is up­­gra­d­ing its transmission network in Far North Queensland to make the regi­on’s network more resilient and facilitate the connection of more renewable energy projects to the grid. Given the potential benefits for renewable generators and Queenslanders, Powerlink continues to work towards the establishment of other REZs throughout the state. 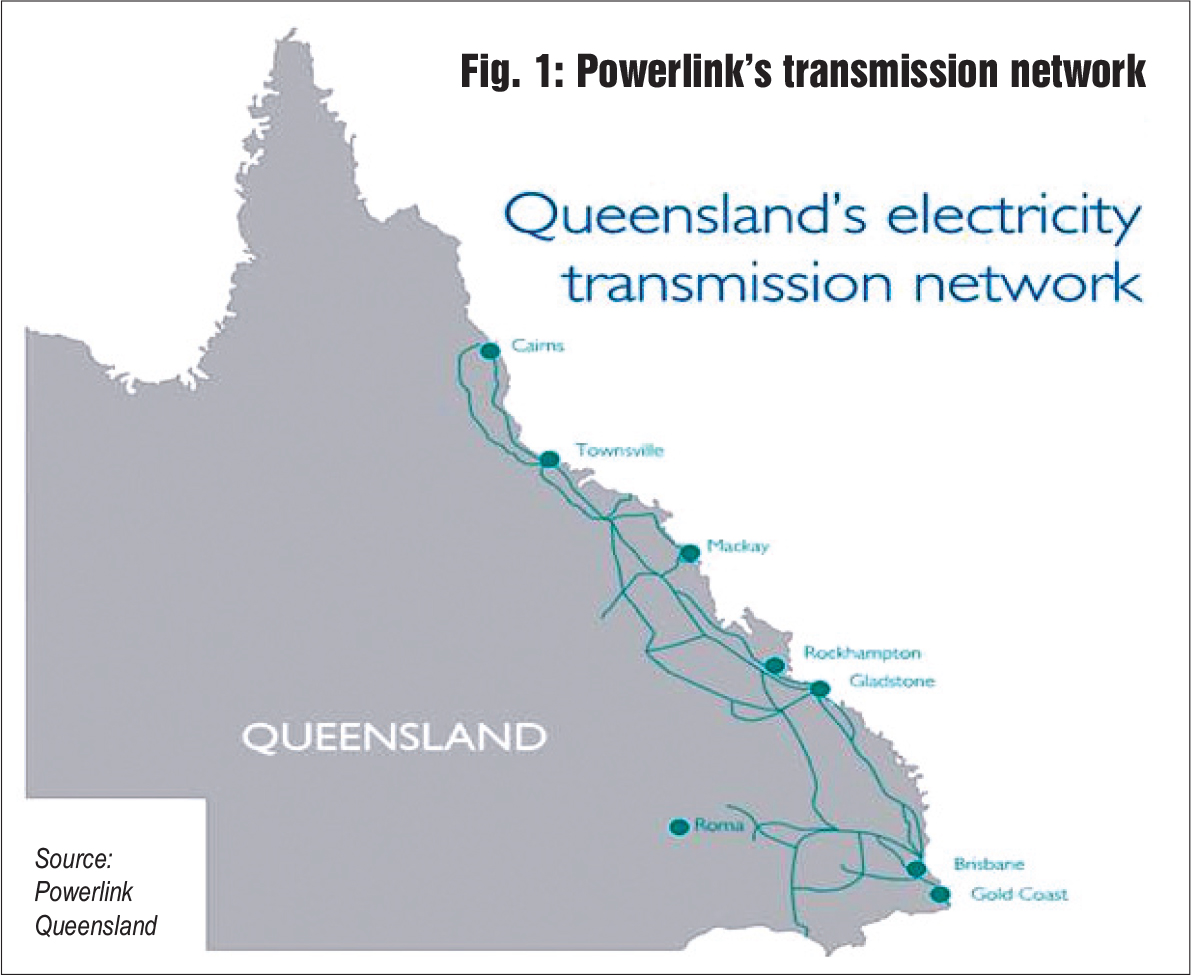 Queensland’s transmission infrastructure currently extends 1,700 square km from Cairns to the NSW border, and comprises 10,096 km of transmission lines and 147 substations. The annual growth in the transmission network has been minimal and this can be attributed to the utility’s focus on the rehabilitation and upgrade of the existing infrastructure. Over the past few years, Powerlink has been working to upgrade ageing infrastructure to make way for the rapid renewable energy shift in the power market.

Since 2016, transformer capacity has grown at a compound annual growth rate of 0.56 per cent, with most of the growth taking place at the 132 kV level and the number of substations having increased from 139 in 2016 to 147 in June 2021. The increase in transformer capacity of the existing substations has been given more weightage to make the grid reliable and sustainable for an increased share of renewable energy. 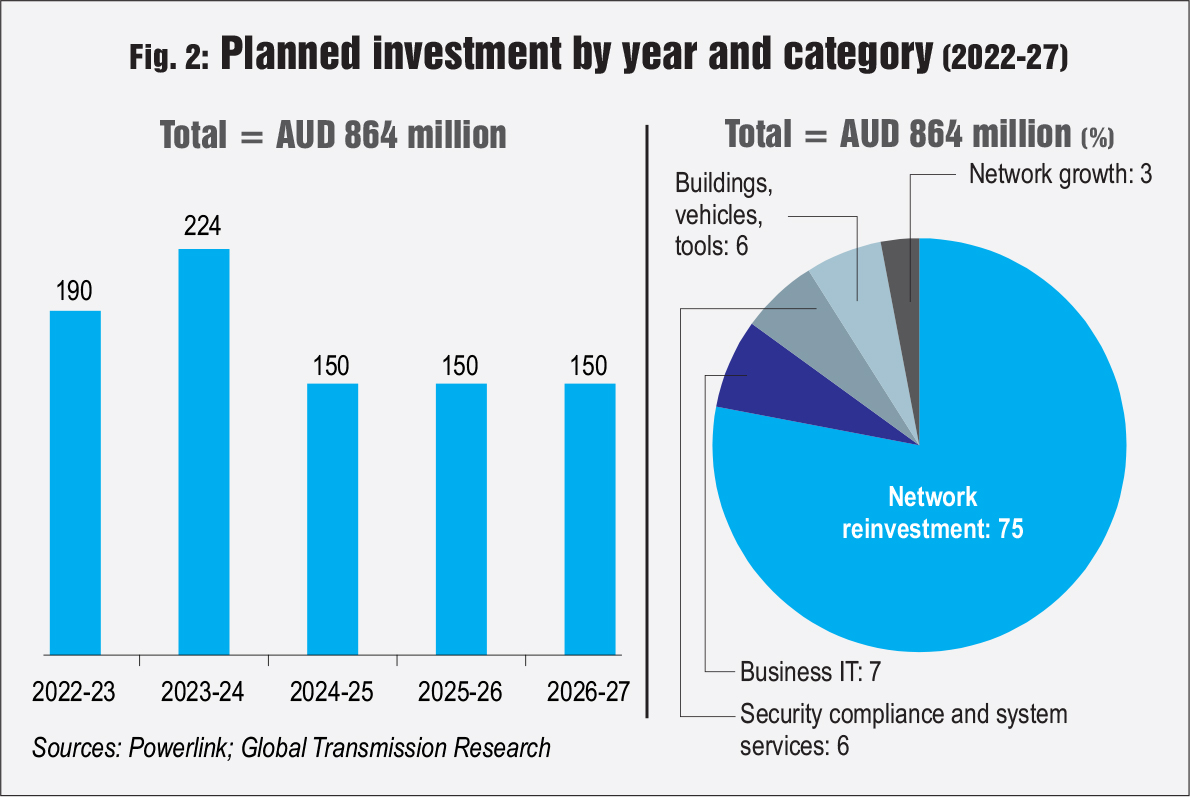 Powerlink has been trying to consistently improve its network performance and sys­tem reliability by continuously up­g­r­a­d­ing its existing assets. The annual ele­c­tricity transmitted has been over 50 TWh since 2015. Transmission losses have been consistent at 2.6 per cent where­as line fault outages have declined from 73 outages in 2019 to 50 outages in 2020.

The average outage duration declined significantly from 236 minutes in 2015 to 15 minutes in 2020. Additionally, tra­n­s­former faults and forced outages dec­reased from 31 to 23 and 26 to 20 respectively. The regulated reinvestment undertaken by the utility over the years has provided benefits on the reliability front with further scope for improvement.

For the financial year 2020-21 ended June 2021, Powerlink earned a revenue of AUD 984 million, which was about 15 per cent lower than the AUD 1,166 million earned in 2016. Revenue declined in the regulatory period of 2018-21 as a re­sult of AER’s decision on maximum revenue allowed on regulated assets, which determines how much operators can charge end users for their services. 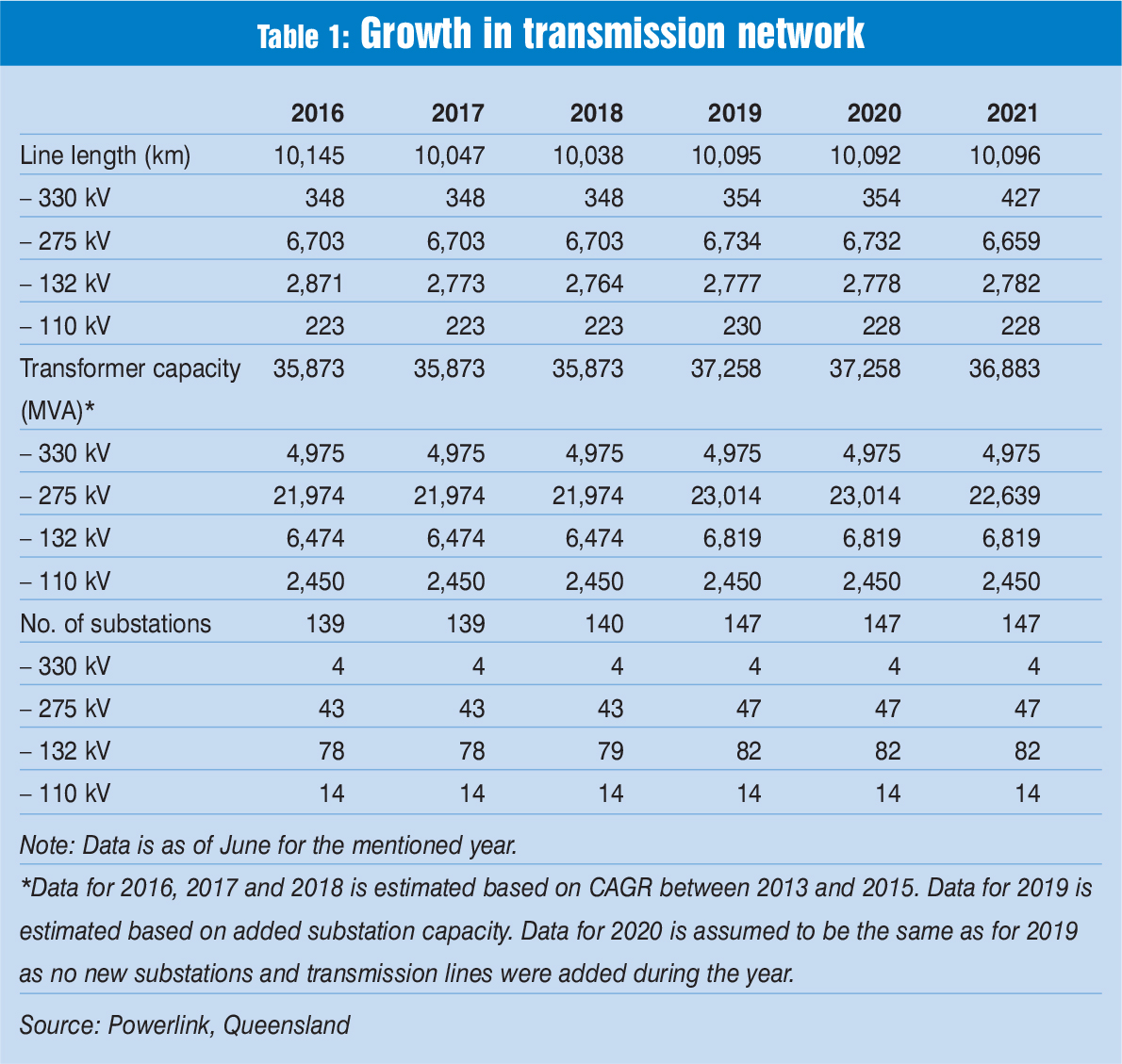 These decisions are made at five-year intervals and are based on required in­dustry investment and end consumer be­­nefits, which can sometimes lead to lesser revenue for the utility. In April 2017, the AER made its revenue determination, which established Powerlink’s regulated revenue for a five-year period till June 30, 2022. This process sets aside about 80 per cent of Powerlink’s annual revenue, which funds the capital and operating expenditure needed to deliver a safe, secure, reliable and cost-effective transmission network. 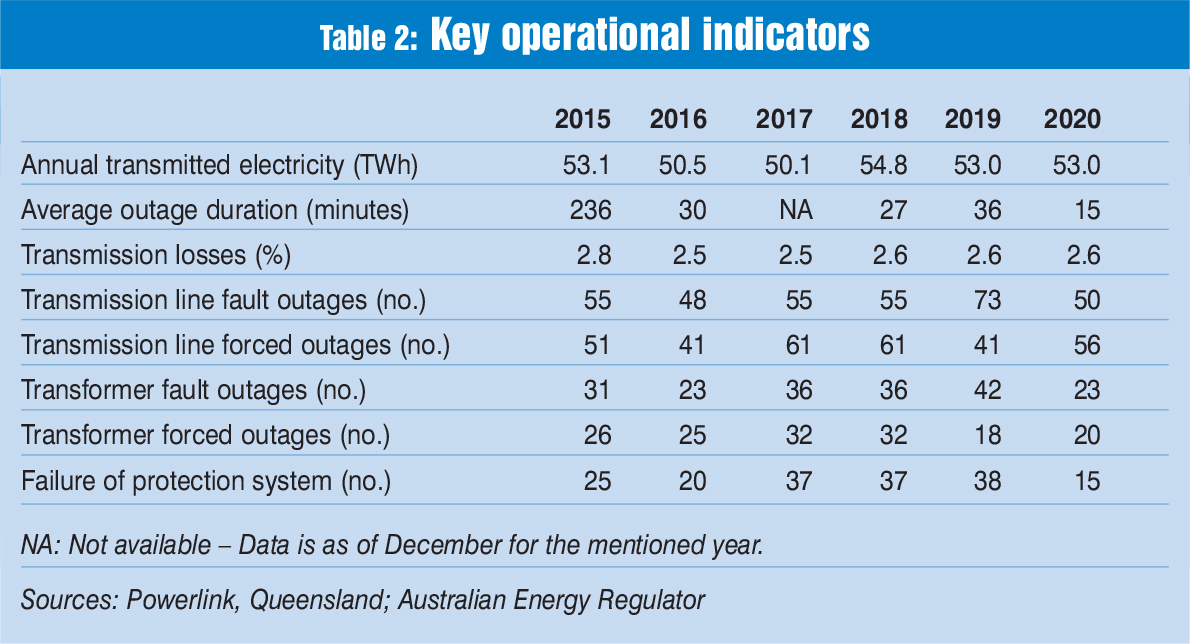 The net profit in 2020 was AUD 88.6 million, 0.2 per cent above the Statement of Corporate Intent (SCI) target, despite lower-than-expected inter-regional sett­le­ment residue revenue, which was driven by a dramatic fall in wholesale electricity prices in the second half of 2019-20. A similar profit of AUD 87 million was observed in 2021, which was 16 per cent higher than the SCI target and reflected Powerlink’s commitment and dedication during the ongoing Covid-19 pandemic towards maintaining a reliable network and delivering on its strategic and capital commitments.

Powerlink’s capital expenditure (capex) in 2020-21 was AUD 243.3 million, which was higher than the SCI target of AUD 212.8 million, reflecting additional in­­vestment in renewable connection projects. Capex was 35 per cent higher than the previous financial year  partly due to recommencement of works de­ferr­ed in 2019-20 as a result of the Covid-19 pandemic and additional renewable connection projects.

Powerlink plans to invest AUD 864 million in the next regulatory period of June 2022 to June 2027. As mentioned in its latest revenue proposal, most (78 per cent) of its planned capex is on reinvestment in the existing network assets. This type of investment is primarily due to end of asset life, obsolescence and reliability or safety requirements. Only 3 per cent of the planned investment will be spent on the development of new transmission network while the remaining 19 per cent will be spent on IT, security, buildings, etc.

The utility will focus on upgrading and refurbishing the grid to accommodate the rapidly growing renewable energy in the state. The Queens­land government has laid out plans for three REZs to be built in the upcoming decade, and the utility will need to ramp up its existing transmission network to make this transition smooth.

Powerlink’s market-driven REZ model promotes the appropriate allocation of risk and cost, with a focus on provision of transmission infrastructure through non-regulated funding. This model differs from the REZ approaches taken in other Australian states. As part of the market-led REZ model, the utility has planned an AUD 50 million upgrade of its existing network in Far North Qu­ee­nsland to unlock up to 500 MW of rene­wable energy hosting capacity as part of Queensland’s first REZ. An­­n­ounced in May 2021, the North Qu­eens­land REZ was the outcome of close work between Powerlink, renewab­le en­er­gy generator Neoen, CleanCo Queens­land and the Queensland government. To support the North Queensland REZ, Powerlink will upgrade an existing 132 kV transmission circuit between Town­sville and Cairns to 275 kV, a project that will also benefit electricity customers in Cairns by making their electricity supply more storm and cyclone resilient.

As part of Powerlink’s role in the energy industry transformation, the utility ac­tively investigated the application and be­nefits of large-scale battery energy storage systems (BESS) installed in the Powerlink network. The utility published an expression of interest (EoI) in March 2021, with the intent to engage with ex­ternal developers, investors and stakeholders in the BESS space and generate in­novative commercial and technical models so as to meet both Power­link’s te­chnical parameters and inves­tors’ requ­ire­ments for commercial returns.

The EoI proposed that Powerlink would offer BESS project proponents the opportunity to construct and install their BESS at optimal locations in the transmission network which will enable the provision of system services in the future. It was also proposed that Power­link would facilitate these projects through various technical and commercial support mechanisms, including access to Powerlink land and substation connection points, in exchange for network support services from battery systems.

The response to the EoI indicated significant interest in the next stage of the process, which involves issuing a request for proposal to shortlisted BESS projects two to three months after the first stage has been completed. As per legal documents, the EoI window closed on April 23, 2021, but there is no further information regarding the proponents and future stages.

There has been a paradigm shift in Australia’s energy sector, which has been driven by a new economic outlook, customer behaviour, government targets, and new technologies that have reshap­ed the industry in which Powerlink ope­rates. Under these changed conditions, Powerlink is assessing the need for key ageing assets, which are approaching the end of their service lives, and maintaining network resilience. The utility is also playing an integral role in facilitating the shift to renewables by investing time and finances to play its part in aiding the shift to clean energy.