NTPC Limited, the country’s largest po­wer generation company, is on a transition path. The company has a large ca­pacity base of 68.9 GW, mainly dominated by fossil fuels (82.5 per cent is based on coal and 9.4 per cent on gas/liquid fuels). It is now focusing on renewable en­ergy, which currently accounts for a 8.1 per cent share including hydro. NTPC pl­ans to create a renewables portfolio that is as large as its thermal portfolio and, therefore, it has doubled its renewable energy target to 60 GW from 30 GW by 2032. The company has also formed a subsidiary, NTPC Renewable Energy Limited (NTPC REL), to add renewables capacity through a focu­s­ed approach. The subsidiary is also ex­pected to be listed on the bourses in the near future.

Besides renewables, NTPC is taking ste­ps to minimise the environmental footprint of its thermal fleet by installing em­ission control equipment and follo­wing best practices for water and ash ma­na­gement, among other things. It has also commen­c­ed works on hydrogen-based micro­grids and plans to take up more pilot projects in this space. In line with its “The Brighter Plan 2032”, NTPC reduced its specific gr­e­enhouse gas emissions to 840 gm per kWh in 2020-21, marking a 3.4 per cent decline over the previous year.

The company has coal-based power pr­o­jects aggregating 56,874 MW and gas/ liquid fuel plants aggregating 6,512 MW. In addition, it has 3,725 MW of hy­dro­power projects and 1,852 MW of re­ne­wable energy projects.

Over the years, NTPC’s thermal fleet has consistently recorded better operational efficiency as compared to the national av­­erage. During April-December 2021, the plant load factor (PLF) of NTPC’s co­al-based plants stood at 68.95 per cent, higher than the national average of 57.02 per cent. During this period, NTPC’s Kor­ba thermal power station in Chhat­tis­garh re­corded the highest PLF of 94.07 per cent and was among the top 10 performing stations in the country in terms of PLF. In 2020-21, the company’s coal-ba­s­ed plants recorded a PLF of 66 per cent vis-à-vis the national average of 54.56 per cent.

NTPC also has seven captive coal blocks with an estimated capacity of 71 million tonnes per annum (mtpa). These include Pakri-Barwadih, Dulanga, Talaipalli, Ke­ran­dari, Badam, Chatti-Bariatu and Ban­ha­rdih. Currently, three mines – Pakri Ba­rwadih, Dulanga and Talaipalli – are operational while the others are at various st­a­ges of development. NTPC recorded a coal production of 11 mt in 2020-21 and 9.65 mt in April-December 2021. The cumulative production till December 31, 2021 was about 42 mt. 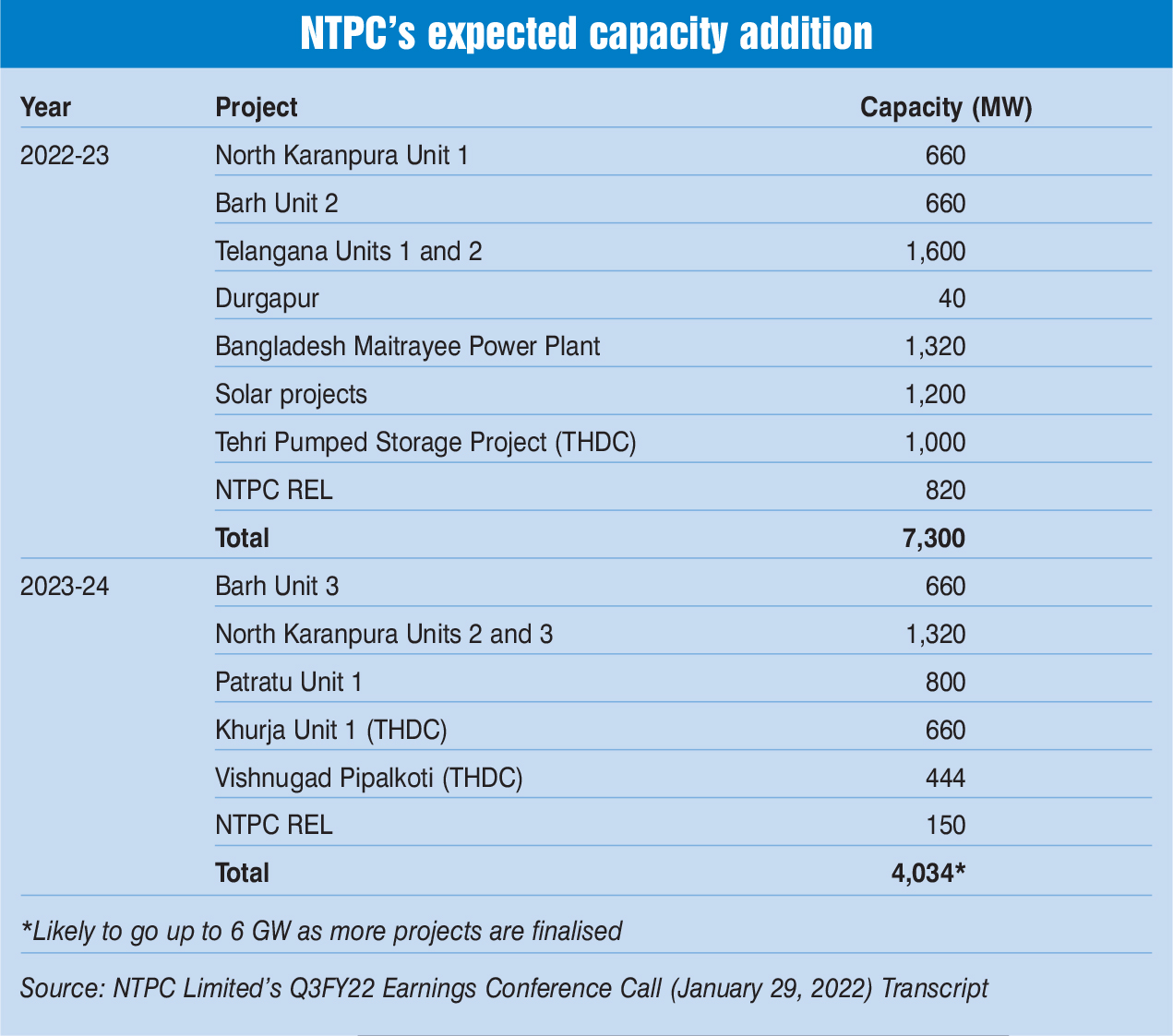 Renewable energy is a key focus area for NTPC. At the company’s 45th annual ge­neral meeting held in Septem­ber 2021, Gurdeep Singh, chairman and ma­naging director, NTPC, said, “With the focus shifting towards cleaner so­urces of power and the go­vernment setting a target of 450 GW of renewable energy capacity by 2030, we have also sharpened our fo­cus on renewables as the next pillar of growth. The company has prepar­ed its business plan to tap this opp­or­tunity appropriately while continuing work on operating its thermal fleet efficiently, economically and reliably to meet the growing energy needs of the country.”

As of end December 2021, the company’s renewable energy portfolio comprised 3 GW of solar projects under im­plemen­ta­tion and 3.1 GW of capacity secured th­rough tariff-based competitive bidding. Over the next two years, NTPC plans to commission 3.5 GW of renewable energy capacity and start work on the remaining capacity once it receives the letter of award. The company has also issued a tender for the procurement of 3 GW of storage capacity. NTPC’s biggest project announcement was in July 2021, when its subsidiary NTPC REL received approval from the Ministry of New and Renewable Energy to set up a mega solar park in the Rann of Kutch in Gujarat with a total capacity of 4,750 MW. In the same month, NTPC REL won 335 MW of solar power capacity in the auction for 450 MW of solar projects conducted by Rewa Ultra Mega Solar Limited.

Apart from conventional solar and wind power plants, NTPC is actively foraying into the field of green hydrogen. The company believes that renewable energy addition will power its future hydrogen initiatives, which can be utilised for many applications ranging from mobility to green chemicals and en­e­rgy storage. In July 2021, NTPC REL is­sued a domestic tender to build India’s first green hydrogen fuelling station in Leh, Ladakh. The company is also building a separate 1.25 MW solar plant in Leh to make the hy­dro­gen fuelling station completely green. The tender followed others by NTPC REL and NTPC Vidyut Vyapar Nigam Limited for fuel cell buses in Ladakh. Further, NTPC REL has sign­ed an MoU with the Ladakh government for the development of green hydrogen technology in high-altitude and re­mote regions to promote emission-free transportation. The company has awarded a project for stand­alone fuel cell-based microgrid with hydrogen production using electroly­sers at NTPC Sim­ha­dri (Andhra Prade­sh). This will be India’s first green hydrogen-based energy storage project. NTPC has also invited global ex­pressions of interest to set up a pilot project for blending hydrogen into city gas distribution networks. 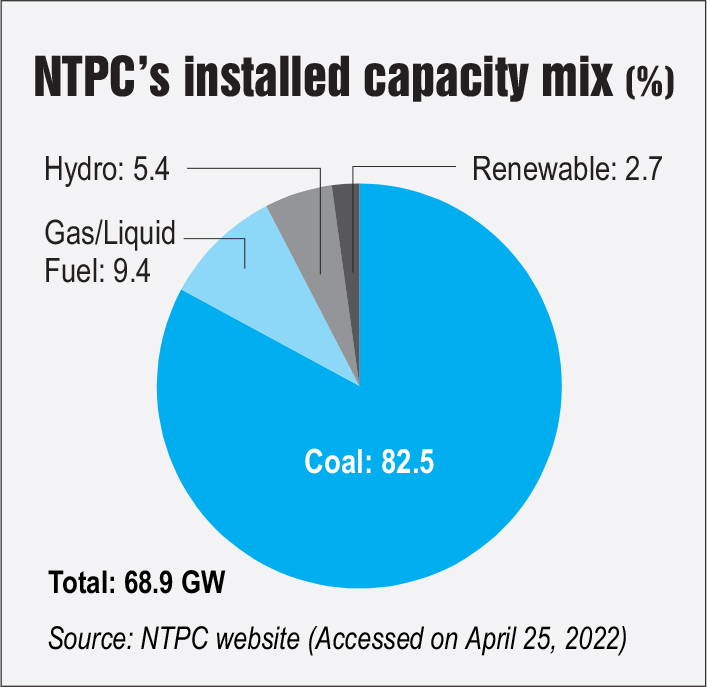 Being the largest thermal power generator, the installation of emission control equipment is a key priority for NTPC. Fl­ue gas desulphurisation (FGD) syste­ms need to be installed for about 64 GW of capacity for SOX control. So far, FGD systems have been commissioned for 1,340 MW of capacity (4×210 MW Da­d­ri Stage I TPP Units 1-4 and 500 MW Vindhyachal TPP Unit 13). The company has installed a wet FGD system at Vi­ndhyachal TPP Unit 13 and has opted for dry sorbent injection-based FGD systems for the four units of the Dadri Stage I TPP. The erection of a wet FGD system at Dadri Stage II and DSI-based systems at two units of Tanda Stage I are at an ad­vanced stage.

For the control of particulate matter (PM) emissions, most of NTPC’s units are complying with the prevailing norms due to the installation of high efficiency electrostatic precipitators (ESPs). In order to further improve the efficiency of ESPs and achieve the stipulated emission levels, steps are being taken to refurbish existing ESPs. Accordingly, NTPC has planned the renovation and modernisation (R&M) of ESPs in 64 generation units, of which works have been completed in 48 units (as of 2020-21). The R&M of ESPs is under way in about 5 GW of capacity across the remaining 16 units.

NOX emissions are being controlled through excess air and combustion temperature optimisation in most of NTPC’s units. The company has planned and awarded contracts for combustion modification for over 20 GW of its coal-based capacity. Combustion modification has been completed in 15 units of around 7 GW including units located in the Na­tional Capital Region (NCR) (two units of Dadri, three units of Jhajjar) have al­rea­dy been completed while mo­difica­tion works are under way for 34 units totalling 14 GW. Further, NTPC has conducted pilot tests for selective catalytic reduction for NOX reduction to determi­ne its suitability for high ash Indian coal. The results of these tests have been submitted to the Supreme Court, which has constituted a committee to review the NOX norms.

In addition, NTPC is taking steps to change the secondary fuel used at its po­wer plants in the NCR, Haryana and Uttar Pradesh, from heavy fuel oil to alternative fuel (LDO or LSHS, which has low sulphur content) in order to mi­ni­mise SOX emissions during the start-up of coal-based units. Further, for on­line monitoring of emissions and effluents, continuous emission monitoring systems, effluent quality monitoring sy­stems and continuous ambient air quality monitoring systems have been ins­talled at all operational as well as up­coming projects.

NTPC has taken rapid strides on the ash utilisation front, too, which has helped increase its utilisation level from 41 per cent in 2015-16 to 79 per cent in 2020-21. Further, the company has started co-firing in 14 of its coal-based power plan­ts under its Blue Sky initiative to address the issue of stubble burning in northern India.

Waste-to-energy and farm-to-fuel projects are also covered under the initiative. Recently, NTPC has collaborated with Delhi Jal Board to utilise the sludge produced in the sewage treatment plants. The torrefied waste sludge was fired at NTPC’s Dadri unit-4.

NTPC has recorded a robust financial performance over the years. As per the company’s consolidated financial resul­ts, it recorded a revenue of Rs 1,155.5 billion for the year ended March 2021, whi­ch is an increase of 2.8 per cent over Rs 1,123.7 billion in the previous year. The total expenses increased by about 3 per cent to Rs 992.3 billion from Rs 964 billion during the same period. Fuel costs account for a major share (approximately 56 per cent) in the total expenditure. The profit for 2020-21 stood at nearly Rs 150 billion, up by 2.6 per cent from Rs 119 billion in the previous year.

Notably, NTPC is following a proactive strategy for obtaining low-cost debt. This has helped it achieve a weighted average cost of borrowing of 6.24 per cent in 2020-21, which is at par with the market standard. The group’s capex in 2020-21 stood at Rs 339.8 billion. During April-De­cember 2021, the group incurred a ca­pex of Rs 250.6 billion as compared to ab­out Rs 130 billion in the previous period.

NTPC is looking to add 11-13 GW of generation capacity in the next two years (2022-23 and 2023-24). This includes the company’s maiden coal-based power pr­o­ject in Bangladesh – the 1,320 MW Mai­tree Super Thermal Power Project – being built by its 50:50 joint venture company (Bangladesh-India Friendship Pow­er Co­m­pany) with the Bangladesh Power De­v­e­lopment Board. Of the total targeted ca­pacity, about 7.3 GW will be added in 2022-23 while projects totalling around 4-6 GW are likely to be added in 2023-24.

For 2021-22, the company has a capex target of Rs 237.36 billion, of which about 90 per cent had been met by December 2021. For 2022-23, the capex target is ar­ound Rs 225 billion, of which nearly 40 per cent will be spent on renewables. For 2023-24, the capex numbers are still be­ing finali­s­ed. So far, about Rs 183 billion has been fir­med up, but this is expected to be re­vised upwards. Going forward, the proportion of capex towards renewables will increase progressively.

Although the company is aggressively expanding in renewables, it will also add new thermal capacity to meet the transition fuel requirements. Recently, NTPC initiated the tendering process for the new 1,320 MW Talcher thermal power station in Odisha, which will replace the old 460 MW power plant at the same site. It is also looking at some other thermal projects (Singrauli, Lara, Darliparli, etc.), but in line with its focus on decarbonisation, these capacities will not be ad­ded in the same way as before, but they will be based on “blue coal technology”, whi­ch has a lower carbon footprint.

Going forward, NTPC is expected to em­erge a leader in India’s renewable energy space while maintaining its dominance in the thermal power sector.