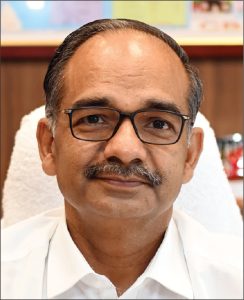 India is aggressively moving towards its energy transition ambitions and the targets set at the COP26 summit held in Glasgow. Roughly 157 GW of clean energy, comprising 110 GW of renewable energy and 47 GW of hydropower, has been installed as of March 2022. While renewable energy deployment continues to grow, the focus is also on streamlined grid integration of renewables through flexible coal-based power generation and energy storage deployment. There is also a significant focus on energy efficiency across sectors, and the development of offshore wind and green hydrogen capacities. At the India Infrastructure Forum 2022, Alok Kumar, Secretary, Ministry of Power, talked about India’s energy transition agenda and the achievements so far. Excerpts from his remarks…

India has already started its energy tra­n­sition. We had declared our Natio­nally De­termined Contributions (NDCs) post the Paris Agree­ment, and the country has done very well in the achievement of those NDCs. India has reduced its emission intensity by about 28 per cent as compared to the 2005 levels, whereas our goal is to achieve 33 per cent reduction by 2030. Another goal that we had set for ourselves was to have 40 per cent electricity generation ca­pacity from non-fossil fuels by 2030. The country has already achieved this goal nine years in ad­vance in 2021. It has al­ready embar­ked upon its energy transition and has performed very well as compared to other countries.

At the recent COP26, our Prime Minister laid out a roadmap for India’s energy transition to net zero by the year 2070. The target for the reduction of emission intensity has been raised to 45 per cent by 2030 from 33 per cent earlier over the 2005 levels. We have also undertaken a pledge that India would install 500 GW of electricity capacity from non-fossil fuels by 2030. Further, we have decided to reduce our carbon dioxide emissions in this decade by about 1 billion tonnes. We are confident that India will continue to be a world leader in energy tran­si­ti­on. But at the same time we have to en­sure that ad­e­quate energy is made av­a­il­able at affordable prices and in a compe­titive manner for all economic activities. Our Pri­me Minister has set a goal that while we ac­hieve our aims for energy tra­nsition, India will lead by example. Our per capita emissions are hardly one-third of the world average. For saving the planet, all countries need to contribute and see that their per ca­pita emissions are brought under control.

India’s energy transition has two main pillars for this decade at least. One is the larger and continuously increasing integration of renewable energy with more in­stalled capacity based on renewable energy that is connected to the grid. This is going to contribute to almost 50 per cent of our targets. The remaining will be met with a very aggressive focus on energy conservation. We have made an action plan for energy savings, which we are discussing with our sister Ministries, regarding the manner in which we can achieve the target to avoid 1 billion tonnes of carbon dioxide in this decade. We have discovered that a large share of energy savings is possible in two areas – large industries and buil­dings. We are working closely with the concern­ed Ministries, our in­d­ustry partners, representatives and as­so­­ciations. We want to bring more and more industries under the PAT scheme to promote new technologies and improve their energy intensity.

Further, all the buildings that we build in this decade, which will be there for the next 40-50 years, should be energy efficient. It is not only the commercial buil­dings but also residential ones that will have to be constructed according to the latest energy efficiency standards. In the recent budget, the Union Finance Minis­ter anno­un­ced that India will take aggre­ssive ste­ps to promote the energy service compa­ny (ESCO) model for commercial buildings. The Bureau of Energy Efficiency is almost at the state of finalising a new document for the ESCO model with a model monitoring and verificati­on contract and a commercial contract. Another area where we are working ex­tensively is the EV space.

By 2030, India is likely to have an ins­talled power capacity of around 810 GW and our target is to have at least 500 GW of non-fossil-fuel-based capacity. The big­gest challenge for India’s energy transition is how to integrate such a large quantum of intermittent and seasonal renewable energy into the grid. We have decided that the first low-hanging fruit is the flexible operation of coal-based plants. Currently, the NTPC fleet can flex up to 55 per cent and some of its power plants have tried up to 40 per cent as well, while the fleet in states is still operating at 70-75 per cent. So, the Govern­me­nt of India is going to work closely with the states in the next two to three years to make sure al­mo­st all of the co­un­try’s coal-based pow­er plant fleet is able to flex up to 40 per cent. Flexing up to 55 per cent does not require significant additional expenditure, but when going down from 55 per cent to 40 per cent, we need around Rs 1 million per MW expenditure. Thus, it is a low-han­ging fruit with sm­all expenditure that will give enough ca­pacity to the grid to ab­sorb renewables.

After this, and once we have exploited the potential available from flexible coal-based operations, the second stage will be to start building grid-scale energy sto­rage either as a transmission asset or an­ci­llary service or collocated with so­lar and wind power plants. It has been estimated that India will require around 27 GW of energy storage for four hours and around 108,000 GWh of energy storage by 2030.

Against this backdrop, a tender has been released for the first pilot project of 1,000 MWh battery storage and we have had a successful pre-bid meeting. This pi­lot will give us a lot of learning and in­d­ustry confidence on how to build up our energy storage capacity. Battery sto­rage is longer effective for two to four hours. Thus, for a longer time shift of six hours we would need pumped storage projects. It is a priority area for us and we want to promote it. India will be taking up energy storage development in a big way and it will require some priority gap funding for the initial projects, support me­chanisms for scaling up, as well as a proper policy and regulatory framework. An­oth­er area of significant interest for us is the development of offshore wind projects.

The viability of discoms is a major challenge. It is relevant in the context of energy transition because the new investment in the deployment of generation ca­pa­city will come when there is surety that payments will be made in time. Further, with de­centralised applications of renewable energy like KUSUM projects or rooftop solar being massively pr­o­moted, these prosumers or small prod­u­cers will interface with discoms and they will have to be paid in time. Further, our discoms will be handling larger share of electricity supply in the future so their viability is critical. The government has launched the Revamped Distribution Sector Sche­me to turn around the discoms. While it is a challenge, the state discoms are working hard towards meeting the pre-qualifications and im­proving their operations, and we are sure it will be a successful scheme.

Finally, green hydrogen is also an area of opportunity, and the Ministry of New and Renewable Energy is extensively working on it. We are partnering with it for the pow­er transmission required for producing green hydrogen and green ammonia, energy banking and policy support. Gr­een hydrogen holds significant pros­pects for hard-to-abate sectors. In this decade, we will work on introd­uction of green hydrogen technologies in hard-to-aba­te in­dus­tries like steel, cement, fertilisers and re­fineries. While the technology introduction will start in this decade, large scale-up will happen after 2030. The large-scale adoption of green hydrogen and green ammonia will be a key intervention in In­dia’s energy transition beyond 2030.