With an aim to deliver reliable, secure, quality and affordable power to all consumers by creating an efficient and financially sustainable power sector, the central government has implemented various reform initiatives and programmes. Notably, the government has implemented a massive rural electrification programme and a last-mile connectivity plan – Sahaj Bijli Har Ghar Yojana (Saubhagya) and Deen Dayal Upadhyaya Gram Jyoti Yojana (DDUGJY); initiatives for network strengthening and information technology (IT) enablement – Integrated Power Development Scheme (IPDS); initiatives for performance improvement of discoms – Ujwal Discom Assurance Yojana (UDAY), etc. In July 2021, the Ministry of Power (MoP) announced the Revamped Distribution Sector Scheme (RDSS) with an overall outlay of Rs 3.03 trillion, to improve the operational efficiency and financial sustainability of discoms by providing result-linked financial assistance. The scheme, to be implemented over five years from 2021-22 effective through 2025-26, will be executed based on an action plan developed for each state rather than a one-size-fits-all approach. The scheme incorporates all current projects sanctioned under programmes such as the IPDS, DDUGJY, and the Prime Minister’s Development Package (PMDP)-2015.

The scheme was launched to provide reform-based result-linked financial assistance to discoms to strengthen the supply infrastructure. This is a conditional scheme where funds are released on meeting the pre-qualifying criteria and achieving basic minimum benchmarks. The RDSS has an outlay of Rs 3.03 trillion over five years, that is, 2021-22 to 2025-26. The outlay includes an estimated government budgetary support of Rs 976.31 billion. The scheme aims to reduce aggregate technical and commercial (AT&C) losses to pan-Indian levels of 12-15 per cent by 2024-25 and reduce the gap between the average cost of supply and average revenue realised to zero by 2024-25. Further, it aims to develop institutional capabilities for modern discoms, and improve quality, reliability and affordability of power supply to consumers through a financially sustainable and operationally efficient distribution segment.

The scheme has two key parts. Part A comprises metering and distribution infrastructure works, and Part B includes training and capacity building as well as other enabling and supporting activities. Part A of the scheme broadly includes three components – financial support for prepaid smart metering and system metering, upgradation of the distribution infrastructure, and project management. Under metering, the scheme envisages the installation of around 250 million prepaid smart meters for all consumers except agricultural consumers. Priority will be given to all 500 Atal Mission for Rejuvenation and Urban Transformation (AMRUT) cities, union territories (UTs), industrial and commercial consumers including micro, small and medium enterprises, government offices (at the block level and above), and high-loss areas. In addition, the scheme envisages separation works for 10,000 agricultural feeders with an investment of Rs 200 billion. Thereafter, these feeders are solarised under the Pradhan Mantri Kisan Urja Suraksha evam Utthaan Mahabhiyan (PM-KUSUM) – leading to cheap/free daytime power for irrigation. Apart from this, the RDSS proposes the implementation of supervisory control and data acquisition (SCADA) in all urban areas and distribution management systems (DMSs) in 100 urban centres.

As per the latest available information, the government has approved proposals of 13 states under this scheme with a financial outlay of around Rs 1.62 trillion (refer to the table). 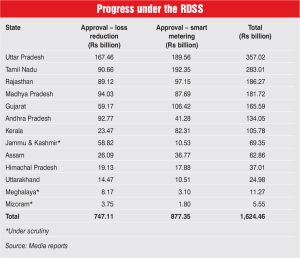 Schemes subsumed under the RDSS

All ongoing projects approved under schemes such as the IPDS, DDUGJY and PMDP-2015 (for the UTs of Jammu & Kashmir and Ladakh) will be subsumed under the RDSS. The savings in gross budgetary support amounting to about Rs 170 billion will be part of the total outlay for the new scheme.

IPDS: The IPDS, notified on December 3, 2014, largely envisaged the strengthening of sub-transmission and distribution networks, metering of distribution transformers/feeders/consumers in urban areas, IT enablement of the distribution sector (under the R-APDRP) and underground cabling to include the additional demand of states. The total outlay for the scheme (excluding the R-APDRP) is estimated to be Rs 326.12 billion, including a budgetary support of Rs 253.54 billion from the central government for new projects, in addition to the total outlay of Rs 440.11 billion, including a budgetary support of Rs 227.27 billion under the subsumed component of the R-APDRP. A total project cost of Rs 310.74 billion has been sanctioned under the IPDS. The central government grant has released around Rs 175.3 billion so far. Component-wise, around 91.7 per cent of the sanctioned cost is for system strengthening. Under system strengthening and distribution, projects covering 547 circles in 33 states/UTs have been taken up. Of these, the distribution system strengthening works in 546 circles have been successfully completed. Apart from this, Rs 17.65 billion has been earmarked for IT and OT projects (such as IT enablement of towns, enterprise resource planning, real-time data acquisition system, and smart meters) and Rs 8.14 billion for new technologies (such as gas-insulated switchgear substations). The IPDS had its sunset on March 31, 2022. As per the monthly summary for the cabinet for March 2022, projects worth Rs 289.99 billion have been sanctioned under the scheme, out of which Rs 176.38 billion has been released. In terms of physical progress, over 34,071 ckt. km of high and low tension lines have been installed as of February 2022 and around 85,591 ckt. km of underground/aerial bunched cables have been laid. Further, 991 new substations have been set up while over 1,600 existing substations have undergone capacity augmentation.

DDUGJY: Launched in December 2014, the DDUGJY primarily focuses on the separation of agricultural and non-agricultural feeders to facilitate the judicious supply of electricity to rural areas, strengthening and augmentation of sub-transmission and distribution infrastructure, and metering at distribution transformer, feeder and consumer sites. In terms of physical infrastructure, as of December 2021, 122,123 ckt. km of 11 kV feeders have been segregated, and 3,958 substations  (including augmentation of 2,093 substations) have been commissioned. As reported by the states, all inhabited unelectrified villages as per 2011 the census stand electrified as of April 28, 2018 across the country under the DDUGJY. A total of 18,374 villages were electrified under the scheme. The time extension granted by the Ministry of Power for the completion of works under DDUGJY projects was up to December 31, 2021.

Unnat Jyoti by Affordable LEDs for ALL (UJALA): Launched on January 5, 2015, the UJALA scheme aims to provide LED bulbs to domestic consumers at an affordable price as a replacement of incandescent bulbs.  In total, 368.65 million LED bulbs have been distributed by EESL under UJALA as of June 27, 2022. In addition, EESL has distributed 7.22 million LED tube lights and 2.36 million energy efficient fans under UJALA.

Gram UJALA: Launched on March 19, 2021, the programme aims to replace  incandescent light bulbs with efficient LED bulbs in rural areas. The bulbs are being offered at Rs 10 per bulb and the rest of the cost is proposed to be recovered from carbon financing. EESL’s subsidiary, Convergence Energy Services Limited (CESL), which is implementing the scheme, has distributed over 8.054 million LED bulbs under this programme.

Street Lighting National Programme (SLNP): As on June 27, 2022, over 12.8 million LED street lights have been installed in urban local bodies (ULBs) and gram panchayats across India under SLNP.

To summarise, under the past schemes, large-scale distribution infrastructure was created apart from achieving major milestones such as complete village electrification by 2018 and universal household electrification by 2019. The focus of the government has shifted to two major outstanding challenges in the distribution sector, that is, addressing financial sustainability of the distribution sector, and increasing consumer centricity in the distribution sector. Taking into account the limitations and issues identified in previous schemes, the RDSS focuses on enhancing discoms’ operating efficiency. However, the timely implementation of the projects under the scheme, including the smart metering programme, will remain critical to achieve the desired objectives. N