In the grand finale marking the culmination of ‘Ujjwal Bharat Ujjwal Bhavishya – Power @2047’, the Prime Minister virtually interacted with the beneficiaries of various schemes and launched Revamped Distribution Sector Scheme (RDSS) to revamp the ailing power distribution segment along with dedicating various renewable energy projects to the nation.

The Prime Minister has launched the Ministry of Power’s flagship RDSS scheme which aims to improve the operational efficiency and financial sustainability of distribution companies. With an outlay of Rs 3,037.58 billion for a period of five years (2021-22 to 2025-26), the scheme aims to provide financial assistance to discoms for modernisation and strengthening of distribution infrastructure, and improvements in reliability and quality of supply to end consumers. It also proposes to provide 250 million smart prepaid meters to consumers all over the country. 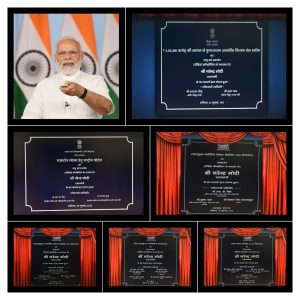 The Prime Minister has also launched the national portal for rooftop solar, which will enable online tracking of the process of installation of rooftop solar plants, starting from registering the applications to release of subsidy in residential consumers’ bank account after installation and inspection of the plant. The estimated capacity under the national solar rooftop program is 4,000 MW. This will be a major step towards realising the solar rooftop potential of the nation and will contribute towards India’s target to produce 500 GW energy through non-fossil fuels committed in COP-26.

With the launch of this portal, it will be very simple for a residential consumer to apply and get the solar rooftop solar installed. The consumers will have the choice to select, any vendor registered with the local distribution company, solar modules of equality and efficiency, solar inverter and other balance of plants and equipment. The process of registration of vendors with the distribution company has been made simple, they have to just submit a declaration along with a performance bank guarantee (PBG) amount of Rs 250,000.. TTo protect the interest of consumers, apart from mandating the vendors to get registered at the discom, the vendor also has to maintain the rooftop solar system for at least 5 years.

Additionally, the PM also dedicated and laid the foundation stone of various green energy projects of NTPC Limited worth over Rs 52 billion.

Projects dedicated to the nation: Two floating solar projects were inaugurated by the Prime Minister. These include-

Projects launched: The Prime Minister laid the foundation stone for three renewable energy-based projects. These include-