The demand for transformers is mainly driven by the growth in the T&D segments. The transmission segment is set to witness rapid growth owing to the need to evacuate large-scale renewab­les. With the government’s target of inc­reasing non-fossil fuel electric capacity to 500 GW and meet 50 per cent of its energy requirements from renewables by 2030, a massive expansion in renewable energy capacity is expected, and a commensurate increase in transmission networks will be required. Several central programmes are also under way to support this expansion, which will drive the demand for transmission equipment, including transformers.

One such key programme is the Green Energy Corridors (GEC) initiative, which is being implemented in a phased manner by Power Grid Corporation of India Limited (Powergrid) and state transmission utilities. The objective is to integrate large-scale renewable capacity addition into the national grid. Under GEC Phase I, 3,200 circuit km (ckm) of interstate transmission lines and 17,000 MVA of substation capacity have been commissioned for evacuation of 6 GW of renewable energy. Recently, the Cabinet Com­mi­ttee on Economic Affairs, chaired by the prime minister, approved the GEC Pha­se II programme for intra-state transmission systems. Under this phase, projects will be set up in seven states – Gu­jarat, Himachal Pradesh, Karnataka, Ke­ra­la, Rajasthan, Tamil Nadu and Uttar Pradesh – to expedite the evacuation of approximately 20 GW of renewable energy. Under GEC Phase II, approximately 10,750 ckm. km of transmission lines and 27,500 MVA of substation transformation capacity at the intra-state level are ex­pe­cted to be added.

Similarly, the transmission scheme for renewable energy zones (REZs) aims to evacuate 66.5 GW of renewable energy capacity (50 GW solar and 16.5 GW wind) at an estimated cost of Rs 432 billion in seven renewable energy-rich states – Ta­mil Nadu, Andhra Pradesh, Kar­nataka, Gujarat, Rajasthan, Mahara­sh­tra and Ma­dh­ya Pradesh. A comprehensive tra­nsmission system has been pl­a­nned for integration of potential REZs. The implementation of schemes is being undertaken in a phased manner in Rajasthan and Gujarat.

In the distribution segment, the Revam­ped Distribution Sector Scheme aims to reduce aggregate technical and commercial losses to pan-India levels of 12-15 per cent, and the average cost of supply-average revenue realised gap to zero, by 2024-25. The reforms-based and re­sults-linked scheme has an outlay of Rs 3,037.58 billion over five years, with an estimated go­vernment budgetary support of Rs 976.31 billion. As of December 2021, the government has reportedly approved proposals worth over Rs 1.62 trillion for 13 states. Of this, about 54 per cent (Rs 880 billion) has been earmarked for smart metering and the remaining for infrastructure upgradation for loss reduction. As per the scheme guidelines, distribution infrastructure works are required for strengthening and modernising the system as well as for loss reduction. 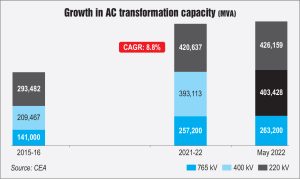 Besides T&D, transformers are required at conventional as well as renewable en­ergy plants. Given the country’s ambiti­ous solar energy target of 300 GW by 2030, the demand for solar step-up transformers from renewable energy de­velopers is expected to accelerate. These transformers step up the direct current (DC) voltage to the required AC voltage before supplying it to the electricity grid. Their ratings typically range from 500 kVA up to 5 MVA (for three-phase 33 kV class transformers).

In addition, the metro and railway segment is another key consumer of transformers, especially traction transformers, which are important components in the traction chain that affect train performance and operator services. Given In­dian Railways’ (IR) target of electrifying the entire broad-gauge network by 2023, the demand for these transformers is set to grow. In January 2022, Chitta­ra­n­jan Locomotive Works and Diesel Loco Modernisation Works, part of the IR, aw­arded a contract for traction transformers to Hitachi Energy. The IR undertook the record electrification of 6,366 rkm during 2021-22, taking the total electrified bro­ad gauge route to 52,247 rkm as of March 2022, which is 80 per cent of the total broad gauge route. In addition, the expansion of metro networks across urban areas is driving the demand for dry-type transformers, which are generally installed in metro stations. Further, transformers over the age of 20 years need to be replaced in a phased manner, which is a potential growth area for the renovation and refurbishment business. Domestic transformer manufacturers also stand to gain from the ban on power equipment imports from China, which has been supplying low-cost products in the Indian market. 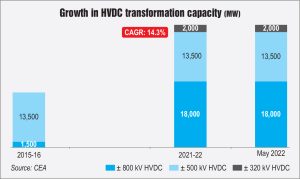 Smart transformers, which can independently regulate voltage while allowing re­mote operation, are an integral com­po­n­ent of digital substations. Green tra­ns­for­mers come with the features of low noise levels, better safety against fire due to the use of ester oil, and a lower carbon footprint. Meanwhile, dry-type transformers are solid state devices comprising an air-filled, pressurised and sealed tank with core windings. In ester-filled transformers, natural esters are used for liquid in­sulation of the transformer vis-à-vis mineral oils used in conventional transformers, thereby providing these transformers with fire-retardant properties. Converter transformers are deploy­ed in HVDC projects to convert the generated electricity into DC and then back to AC for power consumption. Flexible transformers can adapt to a range of vol­tage ratios and impedance levels, and can therefore be deployed for a variety of applications by utilities. Ph­ase shifting transformers are special purpose transformers, used to control the active po­w­er flow in the network by regulating the phase of line voltage. Finally, coupling transformers are used in flexible AC tra­nsmission systems to enhance the con­trol and stability of the system and inc­re­ase its power transfer capabilities. Op­eration and maintenance practices for transformers have also seen a shift in re­cent times, with utilities increasingly fo­cusing on reliability-centred maintenance and condition-based monitoring for these critical assets.

Increasing commodity prices, the rise in crude oil rates and growing inflation have affected transformer manufacturers significantly. The prices of key commodities such as aluminium, copper and cold-rolled grain-oriented (CRGO) steel, used in the manufacture of transformers, as well as that of transformer oil, have increased tremendously – in the range of 25-90 per cent – in the past year and a half. As per the Indian Elec­trical and Electronics Manufac­turers (IEEMA), the price of aluminium has increased by 85 per cent, copper by 80 per cent, CRGO by 60 per cent, steel by 50-80 per cent, polymers by 50-90 per cent and transformer oil by 25 per cent during this period. In a recent statement, the IEEMA has requested purchasing organisations to incorporate price variation clauses in all future and existing contracts, at least for unfinished supplies. This will help in mitigating the price surge of raw materials and protect the financial health of suppliers, contractors and vendors in the long term. While the volatility in raw material pri­ces is a cyclical phenomenon, it may hamper manufacturers’ ability to supply equipment such as transformers for critical T&D projects, if left unaddressed in the long term.

These challenges notwithstanding, the long-term drivers for transformer dema­nd and the outlook for the country’s power sector remain positive.

During the month of August, 2021, I had good opportunities of participating in two important Webinars on issues concerning problems in the Electricity Distribution Sector in India which are creating a very ad­verse impact on the entire power supply chain […]

India’s power transmission segment is growing at an unprecedented pace, mainly due to the thrust provided by the recent policy and regulatory developments, as well as government initiatives. The pace of expansion is expected to […]

The need to replace ageing and obsolete transmission and distribution infrastructure, high investments, right-of-way constraints and long gestation periods involved in building new networks have brought to the fore the concept of reconductoring. It refers […]