The short-term power trading market has evolved significantly. During 2021-22, short-term trading volumes were recorded at 186.75 BUs, of which the power exchanges accounted for 54.3 per cent by achieving an all-time-high volume of 101.45 BUs. This indicates a major shift in the Indian power market that has been largely dominated by bilateral deals. In April 2022, with the market clearing prices frequently touching Rs 20 per unit on the back of rise in temperature (resulting in early onset of summer) and an increase in economic undertakings with the lifting of Covid-related restrictions, the Central Electricity Regulatory Commission (CERC) imposed a price ceiling of Rs 12 per unit across all segments till June 2022, which was later extended till September 2022. However, due to a price cap of Rs 12 per unit, the generators that have high variable cost are unable to participate in the market. In this background, the Ministry of Power (MoP) has proposed to introduce a high-price market segment for the day-ahead market (DAM) within the existing integrated-DAM.

The short-term power trading market has emerged as a necessary tool for merchant and stressed power plants for maximising their revenues. For consumers, especially commercial and industrial, sourcing power through the short-term route results in significant cost savings by avoiding the high cross-subsidy charges imposed by discoms. In addition to competitive prices, the power exchanges offer a highly liquid and transparent mechanism. This has led industrial consumers to turn to the exchanges over the years. Data from the CERC shows that over 5,400 open access (OA) consumers procured power through the two exchanges during 2020-21, signifying the growing participation by industrial consumers. On both the power exchanges, OA industrial consumers bought 14.38 BUs of electricity. 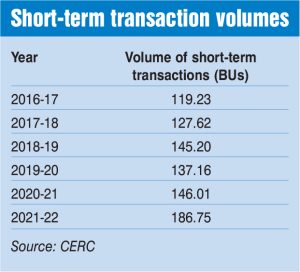 During 2021-22, short-term trading volumes were recorded at 186.75 BUs, which accounted for 14.1 per cent of the total generation (excluding generation from renewable energy and captive power plants) during the year. The short-term market has shown an increase of 27.9 per cent during 2021-22 over 2020-21, when 146.01 BUs was traded. Since 2016-17, the volume of short-term transactions has grown at a compound annual growth rate (CAGR) of around 9.4 per cent, while power generation has grown at a CAGR of 1.24 per cent.

Of the total volume transacted in the short-term market during 2021-22, the volumes traded through power exchanges accounted for around 54.3 per cent (101.45 BUs). The remaining share came from volumes transacted through trading licensees, deviation settlement mechanism transactions and bilateral transactions between discoms that accounted for shares of 21.1 per cent (39.47 BUs), 13.5 per cent (25.27 BUs) and 11 per cent (20.56 BUs) respectively.

DAM: During 2021-22, an aggregate volume of 65.19 BUs was transacted on the two power exchanges in the DAM segment, which is the electricity trading market for delivery on the following day. This was an increase of 7.5 per cent from the 60.62 BUs recorded in the previous year. The IEX accounted for a major share in the DAM as 65.14 BUs was traded on its platform, while the remaining 0.04 BUs was traded by PXIL. The IEX’s trading volume in the DAM has grown at a CAGR of over 10.4 per cent from 2016-17 to 2021-22.

Green DAM (GDAM): With the launch of GDAM on October 25, 2021, any interested party can set up renewable energy capacity and sell it to discoms and industries. Advantages of free interstate transmission systems (ISTS) will be available and open access will be granted within 15 days. In the five months of operation during 2021-22, a total volume of 0.92 BUs has been traded in the GDAM, all of it on the IEX.

Real-time market (RTM): Launched by PXIL and the IEX in June 2020, the RTM allows 48 sessions of half an hour each in a day, which means the trading of electricity is done round the clock and power delivery can be scheduled at intervals of one hour. Trading in the RTM has exceeded market expectations, with the RTM trading volume recorded at 19.91 BUs during 2021-22, as compared to 9.47 BUs during the 10 months of operation in 2020-21. During 2021-22, the entire volume was traded on the IEX. The RTM accounts for around 20 per cent of the overall power traded on the power exchanges during 2021-22.

After a long halt of 16 months, the two power exchanges resumed renewable energy certificate (REC) trading in November 2021 in line with the orders of the Appellate Tribunal for Electricity and the CERC. REC trading was suspended in July 2020 by APTEL upon hearing three separate petitions related to the fixing of floor and forbearance prices by the CERC. During the five months of 2021-22, a total of 8.46 million RECs were traded on the two exchanges. Of these, 1.36 million were solar RECs and 7.1 million were non-solar RECs. Meanwhile, the market clearing volume of solar and non-solar RECs was 0.15 million and 0.77 million respectively during the three months (April to June) of trading during 2020-21.

Energy saving certificates (ESCerts) are issued to plants that have achieved excess energy savings over and above their targets. Units that are unable to meet the targets either through their own actions or through the purchase of ESCerts are liable to financial penalty under the Energy Conservation Act, 2001. After the issuance of ESCerts, designated consumers (DCs) are required to register as eligible entities before enrolling with the power exchanges for trading and bookkeeping of ESCerts. The trading of ESCerts takes place on the power exchange platform. The IEX commenced trading in ESCerts under the Perform, Achieve and Trade (PAT) Cycle-II on October 26, 2021. In the first transaction on October 2021, the exchange traded 43,409 ESCerts and in November 2021, it traded 242,733 ESCerts. Meanwhile, PXIL did not trade any ESCerts in October 2021; however, in November 2021, it accomplished trade in 13,375 ESCerts. Trading in ESCerts was paused until December 31, 2021 as per the directions issued by the MoP on November 25, 2021. As per the Energy Conservation (Amendment) Bill, 2022, introduced in the Lok Sabha recently, the central government may issue ESCerts to DCs having energy consumption less than the prescribed norms and standards. The defaulting DCs will be entitled to purchase ESCerts to comply with the prescribed norms and standards.

Several key developments took place on the power trading front in the past one year.

Commencement of operations of third power exchange: The Hindustan Power Exchange (HPX), promoted by PTC India Limited, the Bombay Stock Exchange and ICICI Bank, has commenced operations with effect from July 6, 2022, after receiving all the necessary approvals from the CERC. The exchange initially offered trading in contingency contracts, green contingency contracts and RECs. However, with effect from July 28, 2022, it also launched DAM, GDAM and RTM on its platform. Currently, over 175 members are already registered on the HPX and are expected to participate in these segments to meet their trading needs. In just two weeks of its operations, the HPX has achieved the milestone of crossing the 100 MU mark of traded power.

Price cap: The CERC, vide its order dated May 6, 2022, had capped the prices on power exchanges at Rs 12 per unit across all market segments till June 2022. Later, a review was undertaken and it was felt that the high demand for electricity is likely to continue over the next few months due to an increase in economic activity, high agricultural load, and an increase in household demand, which might put pressure on market prices once again. In order to protect consumer interests, the commission has extended the applicability of the order till September 30, 2022. Further, due to a price cap of Rs 12 per unit, the generators which have a high variable cost are unable to participate in the market. Against this background, the MoP has proposed to introduce a high-price market segment for the DAM (HP-DAM) within the existing integrated-DAM. The sellers with variable cost greater than the price cap of Rs 12 per unit will be allowed to sell power in this market. Only buyers who have a deficit and can afford to pay a high price will be able to participate in this segment.

Green Energy Open Access Rules, 2022: The central government notified the Electricity (Promoting Renewable Energy through Green Energy Open Access) Rules, 2022 on June 6, 2022. These rules have been notified for promoting the generation, purchase and consumption of green energy including energy from waste-to-energy plants. The rules will enable faster approval of green OA, uniform banking, voluntary purchase of renewable power by commercial and industrial consumers, and applicability of OA charges, etc.

The Indian power trading market has come a long way over the past decade and is geared for the next leap forward. New product launches, incremental trading volumes (approximately 100 BU opportunity for exchanges as plans to phase out coal plants are under way and no new long-term power purchase agreements have been signed for thermal power) and favourable policy and regulatory initiatives are expected to drive the growth of the power trading market in the next few years. Overall, the government aims to deepen the power markets by increasing the share of spot markets to 25 per cent by the year 2023-24.