The emission of untreated ash by coal-based power plants can have detrimental health effects on local inhabitants, besides polluting the air and water; hence, ash needs to be disposed or repurposed in a scientifically managed manner. The government has, therefore, encouraged the reuse of fly ash in building projects, construction of roads/highways/flyovers, backfilling of mines, etc.

In January 2018, the expert committee for effective fly ash utilisation made several recommendations pertaining to effective fly ash disposal and management. The measures suggested that tender/auction of fly ash should only be issued for end-user/industry and not for traders. It also recommended TPPs and end-users to consider entering into long-term agreements for fly ash supply. It also suggested that the government incentivise industrial units engaged in developing new methodologies for fly ash disposal and management.

In a key development, in January 2022, the MoEFCC introduced a revised notification that prohibited dumping and disposal of fly ash discharged by coal- or lignite-based TPPs. In addition, it has introduced the “polluter pays” principle, requiring the polluting TPP to pay a penalty for non-compliance. These two norms are designed with the aim of ensuring 100 per cent fly ash utilisation in all TPPs. The non-compliant entities will be forced to pay Rs 1,000 per tonne of unutilised ash to the Central Pollution Control Board (CPCB).

The government has also mandated all government, semi-government and private entities engaged in construction activities such as road construction, flyovers, etc., in a radius of 300 km from TPPs, to utilise fly ash in their construction. TPPs have to bear the cost of delivery and transportation of fly ash to project sites.

The MoEFCC expects TPPs to fulfil these mandates by April 2025-April 2027. Meanwhile, the government has given about 10 years for ensuring the correct disposal of unutilised accumulated ash. According to the Central Electricity Authority, there is around 1,738 mt of legacy ash yet to be utilised as of March 31, 2021. To put it in perspective, the volume of legacy ash is 7.5 times the volume of ash generated in 2020-21.

According to a notification issued in November 2021, all coal- and lignite-based TPPs are required to provide fly ash to end-users (like cement plants, brick kilns, road and construction agencies, etc.) through a transparent bidding process only. In the notification, the Ministry of Power has also stated that TPPs may continue to provide fly ash for national capital projects under their existing commitments based on transportation rates arrived at on the basis of transparent competitive bidding or state schedule of rates (whichever is lower). 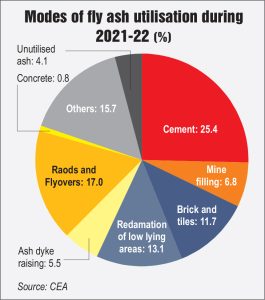 Also, in April 2022, NTPC Limited entered into an agreement with Energy Vault Holdings for deploying its gravity-based energy storage solutions. The collaboration will also see beneficial use of coal ash to manufacture composite blocks for Energy Vault’s gravity-based energy storage system. NTPC intends to manufacture composite blocks from fly ash. The ash composites have compression and flexure strength and surface hardness suitable for many engineering applications such as building products and infrastructure products. These composite blocks are more valuable than the use of ash in concrete and can also be utilised in reusable ash storage blocks, utility pole cross-arms and building products such as chair railings and base boards.

In February 2022, NTPC signed a know-how transfer for the production of Nano concrete building products and Aggregate Concrete (NAC) with the Institute for Solid Waste Research and Ecological Balance based in Delhi. NAC contains 65-75 per cent fly ash with minor cement content, in combination with other admixtures. Given that NAC can develop strengths as high as 50-100 megapascals meant that it could be deployed in the construction of buildings and roads. In general, concrete with NAC appears to behave like natural stone aggregate (NSA) and is, hence, suitable for structural applications.

The government, in cooperation with private entities and TPPs, has raised the extent of fly ash utilisation from 55 per cent in 2010-11 to 92 per cent by 2020-21. Nonetheless, there is still a huge volume of legacy ash that is yet to be disposed safely. Additionally, several TPPs engage in dumping legacy ash indiscriminately in nearby fresh water sources, in a bid to avoid managing and processing fly ash. Hence, the MoEFCC and the CPCB need to take effective measures to strictly monitor, regulate and ensure compliance among TPPs for effective fly ash disposal while creating attractive avenues for fly ash utilisation. The effective utilisation of fly ash has a two-fold utility, with one being reduced emissions, health-related problems and improved soil and water bodies. The other benefit is that fly ash will help end-users utilise it for various construction-related purposes, in turn, reducing their construction cost.

Therefore, it is imperative for the government, end-users, TPPs and other stakeholders of the fly ash segment to ensure that 100 per cent fly ash generated by TPPs, including legacy fly ash, is effectively disposed.