The country’s power generation segment is witnessing a major shift, with renewables replacing thermal power in the installed capacity mix at a fast pace. As of August 2022, the country’s installed capacity stood at 405.8 GW with coal- and lignite-based plants (210,699.5 MW) accounting for a major share of 52 per cent and renewables (116,077.64 MW) accounting for a share of 29 per cent. The share of renewables inches further upwards to nearly 40 per cent on the inclusion of large hydro (46,850.17 MW). This is significant, given that just a few years ago, in March 2015, coal’s share in the installed capacity mix was 68 per cent vis-à-vis renewables’ share of 14 per cent (and 29 per cent on including large hydro). Going forward, the pace of energy transition is expected to ac­celerate, given the central government’s focus on meeting its climate ch­an­ge targets. Indian Infrastructure provides an overview of the country’s power generation segment… 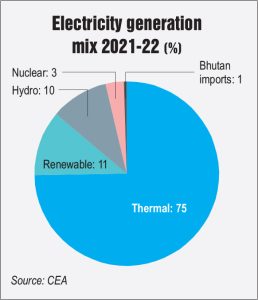 To the relief of thermal generators, the Ministry of Environment, Forest and Cli­mate Change has issued the Environ­me­nt (Protection) Second Amendment Rul­es, 2022, extending the deadlines for TPPs to install equipment to cut sulphur emissions by two years. The deadline for TPPs within a 10 km radius of Delhi-NCR and cities with a population of mo­re than 1 million has been extended fr­om Dec­em­­ber 31, 2022 to December 31, 2024. For TPPs within a 10 km radius of critically polluted areas or non-attainment ci­ties, the deadline has been pushed from Dec­ember 31, 2023 to December 31, 2025. For all other TPPs across the co­untry, the deadline has been pushed fr­om Decem­ber 31, 2024 to December 31, 2026. The power plant uni­ts declared to retire be­fore December 31, 2027 will not be re­qu­ir­ed to meet the specified norms for sulphur dioxide (SO2) emissions. This is a major relief for thermal ge­ncos be­cause flue gas desu­lphurisati­on systems have been implemented on­ly across 20 units aggregating 8,290 MW out of the total capacity of over 211.6 GW of coal-based capacity spread across 600 units, as of August 2022.

High international coal prices, post-pandemic recovery in electricity dema­nd, coupled with heatwaves in several parts of the country, and logistical constraints on coal transportation led to an increased de­ma­nd of domestic coal and reduced supply during summer months. In order to prevent the power crisis from escalating further, the central government ann­ounced several policy and regulatory me­a­sures in April 2022. These in­clude the Mi­­nistry of Power’s (MoP) di­rectives to gencos to blend up to 15 per cent imported coal and to imported co­al-based pow­er plants to produce at the­ir full capacity. Further, it has invoked Section 11 of the Electricity Act and ad­vised states to allow the price of coal to be pass-through.

In another development, in March 2022, the Cabinet Committee on Economic Af­f­airs extended the time limit by 36 mo­nths for 10 power projects, each with a ca­pacity of over 1,000 MW, in order to furnish documents required for becoming certified “mega” projects so as to av­ail tax benefits and bid for tenders re­gar­ding electricity supply. Earlier, the timeline for such power projects was to get over on March 31, 2022, after which the projects would have lost their bank gu­arantees. The move is expected to benefit companies such as GMR, Essar, Lanco and Torrent, among others.

In view of the increasing renewable en­ergy capacity, the government is looking at promoting storage technologies. In Mar­ch 2022, the MoP notified the “Gui­delines for procurement and utilisation of battery energy storage system (BESS) as part of generation, transmission and distribution assets, along with ancillary services”. The objectives of these guidelines are to facilitate the procurement of BESSs, as part of individual renewable power projects or separately, to address variability and firm up power supply from these projects.

In another positive development for the sector, the Andhra Pradesh High Court up­held the sanctity of power purchase agreements (PPAs) between developers and discoms in an order dated March 15, 2022, on the issue of PPAs being renegotiated by the Andhra Pradesh government citing poor discom health. The high court stated that the terms of the PPA cannot be altered and that tariff ca­n­not be renegotiated unilaterally. The order overturns the previous court or­d­er, dated September 24, 2019, which was passed by a single-judge bench of the An­dhra Pradesh High Court, permitting renewable energy developers to pay an interim tariff that was half the rate ag­reed upon, in their contracts, for all fu­ture and pending bills.

Captive power plants (CPPs) have rema­in­ed an important source of power supply to commercial and industrial (C&I) consumers. Rising grid power tariffs and interruptions in electricity supply by state utilities are key drivers for industries to set up CPPs to meet their baseload and/or back-up power requirements. These CPPs provide reliable pow­er supply at competitive rates, whi­ch is crucial for energy-intensive commercial and in­dustrial (C&I) consumers; however, do­mestic coal shortages and a spike in in­ter­national coal prices in recent mon­ths have crippled industries integrated with CPPs.

As per latest available estimates, the installed generating capacity of CPPs (of over 1 MW size) stood at 78 GW as of March 2020. Although coal-based CPPs have a major share in total captive power capacity, the recurrent shortages of coal and the decline in solar panel costs are driving C&I consumers towards renewable energy, especially solar. A number of large industries are installing renewable energy-based CPPs to meet their renewable purchase obligations, aside from their baseload/back-up power needs. For instance, in May 2022, Saint-Gobain In­dia and Sembcorp Green Infra’s subsidiary Green Infra Wind Energy signed a long-term energy supply agreement un­der which Sembcorp will install a 33 MW captive wind-solar hybrid project to po­wer Saint-Gobain’s manufacturing facilities in Sriperumbudur, Perundurai and Tiruvallur in Tamil Nadu. In the sa­me mo­nth, Indian Oil Corporation Limi­ted invited bids for the engineering, procurement and construction (EPC) of a 1.2 MW grid-connected captive solar pro­ject with a net metering facility at its LPG bottling plant at Sanand in Ahme­dabad district of Gujarat. Likewise, business conglomerate DCM Shriram appro­ved an equity investment of Rs 650 million for setting up a wind-solar hybrid re­newable power project for captive use. In April 2022, Goldi Solar commissioned a 100 kW solar project in Surat’s first textile market for the Avadh Group.

Group captives are also gaining traction among industrial consumers. These are CPPs set up by industries for collective use of multiple industrial or commercial consumers, which have 26 per cent equity in the project and must consume 51 per cent of the power produced, as per the Electricity Rules, 2005. A key benefit of the group captive model is that cross-subsidy surcharge and additional surch­arges are not levied on the power procur­ed by different consumers.

Coal shortages and outstanding dues from discoms continue to weigh on the generation segment’s growth. As of June 2022, the outstanding amount from discoms to independent power producers stood at Rs 1,017 billion, an increase of 4 per cent over the Rs 978 billion in June 2021 (as per data from PRAAPTI [payme­nt ratification and analysis in power procurement for bringing transparency in in­voicing of generators] portal). While the central government has taken adequate measures to address the current crisis, a sustainable solution needs to be looked at to resolve these issues and prevent recurrence of such crises in future.

The slow-paced resolution of stressed thermal assets is a key challenge in the sector. It is estimated that coal-based ca­pa­city of about 41 GW is stressed, ow­ing to issues such as lack of long-term PPAs, unviable tariffs in PPAs, lack of coal linkages, delays in project implementation and promoters’ inability to se­cure funding for completing the projects. As of January 2022, about 15.3 GW of coal-based capacity had achieved resolution. Re­ce­n­tly, in September 2022, NTPC acquired Jhabua Power Limited, which operates a 600 MW TPP in Madh­ya Pra­desh, through the corporate in­sol­ven­cy resolution process. Further, with the integration of renewable energy into the grid, TPPs need to incorporate flexibility in their operations. At present, the TPP fleet of NTPC Limited, the country’s lar­gest generator, can flex up to 55 per cent and some of its power plants have even tried up to 40 per cent as well, but the TPP fleet of state gencos is still operating at 70-75 per cent. The central government is taking steps to ensure that al­most the entire coal-based power plant fleet is able to flex up to 40 per cent in the next two to three years. Accordi­ngly, the Central Electricity Authority (CEA) has recently notified the draft flexible operation of TPP regulations for power plants. 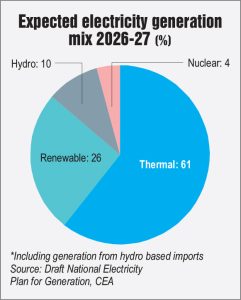 The draft plan also notes that apart from under-construction coal-based capacity of 25 GW, additional coal-based capacity required till 2031-32 may vary from 17 GW to around 28 GW. It is also seen that the BESS (5-hour) requirement in 2031-32 may vary from 51 GW to 84 GW. Over­all, the projection of the total capacity addition is in line with the target of the country to achieve a non-fossil based installed capacity of 500 GW by the year 2029-30. 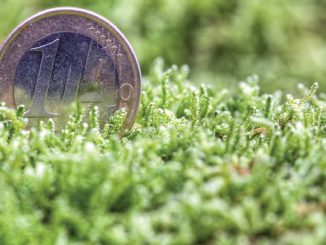 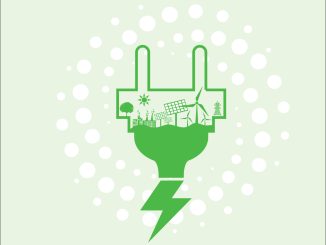 March 31, 2022
Setting a precedent for other states and safeguarding the interests of re­newable energy developers and investors, the [...]
More