A number of developments over the past several months indicate the strengthening of cross-border electricity trade (CBET) in South Asia, with India playing a pivotal role in it. CBET in South Asia is mostly being undertaken through the bilateral route and the share of the power exchanges is gradually inching up. Nepal and Bhutan are already participating in the day-ahead market (DAM) of India’ power exchange, and Bangladesh is likely to soon follow suit. In another development, in August 2022, NHPC Limited signed an agreement with the Investment Board Nepal (IBN) to develop two hydroelectric plants (aggregating 1,200 MW) in Nepal for sale of electricity to India and other neighbouring countries through PTC India.

CBET is crucial from the viewpoint of energy security in the South Asian region, especially in light of the current geo­political scenario. Following Russia’s invasion of Ukraine, global prices of fuels such as gas and coal have surged, adversely impacting the energy security in countries heavily dependent on imported fossil fuels for electricity. A case in point is Bangladesh, which has been suffering energy shortages for the past several months. Besides this, several other factors make CBET attractive in South Asia. These include complementarities in electricity demand and supply across the countries on account of varying primary sources of electricity supply, and the large untapped hydro potential in Nepal and Bhutan, which is significantly greater than the domestic power demand in these countries. CBET in South Asia will also lead to better resource utilisation and enhance renewable energy generation in the region, while facilitating a robust and reliable electricity grid. 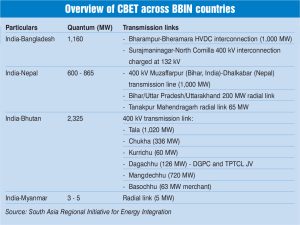 Bhutan exports its surplus power to India during the wet season, and imports power during the dry season. Out of the total electricity generated in Bhutan, 70 per cent is exported to India. Bhutan exports power from around 2,325 MW of capacity across its Tala, Chukha, Kurrichhu, Dagachhu, Mangdechhu and Basochhu HEPs. There was a significant reduction in exports from Bhutan during 2021-22 because of problems experienced at a hydropower station followed by an extended shutdown for rectification work. This resulted in Bhutan being a net importer of power during the winter months of 2021-22 and its buying power from the Indian Energy Exchange (IEX).

Nepal imports electricity from India to meet the demand-supply gap during the dry season, and exports electricity to optimally utilise surplus power during the wet season. A total of about 700 MW of power is being supplied to Nepal through interconnections. Nepal transacts power from India through both the bilateral and power exchange routes. While Nepal was a net importer of electricity in 2020-21, it became a net exporter in 2021-22. Sustained production from one of Nepal’s largest hydro power projects till date, the Upper Tamakoshi Hydropower Project, has helped the country improve its power supply situation. The project started commercial generation of electricity in August 2021 and has proved a game-changer project in Nepal’s electricity production.

With regard to Bangladesh, currently, the country imports power from 1,160 MW of capacity in India. Meanwhile, India and Myanmar trade electricity, but in relatively low volumes. India transmits power from 3 MW of capacity via an 11 kV transmission line (see accompanying table). 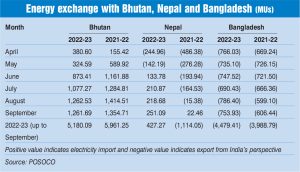 CBET through the power exchange route

To recall, a significant development in cross-border energy trade was the notification of the CBET regulation by India’s Central Electricity Regulatory Commission in 2019 and the subsequent promulgation of the CBET procedure by the Central Electricity Authority in February 2021. The procedure, among other things, enabled cross-border entities to participate on the DAM platform of the IEX.

Nepal has been a front runner in participating in the IEX’s day-ahead market. It started importing power via the exchange platform in April 2021 through the Muzaffarpur (India)-Dhalkebar (Nepal) line, and has been exporting power to India from 363 MW of capacity since November 2021. Reportedly, approval for the export of power from another 100-400 MW of capacity in Nepal is under consideration. Notably, till around mid-October 2022, Nepal has exported around 1.3 BUs of power to India and the average price of supply has been NR 7.91 per unit, generating a revenue of NR 7.93 billion for the Nepal Electricity Authority (NEA). Rising earnings from the export of electricity have helped the country maintain its foreign exchange reserves at adequate levels and reduce the trade deficit with India.

In another key development, in 2021-22, Bhutan, for the first time, imported power through India’s power exchange platform. Bhutan obtained approval to import up to 400 MW of power during January-March 2022 from the DAM on the power exchange through PTC India. The total volume transacted to date through the IEX is 135.4 MUs. Until now, Bhutan had imported power from India during the dry season through the bilateral route. The majority of the hydropower plants in Bhutan have been developed with Indian assistance and are currently selling power to India under bilateral arrangements. With the agreements for several HEPs expiring in the next few years, Bhutan will be able to sell more power through the exchange platforms.

The Bangladesh government too is in the process of participating on the Indian power exchange. This will help the Bangladesh Power Development Board to either buy or sell power through the power exchange platform as per the prevailing market conditions.

In August 2022, NHPC Limited signed an MoU with IBN to develop the 750 MW West Seti and the 450 MW Seti River-6 HEPs in Nepal. An MoU was signed between NHPC Limited and PTC India Limited for sale of power generated from these upcoming HEPs. As per the MoU, PTC will purchase the contracted capacity from NHPC from the date of commercial operation of the projects, for sale to state utilities, discoms and bulk power consumers on a long-term basis in India and neighbouring countries. Besides this, PTC will attempt to sell any untied capacity on a medium- and short-term basis or on the power exchanges.

PTC India has approved a plan to set up a power trading company in Nepal to supply power to Bangladesh, India and beyond (including Myanmar and Vietnam). This is the first-of-its-kind initiative for an Indian power company in Nepal and will bolster the government’s aim to build a South Asia-focused energy security architecture. The proposed company will act as an aggregator for trading power with neighbouring countries. While PTC India is expected to operate as a holding company for the Nepal entity, it may rope in a Nepal-based entity as a stakeholder for the new company.

In order to tackle its energy crisis, Bangladesh has reached an understanding with Nepal to import electricity from the latter’s HEPs through a trilateral agreement on power trade with India. To this end, the NEA has written to India’s NTPC Vidyut Vyapar Nigam for a trilateral energy sale and purchase agreement. Under this arrangement, Bangladesh will be able to receive 50 MW of hydropower from Nepal initially. Nepal and Bangladesh plan to trade power using the Baharampur-Bheramara cross-border transmission line that links India and Bangladesh. Meanwhile, the two countries have also agreed to take initiatives to reach a tripartite agreement with India to set up a dedicated transmission line between Nepal and Bangladesh using Indian territory. Bangladesh has already decided to buy 500 MW of electricity from the 900 MW Upper Karnali HEP to be developed by India’s GMR Group, which has set up GMR Upper Karnali Hydropower Limited to develop the plant in Nepal.

In another development, Adani Power recently stated that its upcoming ultra-supercritical 1,496 MW Godda coal-based power plant in Jharkhand is expected to be commissioned by December 2022. The corresponding transmission link (dedicated 106 kilometres long 400 kV transmission line from Godda to the interconnection point) is also expected to be commissioned by then. Power from the plant will be sold to Bangladesh Power Development Board under a cross-border electricity trade arrangement. Once commissioned, the plant will significantly augment India’s energy export to Bangladesh.

As per the Integrated Research and Action for Development, the power transfer potential of CBET in South Asia is expected to grow multifold, from around 18 BUs at present to about 100 BUs by 2030. Further, around 43.2 GW of cross-border inter­connection capacity is expected to be commissioned by 2040. The share of power exchanges in CBET is likely to grow in the future. Enabling the countries to sell and purchase electricity at the market clearing price based on prevailing demand and supply conditions allows more competitive and attractive price discovery.

That said, harmonising policy and regulatory frameworks and dispute resolution mechanisms across the South Asian countries is crucial to promote CBET in the region. In addition, strengthening cross-border transmission connectivity as well as the domestic transmission and distribution infrastructure is essential for the countries to reap the maximum benefits of CBET. 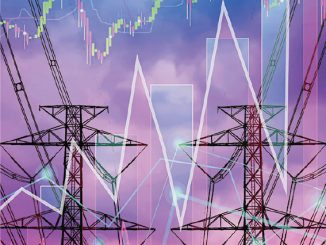 December 3, 2021
While all the cross-border electricity trade (CBET) in South Asia currently takes place bilaterally, the region is [...]
More 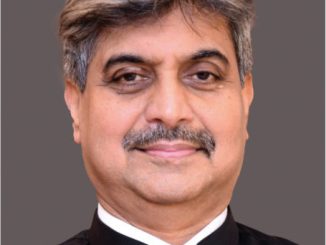 Interview with Dr Rajib K. Mishra
“The market design is undergoing a transformation”