The Central Electricity Authority (CEA) issued the draft National Electricity Plan (NEP) for generation in September 2022. The plan includes a review of the period 2017-22, detailed capacity addition requirement during the years 2022-27 and perspective plan projections for the years 2027-32. Prepared by the CEA every five years, the NEP provides short-term and long-term demand forecasts related to fuel, power consumption, etc. As per the draft plan, India may need an additional 17 GW to 28 GW of coal-fired power generation capacity by 2032 apart from the 25 GW thermal power projects that are under construction.

The draft NEP lays emphasis on demand-side management, energy efficiency and conservation, demand projections, generation planning, renewable energy sources, fuel and fund requirement, carbon emissions, energy storage system, etc. The draft policy has been put up for stakeholder feedback. The CEA has sought the comments of licensees, generating companies and the public to the first volume of the draft plan by December 5, 2022.

Power Line presents the key highlights of the draft NEP…

Review of the period 2017-22: As per the NEP notified in 2018, scheduled generation capacity addition from conventional sources was envisaged as 51,561.15 MW for the period 2017-22. While capacity totalling 30,667.91 MW from conventional sources (30,562 MW of coal and 105.91 MW of gas) has been achieved as on March 31, 2022, this also includes projects totalling 726.76 MW that were originally not scheduled for the period 2017-22 but have also been commissioned. Projects aggregating 21,620 MW have slipped on account of reasons such as delay in the placement of order for the main plant, slow progress of civil work, poor geology, legal issues and Covid-19.

As per NEP 2018, 22,690.5 MW was considered for scheduled retirement. Of this, coal-based capacity of 5,901.5 MW was considered for retirement due to old age and 16,789 MW (101 units) (as on August, 2017) was identified because of insufficient space for installation of flue gas desulphurisation (FGD) to control SOx emissions. Capacity totalling 10,044.295 MW for the period 2017-22 has been retired. This includes retired coal- and gas-based capacity aggregating 2,695.295 MW, which was not envisaged to retire during the aforementioned period.

The projected electrical energy requirement and peak electricity demand on an all-India basis is estimated at 1,874 billion units (BUs) and 272 GW respectively, and projections of energy savings for utility and non-utility are estimated to be 213 TWh. The projections of a reduction in energy demand through the implementation of various demand side management programmes is 398.49 BUs. A PSP-based storage capacity of 6.81 GW will be required to meet the projected peak electricity demand and energy requirement in 2026-27.

A cumulative generation of 1,968 BUs, comprising coal-based (1,158.8 BUs), gas-based (35 BUs), nuclear based (82 BUs), large hydro-based (189 BUs) (including generation from hydro imports), photovoltaic-based (326 BUs), wind-based (170 BUs) and small hydro-based (8 BUs) plants, is projected during the year 2026-27. This estimate is based on the generation planning studies to meet the projected hourly demand. The average plant load factor (PLF) of the total installed coal capacity of 239.3 GW was found to be about 55 per cent in 2026-27. In addition, the domestic coal requirement in the year 2026-27 has been estimated as 831.5 million tonnes (mt). The draft further states that the total fund requirement for the period 2022-2027 is estimated to be Rs 14.31 trillion, which also includes the likely expenditure during 2022-27 for advance action for the projects expected to get commissioned during 2027-2032. Additionally, the average CO2 emission rate from coal-based stations in the country has been declining, indicating improvement in efficiency of power generation from coal-based power plants. The total CO2 emissions projected will increase from 910 mt in 2020-21 to 1,030 mt in the year 2026-27. According to the draft plan, the average emission factor is expected to reduce to 0.524 kg CO2 per kWh in the year 2026-27. As per the draft NEP, the all India installed capacity is likely to be 622,899 MW at the end of 2026-27.

Plans and projections up to 2031-32: The projected electrical energy requirement and peak electricity demand on an all-India basis is estimated at 2,538 BUs and 363 GW for the year 2031-32. These projections include the impact of solar rooftop, green hydrogen, electric vehicle and energy efficiency measures. Projections of energy savings for utility and non-utility is estimated to be 404 TWh for 2031-32. The projections for the reduction in energy demand through the implementation of various demand side management programmes are 590.53 BUs for 2031-32.

The average PLF of the total installed coal capacity of 248.9 GW was found to be about 62 per cent in 2031-32. In addition, the domestic coal requirement for the year 2031-32 has been estimated as 1,018.2 mt and imports by plants designed on imported coal are expected to be 40 mt. 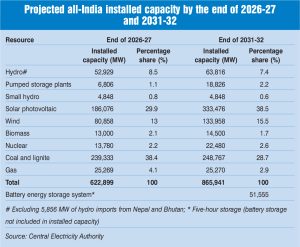 As per the draft NEP, the all-India installed capacity is likely to be 865,941 MW at the end of 2031-32. The total capacity addition projection is in line with the country’s target to achieve a non-fossil fuel-based installed capacity of 500 GW by 2029-30. 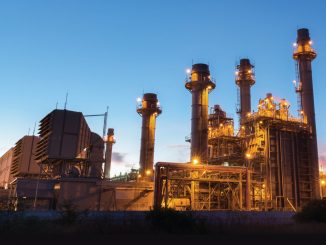