The 2022 United Nations Climate Change Conference held at Sharm el-Sheikh in November 2022 concluded with the landmark agreement to create the first-ever Loss and Damage Fund (LDF). The fund will provide financial as­sis­tance to the most vulnerable nations for loss and damage caused by climate-related disasters. The decision to set up the LDF at the 27th Conference of the Pa­rties (COP27) of the United Na­tio­ns Fra­me­work Convention on Clima­te Chan­ge (UNFCCC) comes after protracted discussions over the years and is being seen as a big step forward on climate action.

COP27 reached a historic agreement to create a Loss and Damage Fund, whi­ch has been under discussion for nearly three decades. The fund aims to provide financial assistance to the most vulnerable nations for loss and damage caused by climate-related disasters such as dro­u­ghts, floods, and rising sea levels. Vibh­u­ti Garg, director, South Asia, Institute for Energy Economics and Financial Analysis (IEEFA), explains, “Countries in the global south have been more vulnerable to such events. While they have not been historically responsible for emissions, which have led to increased incidences of events such as floods, wildfires and heatwaves, they are paying a big price. So, it is essential that these countries are protected and provided financial aid to cope with the loss in property and human resources.”

The governments have agreed to establish a “transitional committee” to make re­co­mmendations on how to establish the fund at COP28 next year and to operationalise the new funding arrangeme­nts. The first meeting of the transitional committee is expected to take place be­fo­re the end of March 2023.  As a part of the Sharm El-Sheikh implementation pl­an, the governments have also agreed to fully operationalise the San­tiago network, in­cluding establishing its institutional arra­ngements and supporting its mandated role in catalysing technical assistance for the implementation of relevant approa­ches at the local, national and regional levels for climate change mitigation.

While the finer details of operationalising the LDF, especially regarding its funding arrangements and the key beneficiaries, are yet to be finalised, the ag­ree­ment on setting up the fund is a welcome move. Anish De, global sector head, energy and resources, KPMG, ex­plains, “The inclusion of loss and damage in the statement and commitment to create a fund is a key positive.  While the details remain to be worked out, the commitment in concept is a key win for the global south. Moving on from commitments to the means or the ‘how’ of it was a very big step forward on key issues such as financing, decarbonisation technology (including hydrogen) and several other themes.”

India submitted its LT-LEDS at COP27. The strategy outlines India’s vision and action plan for achieving na­tio­nally determined contributions (NDCs) and the target of net-zero emissions by 2070. “The country joined a list of 57 other nations that have submitted their LT-LEDS so far. This shows India’s seriousness about climate change and how it is providing a favourable environment through the right policies and regulatory framework,” says Garg.

LT-LEDS emphasises two themes of “climate justice” and “sustainable lifesty­l­es”, alongside the UNFCCC’s principles of equity and common but differentiated responsibilities and respective capabilities. LT-LEDS has been prepared in the framework of India’s right to an equitable and fair share of the global carbon budget, which is the practical implementation of India’s call for “climate justice”. This is essential to ensure that the­re are no constraints in realising India’s vision of rapid growth and economic transformation, while protecting the environment. LT-LEDS is also informed by the vision of Lifestyle for the Envi­r­onment (LiFE), which calls for a worldwide paradigm shift from mindless and des­tr­uctive consumption to mindful and deliberate utilisation.

The approach to low-carbon development is based on the following four key considerations. Firstly, India has contributed little to global warming. Despite being home to one-sixth of the world’s population, India’s historical contribution to cumulative global GHG emissions is minuscule. Secondly, India has significant energy needs for development. Thirdly, India is committed to pursuing low-carbon strategies for development and is actively pursuing them, as per na­tional circumstances. And, lastly, India needs to build climate resilience. 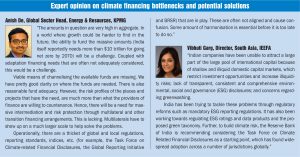 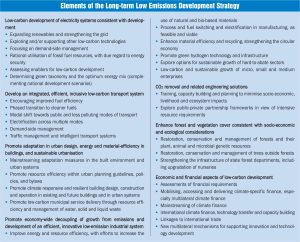 While COP27 achieved a major breakthrough with the agreement on LDF, several concerns on various other fronts of climate change mitigation and a just en­er­gy transition remained unaddressed.  “The world leaders have effectively given up on the ambition of containing global warming within 1.5 degrees. We are almost certainly out of viable pathways to control global warming. This al­so means that the funds required for containing the worst effects of climate change will be even higher. It will strain global finances even more. The promis­ed $100 billion each year for climate finance was reaffirmed but is yet to be fulfilled. Even more, a lot of this is coming as debt instead of grants, severely af­f­ecting countries that are already under a mountain of debt burden. Besi­des this, the resolution to cause emissions to pe­ak by 2025 was eliminated from the final decision text,” says De. Another expectation that COP27 failed to deliver on was to call for a phase-down of all fossil fuel use and to pass a resolution on a tentative coal/emission peak. Garg notes, “Given the energy security and development considerations, it is fair that a phase-down and not a phase-out app­roa­ch is adopted for developing countries. However, developing countries sh­ould announce a coal peak and work towards eventual phasing out coal. Also, the developed world should have adhe­red to phasing out all fossil fuels and not just coal if we are serious about limiting global temperatures to 1.5 degrees. I do hope that this is taken more seriously at the next COP and countries come out with a pathway for an accelerated phase-out of all fossil fuels.”

In conclusion, one of the key areas that need attention is the financing needs of climate action. The COP27 agreement has quantified the financial needs for climate action. It notes that $4 trillion per year needs to be invested in renewable energy up until 2030 to be able to reach net-zero emissions by 2050, and furthermore that a global transformati­on to a low-carbon economy is expected to require an investment of at least $4 trillion-$6 trillion per year. Going forward, how the developed countries deli­ver on their commitment to meet the financing needs of climate change by mobilising $100 billion per year will be closely watched. Another expectation, going forward, is to see money flowing in for adaptation purposes, and not just for mitigation efforts.