It may appear to be implausible in the context of the power sector; however, microgrids are seemingly the most practical solution to overcome the challenges being faced by the sector globally. The electricity industry has its roots in microgrids, which catered to a small number of consumers through decentralised generation until state-owned centralised power systems came up. They posed the need for long distance transmission and thereby led to the eventual establishment of the large grids that we see today. With the kind of economies of scale these plants offered, microgrids became less competitive and their concept faded. However, in recent years, there has been increased interest in microgrids, albeit in a more advanced and smarter way, owing to the issues discussed below.

More than a billion people across the globe do not have access to electricity and many of those who do, suffer from poor quality and unreliable supply. In addition to the unelectrified areas, the demand for electricity has been increasingly growing with respect to generation. The majority of the people who do not have access to electricity are in African or other developing nations, and within these countries, in rural areas. On the other hand, grids in the developed world are so well-connected that they provide electricity to almost all people. However, in case of a breakdown, the outage can be widespread and lead to unavailability of electricity supply for long durations. In both these scenarios, microgrids come to the rescue. Microgrids can help provide access to electricity in regions where the grid cannot reach or where extending the grid would entail unreasonably high costs. These can also operate in parallel to the main grid and provide support to the grid in case of outages and peak demand.

Microgrids have always existed, more so in recent decades. Problems, including the inaccessibility of the main grid to remote areas, the ageing of the infrastructure and increased widespread outages due to interconnectedness, have pressed for the need for microgrids. They have, however, evolved with time and become much smarter while making extensive use of renewable sources and advanced technologies.

The two main purposes that microgrids serve are: they provide access to electricity to people and areas where the main grid cannot reach, and they complement the main grid in hours of need and otherwise. It is estimated that of all the rural areas that remain unelectrified, more than 40 per cent are most suitable to be electrified through microgrids.

By improving access to electricity, microgrids become important catalysts in the economic development of a region. Microgrids provide an avenue for the integration of renewable energy, thus mitigating greenhouse gas (GHG) emissions and enabling sustainable development. Microgrids also offer the advantages of better demand management and energy efficiency, and leverage storage of energy. 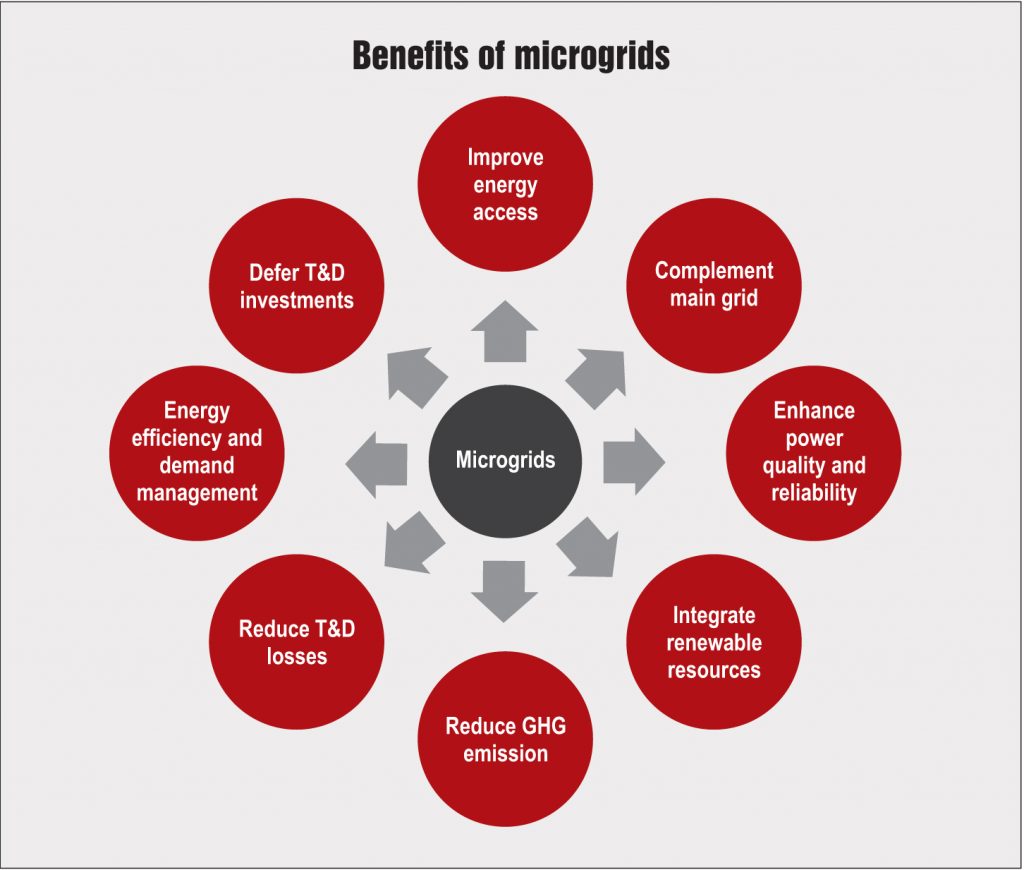 In developed countries where the grids are “too” interconnected, microgrids help by avoiding widespread outages and blackouts. In view of the blackouts that took place in the past due to extreme weather events or natural disasters, it is considered prudent to install microgrids connecting to some public services like hospitals, military establishments, important businesses and other critical infrastructure. In 2012, when Hurricane Sandy knocked out power to 8.7 million customers across 24 states, Princeton’s microgrid successfully provided electricity to various facilities in islanded mode for two days. Hence, microgrids lend resilience during such events and protect against power outages.

Further, while centralised grids have been able to cater to the growth in demand over the years, future grid expansion in already populated areas is difficult in view of right-of-way issues and public resistance. Microgrids can support the main grid in such cases and also during times of peak demand. In this respect, microgrids can be installed in industrial complexes, commercial hubs, residential societies and even individual buildings to provide local energy supply and also supply surplus to the grid, if any. Another benefit of microgrids is that they are much more suited to integrate renewable energy sources, which are intermittent in nature, as compared to a centralised grid. With the growing emphasis on the need for reducing GHG emissions and increasing the share of renewable energy, microgrids are the way forward. Microgrids also help in reducing transmission and distribution (T&D) losses as power does not have to be wheeled over long distances.

Microgrids vs grid extension as a choice for rural electrification

While microgrids can help in providing energy access to unelectrified areas, it is important to assess their suitability versus providing grid connectivity as the means for rural electrification. Some of the factors that may be considered are time taken in deployment, time to market, cost of supply and impact on climate change.

Providing grid connectivity could be faster in certain areas, while setting up a microgrid would be faster in very remote areas. With respect to cost assessment, the generation cost of grid power is lower. However, grid extension requires the setting up of new infrastructure, the cost of which can be huge in some cases. Further, the cost of supply also includes T&D losses, which tend to be higher in the grid and minimal in the case of microgrids due to the smaller coverage area. For microgrids, the requirement to have storage solutions can be a significant addition to the cost. Depending on the technology used, the impact on the climate can be assessed. Microgrids that use renewable energy reduce GHG emissions significantly; centralised generation on the other hand is dominated by fossil fuels. Further, central grid extension is done by the utilities, while microgrids can also be set up by private developers, communities and non-governmental organisations, in addition to the governments and utilities. Based on an evaluation of these factors, one or a mix of both the approaches can be used for rural electrification. 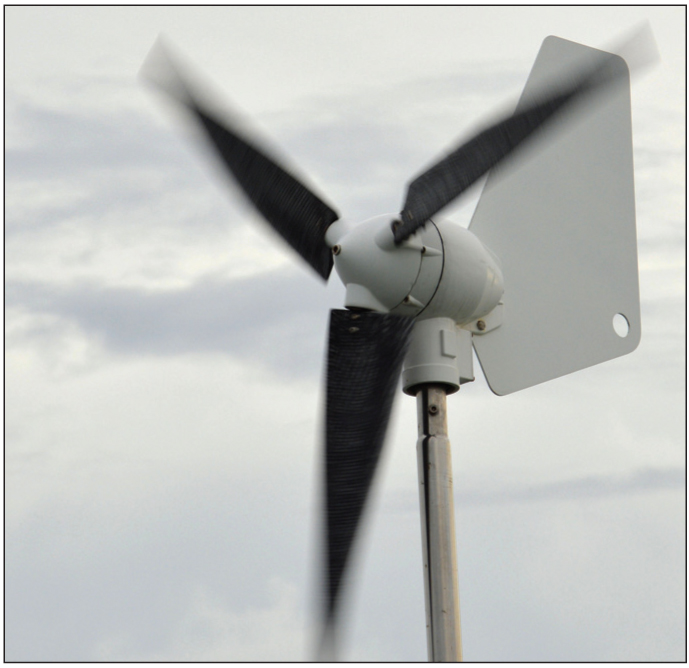 As per a recent report by Navigant Research, more than 1,400 microgrid projects have been identified worldwide (spread across more than 100 countries), representing around 13,400 MW of operating, under-development and proposed microgrid capacity. Most of these microgrids are located in remote locations. Key players executing microgrid projects across the world include ABB, Schneider Electric, Siemens, GE and Chevron Energy. Most of these companies provide advanced power and automation technologies, and clean energy solutions.

In terms of energy resources, the maximum capacity is fuelled by diesel. However, with increased emphasis on climate change mitigation and declining cost of renewables, greater integration of renewable energy sources like solar, wind and biomass is being observed. This is also evident from the fact that solar photovoltaic and wind have already become the leading resource choices for microgrids. With a bigger role of renewables in generation, consumers are also adding storage in order to mitigate intermittency issues.

Storage options give an added advantage of better demand management. According to a study by GTM Research, more than 40 per cent of the microgrid installations in the US have integrated battery storage options. However, various other technologies for energy storage such as flywheel, thermal, pumped hydro, compressed air and hydrogen are also being tried.

In India, renewable energy-based microgrids were pioneered in West Bengal towards the end of the twentieth century. Since then, approximately 125,000 rural households have been connected to microgrids. Chhattisgarh has implemented the largest number of mini-grids in India, covering more than 1,400 off-grid habitations. While initially microgrids were set up mainly by government agencies like the West Bengal Renewable Energy Development Agency and the Chhattisgarh Renewable Energy Development Agency, today there are a number of private sector players in the fray. The most important generation source for microgrids in India has been solar; however, biomass has seen a considerable increase in uptake. Even though renewables form a major part of generation in microgrids in India, the potential remains under-utilised due to the absence of appropriate energy storage technologies.

Advanced microgrids have already been deployed in developed countries. In developing countries, while several initiatives have been taken to promote microgrids in the past, impediments such as high capital costs, uncertain revenue streams, lack of awareness, limited financing and business models, inadequate investments and the lack of appropriate regulations have been hindering growth.

With a number of microgrids already in place in various parts of the world, the technology and equipment are available; however, their costs are very high. Apart from infrastructure costs, logistics costs too are typically high due to the remoteness of the areas covered. Moreover, since people in remote areas generally have low paying capacity and no commercial loads, there is always the uncertainty around the revenue stream, which is important for recovering the capital expenditure, and operations and maintenance costs. This creates a challenge for the microgrid business case. However, the cost of setting up of a microgrid has come down significantly over time making them a viable option in many scenarios. One of the ways to overcome this challenge is to use anchor loads for microgrids. Telecom towers, for example, can serve the purpose of anchor loads. While on the one hand, microgrids ensure reliable power supply to tower operators, on the other, this consumer segment serves as a source of comfort to microgrid developers by offering stable revenues.

Further, inadequate investments and financing options lead to fewer microgrid projects than desired and hinder the growth of microgrids in developing countries. Policy-level impediments also restrain the growth of microgrids. The lack of clarity in the current policy frameworks regarding interconnection standards (with the main grid), tariff determination for off-grid systems and the requirement of microgrid infrastructure to be grid-compatible are some of the factors that adversely affect the development of microgrids. Along with enabling policies, regulatory and utility acceptance is also very important for microgrid development.

In addition to the above-mentioned drivers, microgrids are emerging as a key solution for various global and national initiatives aimed at enhancing energy access and ensuring sustainable development. They are also a promising solution for private players which are affected by adverse power supply including industries and commercial centers. Recently, during CoP21 (Paris), 195 nations signed an agreement to combat climate change and pledged towards a low carbon, safer and sustainable future. The Sustainable Energy for All initiative, launched in 2011, aims to provide universal energy access and double the share of renewable in global generation by 2030. Similarly, the Government of India has come up with the Power for All programme, wherein it is supporting the state governments in achieving the objective of supplying 24×7 quality, reliable and affordable power to all consumers. Some of other programmes by the Government of India for rural electrification which also support microgrids are Remote Village Electrification Programme, Rajiv Gandhi Grameen Vidyutikaran Yojana, Decentralised Distributed Generation Scheme and Deendayal Upadhyay Grameen Jyoti Yojana. The smart grid roadmap for India also targets the setting up of microgrids in 1,000 villages, industrial parks and commercial hubs by 2017, and in 10,000 such locations by 2022, which can island from the main grid during peak hours or grid disturbances. As per Reji Kumar Pillai, President, India Smart Grid Forum (ISGF), “large ports, railway stations and airports make great places to install microgrids and are being explored by ISGF”. In light of such initiatives and campaigns, microgrids will certainly have a greater role to play in the near future.

Moreover, some areas in regions like Africa and India have very conducive conditions for wind and solar energy. These areas, which are otherwise out of the reach of the main grid, are ideal sites for the development of microgrids and renewable energy integration. According to industry experts, while North America leads the microgrid market today, going forward, the Asia-Pacific region is likely to emerge as the global leader for microgrid deployment, owing to its large and growing population that does not have access to electricity through the main grid. With all these developments taking place, there is little doubt that microgrids will not only coexist with the main grids but will be deployed in greater numbers in the future.