Of late, the solar segment has witnessed a steep reduction in tariffs – falling as low as Rs 4.34 per unit. This can be attributed to a host of factors including heightened competition and technology advancements. Concurrently, the Central Electricity Regulatory Commission (CERC)-determined benchmark capital cost for solar projects has also witnessed a downward trend, with a reduction in the cost of civil and general works, mounting structures, evacuation infrastructure, etc.

There has been a significant shift in the approach and principles for feed-in tariff determination across states. Many states are not regular in notifying their tariffs, leading to regulatory gaps. This has become more common of late due to the increasing focus of states on competitive bidding. For instance, Haryana, Bihar and Odisha have not updated their solar tariffs in the past two years. Meanwhile, Haryana, Punjab, Madhya Pradesh, Chhattisgarh and Uttar Pradesh have not yet announced their tariffs for 2015-16.

Under competitive bidding, solar tariffs in India have come down by 40 per cent in the past two years, from Rs 7.31 per kWh quoted for a solar tender announced by Chhattisgarh in April 2014 to Rs 4.34 per kWh offered by Fortum Finnsurya Energy for a 70 MW project in Rajasthan for a tender announced by NTPC under the Jawaharlal Nehru National Solar Mission (JNNSM). Andhra Pradesh was the first state in the country to witness a steep reduction in solar tariffs, which declined to Rs 4.63 per kWh under the open category in November 2015. Other states that witnessed significantly low solar tariffs were Maharashtra (Rs 4.41 per kWh), Uttar Pradesh (Rs 4.78 per kWh) and Karnataka (Rs 4.80 per kWh).

In addition, the Solar Energy Corporation of India (SECI) is inviting bids under the viability gap funding (VGF) scheme, which is also helping bring down solar tariffs. Under the scheme, developers are seeking low VGF due to increasing competition, resulting in a reduction in government payouts for the allotted solar projects. Under JNNSM Phase II Batch I (open category), the VGF amount was reduced to Rs 1.7 million per MW. As a result, the central government reduced the fixed tariff under the VGF scheme to Rs 4.43 per kWh in 2016 from Rs 5.43 per kWh in 2015.

However, this affected the bids received by SECI for the 500 MW VGF-based tender in Maharashtra, for which the base price was fixed at Rs 4.43 per kWh. Only one bid was received of Rs 4.41 per kWh for this tender, which was lower than the base price. In contrast, bids for NTPC’s 500 MW tender in Rajasthan were in the range of Rs 4.34-Rs 4.36 per kWh, without VGF benefits. This can be attributed to the fact that in Maharashtra the solar projects will be developed outside government solar parks and land acquisition would be a challenging task for developers, particularly for large-sized projects. In addition, the market’s higher risk perception of SECI as an offtaker in comparison to NTPC is likely to have had an upward impact on the bids. 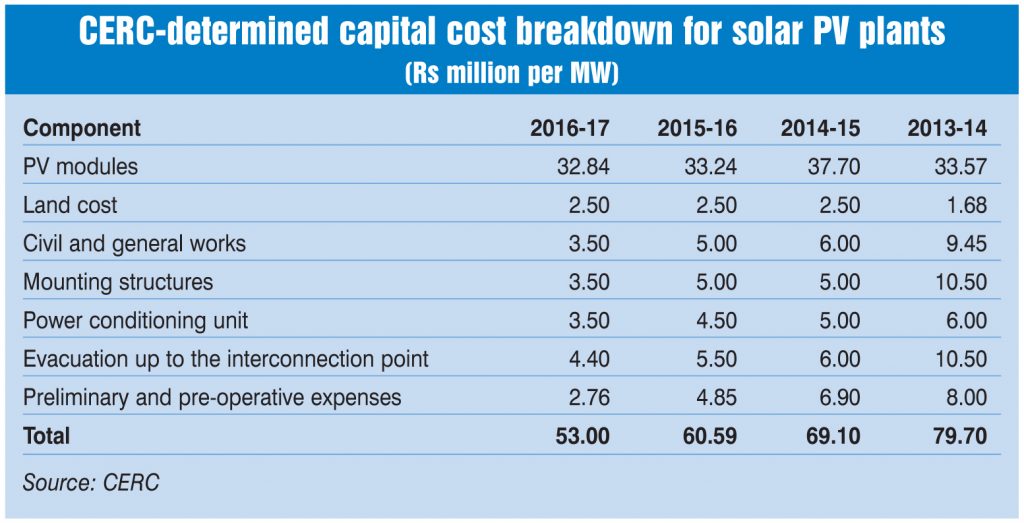 In 2015-16 (April 2015 to January 2016), the prices of solar modules remained stable. A significant trend in module prices is that domestically manufactured modules are more expensive than most imported modules, especially those imported from China. This has resulted in developers as well as engineering, procurement and construction (EPC) contractors sourcing modules from international markets for Indian solar projects. Country-wise, as of January 2016, the price of modules from Japan and Korea stood at $0.72 per Wp, from China at $0.72 per Wp, and from Taiwan at $0.52 per Wp.

Another feature of solar module prices is that the discovered spot prices for modules are typically higher than bulk prices as companies for large megawatt-scale projects negotiate the module prices. Currently, the prices of modules deployed in the Indian market are in the range of $0.43 per Wp-$0.50 per Wp.

One of the key non-module components of solar photovoltaic (PV) plants is the land. The land requirement for solar PV is around 5 acres per MW. Typically, the land used for utility-scale projects is arid/barren and the cost of land varies from state to state. Further, with the recent slump in the real estate market, land prices have recorded a downward trend.

Another component of solar plants is the power conditioning unit, which for grid-connected plants typically consists of an inverter. Although inverter prices have reduced over time, their efficiency continues to increase. At present, the good quality inverters that are being deployed in Indian projects are available for Rs 2.7 million to Rs 3 million. Another component of solar plants is the mounting structure, which is made of stainless steel – either hot-dipped galvanised steel or pre-galvanised cold-rolled steel. While the price of steel has been fairly steady over the past several months, the wholesale price index for zinc (which is used to galvanise steel) has reduced since January 2015. 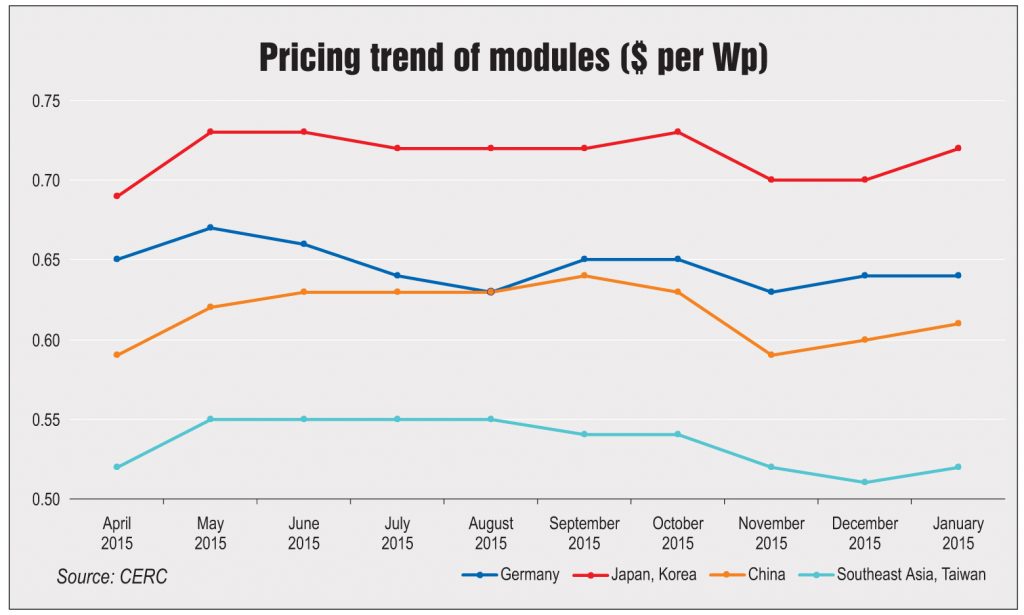 Some of the other cost components of solar plants include civil and general works, and evacuation infrastructure. The cost of civil work (preparation of terrain for digging, levelling and mounting; building a control room to house the inverter and other balance of system components) and general work (security of the solar farm, setting up power back-up generators, etc.) is  typically lower if the project developer has an in-house EPC arm. The cost of evacuation infrastructure comprises the cost of transformers and all DC and AC cabling up to the interconnection point. Depending on the local norms for the voltage level at evacuation, the costs may vary. The cost also depends on the size of the project.

Net, net, although the decline in solar power tariffs is a positive trend, it is necessary to ensure the viability of delivering power at these tariffs. Besides this, in the wake of declining capital costs, it is critical to ensure robust operation of the plants.