The rising population levels coupled with the rapid pace of urbanisation and industrialisation have led to a significant increase in electricity demand in recent times. However, supply has failed to keep pace with the growing demand. To maintain equilibrium, a number of measures need to be taken  for managing demand and improving end-use energy efficiency. In this regard, the adoption of demand-side management (DSM) practices could prove effective.

DSM is an effective means to create a low-carbon electricity scenario and improve energy efficiency. DSM programmes involve selection, planning, and implementation of measures, that have an impact on the demand or consumer side. These programmes help shape the energy consumption pattern of users in order to reduce the peak-to-average power ratio in load demand and use the available generating capacity more efficiently.

Energy efficiency programmes focus on reducing the overall use of specific technologies to bring down the overall energy use. For example, as a part of such programmes, consumers may be encouraged to replace the existing standard light bulbs with compact fluorescent lamps (CFLs) or LEDs. Lighting is just one of the many end uses that are targeted in DSM programmes.

Demand management also includes the adoption of load management programmes, which aim to determine an effective strategy to bring down peak load. Load management programmes redistribute energy demand to spread it more evenly throughout the day. These programmes allow energy users to act as “virtual power plants”, who help in stabilising the grid by voluntarily reducing or increasing the demand. Such programmes also involve implementing time-of-day (ToD) tariffs, charging the consumer different rates depending upon the time of usage during the day. ToD tariffs are generally implemented to reduce electricity consumption during peak hours. To this effect, electricity is made expensive during peak hours to curtail demand. Meanwhile, tariff is reduced during off-peak hours to incentivise consumers to increase consumption during this period. The major advantage of this mechanism is that it encourages voluntary participation as it provides consumers with an opportunity to reduce their electricity bills.

Load building programmes also form an essential component of a balanced DSM strategy. These programmes increase energy use during some periods by promoting cost-effective electrical technologies, which operate primarily during the period of low electricity demand. Such programmes are effective when the utility intends to increase the overall load factor, or wants consumers to switch to conventional electricity from an alternative fuel source.

In India, DSM started in the mid-1980s with the formation of an energy conservation cell in the Department of Power and the development of an energy management centre in 1989. Further steps taken towards the promotion of DSM for balancing demand and supply include the introduction of the Energy Conservation Act in 2001, the establishment of the Bureau of Energy Efficiency (BEE) in 2002 by merging the erstwhile Energy Management Centre, and formulation of policies and legislations such as the Electricity Act, 2003 and the National Electricity Policy, 2005.

While initial attempts were focused more on energy conservation, DSM programmes began to focus on a wide range of applications during the Tenth Plan (2002-07) including lighting, agricultural pumping, awareness creation, and ToD tariffs. The Bachat Lamp Yojana (CFL promotion scheme) and the Domestic Efficient Lighting Programme (DELP) (LED promotion scheme) are flagship DSM programmes in lighting. However, the DELP has been recently renamed Unnat Jyoti by Affordable LEDs for All (UJALA).

In addition to lighting, various utilities have undertaken programmes for energy efficient air conditioners, refrigerators, ceiling fans, water pumps, etc. Some of the DSM programmes undertaken in India are the Lighting Initiative of the Bangalore Electricity Supply Company, the Agriculture DSM programme in Maharashtra, and the Municipal Water Pumping Programme in Gujarat.

Apart from utility-driven DSM measures, there have been efforts to implement DSM by energy service companies like Energy Efficiency Services Limited, the Bureau of Energy Efficiency, the Ministry of New and Renewable Energy, the Indian Renewable Energy Development Agency and other government agencies. The BEE’s efforts can be seen in its programmes like Star Labelling and the Perform Achieve Trade scheme. 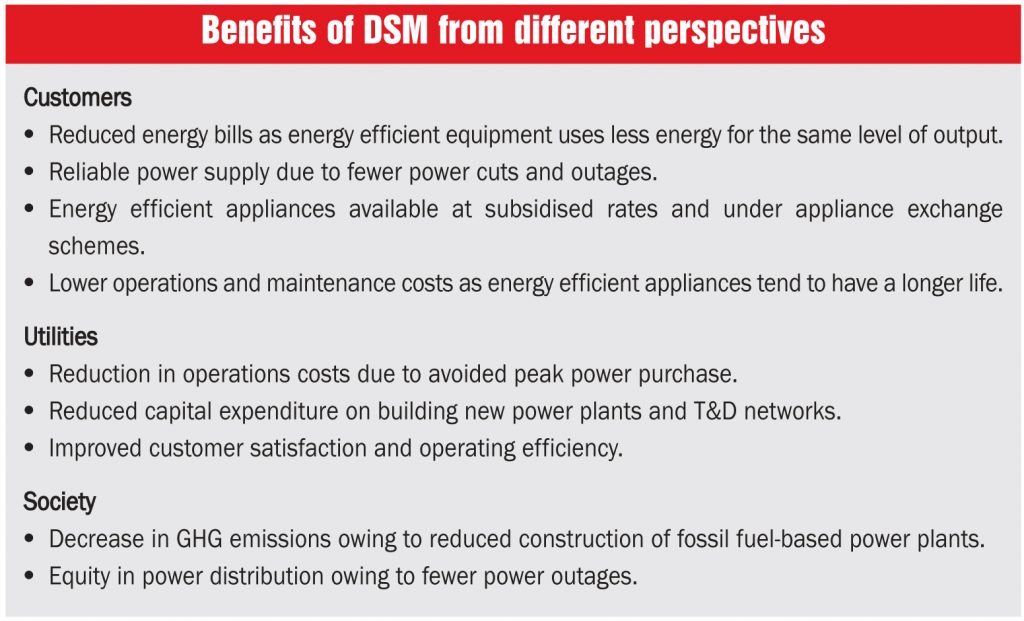 Regulations are imperative for enabling effective DSM by discoms, which in turn will help maintain grid stability. In this regard, model DSM regulations were issued by the Forum of Regulators in May 2010 with the aim of assisting the states in preparing their respective DSM regulations. The model regulations outline the DSM objectives and targets to be set by state electricity regulatory commissions (SERCs) for distribution licensees. As per these regulations, the SERCs are required to issue guidelines on load and market research; oversee the implementation assessment, monitoring and reporting of DSM programmes; and evaluate, measure and verify the savings achieved through them. Meanwhile, the regulations require the distribution licensee to constitute a DSM cell with a team of dedicated officials who have the authority to undertake the responsibilities envisaged under these regulations.

Challenges and the way ahead

In addition, state regulators need to provide the required regulatory backing to ensure strict compliance with government policies on DSM in their respective states. Moreover, steps need to be taken towards developing consumer acceptance for these programmes as it remains a crucial factor in their successful implementation.