The country’s power demand is seasonal and weather sensitive. In addition, there is a major difference in power demand at different hours of the day, with variations during peak hours and off-peak hours. The short-term market is, thus, playing an increasingly important role in meeting this demand-supply gap, especially for industrial consumers. In recent years, the market has seen a rise in participation by industrial consumers and captive power producers (CPPs), both for sourcing competitive power and selling surplus captive power.

The short-term market provides a non-discriminatory platform and national-level access to participants for transparent price discovery. It provides a number of options for power procurement including buying power directly from generators through one-to-one contracts, from power trading licensees wherein traders have contracts with the generator, from power exchanges, and through unscheduled interchanges (which is essentially a grid management tool, but is used by suppliers and distribution companies to feed or draw power over and above what is scheduled). Overall, the share of short-term market transactions in total power generation has increased from 6.1 per cent in 2008-09 to 10.6 per cent in 2015-16.

Interstate trading licensees have been undertaking electricity trading since 2004. The number of traders engaged in trading bilaterally or through power exchanges increased from four in 2004-05 to 28 in 2014-15. The top 10 traders accounted for 88.4 per cent of the total volume of electricity traded through trading licensees in 2014-15. The increased competition has resulted in a rise in volumes and a decline in prices in the short-term bilateral market.

Licensed power traders have a broad-based product portfolio ranging from same-day delivery contracts to long-term power purchase agreements. These include products like round-the-clock (RTC) power, evening or morning peak, and other than RTC and peak (including afternoon or night off-peak power). Within these categories, they also provide specific products like day-ahead, first come, first served, specific time blocks for 6 to 18 hours, weekend or holiday power, and energy banking.

Of all the available options, power exchanges have witnessed significant growth over the years. The Central Electricity Regulatory Commission (Power Market) Regulations, 2010 have given a further impetus to the power exchanges. About 30 per cent of the total power in the short-term market was traded through exchanges in 2015-16. The major sellers of electricity through the power exchanges include state utilities, independent private producers, private distribution licensees and CPPs. Meanwhile, industrial consumers are the major buyers of electricity through the exchanges.

There are currently two energy exchanges in India – the Indian Energy Exchange (IEX) and Power Exchange India Limited (PXIL) – which provide an automated online platform for physical day-ahead contracts. The IEX started operations in June 2008 and PXIL began operations in October 2008. The IEX is the bigger of the two exchanges, with a share of nearly 99.6 per cent in terms of volumes transacted in 2015-16.

Day-ahead market contracts are the most popular on the exchanges. A day-ahead market is a one-day-ahead delivery-based market for carrying out transactions for any 15-minute time block or for the duration of one hour, or for all 24 hours. Prices on the exchange are discovered for every 15 minutes, after aggregating the buy and sell requests posted at the exchange using an advanced algorithm based on the economic principle of demand and supply. The exchange also covers the risks associated with trading as buyers are required to pay in advance whereas sellers get paid after delivery. 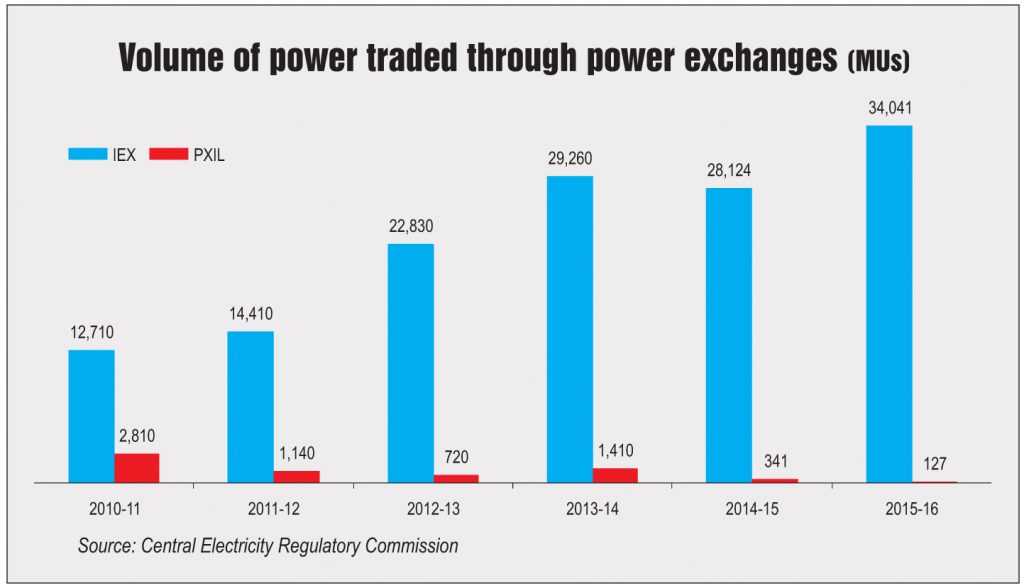 The short-term power market has still not unlocked its true potential. While it offers significant benefits to industrial consumers, there are a number of challenges that deter them from opting for this route. Among the major impediments are the ineffective implementation of open access in distribution and the unwillingness of the states to allow open access over concerns of losing high-paying industrial consumers. States like Punjab, Madhya Pradesh, Andhra Pradesh, Tamil Nadu, West Bengal and Odisha have increased the applicable charges. Other challenges for the power trading market are network constraints and inadequate interregional transmission capacity. Further, due to the poor financial health of the distribution companies, they are unable to buy power and have to resort to load shedding.

There is a need to introduce new market products such as capacity trading, ancillary services, forwards, futures and transmission rights. The introduction of forwards and futures on the power exchanges will enable higher liquidity and depth in the short-term power market, while forward delivery-based contracts will provide an additional window to the players to tie up electricity.

To conclude, the power trading market has the potential to provide greater predictability in prices and availability to industrial consumers, provided access to the transmission and distribution network is granted in a fair and non-discriminatory manner and new products are introduced to meet the ever-increasing demand of the industrial segment.