Incorporated in May 2005, Maharashtra State Power Generation Company Limited (Mahagenco) is the largest state power generation company and the second largest (after NTPC Limited) in terms of installed capacity. It is a wholly owned subsidiary of MSEB Holding Company Limited, a Government of Maharashtra undertaking. The company has seven thermal power plants (TPPs), three hydropower plants and some small-scale solar plants. It also owns a coal block in Chhattisgarh.

In the past two years, Mahagenco has added nearly 2,000 MW of capacity, while the year-on-year growth in power generation has been close to 4 per cent in the past two to three years. As with most TPPs in the sector today, its operational performance has also been poor, with an average plant load factor (PLF) of less than 55 per cent in the past two fiscal years. Meanwhile, its financial performance has been strong, with the   company posting profits consistently since 2010.

The company aims  to add over 5,000 MW of capacity over the next few years, which includes new supercritical projects in the state as well as outside. It is also gearing up to improve the existing plant performance and meeting new environmental norms. The company plans to overhaul almost 1,800 MW of its projects through renovation and modernisation, as well as install emission control systems in the existing projects (6,800 MW). It gradually plans to phase out all old and inefficient units.

Mahagenco is one of the key power producers in Maharashtra, accounting for over 40 per cent of the state’s total installed capacity. As of May 2017, its installed capacity stood at over 13,600 MW, of which coal-based power accounted for about 75.9 per cent (10,380 MW) of the fuel mix, followed by hydro with 17.6 per cent. Besides, the company owns and operates a gas-based station at Uran with an installed capacity of 672 MW and solar capacity of about 200 MW.

Of the total hydro capacity, the Koyna hydropower plant is the largest with a capacity of about 1,950 MW. The major coal-based plants include the Chandrapur thermal power station (TPS) (2,920 MW), the Koradi TPS (2,400 MW), the Bhusawal TPS (1,420 MW), the Khaparkheda TPS (1,340 MW) and the Parli TPS (1,170 MW). Around 1,820 MW of coal-based capacity was added in 2016 (the 500 MW Unit 9 of the Chandrapur TPS, and the 660 MW each Units 9 and 10 of the Koradi TPS). The Koradi TPS has, however, been under scrutiny due to its SOx emissions. The units have been commissioned without installing flue gas desulphurisation (FGD) technology even though the plant was given environmental clearance on this basis. The company has now been asked by the ministry and the pollution control board to install FGD.

Mahagenco has retired some of the old units that were identified by the Central Electricity Authority (CEA) due to uneconomical operations over the past two years. These include Units 1 to 5 of the Koradi TPS (4×105 MW and 1×200 MW), Units 1 and 2 of the Chandrapur TPS (2×210 MW) and Units 1 to 3 of the Parli TPS (3×210 MW). Against this phased-out capacity, the company is in the process of adding new supercritical units. It has already commissioned three units of 660 MW each at the Koradi power plant. 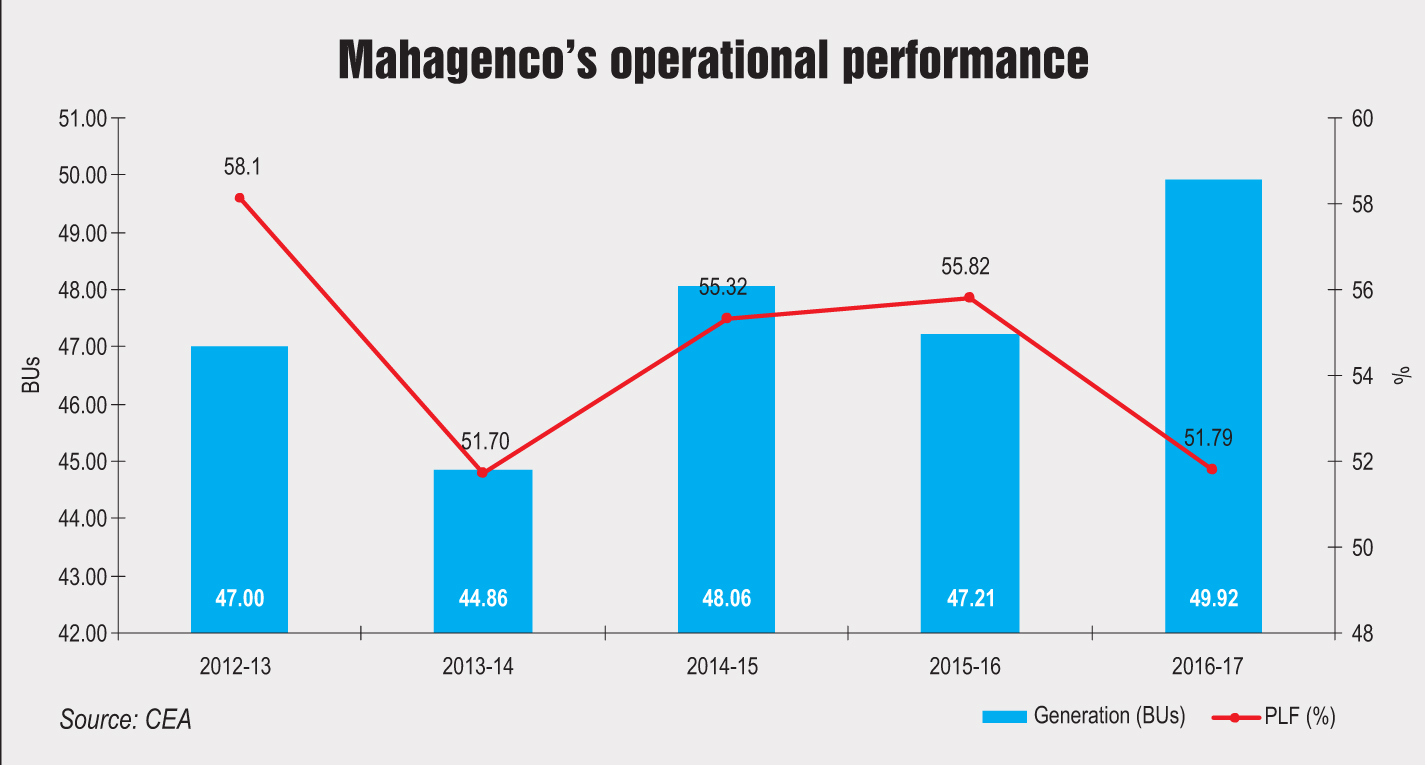 During 2016-17, the company generated 47,699 MUs, marking a growth of about 5.7 per cent over 2015-16 (47,213 MUs). The increase was largely due to the additional generation from the newly commissioned plants. Over the past five years, power generation witnessed a mixed trend while growing overall by around 6.2 per cent. In 2016-17, more than 85 per cent of the company’s generation was from its coal-based plants. Hydro- and gas-based plants accounted for 8 per cent and 6.5 per cent respectively.

The company’s overall PLF declined by 4 percentage points, from 55.82 per cent in 2015-16 to 51.79 per cent in 2016-17. It was significantly lower than the all-India average PLF of 59.88 per cent. Some of the plants, however, recorded PLFs of more than 60 per cent – Chandrapur TPS (64.6 per cent), Khaparkheda TPS (65.72 per cent), Nashik TPS (60.32 per cent) and Paras TPS (68.24 per cent). The Parli TPS recorded a very low PLF of around 17 per cent because of the shutdown of the majority of units due to water shortage. PLFs were also low due to poor power demand from the state discoms that have been buying power from other cheaper sources.

Mahagenco is planning to install new supercritical units and replace the old ones. The company plans to add one 660 MW unit at the Bhusawal TPS. The environmental clearance for the new unit has already been obtained. Further, some units would be phased out to create space for the installation of FGD. 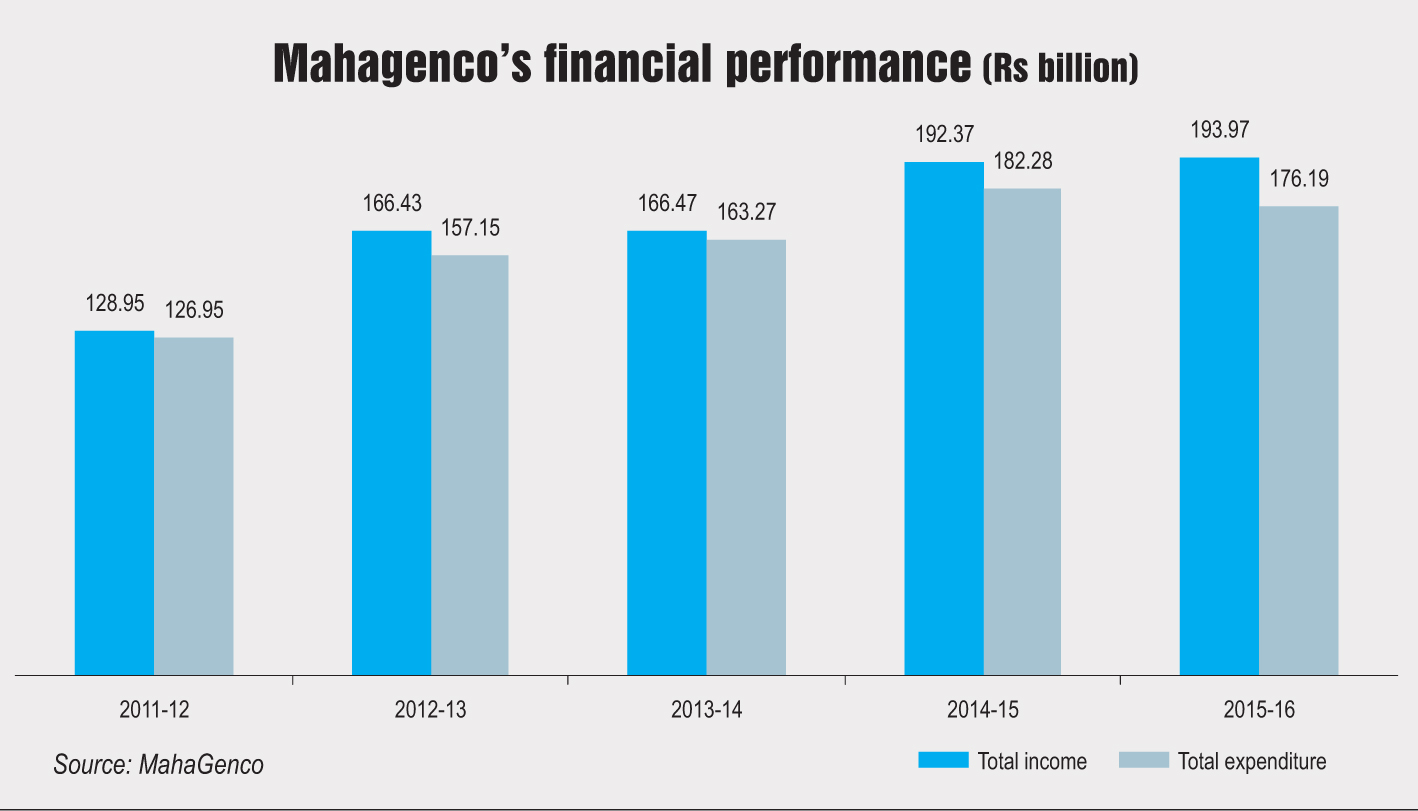 In order to meet the growing power demand for power in Mumbai, Mahagenco is considering capacity addition through a joint venture (JV) with the Tata Power Company. The company’s board has accorded in-principle approval for a coal-based TPP at Dehrand in Raigad district. The expected capacity of the plant would be 1,980 MW (3×660) or 1,600 MW (2×800). The company is expected to sign an MoU with Tata Power for the submission of the proposal to the Maharashtra government for project approval.

Mahagenco is also considering the setting up of a power plant in Chhattisgarh to utilise coal from the Gare Palma coal block allotted to the company. If implemented, this would be the first time that a state generation utility will set up a power plant outside its state. The plant is expected to help lower the price of electricity by reducing the transportation cost of coal. Reportedly, the company has already floated expressions of interest for social impact assessment, and rehabilitation and resettlement studies.

In June 2016, Mahagenco formed a subsidiary company, Mahagenco Ash Management Services Limited, which will look into the compliance of all Mahagenco’s TPPs with respect to 100 per cent fly ash utilisation as per the government’s policy. The company has three other subsidiaries – Mahaguj Collieries Limited, Dhopave Coastal Power Company Limited and Dhule Thermal Power Company Limited. While the latter two were incorporated for the implementation of power projects, Mahaguj is a JV with Gujarat State Electricity Company Limited, which was formed to undertake coal mining in Odisha.

While the company is looking at adding more capacity, it also needs to focus on the installation of FGD. As per the recent FGD implementation plan formulated by the CEA, the company is required to install FGD technology in order to meet the emission norms specified by the government.

Overall, the company is expected to continue growing in terms of installed capacity and generation. However, it may need to improve the efficiency of its plants to lower the costs of generation and revive demand for power.

December 5, 2017
Pumped storage hydropower is one of the most developed and reliable energy storage technologies globally. With an [...]
More 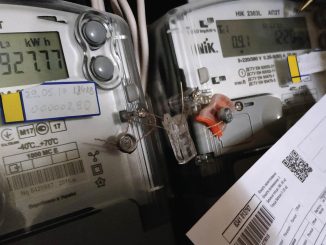 July 10, 2017
Even as New York and London were lighting up in the late nineteenth century, the first display [...]
More