Fly ash management has been one of the key concerns of the power sector in India owing to the high ash content (30-45 per cent) in domestic coal, which accounts for over 70 per cent of the total electricity generation. Fly ash requires large tracts of land for its disposal and, if not managed well, can pose serious environmental hazards.

To address this challenge, a notification was issued in September 1997, to minimise fly ash generation. It mandated for some power plants to use coal with not more than 34 per cent ash content. Since then, the focus has been more on the proper transportation and utilisation of fly ash. The Ministry of Environment, Forest and Climate Change (MoEFCC) has issued various notifications on the utilisation of fly ash from coal-or lignite-based thermal power plants (TPPs). The first notification was issued on September 14, 1999, which has been amended several times (in 2003, 2009, 2015 and 2016). While the regulations have led to a significant improvement in the utilisation of fly ash over the years, it remains far below the target of 100 per cent set to be achieved by December 2017.

As per the 1999 guidelines, every coal/lignite-based TPP was required to achieve full utilisation of fly ash within a period of 9 to 15 years from the publication of the notification. While the utilisation level of fly ash improved from around 12 per cent in 1999 to over 55 per cent in 2009, it remained much below the target levels.

As per the MoEFCC guidelines, it is mandatory for units located within a radius of 300 km from a TPP to mix at least 25 per cent of ash (fly ash, bottom ash or pond ash) with soil for the manufacture of clay bricks, tiles and blocks. It is also mandatory to use only fly ash-based building products (cement, concrete, bricks, blocks and tiles) for the construction of buildings, road or flyover embankments and for the reclamation of low-lying areas. Further, at least 25 per cent of the total material used in the stowing and backfilling of mines (within a radius of 50 km from a TPP) must be fly ash.

According to the latest amendments, it is mandatory to use ash-based bricks and other products for all government schemes involving any kind of construction. These include the Mahatma Gandhi National Rural Employment Guarantee Scheme, the Swachh Bharat Abhiyan, and the Urban and Rural Housing Scheme.  The amendments are also applicable to infrastructure construction such as buildings in designated industrial estates, parks, special economic zones, etc.

The amendment has further directed the Ministry of Agriculture to consider the promotion of ash utilisation in agriculture as a soil conditioner.

The key challenge in the transportation of fly ash is the dust emissions that occur if adequate control measures are not taken. The 2009 notification specified that fly ash should be transported in an environmentally sound manner; however, no directives were issued regarding this. In 2013, the Central Pollution Control Board (CPCB) issued guidelines pertaining to the loading, unloading, storage and transportation of fly ash generated by TPPs.

The guidelines suggest the maximisation of the collection of fly ash and bottom ash in dry form, which is more environment-friendly as compared to wet ash collection. It also mentions that fly ash from different fields of the electrostatic precipitator hoppers should be collected and stored in separate silos at the loading as well as unloading points.

For the loading of fly ash in bulkers/ tankers, the guidelines stated that the telescopic chutes should be closed, the cascade filters and bag filters should be cleaned periodically, and the level sensors in tankers checked regularly. In addition, the guidelines state that a weighbridge should be installed under the fly ash loading chute, the openings of the tankers used for transportation should be closed, polyvinyl chloride-coated mild steel pipes should be used instead of a pneumatic system, and anti-abrasive and anti-corrosive material should be used for the transportation and construction of fly ash storage silos.

On the transportation front, the guidelines suggest different modes for different purposes (cement manufacturing, mine backfilling, road construction, etc.). One of the key suggestions for transporting fly ash is the deployment of tankers/bulkers or mechanically covered trucks. The guidelines also specify that fly ash or bottom ash should in no circumstances be transported in open trucks irrespective of the distance or end-use.

Apart from the CPCB guidelines, the January 2016 notification has issued certain directives for the transportation of fly ash. It states that every coal-or lignite-based TPP has to install dedicated dry ash silos with separate access to roads with the objective of easing the delivery of fly ash. The cost of transportation within a radius of 100 km from a TPP will be borne by the coal-or lignite-based TPP and the cost of transportation beyond 100 km and up to 300 km will be shared equally between the user and the TPP.

In addition, the entire cost of transportation of fly ash (within a radius of 300 km) to any road construction site under the Pradhan Mantri Gram Sadak Yojana and other asset creation programmes of the government involving the construction of buildings, roads, dams and embankments will be borne by the TPP. 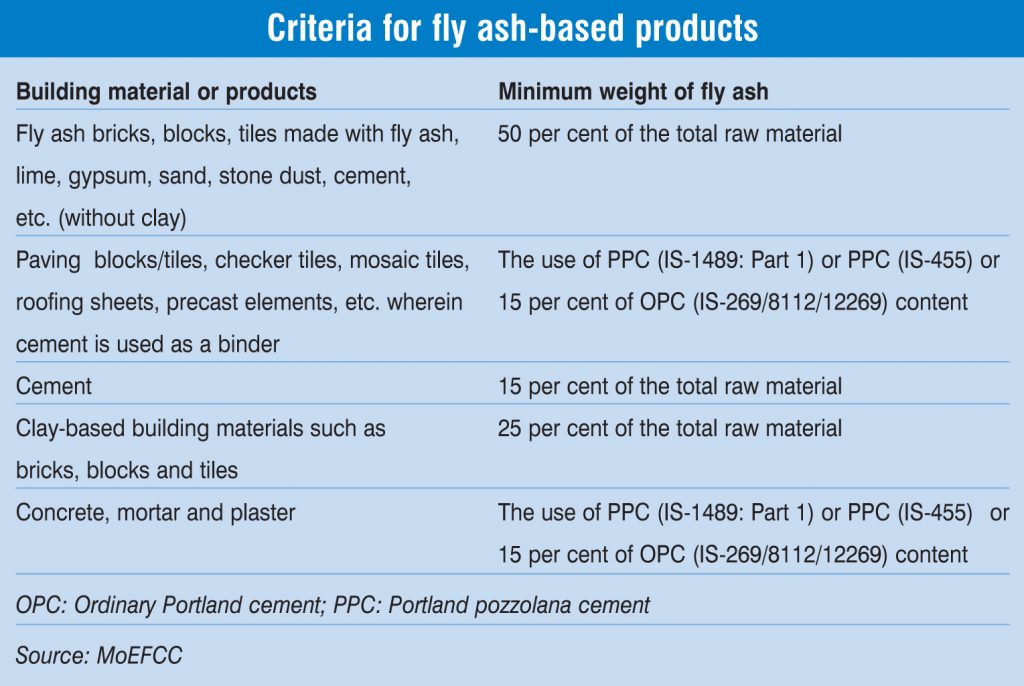 As per the latest amendment, the TPPs will promote, adopt and set up ash-based product manufacturing facilities on their premises or in the vicinity to reduce the distance for the transportation of fly ash. TPPs situated near cities should support the setting up of ash-based manufacturing units to meet the requirements of bricks and other building construction materials, and to reduce transportation costs. Further, according to the amendment, it is compulsory for a TPP to upload the details of fly ash available with it on its website and update the stock position at least once every month.

While the guidelines suggest various measures to ensure effective fly ash management and reduce its negative environmental impact, implementation has not been at the desired level. This is evident from the extension of timelines with every amendment. Given that only 57.93 per cent fly ash utilisation was achieved in the first half of 2016-17 (April to September 2016), it seems difficult for the December 2017 deadline to achieve.

Meanwhile, Maharashtra State Power Generation Company Limited has formulated a fly ash utilisation policy for the state and set up a subsidiary, Mahagenco Ash Management Services Limited, for its ash management business. In order to improve the overall utilisation level of fly ash, it is imperative to undertake such measures on a wider scale and have proper coordination between TPPs and fly ash users. Going ahead, the government should take firm action against defaulters to ensure compliance with the norms.

The renovation and modernisation (R&M) of thermal power plants (TPPs) is undertaken primarily to equip existing units with the latest technologies in order to improve their performance in terms of output, reliability and availability, reduce […]