Water is a key input in thermal power generation. It is used in almost all systems of a power plant including cooling water systems, ash handling, air conditioning and ventilation, and coal dust suppression. The cooling system uses the maximum water, accounting for more than 80 per cent of the total input water requirement of a coal-based plant. In a typical 500 MW coal-fired unit, the amount of water required for condenser and auxiliary cooling is estimated at 60,000 m3 per hour.

While cooling systems consume the highest volume of water, they also have a significant potential for a reduction in water usage through the implementation of more efficient designs. The efficiency of cooling systems also directly affects the performance of the power plant. These systems play the vital role of cooling water for the heat exchange equipment of power plants. As the efficiency of a cooling system declines, the temperature in the system rises. For every degree of temperature increase, the energy consumption in the unit can go up by as much as 2 per cent. Hence, there is a need to deploy efficient cooling systems.

Cooling water systems are of two types – once-through cooling (OTC) systems and closed-cycle cooling systems with cooling towers. OTC systems draw water from oceans, estuaries, lakes or rivers. They not only require a huge volume of water, but also adversely affect the environment. As per the January 1999 notification of the Ministry of Environment, Forest and Climate Change (MoEFCC) regarding amendment to the Environment (Protection) Rules, power plants installed after June 1999 and based on freshwater sources were not permitted to deploy OTC systems. Only power plants in coastal regions using seawater were allowed to use OTC systems.

However, as per the ministry’s December 2015 notification, it is mandatory for all power plants with OTC systems to install cooling tower-based systems. Meanwhile, all existing cooling tower-based plants need to reduce their specific water consumption to 3.5 m3 per MWh. At present, more than 90 per cent of coal-based thermal power plants (TPPs) in India are based on closed-cycle cooling systems.

Cooling towers require up to 95 per cent less water than OTC systems. However, they also reduce the efficiency of the plant with the additional load of fans and higher condensing temperatures.

Cooling towers are being used in most of the power plants across the globe to extract heat from hot water. They can be classified on the basis of the contacting mode into dry, wet and hybrid types.

Wet cooling towers operate on the evaporative cooling principle and rely on the latent heat of water evaporation to cool the equipment. These towers typically contain a wet medium called “fill”, which provides a large surface area for faster evaporation. In this process,  a part of the circulating water is evaporated. Thus, make-up water is required to compensate for the loss of water due to evaporation (necessary to reduce the temperature of the water so it can be recirculated), drift (water lost in the form of droplets allowed to escape from the cooling tower) and blowdown (fraction of the recirculating water removed to manage the mineral content). To ensure water conservation in the cooling system, the cycle of concentration (CoC) of cooling water needs to be increased. CoC is the ratio of dissolved solids in circulating water and make-up water. The increase in CoC decreases the requirement for make-up water. 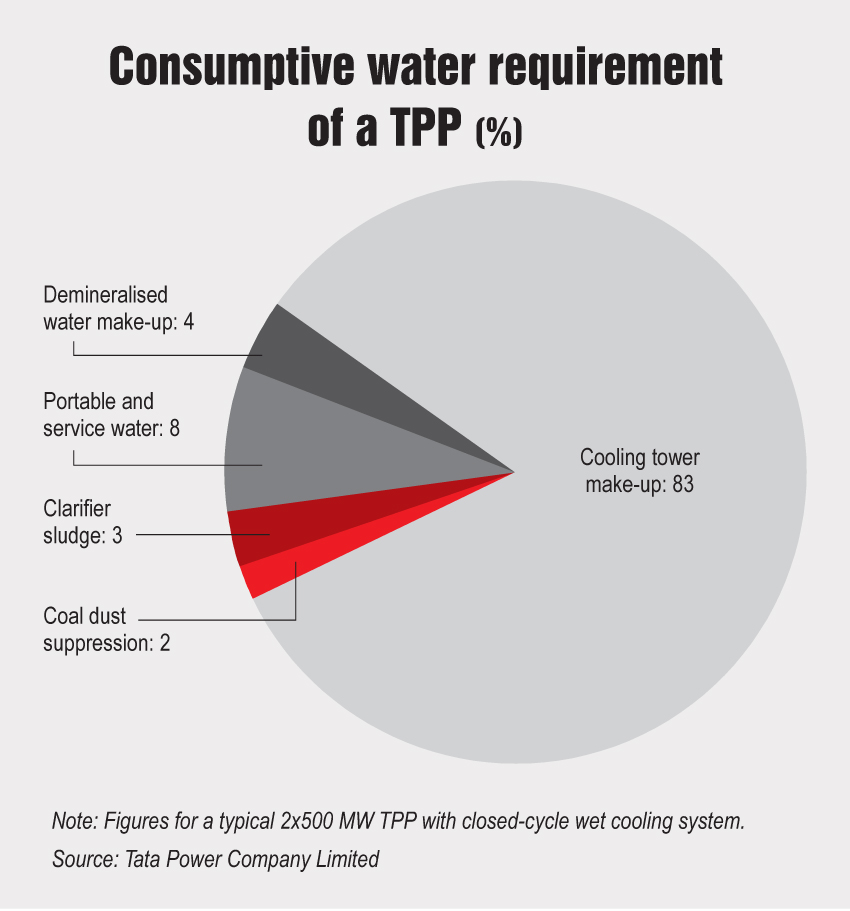 They use air as the cooling medium instead of water and do not require much make-up water. This is because the heat is exchanged from the condenser to the atmosphere by cooling of ambient air in finned tubes and no evaporative cooling is involved. However, air is a less efficient cooling agent and consequently, plant efficiency is reduced by 2 to 7 percentage points compared to a similar capacity power plant with a wet cooling tower , depending on the type of plant. Despite lower efficiency, dry cooling towers are a preferred option in areas with water scarcity as they reduce the pressure on the limited water resources. Meanwhile, a considerable amount of research is being conducted to eliminate the issues pertaining to dry cooling and develop alternative dry cooling technologies.

Direct dry cooling towers can be further classified, on the basis of the driving force of the air stream, into natural-draught or hyperbolic and mechanical-draught-type cooling towers. Natural-draught cooling towers utilise buoyancy in a tall chimney to exchange the heat. The hot water is pumped to a height of about 10 metres to enter the tower and is then sprayed over the trays. The water droplets meet the colder air (entering from the bottom of the tower). Hot water transfers its heat to the air and gets cooled. The cooled water falls down in the form of rain and the warm air rises up in the tower.

Hybrid cooling systems have elements of both dry and wet cooling systems. Such systems use the best features of the two types of cooling. The wet cooling elements are used on the hottest days of the year and the dry cooling elements during the remainder of the year to conserve water. Hybrid systems can save up to 50 per cent more water than wet cooling towers though they may still require a significant amount of water, particularly during summers. In addition, hybrid cooling is more expensive.

The installation of cooling towers in new and existing plants can reduce the water requirement of cooling systems. If all OTC systems are replaced by cooling tower-based systems as per MoEFCC norms, the freshwater consumption of thermal power plants will reduce significantly, by as much as 80 per cent. For this, the government needs to ensure that the norms are adhered to. In addition, the old cooling towers require proper maintenance and some upgrades to improve their efficiency and save water. The replacement of old cooling towers can also be considered to improve plant efficiency.

Balance of plant (BoP) constitutes a critical part of a power plant and accounts for 40-45 per cent of the total project cost. The key subsystems of BoP for thermal power plants typically include coal […]

Water plays a crucial role in ensuring smooth operations of a thermal power plant (TPP). It is typically used at a plant for cooling tower make-up, ash disposal, demineralising (DM) water make-up, etc. In the […]

Fly ash management has been one of the key concerns of the power sector in India owing to the high ash content (30-45 per cent) in domestic coal, which accounts for over 70 per cent […]