Jammu & Kashmir has long been facing a number of political and geographical challenges, which have slowed down its overall development. The state contributes only about 1 per cent to the national GDP. Access to quality and reliable power is one of the key requirements for the development of any region. While the energy needs of the state have increased significantly over the years, the installed capacity has not increased accordingly, making Jammu & Kashmir a net energy importer.

At present, when most states have reached single digit energy and peak deficits, with zero deficit in some states, Jammu & Kashmir is still facing very high deficits. It is also one of the few states that have not yet completed the process of unbundling. Both the central and state governments have taken several initiatives for the development of the power sector in the state. In a joint initiative with the Ministry of Power (MoP), the state government has laid down a 24×7 Power for All roadmap, and it is also a part of the Ujwal Discom Assurance Yojana (UDAY). In November 2015, the prime minister announced a Rs 800 billion special fund, the Prime Minister’s Development Package (PMDP), for Jammu & Kashmir. This includes Rs 117 billion for the augmentation of infrastructure and distribution systems, and development of solar and small-hydro power projects. Power Line takes a look the key trends in Jammu & Kashmir’s power sector… 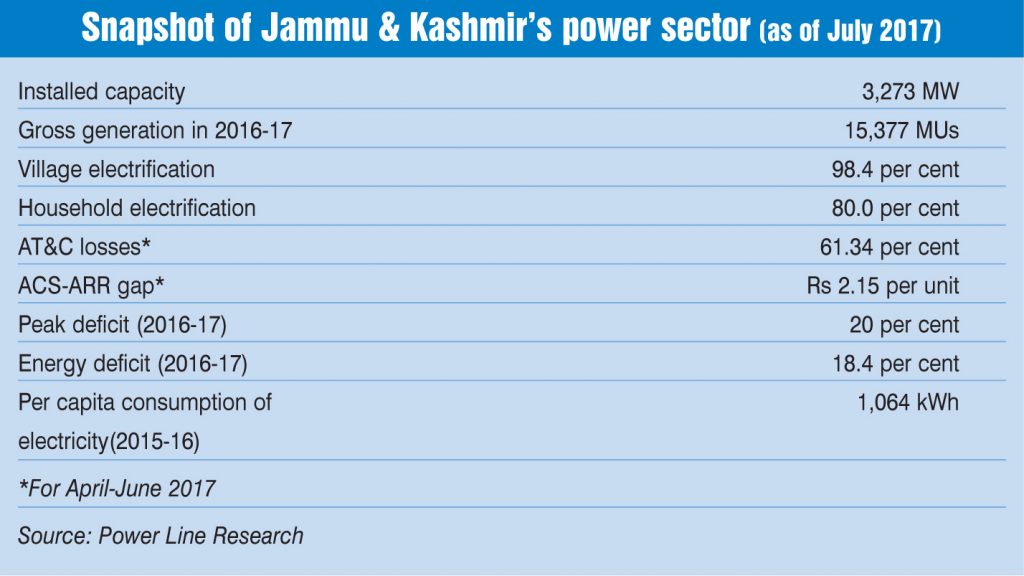 Jammu & Kashmir’s power demand is largely met by central generating stations and the state’s own sources managed by Jammu & Kashmir State Power Development Corporation (JKSPDC). As per the Central Electricity Authority (CEA), the state’s installed power generation capacity stands at 3,273 MW as of July 2017, against a peak demand of 2,600 MW. Of the total installed capacity, almost 70 per cent is based on hydro, 14 per cent on coal and 9 per cent on gas. The share of renewables has increased in recent years and currently stands at about 4 per cent.

Despite having adequate capacity, the state has remained power deficient, mainly due to the high share of hydro in the generation mix and frequent failures in power system. The state faces peak demand during winters when its own generation (dominated by hydropower) reduces drastically. In 2016-17, the state recorded peak and energy deficits of 20 per cent and 18.4 per cent, respectively.

To meet this gap, the Jammu & Kashmir Power Development Department (JKPDD) arranges power from Power Trading Corporation (PTC) and enters into banking arrangements with NTPC Vidyut Vyapar Nigam Limited, and other states including Punjab, Haryana and Chhattisgarh, besides making overdrawals from the northern grid. As part of the banking arrangements, the state banks power in summers and draws it in winters. The department increased the banking of power from 180.69 MUs in 2014-15 to 621.87 MUs in 2015-16. In addition, the state also receives power from the unallocated quota of central generating stations to meet its peak requirement.

The state has an immense hydropower potential of 20,000 MW. Of this, about 16,500 MW (11,283 MW in Chenab basin, 3,084 MW in Jhelum basin 500 MW in Ravi Basin and 1,608 MW in Indus basin) has been identified while only 3,200 MW has been exploited so far. Around 2,009 MW of hydropower capacity in the state has been developed by NHPC, which provides 12 per cent of its total power generation to the state (approximately 1,200 MUs) for free. To facilitate time-bound implementation of hydropower projects in an environmentally sustainable manner, the state has formulated the draft Hydroelectric Projects Development Policy, 2017. 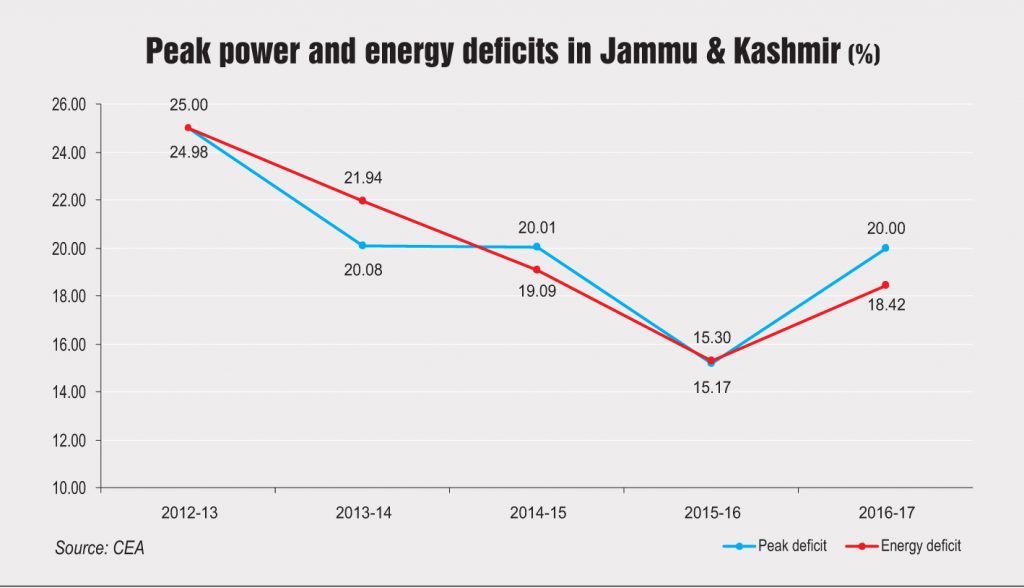 The state has significant renewable energy potential mainly solar and small hydro. The Jammu & Kashmir Energy Development Agency (JAKEDA), set up in 1989, is the state nodal agency for the promotion and development of renewable energy projects in the state. While the state has a small renewable energy base at present, it aims to install about 1,100 MW of solar capacity by 2022. Of this, the Ministry of New and Renewable Energy has sanctioned about 200 MW of solar capacity under the viability gap funding scheme. JAKEDA has finalised the rooftop solar policy, and a few pilot projects with an aggregate capacity of 203 kWp have also been rolled out. In addition, a 100 MW solar park is planned to be set up at Mohargarh. The land has already been identified and is under acquisition while the detailed project report (DPR) is being prepared. 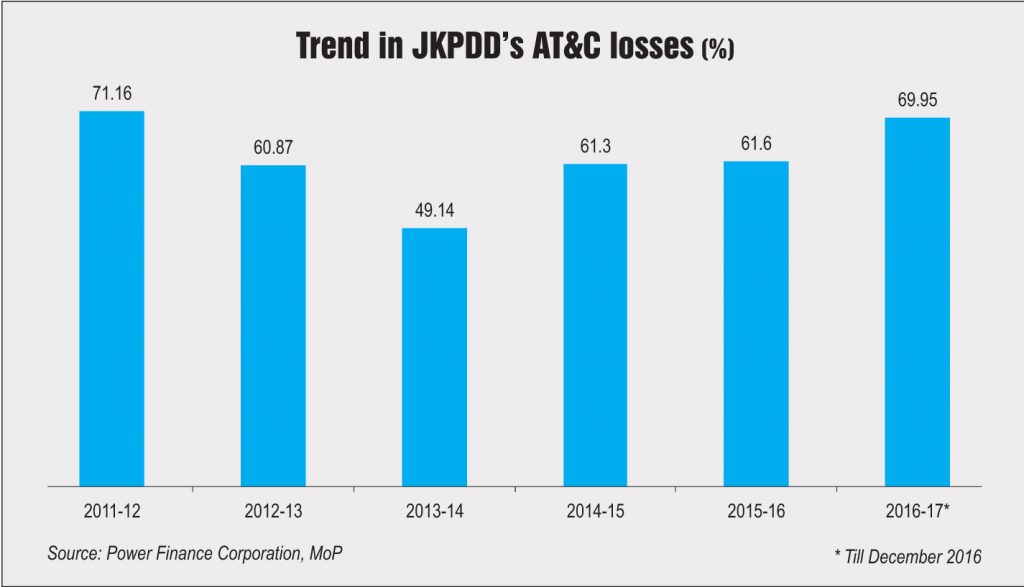 The transmission and distribution (T&D) business in the state is managed by JKPDD. Although the state government had ordered the unbundling of JKPDD and setting up of one transmission company, two distribution companies (one each for Jammu & Kashmir divisions) and one power trading company, in September 2012, the arrangement has not been operationalised. The JKPDD operates and maintains the intra-state transmission network with a transformation capacity of over 4,000 MVA at the 220/132 kV level and 4,500 MVA at the 132/66 or 132/33 kV level along with transmission lines of 1,220 ckt. km at 220 kV and 2,100 ckt. km at 132 kV. Going ahead, JKPDD has proposed a capacity addition of 6,105 MVA and 2,293 ckt. km of transmission lines in the intra-state transmission systems by 2019 (as per the Power for All roadmap).

On the distribution front, the state is a part of all the major schemes of the government. A debt of Rs 35.38 billion has been restructured under UDAY, and the resultant annual savings are estimated at Rs 12.60 billion. In addition, the average cost of supply-average revenue realised (ACS-ARR) gap has reduced from Rs 2.55 per unit pre UDAY to the current Rs 2.15 per unit. However, the improvement in terms of operational performance has not been significant, except at the metering end.

Under the Integrated Power Development Scheme, 85 towns are being covered for system strengthening (sanctioned amount is Rs 4.5 billion) and over 50 towns for IT implementation (Rs 2.07 billion). Under the Deendayal Upadhyaya Gram Jyoti Yojana, around Rs 12 billion has been sanctioned to the state, of which around Rs 4 billion has been released.

To promote energy efficiency, the Unnat Jyoti by Affordable LEDs for All programme is being implemented across the state. Under the scheme, five 9 watt LED bulbs each are being provided to 1.7 million registered domestic consumers at a subsidised cost of Rs 20 each. So far, 7.7 million LED bulbs have been distributed reducing the peak demand by 200 MW and resulting in energy savings of over 1,000 MUs. The government is planning to participate in the scheme for LED tubelights and energy-efficient fans in 2017-18. Further, Energy Efficiency Services Limited has initiated the energy audit of government offices and implementation of energy-efficient LED lighting in government buildings across the state. All the government buildings are expected to be covered in the next two years.

The major challenges facing the state’s power sector are high aggregate technical and commercial (AT&C) losses at 61.34 per cent and a large ACS-ARR gap of Rs 2.15 per unit. In 2015-16, the revenue realised was only Rs 1.48 billion against the expenditure of Rs 61 billion on power purchase. The revenue realised has consistently been much lower than the targeted revenue. This is because a huge quantum of power is lost at the T&D stage. Further, the state needs to boost its generation capacity in order to reduce its expensive power purchase from other sources. In addition, there is a need to develop skills and knowledge of utility professionals to enable them to drive the power sector transformation in the state. This includes expertise in power trading, which has emerged as an important area for power sector development.

The challenges notwithstanding, with network strengthening and loss reduction initiatives under various government schemes, planned capacity additions and proactive policy measures, the power sector in the state is likely to witness all-round growth in the near future.

The Himalayan state of Sikkim witnessed the commissioning of the 1,200 MW Teesta Stage III (Teesta III) project, the state’s largest hydropower project, in the beginning of 2017. Located on the river Teesta, the project […]

The state of Jammu & Kashmir is striving to meet the growing power demand, and address legacy issues such as high peak deficit and lack of electricity access to unconnected households. A number of projects […]