The Indian power sector, being one of the prime sources of emissions, is currently going through a major transformation to ensure reduction in emissions. The reform measures introduced by the government in the form of new environmental norms are at par with the best in the world. The environment reforms along with finalisation of new norms of efficiencies, encouraging wind and solar power and focusing on e-mobility solutions are expected to have a socio-economic impact and change the industry dynamics.

While these are noteworthy efforts, the per capita consumption of electricity in the country is still much less than the world average. While India has rightly increased its efforts to reduce emissions, there is also a need to increase its efforts to provide power for all. It has to be done through both benign renewable production of electricity and thermal power while reducing emissions, leading to the creation of a cleaner environment. A reduction in emissions certainly has its own challenges in terms of cost, logistics, land, technology, marketing of by-products, water and competitiveness.

With India’s commitment to climate change mitigation and expected growth from renewable energy sources in the next decade, the energy mix is likely to alter significantly. This would also impact the cost of electricity. Affordability of power is a key driver of demand, which, in turn, influences the GDP of the country.

While the new environmental norms are intended to deal with emission reduction from existing and future thermal plants (a demand-side measure), there is a need to address the supply side of coal too). Indian coal has a significantly high ash, sulphur and nitrogen content, and thus requires focus on coal beneficiation. Like the revised emission norms for thermal plants, there is a need to also introduce coal supply quality norms, especially for the ash percentage, along with specific timelines for implementation.

The implementation of the revised environmental norms is expected to have a bearing on the cost of power generation as well. Hence, it is necessary to ensure that the cost of pollution-mitigating measures is also optimised in the best possible manner. As per initial estimates, the capital expenditure to implement new norms would be between Rs 7 million and Rs 10 million per MW.  The operations and maintenance costs of emission control equipment would further increase power costs, thereby increasing the cost of electricity by 40-50 paise per kWh.

Cost optimisation requires scanning and arriving at the technology most suited to each unique site, for example, limestone, gypsum logistics, sulphuric acid possibility and sulphate; a policy to have Indian content to the extent of 60 per cent-70 per cent in value; standardisation of specifications of different technologies by the Central Electricity Authority (CEA); availability of loans at lower rates or viability gap funding (part of the coal cess to be used) through a central agency based on competitive bids; and sizing of flue gas desulphurisation (FGD) most appropriately. The major hurdle in financing these new stringent norms can be overcome through allocation of the collections from the coal cess (Rs 400 per tonne) under the National Clean Energy and Environment Fund (NCEEF).

If the environmental norms are to be implemented in plants with the life of units less than 10 years, it is expected that the cost of mitigation may increase by an additional 20 paise per unit. The additional cost increase could be mitigated by extending the power purchase agreements (PPA) of such units by an additional five to seven years, provided it does not exceed 30 years of life. Units over 25 years could be allowed a time of five years to continue, with a choice for the developer to replace these units by more efficient ones. In the case of must-run units, renovation and modernisation could be done for these units, with an extension of PPAs for 10 years, thus facilitating meeting the environmental norms. Stranded assets could be allowed to compete as per the bidding guidelines, with the ceiling limit of normative fixed costs allowed to be incurred on environmental measures as an additional fixed cost.

Analysts suggest that the market needs to get ready to execute projects nationally at such a large scale in the short time frame available to implement norms. Another set of challenges that the industry faces is that of outage timings and management of the grid, which is being tackled by the regional power committees and the CEA. The challenges of sourcing raw material such as limestone and ammonia and the disposal of by-products including competitive suppliers are yet to be discussed. 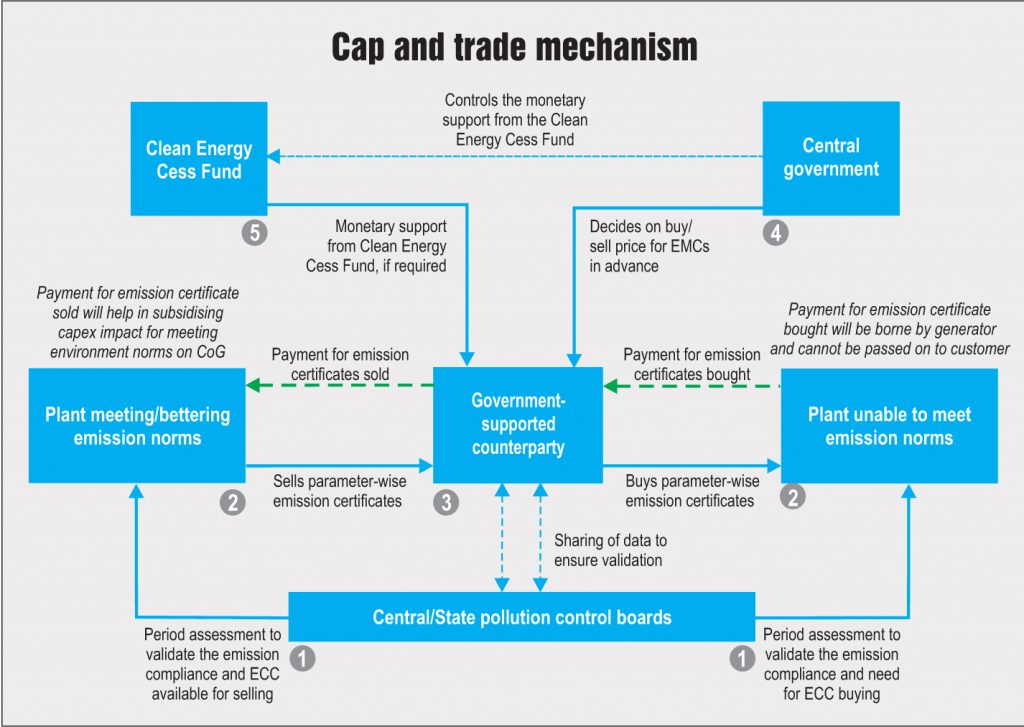 For dealing with errant generators, the following two steps could be followed. In the first step, the government could introduce a cap and trade mechanism under which plants could trade instruments for shortfall or surplus in volume emissions for different pollutants. Under the cap and trade mechanism, all units could be asked to either convert within a defined period or asked to adhere to a Perform Achieve and Trade-like regime for emissions improvements. Compliance could be assessed by the central/state pollution control boards and non-compliance should mandate significant penalty. The non-complying capacity could be phased out after the mandated timelines, except for force majeure reasons. This would also give an opportunity to replace low efficiency supercritical plants or to replace capacities with other forms of electricity generation. The cap and trade mechanism will ensure that low-cost ageing plants meet the environmental norms or get enough time to decide on continuity or replacement with high efficiency plants. The pricing in the trading should be regulated by a government agency. However, the market may not be self-sustainable and may need financial support from the government from time to time, from the Clean Environment Fund.

There is merit in formulating a comprehensive implementation strategy to meet new environmental norms. While the first steps to announce new norms and involve the CEA have already been taken, there is a need to consider various scenarios regarding plant life, technology, space constraints, economic condition of the plant, efficiency, cost, timelines, level playing field, etc., and create a comprehensive implementation policy document. The challenges and recommendations need to be understood jointly by all the stakeholders to implement these norms successfully. During the growth trajectory, we cannot afford to go wrong when we have made commitments to the citizens of the country with the Make in India, Power for All and employment for youth initiatives.