A conducive policy framework has helped the transmission sector to develop consistently at a significant growth rate. The growth is likely to continue over the next few years. “The power transmission segment is currently the most attractive infrastructure investment in India,” as per the Crisil’s Infrastructure Investability Index. The key drivers will be increasing demand for power, addition of generation capacity including renewables, and new technology adoption for grid modernisation, as well as the need to reduce congestion and enable free flow of power across regions. At the intra-state level, the key focus is on upgradation and modernisation of existing networks to cater to the increasing demand since not much new network can be added owing to right-of-way (RoW) issues.

As per Central Electricity Authority’s (CEA) draft National Electricity Plan (NEP), 2016: Volume II – Transmission, a line length addition of 105,580 circuit kilometre (ckt. km) and substation capacity addition of 292,000 MVA have been envisaged during the Thirteenth Plan period (2017-22), entailing an investment of Rs 2.6 trillion. In 2016-17, 26,300 ckt. km of lines and over 77,000 MVA of transformer capacity were added, indicating that the implementation of the targeted capacity addition is on track.

Corresponding to the addition of lines, a major part of the investment will be on the erection of towers. On an average, towers account for more than 35 per cent of the cost involved in the construction of a transmission line. Along with their foundations, the towers constitute almost half the cost of a transmission line. Therefore, market opportunities for technology providers and transmission tower players are likely to grow significantly in the coming years. Power Line takes a look at the key demand drivers and investment plans of utilities in the transmission segment for the next few years… 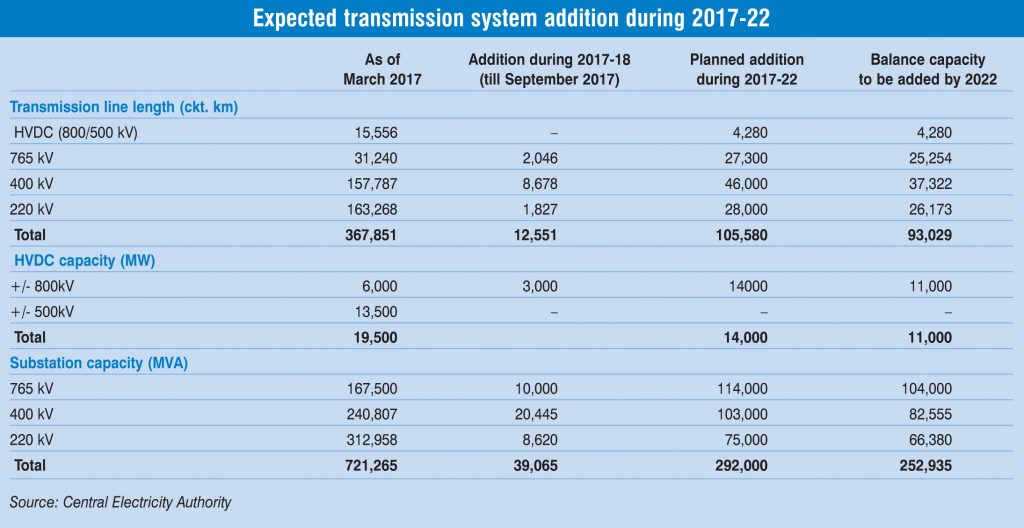 Typically, the need for development of the transmission system arises from the addition of new generation capacities, increase in demand and system strengthening for better reliability. Apart from these, the key drivers of the growth in the transmission network are integration of renewable energy, shift towards higher voltage systems and upgradation of the existing infrastructure.

As per the draft NEP, the peak power demand in the country is expected to be 235-245 GW vis-à-vis the 164 GW at present. In order to meet this increasing demand and installed generation capacity, the expansion of transmission and distribution networks is vital. Further, given the government’s impetus to expanding renewable energy, the share of renewable energy in the total installed capacity base is expected to almost double from the 17 per cent at present. This will necessitate transmission expansion, network augmentation and grid strengthening to deal with the variability of such high proportion of renewables in the system.

Another key focus area has been to provide 24×7 affordable and quality power to all by 2019. With this objective, all states have prepared roadmaps for the augmentation of transmission and distribution infrastructure. Expansion and strengthening of the transmission network is also crucial for reducing congestion to enable free flow of power from surplus to deficit regions, as well as aid further development of the short-term power market. With various technologies coming in, there is a thrust on grid modernisation, which would help improve the performance of the utilities.

Power Grid Corporation of India Limited (Powergrid) owns and operates more than 90 per cent of the country’s interstate transmission system network, and has plans to invest around Rs 1,000 billion by 2022. In 2016-17, it invested around Rs 250 billion, the highest ever capex in a single year. The company has approximately Rs 1,240 billion of works in hand, including Rs 1,020 billion of ongoing projects and Rs 220 billion planned for new and tariff-based competitive bidding projects. It is likely to complete various transmission lines and substation projects in the next few years. The company has a capex plan of around Rs 810 billion over the next three years, including Rs 250 billion to be invested in 2017-18.

The utility’s capex plans have increased thrust on intra-state and railway works, along with focus on the development of interregional transmission capacity and the facilitation of interconnections with neighbouring countries. The interregional transmission capacity will go up to 20,000 MW between the western and northern regions from the current 10,600 MW, and to 18,400 MW between the NEW grid and southern region from the current 7,450 MW. The company also has a number of interconnections with neighbouring countries under implementation. These are the  Punatsangchu-I HEP (Bhutan)–Alipurduar (India) and Jigmeling–Alipurduar 400kV D/c (Quad) lines between India and Bhutan and the Baharampur (India)–Bheramara (Bangladesh) 400kV line between India and Bangladesh.

The central transco is also in the process of developing the 800 kV Raigarh-Pugalur high voltage direct current (HVDC) project, besides a number of 765 kV lines to be developed in the next three to four years. It is also implementing green energy corridors for facilitating the integration of large-scale renewables into the grid.

Based on the investment plans of state transmission companies (across 31 states and two UTs), a total of about Rs 1,744 billion has been planned to be invested in the intra-state transmission infrastructure till 2018-19. Of these, Tamil Nadu is expected to witness the highest investment at about Rs 203.09 billion, followed by Telangana (Rs 178.03), Uttar Pradesh (Rs 142.43 billion), Bihar (Rs 123.14 billion), Andhra Pradesh (Rs 105.20 billion) and Gujarat (Rs 130.03 billion), by 2018-19. These five states account for almost 50 per cent of the total planned investment in the intra-state network.

The transmission grid has expanded at a fast pace in the past few years. Despite significant growth, the transmission segment continues to be plagued by certain issues and challenges such as RoW, transmission congestion, inadequate investment in the sub-transmission networks and limited number of TBCB projects in the pipeline. Notwithstanding these issues, the utilities’ investment plans for the next few years indicate significant network additions, and hence, more opportunities for transmission tower market players.

Jammu & Kashmir is highly dependent on local hydropower projects for meeting its energy needs as its transmission connectivity to the rest of the country is limited. At present, a single transmission line (Wagoora-Kishenpur-Pampore-Udhampur) connects […]

HV and EHV applications In order to connect new generation sources to load centres as well as meet the need for reliable power supply, it is crucial that proper power evacuation infrastructure is in place. […]