In recent years, there has been considerable debate on whether coal can continue to play an essential role in the global energy mix. Coal is the most widely available fossil fuel resource. It forms the backbone of the world’s electricity supply, meeting more than 40 per cent of the global electricity needs. However, cheap and fast-growing renewables are now taking centre stage as economies pursue low-carbon growth strategies. Renewables are changing the way traditional sources of power operate to bring flexibility in generation.

Even though coal is being displaced by renewables, its share in the energy mix is expected to decrease only to 30 per cent over the next decade as per global equipment major GE Power. Fossil fuel will continue to account for 60 per cent of the global power generation and will be critical for providing baseload power.

Shifting towards more modern coal-fired plants based on ultra supercritical technologies that prioritise efficiency, emission reduction and improved cycling and response can ensure that coal has a meaningful role to play in the future energy mix. 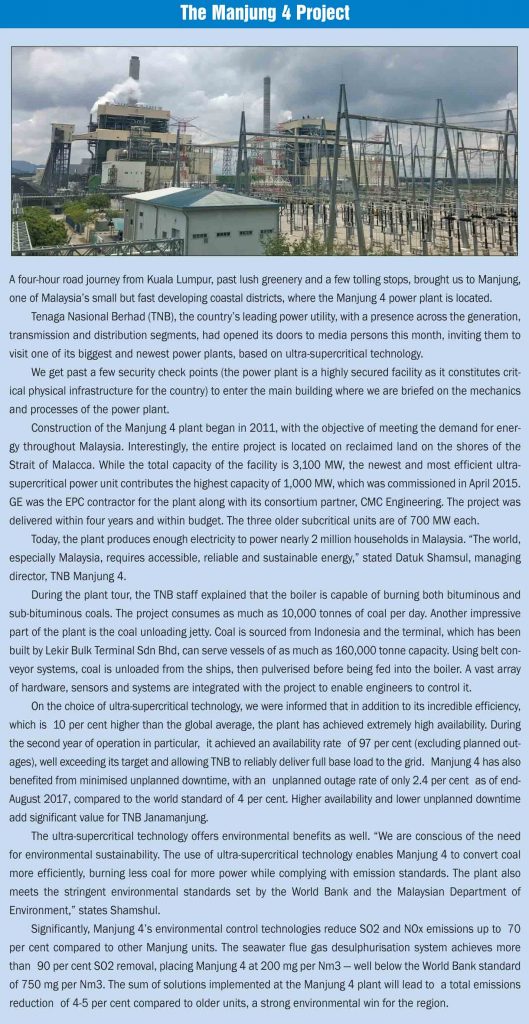 According to estimates, around 25-30 GW of ultra-supercritical plants are currently in the pipeline globally. These plants offer advantages such as higher average efficiency of 40 per cent, lower environmental emissions, lower coal consumption and hence, fewer emissions per kWh of output (almost 158,000 tonnes per annum of CO2 emission reduction).

Much of these new investments are being made in attractive emerging markets. For instance, Turkey is adding high-efficiency coal (and nuclear power plants) to meet its growing energy demand. Dubai is also in the process of developing its first ultra-supercritical plant aggregating 2,400 MW, which is expected to be completed in 2023.

According to the International Energy Agency’s Southeast Asia Energy Outlook 2017, the energy demand in the 10 ASEAN countries has grown by almost 60 per cent over the past 15 years. An estimated 65 million people, of the total population of 640 million, are without electricity. While oil holds the largest share in the region’s energy mix at present, coal is projected to be the largest generation source (accounting for almost 40 per cent) by 2040.

Malaysia is heavily investing in coal-based power and is home to Southeast Asia’s largest ultra-supercritical power plant, the 1,000 MW Manjung 4 plant. The project plays a key role in meeting the country’s power demand, which is projected to almost double between 2015 and 2040. A Power Line team recently visited the plant, which is owned and operated by TNB Janamanjung, a subsidiary of state-owned TNB. Built using ultra-supercritical technology, the project is one of the newest, most efficient plants in the region. During its operation, Manjung 4 exceeded its original performance commitments with high flexibility and availability (see Box).

Commenting on the cost economics of this technology, Andrew DeLeone, managing director, GE Power India Limited, notes, “Ultra-supercritical plants have better economics than subcritical. The benefits always outweigh the costs. Instead of higher efficiency and higher costs, it should be thought of as higher efficiency and less costs.”

While new plants are expected to be cleaner with ultrasupercritical technologies, multiple efforts are being made to make the existing plants cleaner as well. For instance, the government is already shutting down and retiring old and inefficient coal-based plants. Almost 22 GW of projects are planned to be retired as per the CEA.

However, this wouldn’t be enough. “The plants to be retired constitute a small proportion of the total installed base of nearly 197 GW of coal-based power. The real challenge lies in making India’s large installed coal fleet cleaner. Most of the fleet that generates power today in India is subcritical. That’s what we need to improve. There are about 175 GW of subcritical plants today.” says DeLeone.

Meanwhile, the government introduced stringent environmental standards for SOX and NOX control in December 2015. The existing plants were given two years, that is, up to December 2017, to comply with these revised standards, and plants commissioned after January 1, 2017, are required to ensure compliance from the commencement of operations. “Even though the implementation is moving slowly, it will happen,” comments DeLeonne. He does, however, add that all the emission control equipment being installed in India has nothing to do with CO2 reduction and the only way to do this is to make existing plants more efficient. “With new technologies for efficiency enhancement, as much as 15 per cent increase in turbine efficiency and an overall improvement in plant efficiency by 5-10 points can be made possible in case of sub-critical plants,” explains DeLeonne. Also, more efficient plants need to be prioritised. “India should run its clean plants more, and run the dirtier, low-efficient plants less.” DeLeone adds.

Even when coal-based capacity additions have slowed down with the project pipeline drying up, the advocates of clean coal technology believe that coal-based power is here to stay.

“It is an exciting time for coal-based power. Most people are writing off thermal power. However, the reality is that the wind does not always blow and the sun does not always shine. Coal plants have a long life and with their flexible and balancing power capabilities, it can be a key enabler for renewable energy sources,” DeLeone concludes.