The gas-based power sector has been under the weather. Of the 25 GW of installed gas-based capacity, over 14 GW is stranded due to the non-availability of domestic natural gas and unaffordable imported gas. As a result, a large amount of assets in this sector have been rendered non-performing. Gas-based power plants have been facing a deficit gas supply since 2011-12 leading to a suboptimal plant load factor (PLF) of about 24 per cent (2017-18).

The normative gas requirement to operate gas-based power plants at 85 per cent PLF is about 102 million metric standard cubic metres per day (mmscmd) , but the average domestic gas supplied during 2017-18 was only 25.71 mmscmd. Further, due to the high cost of imported regasified liquefied natural gas (RLNG), the cost of RLNG-based generation is substantially higher than domestic gas-based generation. This has made it difficult to schedule such power in merit order despatch, especially in view of declining renewable energy tariffs.

In January 2019, the Standing Committee on Energy (SCE) presented its report, “Stressed/Non-performing Assets in Gas-based Power Plants”. The report strongly states that the oil and gas ministry as well as banks and lenders are responsible for the current crisis in the gas-based power sector – the ministry for superfluous projections regarding gas production from the Krishna Godavari basin (KG-D6) block and banks for the unrealistic lending of public money. Power Line presents the key highlights from the report…

The large-scale introduction of renewables, in view of the 175 GW renewable energy target, has increased the need to balance the electric grid. Gas-based plants, with their rapid ramp-up rates and quick start-up time, can play a vital role in grid balancing. They also provide benefits such as lower carbon dioxide emissions, zero particulate emissions, and less resource requirement in terms of land and water.

It must be noted that investments of Rs 40 million-Rs 50 million per MW were made to set up stranded gas-based projects. This amounts to an investment of Rs 650 billion for 14,305 MW of stranded capacity. Of this, about Rs 500 billion (70-80 per cent) was funded by banks. The committee remarked that this capacity has been built using a significant amount of public money, and it cannot be allowed to remain stranded. Also, even if bankruptcy proceedings are initiated for these projects, they are unlikely to find buyers till the status of gas availability improves.

Recommendations of the SCE

The committee noted that gas-based power plants were planned based on the assumption that there will be a significant increase in domestic gas production, particularly from the KG-D6 field. But the projections turned out to be grossly inaccurate as the production from the KG-D6 block reduced to zero, and there has been no supply for the power sector since March 2013. Since these gas-based power plants were set up with assurance from the government regarding gas supply, it is the government’s responsibility to revive the stranded gas-based plants.

The committee also emphasised the continuation of priority allocation of gas for the power sector in response to the Ministry of Petroleum and Natural Gas’s (MoPNG) proposal to remove it from the priority sector list. Being a regulated sector, the power sector needs domestic gas allocation more than any other sector.

The committee noted that apart from the basic cost, value added tax (up to 26 per cent), entry tax, etc. are levied on domestic natural gas and RLNG, increasing their cost vis-à-vis other fuels. Meanwhile, a goods and services tax (GST) of only 5 per cent has been levied on coal. Natural gas being a cleaner fuel should be brought under GST to reduce its cost for consumers.

The production of domestic gas is expected to pick up in the near future, and there is a need to hand-hold these stranded gas-based power plants only for the next two to three years. The MoPNG has stated that the production of domestic gas is expected to go up to 60.5 billion cubic metres by 2021-22. The committee, therefore, recommended the government to come up with a scheme like the e-bid RLNG scheme (launched in 2015) to support these stranded plants till supply improves. The financial support/subsidies required for the scheme may be sourced from the Power System Development Fund, the National Clean Energy Fund and budgetary grants. The power produced under the scheme may be used for bundling with other low-cost power, as has been done by NTPC earlier. Besides, RLNG may be pooled with domestic gas through an aggregator like GAIL (India) Limited to achieve a rational price.

The SCE’s recommendations provide a way forward for the ailing gas-based power sector in the country. With the government and lenders ready to write off investments in the sector, the SCE’s recommendations are much needed to salvage the sector. At a time when the world is focusing on clean power generation, the revival of gas-based power capacity can help the country meet its commitments. 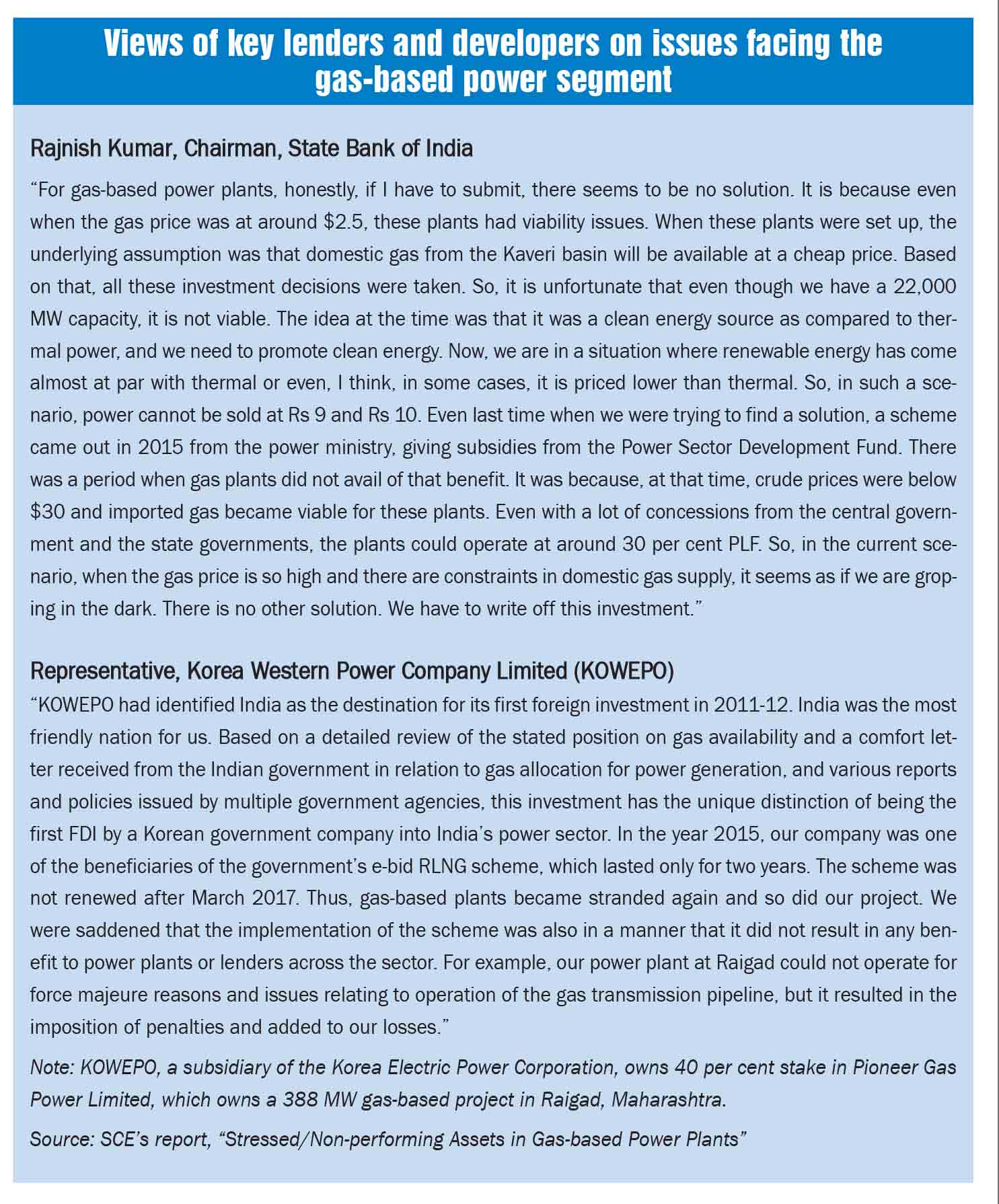