The large untapped hydro potential of some of the neighbouring countries of India, supplemented by their low electricity demand has led to the development of cross-border hydropower capacity for trading surplus power. Nepal and Bhutan have been at the forefront of these bilateral agreements. India, too, has signed strategic agreements to buy power from its hydro-rich neighbours. Power Line takes a look at the operational and upcoming cross-border hydroelectric projects (HEPs) in Bhutan and Nepal…

Currently, three HEPs with 1,416 MW of capacity and a total energy supply of 6,161 MUs are operational in Bhutan under the Indo-Bhutan energy cooperation agreements with a 60 per cent grant component. These are the 336 MW Chukha HEP with a design generation capacity of 1,800 MUs, the 60 MW Kurichu HEP with 399 MUs and the 1,020 MW Tala HEP with 3,962 MUs of generation capacity.

Three other projects are in the pipeline. The DPR for the 540 MW Amochu Reservoir HEP by NTPC has been prepared and cleared by the CEA. The design generation capacity of the project is around 1,862 MUs. The project will be built at an estimated cost of Rs 37.38 billion. The other two projects are the 1,125 MW Kuri-I HEP and the 2,640 MW Kuri Gongri HEP. For the former, DPR has already been prepared while for the latter it is under preparation.

Currently, Nepal exports electricity only to India. The scenario may reverse once the projects under discussion are commissioned. So far, HEPs aggregating 51 MW have been set up in Nepal under the Indo-Nepal energy cooperation agreements. These are small HEPs below 25 MW of capacity namely, the 21 MW Trisuli HEP, the 15 MW Western Gandak HEP, the 14 MW Devighat HEP and the 1 MW Pokhra HEP.

Two HEPs, the Pancheshwar/Rupaligad HEP and the Sapta Kosi high dam and Sunkosi diversion-cum-storage HEP with a total capacity of over 9,000 MW, are under discussion. For the 5,040 MW Pancheshwar/Rupaligad HEP, a draft DPR was prepared by WAPCOS Limited in November 2016. The project with a total installed capacity of 4,800 MW involves the construction of a dam with live storage and two underground powerhouses, one on each bank of the Pancheshwar River. It also includes the construction of a dam with live storage and two underground power stations, one on each bank of the river at Rupaligad, with an installed capacity of 240 MW. The project entails a total cost of around Rs 421.84 billion and is expected to generate over 9,000 GWh of power during a 90 per cent dependable year. The 3,300 MW Sapta Kosi High Dam Multipurpose Project is expected to generate 15,730 MUs of electricity. However, the law and order situation in Nepal has hindered its development. Issues relating to the existing and future use of water by India, benefits and cost apportionment, etc. are being discussed between the two countries. Besides these projects, the Nepal government has awarded a contract to SJVN Limited for setting up the 900 MW Arun-III HEP on a build-own-operate-transfer (BOOT) basis for a period of 30 years. As per the MoU, SJVN will provide 21.9 per cent of the power from the run-of-the-river project to Nepal without any charge and pay 7.5 per cent of the total income as royalty to the Nepal government. The project is scheduled to be commissioned in 2022-23.

Another key trend is the growing participation of Indian private companies in Nepal’s hydropower segment. GMR Energy is implementing the 900 MW Upper Karnali HEP, a run-of-the-river project, in the western part of Nepal on a BOOT basis. GMR Energy will provide 12 per cent of power to Nepal free of cost and pay 27 per cent free equity to the Nepal government. The project with an estimated cost of $1,412 million is expected to generate 3,466 MUs of power annually. It is scheduled to be commissioned in 2023-24. Further, a consortium of the GMR Group and Italian-Thai Development PLC is developing the 600 MW Upper Marsyangdi HEP in Nepal. Located in Lamjung and Manang districts, the project is being developed by Himtal Hydropower Company Private Limited, the Nepalese subsidiary of GMR Energy Limited. The project development agreement (PDA) is yet to be signed.

The Nepalese government has signed an MoU with Tata Power Company Limited and Norway-based SN Power for developing the 650 MW Tamakoshi-3 in Janakpur Zone. The project is expected to have an annual power generation of 2,340 MUs. For this project, too, the PDA has not yet been signed. 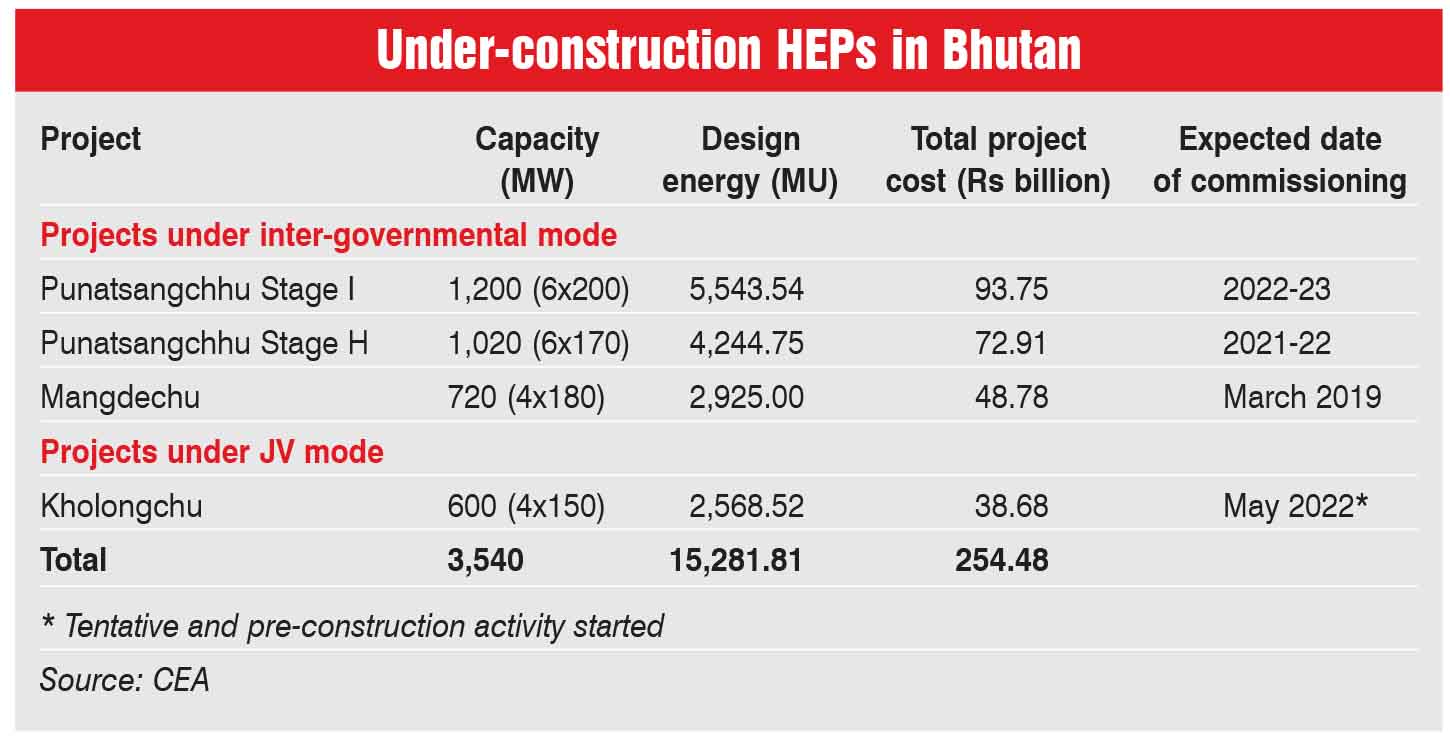 One of the noteworthy steps taken to facilitate cross-border electricity trade in India was the issuance of guidelines by the Ministry of Power in December 2016. The guidelines were repealed in December 2018. While the 2016 guidelines lent significant clarity to the existing regulatory and policy framework, they fell short of industry expectations as spot trading, the primary product of the power exchanges, was excluded from cross-border trading. The key positive of the 2018 amended guidelines is the approval for trading in the day-ahead market (DAM). According to experts, the advantages of trading in DAM on the power exchanges, including competitive prices, flexibility in procurement, reliability, efficiency and counter-party risk management, have been extended to the neighbouring countries.

Further, the new guidelines have relaxed a number of norms. This is expected to boost investor confidence and promote wider market participation in this space. As per the earlier guidelines, India could trade electricity with its neighbouring countries under bilateral agreements while the new guidelines have allowed tripartite agreements as well. The MoP has also included a provision under which two countries that have signed bilateral agreements with the Indian government can trade electricity with each other through Indian transmission lines after entering into an agreement with the central transmission utility of India.

The MoP has also repealed an earlier provision, according to which only those companies that were fully owned by the government or those that had at least 51 per cent stake in Indian companies could export power to the Indian market after obtaining one-time approval from the designated national authority. According to the revised guidelines, approval from the designated authority will not be necessary, except in certain cases involving intergovernmental agreements. 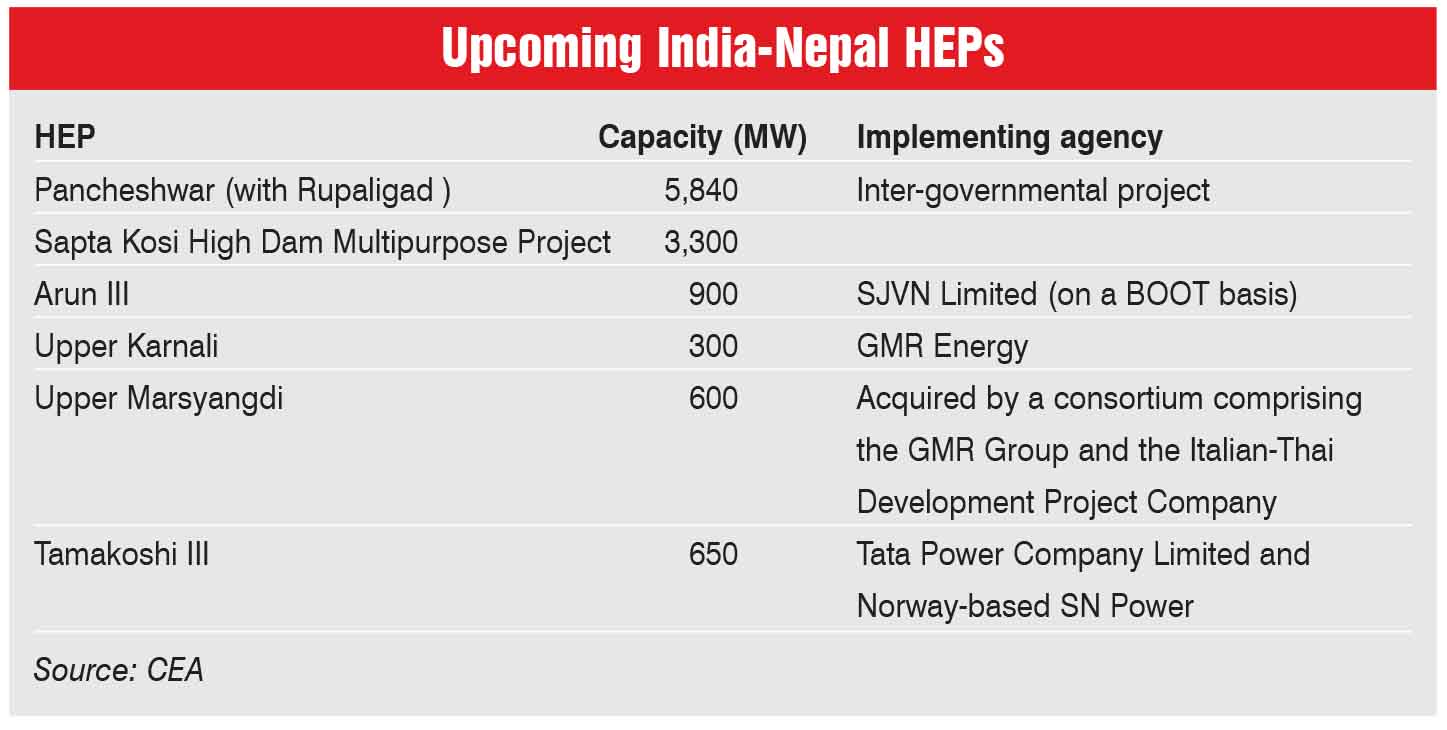 The development of the hydropower potential in Nepal and Bhutan can significantly alter the energy dynamics in South Asia. As hydropower gains traction, bilateral ties with these countries will improve India’s energy scenario.

Bhutan is a close partner of India. The grants and loans provided by India to develop Bhutan’s hydropower sector are crucial to the latter’s economy. Bhutan cannot harness its hydropower potential on its own due to the lack of finances and technology. It depends on India for both. A number of Indian hydropower companies operate in Bhutan. In recent years, with changes in India’s policy on the development of hydropower projects in the neighbouring countries, the grant amount to Bhutan has decreased.

Nepal on the other hand  experiences heavy during June-September, which brings risks as well as opportunities for hydropower development. A number of initiatives are being taken by the Indian government to resolve the issues facing cross-border transmission and trading of electricity, and facilitate the development of cross-border HEPs.