It was a month of hectic policy action for the power sector. The government made two key policy announcements aimed at alleviating stress for both thermal and hydropower gencos.
The cabinet approved the recommendations of the High Level Empowered Committee (HLEC) constituted to suggest measures for the resolution of stressed thermal power projects. Among the recommendations approved were the grant of linkage coal for short-term power purchase agreements (PPAs), a major departure from the current coal allocation policy, which requires plants that supply power to short-term competitive markets to procure coal from e-auctions or global markets.

The second major announcement was the clearance of a slew of measures for the hydropower segment, including the decision to give the renewable energy tag to large hydropower projects. New funding provisions have also been approved. Earlier, only hydro projects of up to 25 MW capacity were considered as renewables and were eligible for incentives such as financial assistance and cheaper credit. A closer look at the recent policy moves and their expected impact on the sector…
Resolving stressed projects

To recall, the government had constituted the HLEC under the chairmanship of the cabinet secretary to address the issues of stressed thermal power projects. The committee submitted its report in November 2018. The government thereafter constituted a group of ministers (GoM) to examine the specific recommendations of the HLEC and forward its comments for consideration of the cabinet. The cabinet has now approved a majority of the recommendations. These include:
Amendments to the SHAKTI policy: The government has approved the amendments to the SHAKTI mechanism (issued in 2017) to allow coal linkages to be used against short-term PPAs. It has also approved providing short-term linkages. The HLEC had earlier noted that a number of coal-based power plants have fuel supply agreements (FSAs)/letters of assurance (LoAs) but do not have medium/ long-term PPAs. As a result, these plants have not been able to operate because linkage coal cannot be used against short-term PPAs. Currently, domestic coal allocation is provided for plants with long-term PPAs only.

The cabinet has also approved allowing generators that terminate PPAs in case of payment defaults by discoms to use the existing linkage coal for sale of power through the short-term route (using the DEEP portal or power exchanges). This is allowed for a period of up to two years or until they find another buyer of power under long/ medium-term PPAs. The move comes at a critical time when overdues to IPPs by discoms stand at over Rs 144 billion (as of December 2018).
Another key recommendation that has been approved is to allow central and state power generators such as NTPC to act as an aggregator of power, that is, procure power through a transparent competitive bidding process from such stressed assets and offer it to discoms till such time as their own plants are commissioned. In order to meet the fuel supply needs of such plants, the HLEC’s recommendation to use bridge linkage (if coal linkage is not available) has also been approved.
Further, bidders that have already participated in SHAKTI B (ii) auctions and could not secure linkage for the full annual contracted quantity (ACQ) can obtain linkage for the balance quantity by participating in future auctions after the benchmarking discount. The cabinet has approved coal linkage auctions to be held at regular intervals. (Under the scheme, auction of coal linkages for IPPs with PPAs but no linkages based on domestic coal was conducted in September 2017 and linkages were granted to 11,549 MW of capacity across 10 projects.)

More quantity for e-auction coal: The cabinet has approved an increase in the quantity of coal earmarked for e-auctions for the power sector. The coal ministry will earmark more coal under special forward e-auctions for the power sector by reducing the equivalent quantity from the spot e-auctions. Coal India Limited (CIL) will earmark at least 50 per cent of the total coal meant for e-auctions (including spot and forward e-auctions) for power.
Non-lapsing of coal supplies: If there is a shortfall in the supply of coal and it is attributable to the Ministry of Coal or the Railways, such shortfall need not lapse. It can be carried over to subsequent months up to a maximum of three months.

Late payment surcharge: The cabinet has approved the measures related to payment surcharges. The Ministry of Power (MoP) will need to engage with the regulators to ensure that late payment surcharges (LPS) are paid in case of delays in payments by discoms, as per the provisions of the PPA. The HLEC had earlier noted that discoms were not paying the mandatory LPS, which was hurting the viability of generators.

ACQ to be based on efficiency: The government has approved the recommendation that the ACQ for all thermal power plants, irrespective of their age or technical parameters, should be based on the normative station heat rates with a ceiling of 2,600 kCal per kWh. The HLEC, in its report, had noted that many smaller/older plants have a very high station heat rate and accordingly, have higher specific coal consumption. Hence, they have been allowed a higher ACQ of coal per MW of capacity as compared to more efficient plants of higher capacity.

Cancellation of PPAs/FSAs/LTOA in a post-NCLT scenario: Another HLEC recommendation that has been approved is that PPAs, FSAs and long term open access (LTOA) for power transmission, as well as forest and environmental clearances and all other approvals, including water, will be kept alive and not cancelled by the respective agencies, even if the project is referred to the National Company Law Tribunal (NCLT) or is acquired by any other entity. All of these may be linked to the plant and not the promoter.

Cancellation of PPAs for non-compliance of commercial operation date: The cabinet has approved the HLEC recommendation that states that if there is any delay in the commissioning of a project for reasons not attributable to the generator, the discoms may be advised not to cancel those PPAs. The PPAs may be kept on hold for a certain period so as to enable removal of impediments in the execution of the project.

For the hydropower sector, the qualification of large hydro projects as renewables allows these to qualify as part of the framework for non-solar renewable purchase obligation (RPO).
The power ministry has stated that HPOs will be notified as a separate entity within non-solar RPO. The HPO is applicable to projects commissioned after March 8, 2019. Necessary amendments will be introduced in the tariff policy and tariff regulations to operationalise the HPO. However, despite the renewables’ tag, new hydro projects will not automatically be eligible for any differential treatment for statutory clearances (such as forest and environmental clearances), which are available to small-hydropower projects.

Tariff rationalisation measures include providing flexibility to developers to determine tariffs by back-loading of tariffs after increasing the project life to 40 years, increasing the debt repayment period to 18 years and introducing an escalating tariff of 2 per cent.

Budgetary support has been provided for funding the flood moderation component of hydropower projects on a case-by-case basis. Further, budgetary support would be provided for funding the cost of enabling infrastructure like roads and bridges, limited to Rs 15 million per MW for up to 200 MW projects and to Rs 10 million per MW for above 200 MW projects.

In a press note explaining the rationale for these measures, the government stated, “The importance of hydropower is increasing even more as the country has targeted to add 160 GW of intermittent solar and wind power by 2022 and 40 per cent of the total capacity from non-fossil fuel sources by 2030. Discoms are reluctant to sign PPAs due to higher tariffs, particularly in the initial years. One of the reasons for the high tariff of hydropower is the loading of cost of flood moderation and enabling infrastructure in the project cost. In this backdrop, the decision has been taken to adopt measures to promote the hydropower sector including providing budgetary support for flood moderation cost and enabling infrastructure cost and tariff rationalisation measures to reduce tariffs and thus the burden on the consumer.” 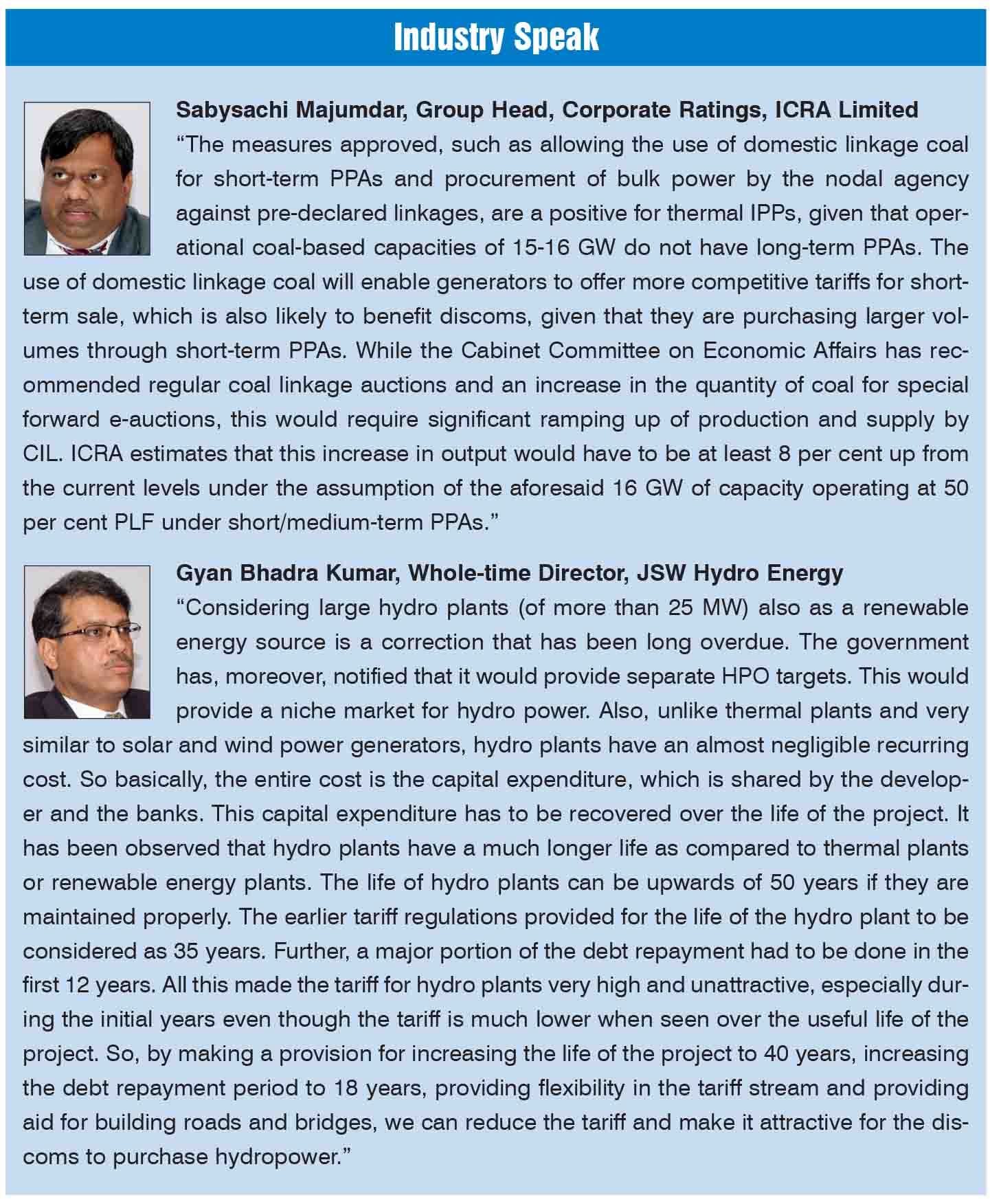 The measures for approval of stressed assets have been welcomed by the industry. That said, there are some areas of concern. For the hydropower segment, the industry feels that more needs to be done. According to Gyan Bhadra Kumar, whole-time director, JSW Hydro Energy, a key issue for the segment is the higher transmission and wheeling charges compared to renewables. “While solar and wind plants pay either no charges or concessional charges for transmission and wheeling of electricity, hydro plants are required to pay these charges for the full capacity. We expect the same principle to be followed for the levy of transmission and wheeling charges, irrespective of the source of generation.”
The interest subvention scheme, which was earlier proposed for stalled projects, has not made it to the list of measures announced for the hydro segment. Nor are there any measures for the promotion of pumped storage schemes.

Meanwhile for stressed projects, there are two HLEC recommendations that are still pending. These pertain to the payment security mechanism involving the bill discounting framework with discoms to address the issue of delayed payments, and to measures for improving the utilisation of stranded gas-based power projects. For the former, the power ministry has stated that a lot of ground has to be covered for implementing the payment security mechanism for private power producers and reviving gas-based stranded projects, as talks are on with the Reserve Bank of India (RBI) as well as the oil ministry on both the issues.

Further, ICRA notes that while measures such as allowing existing coal linkages to be used in case of PPA termination due to a payment default by discoms and the mandatory payment of LPS are positive, they may not act as a major deterrent given the modest financial profile of the discoms in many states and the difficulties in securing new PPAs for IPPs.
Other developments

Aside from the policy measures announced, relief for the sector has also come from the final Central Electricity Regulatory Commission tariff regulations for 2019-24, issued this month. These have minor changes to the draft regulations and are considered positive by analysts. Among other things, the base rate for the computation of return on equity at 15.5 per cent (for thermal stations and transmission systems), which was expected to be diluted, has been left unchanged. The regulations also provide relief on the recovery front. The capex for meeting the emission standard norms will be considered and recognised as part of the capital cost of the existing plant, while the tariff will be determined separately. Another positive is that the regulator has allowed the loss of 85 kCal per gross calorific value of coal between unloading and the firing point. Earlier, the generator had to bear the loss on fuel damage from unloading to the firing point, leading to under recoveries.

With the power sector reeling under huge stressed assets, the timing of the cabinet measures could not have been better. The RBI has maintained that there would be no dilution of its February circular, which directed lenders to move insolvency petitions against large non-performing assets. The Parliamentary Standing Committee on Energy had, in its August 2018 report, stated that about 66 GW of conventional energy is under various degrees of financial stress. These include 54,805 MW of coal projects (44 assets), 6,831 MW of gas (9 assets) and 4,571 MW of hydro (13 assets). While the cabinet measures should help in resolving the stressed assets issue, swift execution is key to preventing these assets from being mothballed.
Reya Ramdev

Financing activity in the power sector remained subdued in the past year. Although the sector has showed some improvement owing to several government initiatives such as the Ujwal Discom Assurance Yojana (UDAY), the Integrated Power […]

Powering Up: Addressing the challenges faced by stressed coal-based projects