The Indian LED market has undergone a sea change in the past couple of years, mainly on account of favourable government initiatives and a decline in LED prices. Demand aggregation and bulk procurement under the Unnat Jyoti by Affordable LEDs for All (UJALA) scheme changed the dynamics of the market, resulting in the plummeting of LED prices. Besides this, there is a growing demand for LEDs under the Street Lighting National Programme (SLNP) and the Smart Cities Mission.

On the technology front, with the advent of internet of things, the deployment of smart lighting system is gaining traction. It is helping not only in reducing energy consumption but also in the early identification of problems. Further, the use of LEDs based on technologies such as dynamic minimum operating voltage (DMOV) (ideal for tackling voltage fluctuations) and driverless low voltage direct current (LVDC) (well suited for solar photovoltaic [PV] energy sources) is witnessing an uptick.

On the pricing front, the LED market has witnessed a significant correction over the past couple of years. The procurement prices of LED bulbs have dropped by over 88 per cent due to demand aggregation and bulk procurement under UJALA. The drop in prices has led to faster adoption of energy efficient LED bulbs. Notably, in recent months, the decline in LED prices has been more pronounced. Currently, the selling price of a 9 W LED bulb is around Rs 70, less than half of what it was around eight months ago (Rs 160).

The growth in LED demand has primarily been on the back of various government schemes. The key among them is the National LED Programme, which was launched in January 2015 for promoting the use of efficient lighting technology at affordable rates. Spearheaded by public sector undertaking, Energy Efficiency Services Limited (EESL), the programme comprised UJALA and the SLNP. UJALA promoted efficient use of energy at the residential level, with the aim of replacing 770 million incandescent bulbs with LED bulbs by March 2019. As of April 17, 2019, 347 million LED bulbs have been distributed with the resultant energy savings estimated at 45 billion units per year and cost savings at Rs 180 billion. Apart from UJALA, private players in the market had sold 1.11 billion LED bulbs till December 2018. After successfully implementing UJALA, EESL has now launched the scheme internationally in countries such as the UK and Malaysia. The company also plans to make a foray into Canada, Bangladesh, Sri Lanka, Nepal and Saudi Arabia.

The SLNP scheme aimed to replace about 14 million conventional street lights in the country with smart LEDs by 2019. To this end, seven-year contracts were signed between EESL and urban local bodies (ULBs)/municipal corporations, where the latter will pay EESL from the cost savings achieved in lieu of energy reduction. As of April 15, 2019, the installation of 8.86 million LED street lights had been completed by EESL under the programme. This implies average energy savings of about 4,765 kWh per light per year, 3.28 million tonnes (mt) of carbon dioxide emission reduction per year, and nearly 794 MW of avoided peak demand. Another demand driver for the energy-efficient LED lights is the development of smart cities in the country. In addition to UJALA and the SLNP, various state governments are replacing the conventional lighting system with the energy efficient ones under the Smart Cities Mission. In February 2019, Coimbatore Smart City  issued a tender for the replacement of the existing conventional street lights with smart LED energy efficient lamps.

One of the key emerging technologies in the lighting space is the smart/intelligent lighting system. It uses sensor and control technologies as well as communication and information technologies. For example, an intelligent street lighting system illuminates to 100 per cent brightness only when it detects vehicular movement. At other times, the lights go dim by 30 per cent. The lighting system can also be outfitted with a central control monitoring system (CCMS), which allows remote monitoring and operation of individual lights or a group of lights. The system sends alerts for each light that needs attention, reducing the chances of failure and sudden repair. It also helps in light scheduling based on daylight and power saving needs.

Another new technology solution in the LED space is DMOV. This helps in tackling high voltage and electric surges faced in rural areas, and can operate efficiently at low voltage levels. Change in “on-board technology” through the use of integrated circuit-based drivers is also an emerging solution. It reduces the number of components in LED drivers. The use of fewer components reduces the cost and enhances efficiency. Chip scale packaging (CSP) or flip chip packaging that increases the lumen output is another technological solution for enhancing the operational efficiency and reliability of LEDs. Besides this, LED technology based on driverless LVDC enables energy saving by reducing the AC-DC current conversion loss, thereby making it compatible with solar PV projects. 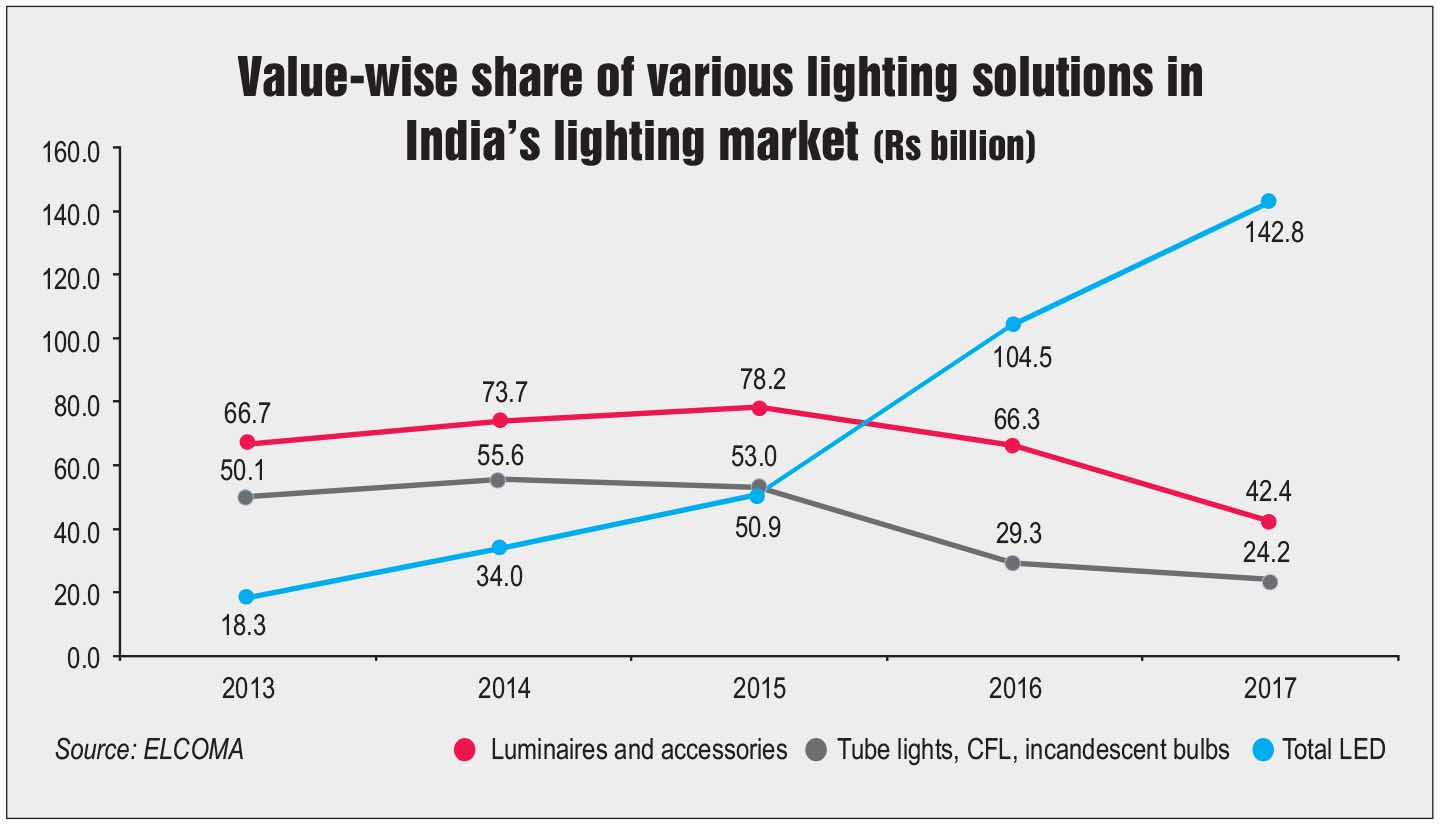 According to ELCOMA, the domestic LED market will reach Rs 261 billion by 2020, making up around 80 per cent of the total lighting market. As per another estimate by TechSci, the LED market is likely to grow at a CAGR of 24.66 per cent, in value terms, in the period 2016-22, to reach $3,758.74 million. The growth in LED demand will primarily be on account of the increasing government support to boost LED adoption and a growing awareness regarding lower power consumption of LED lighting products. Moreover, easy availability, affordable prices and the distribution of LED bulbs by the government will also promote the use of LED bulbs and street lights. An emerging area of demand for LED is the industrial segment, including warehouses and manufacturing floors. There has been a surge in LED demand in the residential segment with the implementation of government schemes. In the industrial segment too, the demand for LEDs is expected to gather momentum in the coming years. Further, the demand from Tier II cities is expected to grow in view of potential LED applications in street lighting and for domestic purposes.

The key challenge facing the LED market is the mushrooming of unauthorised production units that are manufacturing substandard products. These units use low-cost imports which yield poor quality products, thereby lowering consumer confidence. On the LED manufacturing side, import dependence for LED packages and various components such as wafers and chips poses a challenge. This constricts the development of a wider variety of LED lights domestically. The chances of product failure are high in the case of public street lights and floodlights, since these operate in very hot ambient temperatures and humidity. In order to tackle this, it is necessary to use superior quality components designed as per the highest standards. Further, it is necessary to maintain suitable temperature in LED components by improving efficiency as well as by using long-life aluminium capacitors and other semiconductor devices. On the consumer end, there is lack of awareness regarding the efficiency of final products with respect to lux and wattage, life expectancy, etc. Consequently, consumers often end up using products with higher wattage but lesser efficiency.

Overall, despite the growth in LED deployment in recent years, there is still significant scope for the adoption of LEDs in Tier II cities, rural areas, the industrial segment, etc. Besides, with the emergence of newer technologies, end consumers can choose from a wide array of products in order to best meet their requirements.

In the Spotlight: UJALA and SLNP schemes make impressive gains

The Unnat Jyoti by Affordable LEDs for All (UJALA) programme launched in January 2015 by Energy Efficiency Services Limited (EESL) gave a major impetus to the lighting industry. UJALA, which is the largest LED distribution […]

With the objective of facilitating faster adoption of electric mobility (e-mobility), Energy Efficiency Services Limited (EESL) has initiated a programme which envisages the replacement of existing government vehicles with electric vehicles (EVs). The company aims […]