The Unnat Jyoti by Affordable LEDs for All (UJALA) programme launched in January 2015 by Energy Efficiency Services Limited (EESL) gave a major impetus to the lighting industry. UJALA, which is the largest LED distribution programme in the world, aims to replace 770 million incandescent lamps with LED bulbs. Four years after its launch, more than 347 million bulbs have been sold under the programme at low prices of Rs 70-Rs 180 per bulb.

The Street Light National Programme (SLNP) has also been a critical part of the lighting industry’s energy efficiency drive. Also launched in 2015, the SLNP aims to replace all 13.4 million conventional street lights in India. So far, 8.8 million street lights have been replaced under the programme.

Further, the procurement prices of LED bulbs have dropped by more than 88 per cent owing to demand aggregation and bulk procurement under the schemes. UJALA and the SLNP have enabled estimated annual energy savings of over 50 billion kWh and monetary savings of Rs 200 billion.

Under the scheme, EESL has adopted a benefit sharing approach, which involves working with discoms. Under this model, the discoms do not have to invest in the upfront cost of energy efficient appliances. The upfront investment made by EESL can be recovered in two ways. The discom cost recovery method requires that the investment made is paid back as annuity over a period of 3-10 years by monetising the energy savings accrued. In the on-bill financing (OBF) method, EESL recovers the entire cost of replacement by deducting a certain amount every month from consumer bills over 8-12 months.

To extend the scheme to rural areas, the Gram Swaraj Abhiyan was launched in April 2018, under which LED bulbs were distributed to 16,000 Indian villages at a special price of Rs 50.

As of April 2019, about 8.8 million LED street lights have been installed by EESL under the programme resulting in annual energy savings of about 5,954.88 MUs, carbon dioxide emission reduction of 4.1 mt and avoided peak demand of 992.48 MW. Andhra Pradesh is in the lead with about 2.5 million street lights installed as of April 2019, followed by Rajasthan (1 million) and Gujarat (1.1 million).

The street lighting projects under the programme have been classified into five types – state-level projects, state and gram panchayat projects, urban local body projects, institutional projects, and projects under discussion. All states have been covered under the first four categories, except the five north-eastern states (Arunachal Pradesh, Nagaland, Manipur, Mizoram and Meghalaya), where street lighting projects are currently under discussion. Under the programme, EESL is replacing conventional street lights with LEDs, with no upfront cost to the municipalities. 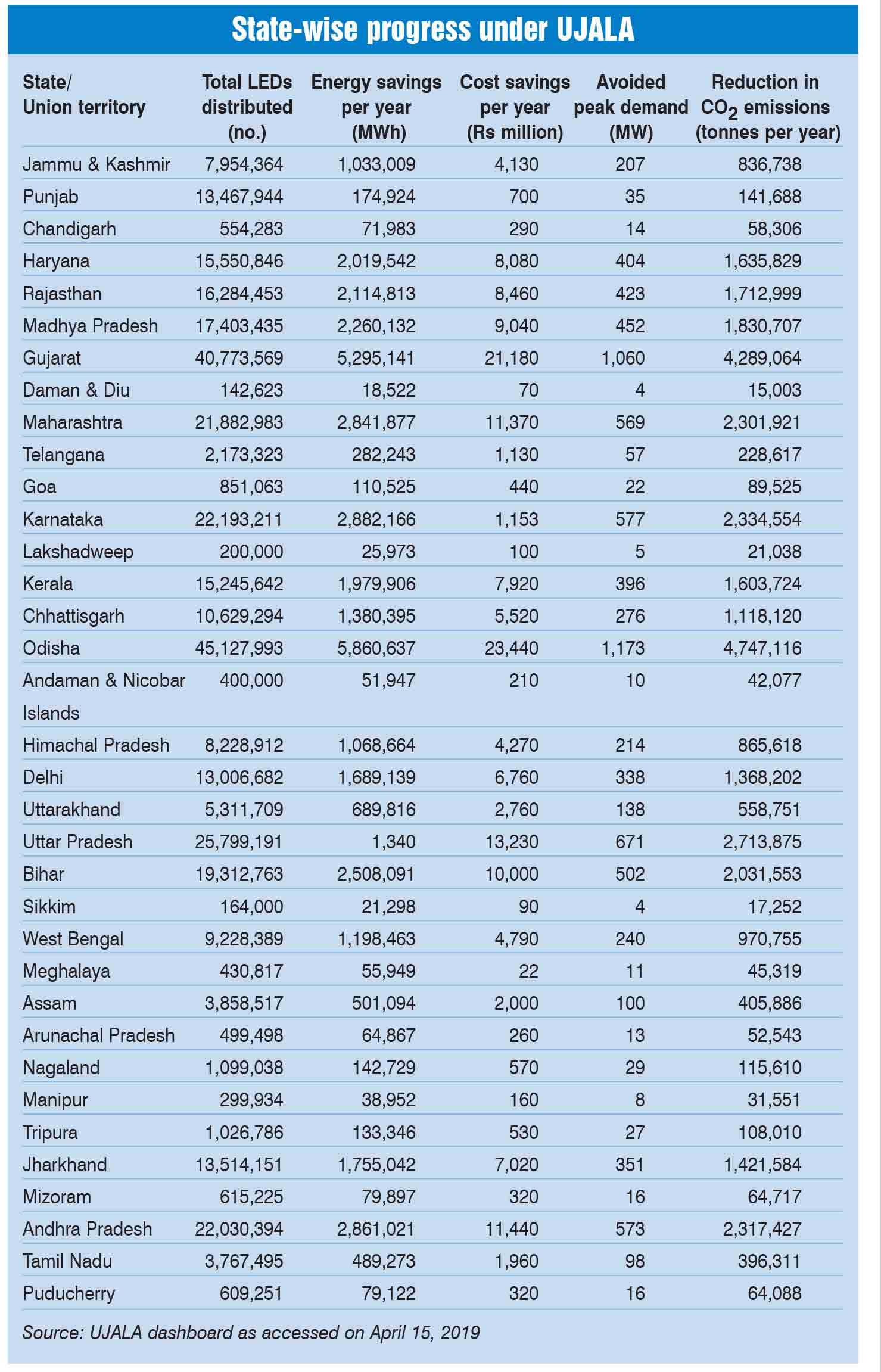 In August 2018, the government, EESL, and the World Bank signed a $220 million loan agreement and an $80 million guarantee agreement for the India Energy Efficiency Scale-Up Programme. The guarantee is expected to help EESL expand its portfolio and meet future investment needs. With some impressive results, UJALA and the SLNP have contributed significantly to the government’s energy efficiency initiatives. They have commercialised LEDs, both for private consumption in households and public consumption in the form of street lights.

The Indian LED market has undergone a sea change in the past couple of years, mainly on account of favourable government initiatives and a decline in LED prices. Demand aggregation and bulk procurement under the […]

Lighting the Way: SLNP gives an impetus to LED uptake

Light is essential for sustaining human life and enabling productive human activity. Most of the man-made, artificial sources of light use either electricity or fossil fuels and must, therefore, be used judiciously to minimise their im­pa­ct on natural resources and the environment. […]