The power ministry is preparing to launch the next set of reforms for the distribution segment. Over the past two decades, several reform schemes have been introduced in the segment – a one-time settlement scheme in 2001, a scheme for Financial Restructuring of State Distribution Companies in 2012, and the Ujwal Discom Assurance Yojana (UDAY) in 2015. However, all these schemes focused on short-term improvement of the discoms’ financial performance and there was no long-term roadmap for ensuring sustainable operations and finances. According to industry experts, fundamental reforms, as highlighted under the Electricity Act, 2003 and the Tariff Policy, 2006 (amended in 2016), have not yet been carried out.

Challenges such as inadequate tariff hikes, significant cross-subsidisation, minimal private participation, and lag in metering continue to hamper the segment’s progress. Many of these issues arise due to the state governments’ interference in discom operations as they intend to keep tariffs lower than the cost of supply. As a result, the discoms have been struggling to pay back to the generators and sign new power purchase agreements (PPAs), creating stress in the entire power value chain, especially in the generation segment. As per the PRAAPTI portal, the outstanding dues from discoms stood at Rs 757 billion as of end July 2019, an increase of 67 per cent over Rs 469 billion in July 2018.

In view of these challenges, a comprehensive distribution reforms package is in the works by the Ministry of Power (MoP). Power Line presents an outline of the reform plan…

To take control of the current situation and prevent further accumulation of dues, the MoP has mandated discoms to open and maintain a letter of credit (LC) as a payment security mechanism for gencos. The provision came into effect on August 1, 2019. The move is expected to resolve the issue of current dues though measures for clearing historical arrears are still awaited. It is likely that the revised tariff policy will have a provision for the payment of dues on a first-in-first-out basis as well as high carrying costs (interest rates) to ensure that discoms do not delay payments to generators.

In another development, the Appellate Tribunal for Electricity (APTEL) has taken up the matter of discoms’ performance suo motu and asked the state electricity regulatory commissions (SERCs) to explain the delay in tariff revisions, inadequate compensation to discoms and deferred revenue over the past three years. APTEL has appointed amicus curiae to assist the court in resolving the issues plaguing the power sector. The SERCs have been directed to file compliance reports by October 31, 2019, and the next hearing is scheduled on November 1, 2019. This follows the MoP’s letter to APTEL on the issue of the increasing the level of regulatory assets in July 2019. In an earlier order, passed in 2011, APTEL had asked the SERCs to initiate suo motu tariff revisions if discoms failed to file tariff petitions. However, little progress was seen on this front and the SERCs failed to report compliance after 2014.

The government has lined up major reforms for the distribution segment in the coming months. According to media reports, the reforms package will include a revamped version of UDAY and other schemes including the IPDS and DDUGJY, as well as new models for increasing private participation. The schemes will be linked to discoms’ performance, and funds will be released only if operational and financial targets are met. Funding from power sector lenders like the Power Finance Corporation will also be based on prudential norms with no provision for working capital loans, only short-term or long-term credit.

The existing distribution franchise (DF) model is also being modified to ensure greater participation by private players. The existing model mandates capital infusion by franchisees, which is not feasible and needs to be modified. The DF model has seen limited success so far with just about a dozen of operating franchisees at present, but the model holds potential for improving discom operations, particularly in high-loss areas.

The separation of wires and supply businesses in distribution is also one of the top priorities of the government. It introduced the Electricity Amendment Bill, 2014 in the Lok Sabha in December 2014 but failed to build consensus among the states. The MoP proposed a revised draft amendment in September 2018 and the draft is currently in circulation. The separation of wires and supply businesses will allow consumers to buy electricity from a retailer of their choice. The discom will be the sole owner of distribution infrastructure and charge for it. Meanwhile, there will be multiple suppliers allowing consumers to choose the one that provides better services and power at competitive rates. The government expects that this model will not face resistance from states because they will own the infrastructure. Going forward, the states may be asked to choose one of the models for the improvement of distribution operations – DF, carriage and content separation, and equity sharing (public-private partnership on the lines of Delhi discoms).

In addition, the new tariff policy has been sent to the cabinet for approval and is expected to be passed soon.  The policy will have provisions for penalties on load shedding, restrictions on pass-through of losses of over 15 per cent in tariff, cross-subsidy limitations, suspension of licences in case of non-availability of adequate PPAs, and tariff rationalisation measures.

The MoP has also formed a group headed by the special secretary to make recommendations for changing the structure of power sale and purchase in the country and for increasing competitiveness in the power market. The group will study the present system of power sale and purchase, which is largely governed by long-term PPAs and power trading, and suggest measures for deepening the power market in the country. 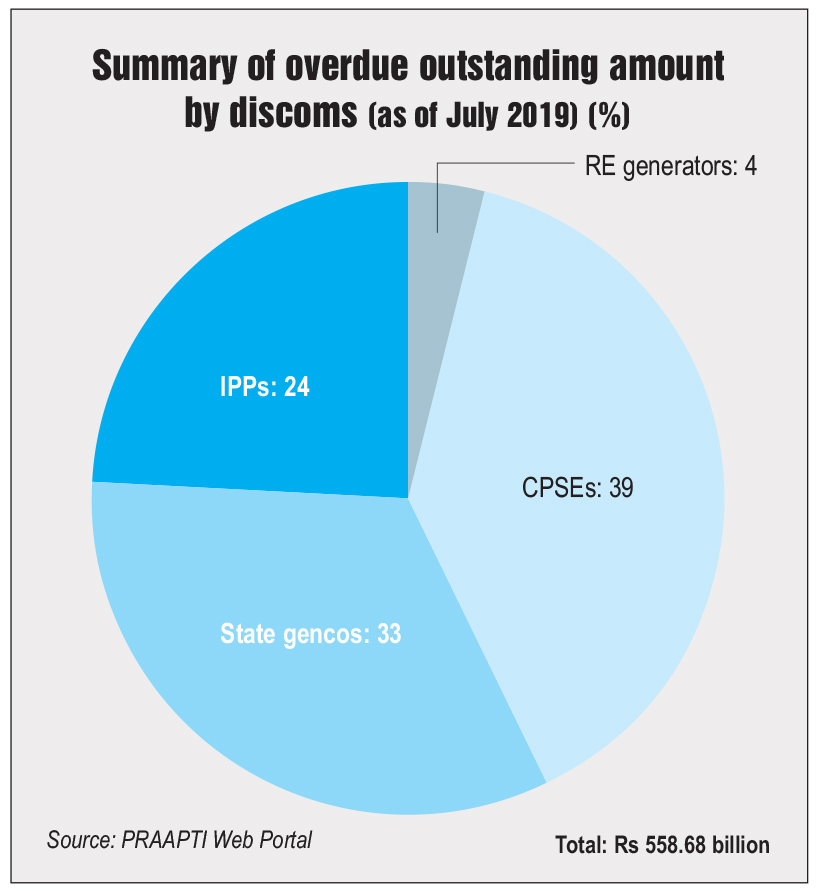 The government is not just focusing on structural and policy changes but also on the technological evolution of the distribution segment. Under the Saubhagya scheme, which ended in March 2019, over 26.4 million new consumers have been added to the distribution network in a span of 16 months. It is nearly impossible to conduct metering and meter reading in a timely manner for such a large base of consumers. Thus, the government is planning to automate the entire process through smart prepaid meters. With the prepaid facility, consumers will have the option to pay for the power they intend to consume in advance, benefiting them as well as the discoms. Further, technology will help in reducing aggregate technical and commercial losses.

The Draft Distribution Perspective Plan, which is under preparation by the CEA, envisages the conversion of all consumer meters into smart prepaid meters within the next three years. The plan also lays emphasis on 100 per cent metering of all consumers and providing electricity connections on demand. However, the high capex requirement for smart meters is an impediment given the current financial health of discoms. Energy Efficiency Services Limited’s (EESL) “pay as you save” model is likely to be helpful in this case. The utility has installed 500,000 smart meters across Uttar Pradesh, Delhi, Haryana, Bihar and Andhra Pradesh using the same model. Under the model, EESL procures smart meters and services from the system integrator with 100 per cent investment, providing discoms the benefit of zero upfront financial investment. The repayment to EESL is through the monetisation of energy savings, resulting from enhanced billing accuracy, avoided meter reading costs and other efficiencies. EESL aims to retrofit 250 million conventional meters with smart variants under the Smart Meter National Programme.

Overall, the government is focusing on reforms to increase competition, and create financially secure and technologically advanced distribution utilities. The objective is to gradually move to wholesale electricity markets, like in developed countries, where generators have the freedom to sell power to retailers and suppliers of their choice and consumers have the freedom to buy from retailers of their choice. Going forward, the on-ground implementation of the proposed reforms will be the key to turning around the discoms.