The Ministry of Power’s (MoP) Seventh Annual Integrated Ratings of State Power Distribution Utilities report for the review period 2017-18, released in October 2019, shows some signs of improvement in the performance of state distribution utilities. As many as 20 discoms witnessed an upgrade in rating, while one witnessed a downgrade. The number of discoms with “A+” and “A” ratings have gone up, with seven  and nine) discoms, respectively, falling under these categories for the review period 2017-18. In 2016-17, five discoms were rated A+ and two A. The improvement in discom performance during 2017-18 can be attributed to the decline in aggregate technical and commercial (AT&C) losses across  28 discoms, as well as the availability of audited accounts for 2017-18 for 36 discoms. Power Line presents the key highlights of the Seventh Annual Integrated Ratings of State Power Distribution Utilities…

Background: In July 2012, the MoP formulated an integrated rating methodology for evaluating the performance of state power distribution utilities. Designated credit rating agencies ICRA and CARE were assigned 21 and 20 utilities, respectively. The Power Finance Corporation is coordinating the rating exercise. Since the formulation of the rating methodology, the MoP has made periodic revisions based on the suggestions of utilities and stakeholders. The last revision in the rating methodology was made in March 2019, wherein benchmarks for power purchase cost and qualification of auditors were modified. The seventh integrated discom rating is based on the revised methodology.

Coverage: The integrated rating of state utilities is carried out on an annual basis and currently covers 41 discoms across 22 states. The state power/energy departments and private sector discoms are not covered under the rating exercise.

Parameters: The discoms are rated based on the scores assigned to them on their performance on various parameters. Broadly, these are classified as operational and reform parameters, external parameters and financial parameters. The operational and reform parameters include AT&C losses, efficiency of power purchase cost and digital payment facility, and carry a weightage of 52 per cent in the discom scores. The financial parameters cover cost coverage ratio, payables, receivables, and the availability of latest audited accounts, and carry a weightage of 33 per cent. Meanwhile, the external parameters take into account the regulatory environment and subsidy support from the state governments. They have a weightage of 15 per cent. Notably, certain parameters cover the current year’s performance as well as a relative improvement on a year-on-year basis. Apart from this, non-compliance with certain parameters carries negative scores. These include the unavailability of audited accounts (up to minus 12 per cent), non-filing of the tariff petition (up to minus 5 per cent), and an increase in AT&C losses (up to minus 4 per cent). 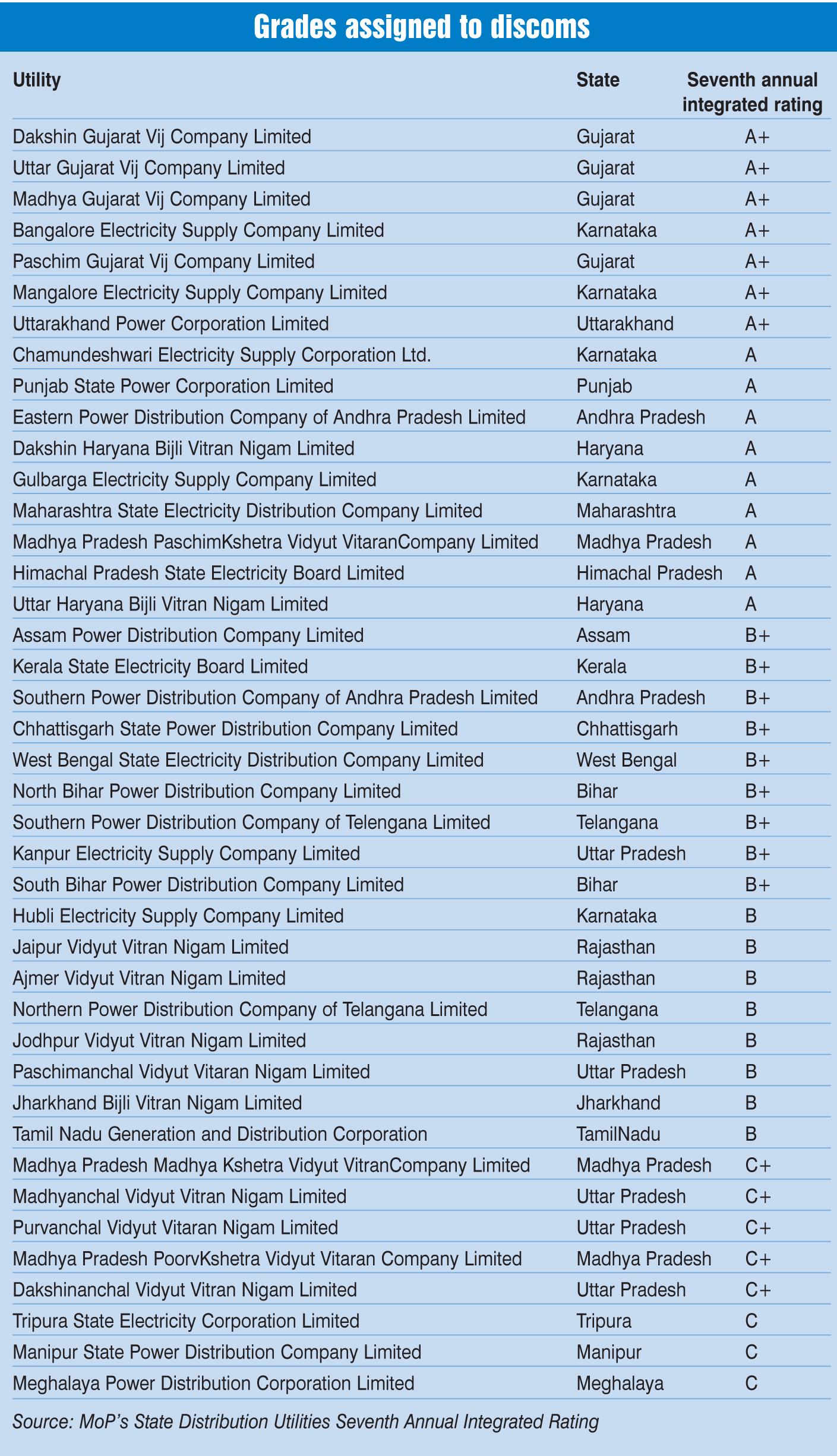 Cost coverage: For the review period 2017-18, the cost coverage ratio for 19 discoms remained low (less than 0.90) due to higher expenses and non-cost reflective tariffs. However, the median cost coverage ratio improved marginally to 0.91 in 2017-18 as compared with 0.88 in the previous year. Overall, while 24 discoms witnessed an improvement in cost coverage ratios, 14 reported a decline. The discoms of Karnataka (except HESCOM), Himachal Pradesh and Assam, as well as two of Gujarat (DGVCL and MGVCL) were the best performers in terms of cost coverage (greater than 1.0).

AT&C losses: For the review period 2017-18, 28 discoms showed an improvement in AT&C loss reduction. Nine utilities reported AT&C loss levels within 15 per cent during 2017-18 as compared to eight in 2016-17. The median loss level declined to 20.06 per cent as against 21.80 per cent in the previous year. While 18 utilities achieved more than 10 per cent reduction in AT&C losses, eight experienced a deterioration of over 10 per cent.

Net, net, while the majority of discoms have reported an improvement in performance during 2017-18, a lot remains to be done on the network strengthening and operational performance fronts to make the segment commercially viable. The industry has pinned its hopes on the implementation of the proposed tariff policy, UDAY 2.0 and the amendments to the Electricity Act, 2003 for ushering in growth and stability in the segment.