Over the years, captive power plants (CPPs) have emerged as a viable option for industrial and commercial consumers to meet their energy demand and hedge against the risks of high grid power tariffs. As per India Infrastructure Research, the aggregate installed capacity of captive power plants of 1 MW and above stood at 83 GW during 2017-18, increasing at a compound annual growth rate of 5.3 per cent since 2007-08. While coal has traditionally been the fuel of choice for most industries for setting up CPPs, solar is emerging as an alternative owing to its rapidly declining capital cost and the ability to meet renewable purchase obligation (RPO).

A look at the key trends in the captive power market…

India Infrastructure Research tracked  captive capacity of nearly 68 GW across various industries. An analysis of the tracked capacity shows that coal continues to be the key fuel source for the majority of CPPs, with a share of over 56 per cent. This includes CPPs that use domestic coal, imported coal and coal blended with coal washery rejects, petcoke and lignite. The abundance of fuel and the competitive capital cost of setting up large-scale coal-based CPPs are the two biggest reasons for their higher uptake.

Industries are increasingly looking at solar power-based captives to meet their power needs. This can be attributed to the improving cost economics of renewable power plants due to falling capital costs and favourable state and central government policies. Rooftop solar especially provides an attractive opportunity to industrial and commercial consumers to reduce their dependence on grid power and meet a part or whole of their energy needs through rooftop solar plants. They can be installed at transit systems, airports, hospitals, campuses, malls, industrial units and office complexes.

An industry-wise analysis shows that out of the tracked captive capacity, the metals and minerals segment has the largest share in CPP deployment. Some of the largest CPPs have been set up by the aluminium, copper, and iron and steel industries owing to their energy-intensive manufacturing processes. Some examples are Vedanta’s 1,125 MW coal-based CPP in Jharsuguda, National Aluminium Company Limited’s (NALCO) 1,200 MW coal-based CPP in Angul, and Jindal Steel and Power Limited’s (JSPL) 810 MW coal-based CPP in Angul. Apart from these, petrochemical (crude oil/petroleum extraction and refining), cement, sugar, chemical, textile, engineering, paper and pulp, and fertiliser industries as well as institutional users have witnessed significant CPP deployment.

Among the states, Gujarat leads CPP deployment with over 17 per cent share in the tracked captive capacity. The state hosts a large number of petrochemical companies such as Indian Oil, Reliance Industries and the Essar Group, as well as textile companies such as Aditya Birla Nuvo and Raymond, with CPPs based on gas and wind respectively. The state has a well-developed city gas distribution network and a high wind potential.

Odisha is another key state for captives where a number of metals and mining companies such as Vedanta, NALCO, JSPL and Steel Authority of India Limited have set up large-sized coal-based CPPs to meet their power needs.

Besides CPPs, rental power solutions provide a good option to industrial and commercial consumers for meeting their power generation requirements. Rental power solutions range from stand-alone temporary power packages to multi-MW units that can operate on fuels such as natural gas, coal and diesel. Diesel genset (DG)-based rental power solutions are most commonly deployed for construction projects across the residential, commercial and infrastructure (roads, bridges, metros, etc.) segments, industrial applications, and commercial/institutional enterprises such as banks, shopping malls, events, exhibitions and residential societies. Diesel gensets have a shorter installation time and enable quick start/stop; and the fuel for operating them is easily available.

Rental power solutions serve the purpose of both continual and non-continual usage for variable loads/power demands, particularly for industries running motors or other equipment that demands varying power during operation.

Group CPPs are being preferred by industrial users to meet their electricity needs. These projects are set up for collective use by many industrial and commercial consumers. Group CPPs empower small and medium industries that do not have the required investment and experience for setting up and managing an individual CPP but need uninterrupted power for their business operations. High industrial tariffs and the presence of large industrial clusters in the key states such as Maharashtra and Gujarat are the primary growth drivers for group CPP deployment. Renewables-based group CPPs offer the benefit of meeting RPOs and selling renewable energy certificates in the open market. The group CPP model provides economies of scale and reduces the power offtake risk as there are multiple parties procuring power.

According to the Electricity Rules, 2005, a power project is considered captive if an entity or entities consume at least 51 per cent of the power generated and own at least 26 per cent of the equity. However, the Ministry of Power (MoP) has proposed changes to these rules with respect to the shareholding structure of group CPPs. Under the existing rules, the ownership of a CPP is linked to the equity share capital in order to meet the 26 per cent ownership requirement and thus, in many cases, the ownership is linked to only the number of shares issued by the CPP. The draft amendments proposed by the MoP in April 2018 seek to link the ownership of the CPP to the issued and paid-up share capital in the form of equity share capital, with voting rights (excluding equity share capital with differential voting rights). The final norms are expected to be notified soon. 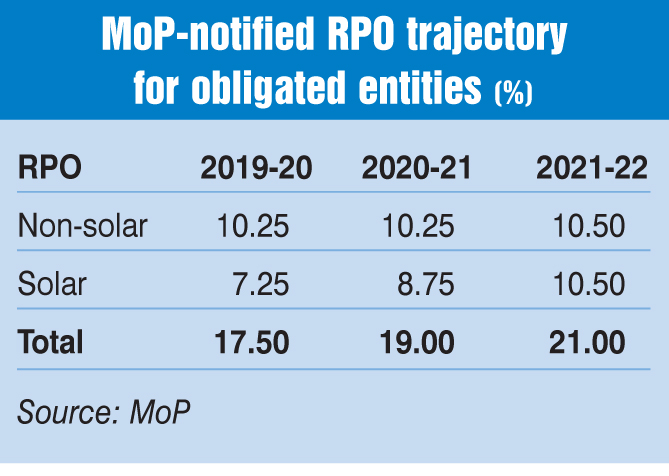 The central government is actively looking to address the concerns of industrial consumers and captive power producers. In her last budget speech (2019-20), the finance minister assured that the central government will work with the state governments to remove barriers such as cross-subsidy surcharge and undesirable duty on open access sale or captive generation for industrial and other bulk power consumers. Also, there are issues around shareholding in group captives, and many projects are termed as CPPs only to evade cross-subsidy surcharge on the sale of power. To address these concerns, the central government plans to soon issue revised norms to prevent the misuse of the CPP status. In May 2018, the MoP introduced draft amendments to the Electricity Rules, 2005, with stricter criteria for structuring and operating CPPs.

In recent months, the MoP has issued certain clarifications with regard to the RPO of CPPs. In February 2019, the MoP issued a clarification that the RPO of a CPP may be pegged at the RPO level applicable in the year in which the CPP was commissioned. As and when the company adds to the capacity of the CPP, it will have to fulfil the additional RPO as obligated in the year in which new capacity is commissioned. There should not be an increase in the RPO of the CPP without any additional fossil fuel capacity being added.

In the case of capacity augmentation, the RPO for the augmented capacity will be the RPO applicable for the year in which the CPP capacity is augmented.  If the CPP has surplus power, it can sell the surplus units to discoms under prevailing arrangements or in the power exchanges for RPO compliance.

The lack of adequate fuel supply is a key concern for CPP owners. CPPs have been receiving only half the required coal quantities while state utilities and independent power producers get priority in coal allocation. There is also uncertainty around the availability of domestic gas. Another issue being faced by CPP owners is open access restrictions that make the sale of surplus power unfeasible. There have been many instances where the state governments have imposed restrictions on open access.  Yet another bottleneck is congestion in the transmission system, which prevents CPPs from selling power in the short-term market. In the coming months, more action from the government is required to resolve these issues expeditiously.