Decentralised generation can take place at two levels. At the local level, site-specific energy sources are used to generate electricity. These include microgrids, which are generating entities that serve a limited number of consumers and are located near the consumption site. A microgrid can be either connected to the grid at a single point or be totally independent of it. Distributed generation can also take place at the individual level. The same technologies are used on a much smaller scale and are installed by an individual energy consumer. These systems can also be individually connected to the grid, thus becoming prosumers, that is, producers and consumers of electricity.

According to the National Research Development Corporation, and its partners, the Council on Energy, Environment and Water, and the Skills Council for Green Jobs, investing in distributed renewables, also known as decentralised renewable energy, is important for the country. Some of the benefits of decentralised generation are as follows:

More jobs: Rooftop solar is seven times more labour-intensive than large-scale solar and twenty times more than large-scale wind power. More people were employed for installing just 3.8 GW of rooftop solar capacity than for installing 26.2 GW of utility-scale solar in the past five years in India. Given India’s young population and imperatives of rapid job creation, strengthening support for distributed renewables is a key recommendation, and is aligned with the experience of other countries around the world.

Equitable and inclusive energy access: The aim of distributed renewable generation is to make the production and consumption of energy accessible and inclusive, as this is critical for livelihood generation and sustenance. Micro- and mini-grids, rooftop solar, and micro hydroelectric projects generate electricity in remote villages and rural areas, making power accessible to those who need it most. The small-scale nature of such projects also supports the entrepreneurship model. Further, small-scale microgrid systems require a short gestation period, and enable fast and easy capacity additions when required.

Better distribution efficiency: By generating electricity close to the point of consumption, distributed renewables can minimise transmission and distribution losses. Almost 20 per cent (some say up to 35 per cent) of the electricity generated in India is wasted or stolen, leading to severe financial distress for distribution companies. This can have implications for the entire energy sector. Recently, there have been several cases where power discoms have delayed or defaulted on their payments, and in a few cases, are even considering renegotiating their existing solar power purchase agreements. Further, as India looks at electrifying transport in a big way, demand for electricity will become more distributed. This presents a strong case for investing in distributed renewables such as solar-powered charging stations for cell phones, electric vehicles, etc. Distributed generation systems can also reduce peak demand, and offer an effective solution to the problem of high peak load shortages.

Improved grid resilience and reliability: With India planning to add a massive 500 GW of renewable energy capacity to its electric grid by 2030, it is critical to plan what kind of grid architecture will support this level of renewable integration. In places where grid expansion is prohibitively expensive, off-grid renewables are economically viable. In addition, having multiple decentralised nodes of power generation enhances grid resilience. In contrast, in a centralised grid, a single failure can take down the whole system, as seen in the 2012 power blackout, which plunged 670 million people into darkness. Further, in distributed generation systems it is easier to maintain power, voltage and frequency levels as compared to a centralized system. They also offer the possibility of combining energy storage and grid management systems with reduced grid congestion.

Benefits for agricultural and rural consumers: The agricultural sector consumes about a fifth of the electricity generated in India. Agriculture in India largely relies on rainfall and subsidised grid electricity, which is often supplemented with polluting diesel-based pump sets for irrigation. To reduce the reliance on diesel, government programmes, such as KUSUM (Kisan Urja Suraksha evam Utthaan Mahabhiyan) at the central level, and the Suryashakti Kisan Yojana in Gujarat, have been launched to provide incentives and subsidies to help farmers transition to solar-based irrigation. Decentralised agro-photovoltaic (PV) systems combine agricultural and solar generation to provide clean energy for agriculture and improve land use efficiency, while creating jobs in the rural economy.

Reciprocating engines: These can be fuelled either by diesel or natural gas (or even biogas), with varying emission outputs. Almost all engines used for power generation are four-stroke and operate in four cycles of intake, compression, combustion and exhaustion. Reciprocating engines are manufactured in various size ranges. Their typical usage is providing continuous power or backup emergency power.

Microturbines: These are an emerging class of small-scale distributed power generation systems in the size range of 30-400 kW. A microturbine consists of a compressor, combustor, turbine and generator. Most compressor and turbine designs are single-shaft and use a high speed permanent magnet generator, producing variable voltage, variable frequency alternating current (AC) power. Most microturbine units are designed for continuous operation with higher electric efficiencies.

Combustion gas turbines: Simple cycle combustion turbine units start at about 1 MW. These turbines can also be configured as combined cycle power systems to achieve up to 15 MW, also called industrial or mini turbines. Combustion turbines entail low installation costs, generate low emissions and require minimal maintenance. However, due to their low electric efficiency, these turbines are limited to mostly combined heat and power applications. Cogeneration distributed generation installations can be used to provide a continuous supply of steam or hot water.

Solar PV: PV systems, or solar panels, are made up of several small cells that convert light radiation into electricity. PV cells produce direct current electricity, which is then inverted for use in an AC system. PV systems produce no emissions, are reliable and require minimal maintenance to operate.

Wind turbines: Wind turbines utilise wind to produce electricity and require no additional investments in setting up large infrastructure such as new transmission lines. Thus, they are commonly employed for remote power applications.

Biogas: The Ministry of New and Renewable Energy (MNRE) has been supporting programmes for promoting biogas as a clean fuel for domestic cooking, off-grid and grid power generation and transport applications. Biogas generation from agricultural waste is also emerging as a potential area, particularly in view of the rising environmental risks due to burning of paddy straw in north India. Thus, there is a strong need to undertake research and initiatives for technology development and demonstration to accelerate the use of biogas technology as a potential source of energy generation, and as a solution for sustainable agricultural development.

In India, many renewable and non-renewable energy technologies are being employed in decentralised generation projects. Some of these are given in the accompanying figure.

A key feature of microgrids is their ability to seamlessly separate and isolate themselves from the utility during a utility grid disturbance with little or no disruption to the loads within the microgrid. A microgrid can automatically resynchronise itself when the utility grid returns to normal functioning, and reconnect itself to the grid in the same seamless fashion. In rural areas, smart microgrids can provide clean, reliable, affordable and scalable electrical power. In India, rising fuel costs, under-investment in old infrastructure and climate change concerns are some of the biggest challenges being faced by the energy industry today. A micro smart grid can deliver the benefits of renewable energy sources, while improving the reliability, security and useful life of electrical infrastructure. Bringing together all stakeholders – state and local governments, utility companies, public electricity regulators and IT companies, can help in the development of basic smart grid technologies.

Policy certainty can maximise the potential of renewable technologies. For example, much has been speculated about India’s plans to expand battery storage to maximise renewables, but no incentives or regulations have been finalised to support storage. However, guidelines were issued in July this year for performance testing of storage batteries (lead acid and nickel-based chemistry type) in test labs for compulsory registration with the Bureau of Indian Standards in the Solar Photovoltaics Systems, Devices and Component Goods Order, 2017.

The following are some of the other policies adopted by the government to support decentralised generation.

Storage devices are one of the critical components of microgrids. If solar and battery technologies continue to grow at the current rate, grid parity could be achieved even before 2033. That said, there are major challenges in transforming the energy sector. For example, infrastructure upgrades are required for the outdated electricity grid, which experiences high losses and frequent outages. In addition, the existing technology is not capable of communicating problems in real time. Therefore, grid modernisation must be the sector’s top priority to improve efficiency and availability. This is the first step towards preparing for future integration of both conventional and renewable power into the grid.

While distributed generation provides many benefits, it also brings complexity to a traditional centralised model of generation and transmission, creating challenges for utilities and transmission system operators. For example, third-party sale of electricity may displace utilities with retail customers. Utilities may need to upgrade their distribution infrastructure to accommodate two-way power flow and manage variability of generation at the distribution level. Distributed sources also change the load curve of a utility. Owing to these challenges, distributed generation may face opposition from existing players, including owners of hydropower infrastructure and independent power producers, which are benefiting from the current system. 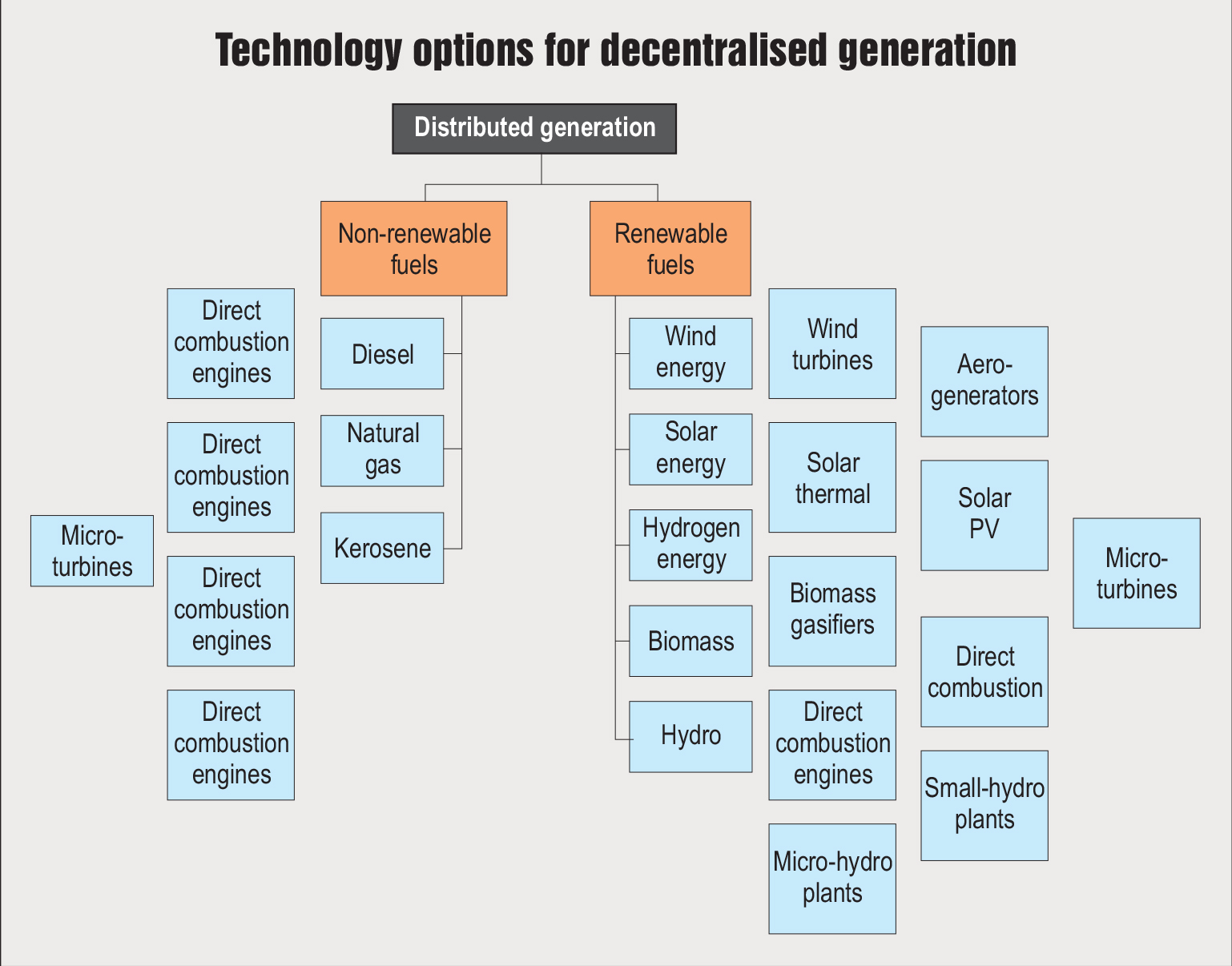 It is hard to find a more dynamic energy market than India’s, where governments and utilities are striving to meet the electricity demands of a growing, increasingly urbanised and economically empowered population.

As per Somesh Kumar, EY India Power & Utilities Leader, while the first tipping point of energy transformation is forecast to hit a little later in India than in other global regions, it could be reached earlier if the government can back its ambition with supporting policies, regulations and investments. Investing in clean energy to power the economy is in the country’s strategic interest and will help combat global climate change. As the country charts its clean energy transition, a well-thought-out policy framework for distributed renewables can ensure sustainable and equitable energy access for all.