The union government announced a series of economic measures and a Rs 20 trillion stimulus package under the AtmaNirbharAbhiyaan to revive the Covid-battered economy. The package includes a mega Rs 900 billion liquidity injection for discoms, which would be extended as loans by REC Limited and Power Finance Corporation (PFC) Limited, aimed at clearing their liabilities to gencos. The loans would be given out in two tranches – 50 per cent in Tranche I and the balance in Tranche II. While Tranche I is expected to be disbursed by the second quarter of 2020-21, Tranche II will be disbursed later in the year.

In a key development, the government is likely to hike the liquidity package being offered to the discoms. Earlier, the package aimed to clear the outstanding discom dues to genco up to March 2020; however, following a request from various state/union territory governments, the package is now likely to be extended to cover losses up to June 2020. The power ministry has also circulated a draft cabinet note on raising the borrowing limit of discoms to enable them to qualify under the liquidity package.

Hike in the liquidity package

The government is likely to enhance the liquidity package for discoms to Rs 1,250 billion from Rs 900 billion, which had been announced as a part of the Rs 20,000 billion stimulus package to mitigate the impact of Covid on the economy under the AtmaNirbharAbhiyaan. Initially, the liquidity package entailed the granting of loans by PFC and REC to discoms for the payment of dues till March 2020; however, it is now expected to be extended for the payment of outstanding dues by two more months, that is, till May 2020. This was following a request from the states to hike the liquidity package given the extension of the period of the lockdown, which has further inflated the discoms’ outstanding dues.

Raising the borrowing limit of discoms

State-wise, Maharashtra became the first to avail of the loan facility, with the disbursement of Rs 25 billion by REC to Maharashtra State Electricity Distribution Company Limited (MSEDCL). A similar amount will be disbursed to MSEDCL by PFC. Meanwhile, the Uttar Pradesh government has sought a Rs 209.4 billion loan, which is by far the largest loan application under the scheme.

In another development, PFC has directly cleared the pending dues of Andhra Pradesh’s discoms, amounting to around Rs 6 billion up to March 2020, to various renewable energy developers. The dues were on account of the Andhra Pradesh government stopping payments to developers following a standoff. Earlier, the state government had provided a standing guarantee to avail of the loan, which was credited directly by PFC and REC to renewable energy developers under the AtmaNirbharAbhiyaan. Apart from this, REC has sanctioned Rs 20 billion for Punjab and Rs 20.32 billion for Rajasthan. While all states will get a 10-year loan at 9.5 per cent, Punjab will get a five-year loan at 9 per cent.

With regard to participation in the scheme by the Delhi discoms, the state government has allowed the three private discoms to avail of special loans under the package. BSES Rajdhani Power, BSES Yamuna Power and Tata Power Delhi Distribution have asked for loans of Rs 30.5 billion, Rs 23 billion and Rs 10 billion respectively, totallingRs 63.5 billion. 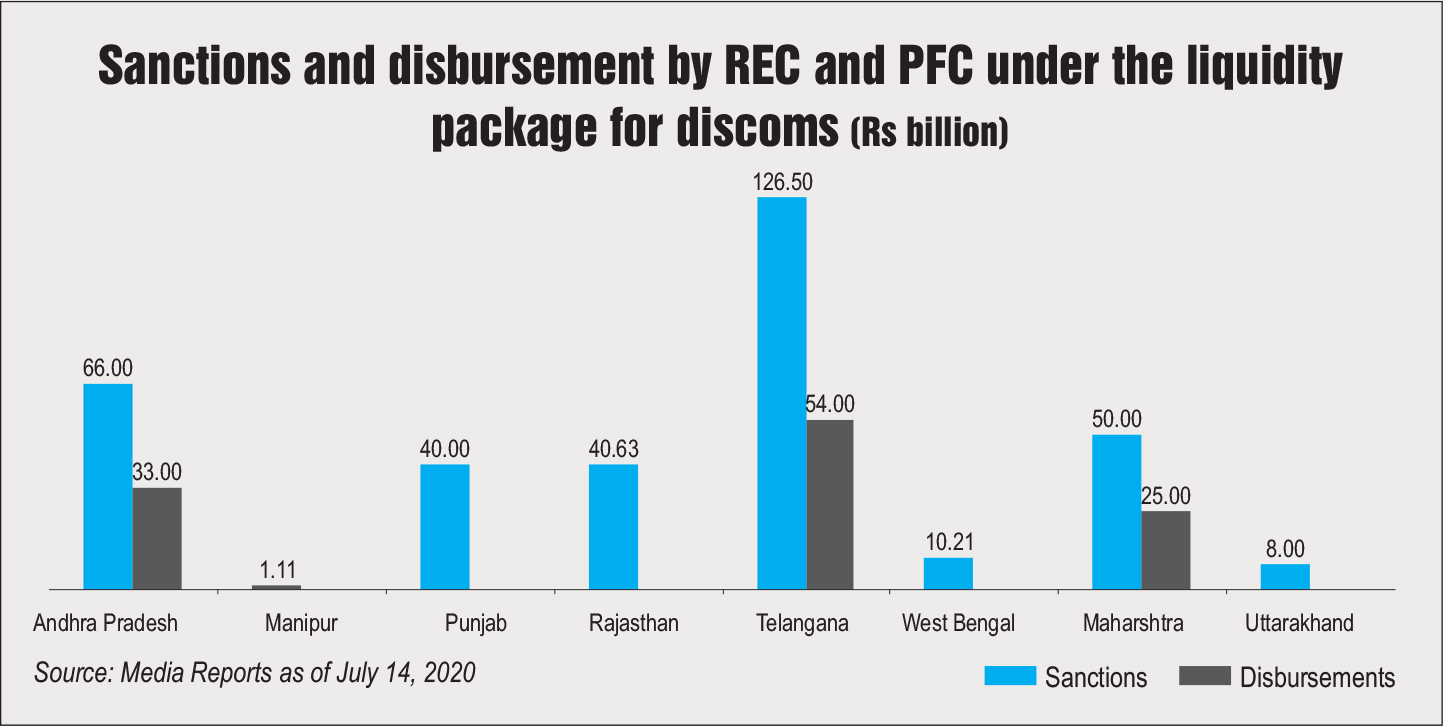 Privatisation of power distribution in UTs

Another key measure announced for the power distribution segment under the AtmaNirbharAbhiyaan is the privatisation of power distribution in UTs, which is expected to serve as a model for replication at the pan-Indian level. The government’s efforts in this direction have started gaining steam. The central government has appointed two consultants to help with the privatisation process. While PFC has appointed Deloitte to help with the sale process to privatisediscoms in the UTs of Puducherry, Chandigarh, and Andaman & Nicobar Islands, SBI Capital Markets Limited has received the mandate for Dadra & Nagar Haveli, Daman & Diu, Jammu & Kashmir &Ladakh. The consultants will help with the preparatory work for the exercise, which is likely to be completed by December 2020. The power ministry, under whose aegis the UTs currently fall, will also issue the standard bidding documents.

To conclude, the liquidity package for the discoms will undoubtedly help kickstart cash flows in the power sector and bring immediate relief for gencos, which have been facing mounting dues from discoms. However, the long-term success of the package hinges on the implementation of various other loan terms stipulated under the scheme, such as the installation of smart meters, and the liquidation of dues and subsidies by the state governments.