Pumped storage is an established, proven and mature storage technology. At present, it is the only viable technology for large-scale energy storage. A pumped storage plant (PSP) stores energy in the form of gravitational potential energy, pumped from a lower elevation reservoir to a higher elevation one. During periods of peak power demand, the stored water is used to produce electric power, which is used for load balancing. A PSP usually runs on low-cost off-peak electric power. Moreover, PSPs allow the storage of excess energy from solar, wind or baseload sources (such as coal and nuclear) for periods of high demand.

PSPs offer several advantages such as low operational cost, no degradation over the life of the project, high cycle efficiency of above 80 per cent and long project life of more than 60 years. The flexibility of pumped hydro storage (PHS) capacity creates a flatter net load profile for thermal generating units, allowing them to operate in a steadier mode and thus reducing the need for costly ramping, start-ups and shutdowns. This capability is particularly important in systems that have a high share of renewable energy, which tends to increase the overall variability in the net load profile. The operational flexibility of PSPs can influence power flows in the transmission network. Depending on its location, a PSP may, therefore, reduce transmission congestion, improve the utilisation of transmission assets and reduce the need for new transmission capacity. The high flexibility of PSPs and their ability to rapidly switch between pumping and generation means that a PSP plant can provide up to twice its capacity to meet system ramping needs.

Further, increased electrification and a focus on providing 24×7 power is driving  a dynamic demand-driven power market, which has increased the peak demand. Further, with plans under way to increase the share of renewables in the energy mix to 450 GW by 2030, power generation has become more intermittent. Together, the two trends will increase the overall variability in grid operations, which will require flexible energy sources such as PSPs.

As per the Central Electricity Authority (CEA), India has nine pump storage projects with a total capacity of 4,785.6 MW as of November 2020, installed in various locations across the country. However, only six plants with an installed capacity of 3,305.6 MW are working in pumped mode. The remaining three are not currently operational. Further, there are three under-construction PSP projects with a total capacity of 1,580 MW. The 1,000 MW Tehri Stage II project in Uttarakhand being implemented by THDC Limited is likely to be commissioned by 2022-23. It will be the first PSP in the central sector. The Kundah PSP Stages I, II, III and IV (500 MW) being implemented by TANGEDCO in Tamil Nadu is likely to be commissioned by 2023-24, while the Koyna Left Bank (80 MW) in Maharashtra being implemented by the Water Resources Department of Maharashtra is expected to be commissioned by 2025-26.

The CEA has identified 63 sites for the development of pumped storage schemes with a total installation of 96,529.6 MW in different parts of the country. Currently, survey and investigation is in progress for eight projects totalling 7,530 MW. These projects are the 600 MW Upper Indravati, the 320 MW Upper Kolab and the 500 MW Balimela in Odisha; the 2,000 MW Sharavathy and the 1,260 MW Saundatti in Karnataka; the 500 MW Kodayar and the 1,000 MW Sillahalla Stage I in Tamil Nadu; and the 1,350 MW Upper Sileru in Andhra Pradesh. The detailed project report for the Turga project (4×250 MW) in West Bengal has been approved  and construction is expected to start shortly, while the 1,200 MW Pinnapuram project in Andhra Pradesh is under examination.

There are several issues in the adoption of PSPs. According to industry players, PSPs currently lack policy focus. PHS is treated as a generation facility. Hence, its contribution to renewable energy integration, grid stability and the clean energy agenda has not been recognised. The office memorandum released on March 8, 2019, on measures to promote the hydropower sector, redesignated large hydro as renewable energy, but remained silent on PHS and its potential. Also, the Electricity Amendment Bill, 2020, does not mention storage.  Further, competitive markets are both an incentive and a hurdle to the development of PSPs as most competitive markets do not currently pay for grid services such as frequency regulation offered by advanced PSPs even in developed markets. While most PSPs were built to meet the peak demand by storing when power is cheap and selling when market prices peak, surging solar power generation is blunting the demand peaks, thus narrowing daily fluctuations in wholesale power prices.

With regard to PSP deployment, there are issues related to suitable site selection, finalisation of the project layout, operating limitations during monsoon, machine selection and equipment supply timelines. Monopoly in the supply of equipment and limited financing options also hinder the adoption of PSPs. Moreover, PSPs are associated with high cost and long gestation period, operational limitations, and environmental issues as most of the existing reservoirs are protected areas. To foster greater uptake, the functions and benefits of PSPs need to be highlighted. 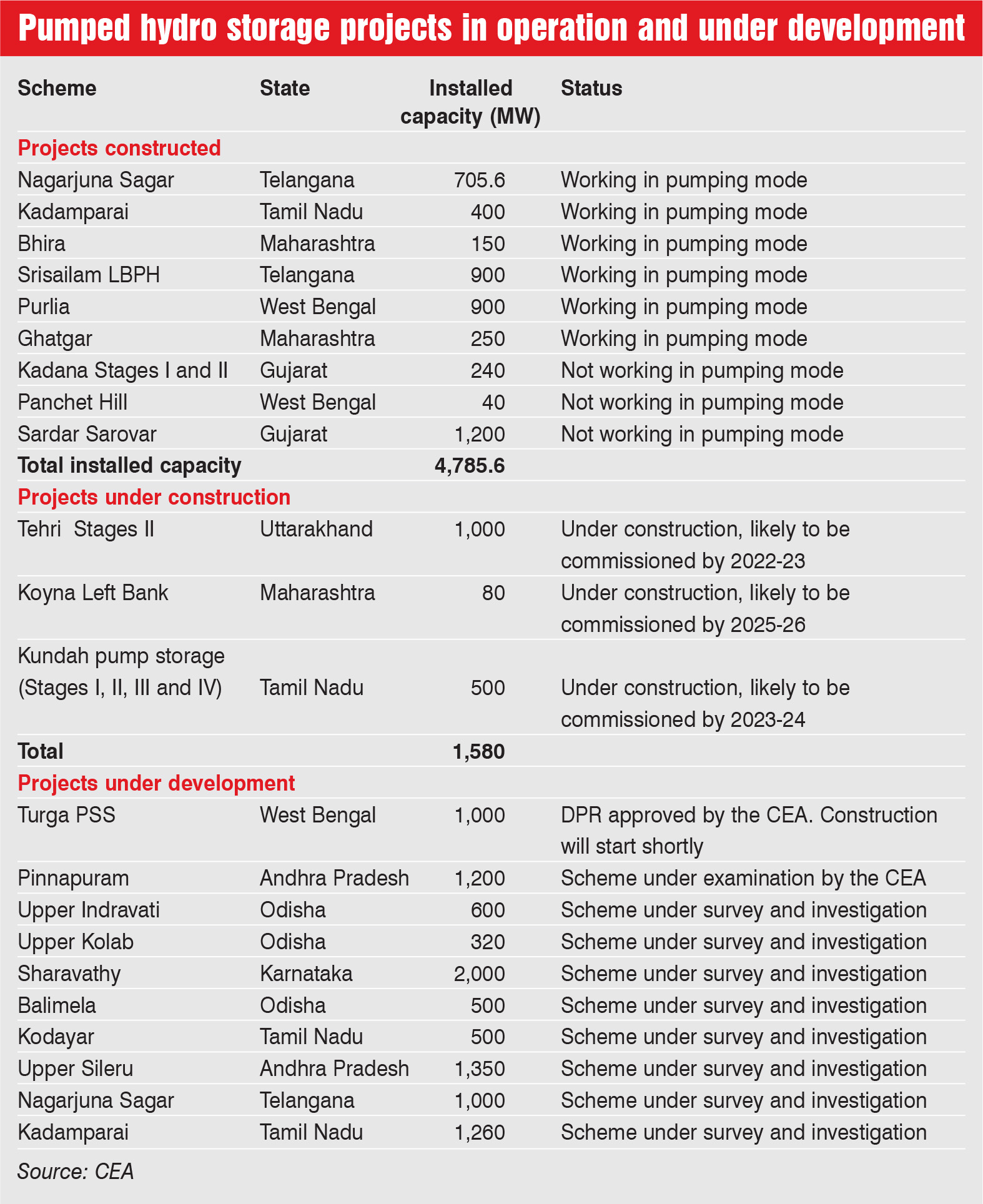 The issue of land acquisition/transfer can be resolved by providing specific clauses  in the Land Acquisition Act. Further, environment and other related clearances need to be provided by government bodies in a time-bound manner. Developers also suggest that PSPs should be accorded preferential treatment in merit order despatch, and need to be treated as grid assets with assurance for recovery of annual fixed costs. They should be incentivised according to their storage capabilities based on the number of units and duration of storage. Renewable energy generators may be made to provide/contract storage capacity at a defined minimum percentage of their installed capacity to ensure generation security and grid stability.

Further, there is a need to develop market mechanisms that allow all flexible resources to provide services in order to meet the electric grid requirements. These include very fast responding systems that provide critical capacity during key energy periods. Further, there is a need to develop broadly accepted economic models that evaluate energy storage technologies based on their ability to provide key supporting services to the overall electric grid, taking into consideration project life cycle costs, performance and energy storage system degradation.

The government should recognise the energy security role that such bulk energy storage technologies play in the domestic electric grid, and how this could be enhanced. According to hydropower developers, the CERC can consider establishing a common methodology for assessing the value of energy storage products that can be utilised across the spectrum of technologies. Viable tariffs and provisions for interest subvention may also be provided.

On the technology front, a relatively new approach for developing pumped storage projects is to locate the reservoirs in areas that are physically separated from the existing river systems. These projects are termed as “closed-loop” pumped storage because they have minimal to no impact on the existing river systems. After the initial filling of the reservoirs, only make-up water is required to offset the evaporation or seepage losses. As per developers, off-stream closed-loop projects could be classified as a separate category for all statutory requirements, and separate guidelines should be made for the development of these projects.

Net, net, PSPs can support the government’s clean energy agenda and provide energy security. Hence, the exemptions for renewable energy should be made applicable to PSPs. Given the influx of variable and intermittent renewable energy, PSPs can play a key role in providing balancing power. Going forward, it is important to ensure the timely completion of ongoing PSPs, add new capacity, and address policy and regulatory issues to facilitate the development of PSPs.