The entire world is still in the grip of Covid-19, which has raged on for more than a year and shows no signs of abating. It has led to insurmountable consequences for public health and economies worldwide. Governments across the globe have announced significant policy interventions to blunt the impact of the pandemic on the economic health of citizens. Many countries have taken this pandemic as an opportunity to change course as they opt for more green recovery packages, rebooting the economy with increased clean energy investments. Meanwhile, others have remained conservative and continued to support greater fossil fuel-related investments.

India has been progressing well towards its Paris Agreement goals with huge renewable energy capacity additions under its belt. However, its renewables growth has hit a snag of late, owing to policy uncertainty, poor discom health and financing issues. The pandemic has further exacerbated the challenges and delayed project commissioning timelines. While the government’s timely intervention through a host of reforms to support the energy industry is a welcome step, its focus is on the overall power sector, rather than just renewables and clean energy. Even the February 2021 union budget announcement did not specifically address the many long-standing issues in the country’s renewables space.

A recent report titled “How Green is India’s Stimulus for Economic Recovery?” by the Institute for Energy Economics and Financial Analysis (IEEFA) and the International Institute for Sustainable Development (IISD) reviews the Covid-related policy measures taken in the energy space and suggests next steps to promote an economic recovery driven by a green stimulus.

Power Line presents the key findings of the report…

Greening of the fiscal stimulus

An analysis of data from Vivid Economics on fiscal stimulus packages across 30 major economies shows that a total of $14.9 trillion has been allocated to Covid-19 recovery packages. Of the total sum, roughly 31 per cent ($4.6 trillion) is dedicated to areas such as agriculture, industry, waste, energy and transport based on fossil fuels. Only $1.8 trillion of these fiscal interventions are green.

The same data shows that India has approved $325 billion in total fiscal stimulus packages in response to the pandemic, largely supporting activities in the industrial and energy space. Many of the country’s recent stimulus interventions have been green, especially those announced in the union budget, which have improved its Green Stimulus Index score. Further, the IISD along with various other organisations has developed the Energy Policy Tracker (EPT), which tracks public money commitments to different energy types. As of March 3, 2021, commitments of over $686 billion have been made across 31 major economies. Roughly 40 per cent of the commitments support fossil fuel energy as against 38 per cent for renewable energy.

The EPT data highlights that India has committed the maximum amount of money to the energy sector as of March 2021. At least $122 billion has been committed to supporting energy since January 2020, of which 15 per cent is for fossil fuel-based energy, 28.5 per cent for renewable energy and the remaining large portion for “other” energy sources. This includes budgetary transfers, policy support, public finance and investments by state-owned enterprises.

A total of 70 policies have been identified by EPT between January 2020 and March 2021 to provide some level of support to the energy sector. The data is more comprehensive for the central level owing to the large number of measures announced in 2020 and accounts for 75 per cent of the policy interventions considered. The state-level data only includes key policy announcements. The EPT data shows that 36 per cent of the new policy measures are for fossil fuels, 48 per cent for clean energy and 17 per cent for “other energy” sources, which are categorised neither as fossil fuels nor as renewables.

In the fossil fuel space, the main support measures are focused on expanding commercial coal mining, developing a new coal transportation infrastructure, providing LPG cylinders to below poverty line households and extending the city gas distribution network. In the renewables space, support measures include central government initiatives such as the production-linked incentive (PLI) scheme to boost domestic manufacturing, decarbonisation of Indian Railways, priority sector lending to renewables and infusion of additional capital to the Solar Energy Corporation of India and the Indian Renewable Energy Development Agency. Many states also announced important policy interventions in the solar and EVs space. 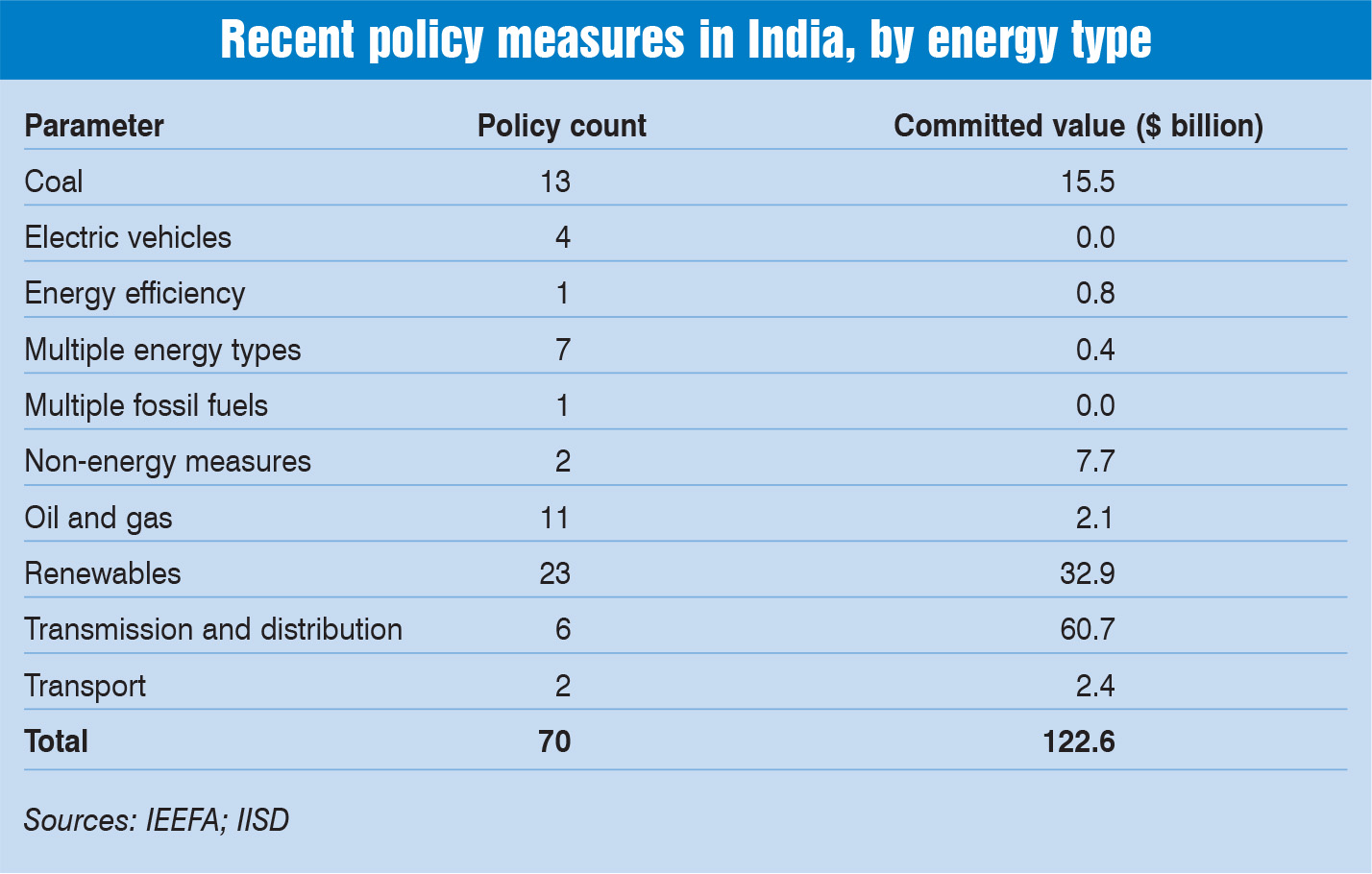 According to the report, roughly 22 per cent of the recently announced government commitments are focused on dealing with the Covid-19 crisis. Moreover, approximately half of the committed value is aimed at promoting energy security, while climate change and air pollution account for 25 per cent and 2 per cent shares respectively. The Indian government announced a Rs 20 trillion stimulus package in May 2020 for mitigating the adverse financial impact of the pandemic. This included various reforms to help revive the economy as well as support measures for the energy space. The most important of these support measures was a liquidity boost for discoms, which consisted of a Rs 900 billion bailout package. Discoms would get liquidity against receivables from state-owned Power Finance Corporation and Rural Electrification Corporation to help them pay their dues to power producers. Other recent support measures include waiver of interstate transmission charges for solar and wind power producers till June 2023, blanket extension of project commissioning timelines for renewable energy projects, revision of priority sector lending guidelines for renewables and reduction of domestic natural gas prices.

The government and the industry realised the importance of being self-reliant after facing supply chain issues during the initial part of the pandemic. Thus, a host of government measures were introduced to promote energy security and domestic manufacturing. These include the PLI scheme, commercial mining of coal, concessional loans for setting up of power projects, extension of the safeguard duty and imposition of basic customs duty on the import of solar cells and modules.

Overall, the policy interventions aim to revitalise the power sector, including renewables. However, much more needs to be done to ensure a green economic recovery. The report identifies six key action areas for a green stimulus in India for 2021. These are strengthening of the green industrial policy, investments in large-scale renewable energy grid integration, energy access improvement, compliance with environmental norms, improved targeting of subsidies, fossil fuel taxation and unlocking of finance.

Summing up, Covid-19 presents a huge opportunity to revamp the country’s economy through the promotion of greener and more sustainable energy options. This would not only enable the creation of more jobs and wealth and attract foreign investments in the country, but also address the serious concerns relating to climate change and energy security.