The power transmission segment in the country has witnessed steady growth over the past few years, driven mainly by the increasing power demand and generation capacity, especially in the renewables segment. A key driver for further expansion of the grid is the evacuation of power from the up­coming renewable energy projects. Pro­jects such as green energy corridors and a transmission system for renewable en­ergy zones are already under way to faci­litate the integration of renewable energy into the grid. On the technology front, high voltage direct current (HVDC) is gaining traction as it helps transmit electricity over long distances with minimal losses. Further, gas-insulated swit­ch­gear (GIS) substations and hybrid sub­stations are gaining prominence to address right-of-way (RoW) issues. Tra­n­s­mission utilities are transitioning to newer tower designs and structures such as mono­po­les and multicircuit towers, and adopting various digital and online tools for asset management and monitoring.

Power Grid Corporation of India Limited (Powergrid) continues to dominate the co­untry’s transmission sector with 170,724 ckt. km of lines and 451,351 MVA of substation capacity (as of Sep­t­em­­ber 2021). In recent years, private par­ticipation in the transmission seg­me­nt has increased significantly. The share of private players in terms of total line length increased from 3.3 per cent in 2011-12 to 7.6 per cent in 2020-21. Meanwhile, their share in terms of substation capacity increased from 0.5 per cent to 4.2 per cent.

In order to fast-track the development of the country’s transmission network, tariff-based competitive bidding (TBCB) was introduced in 2006. As of September 2021, 55 transmission projects (excluding cancelled and under-litigation projects) were awarded under TBCB. Of the­se, 36 projects have been commissioned while the remaining 19 are under construction. Further, of the awarded projects, 35 were secured by private pla­y­­ers, while 20 were won by Power­grid. The key private players in the transmission segment include Sterlite Power Tra­ns­mis­sion Limited and Adani Trans­mission Limited.

The transmission segment is set to grow in the coming years, driven mainly by the need to evacuate power from large-scale renewable energy projects. With the government’s target of setting up 175 GW of renewables by 2022 and 450 GW by 2030, transmission systems will requ­ire significant expansion and strengthening. Besides the changing energy generation mix, consumers are turning into prosumers as they are both consuming and producing electricity; and decentralised generation of energy is becoming popular. Together, they make the grid even more complex as it becomes the centre of both generation and consumption. In times to come, there will be a need to manage bidirectional flows and multiple feeding points. This makes green grids and green energy corridors (GECs) much more important.

In September 2021, the central government announced plans to offer 44 new transmission projects worth Rs 414 billion under the GEC programme through the TBCB bidding process. These projects will evacuate about 38 GW of renewable energy from the western and northern regions. The projects are a part of the central government’s flagship GEC programme, which aims to connect renewable energy zones (REZs) with the national grid. The major projects inclu­de the Rajasthan REZ, Gujarat (Khavda), sy­s­tem strengthening in north, system str­engthening in south, Gujarat (Dho­le­ra), Rajasthan (Neemuch), and Bhata­para augmentation.

Another growth driver for transmission infrastructure is the government’s focus on creating a regional power grid to uti­lise resources in the South Asian region in an optimal manner and stabilising the Indian grid in the wake of the increasing share of renewables. To realise the vision of a South Asian grid, there is a need to build new transmission networks and strengthen existing ones. The One Sun One World One Grid initiative envisions connecting all countries with solar energy supply across the Tropic of Cancer. In­dia plans to take a major leap towards building an intercontinental renewable energy transmission network.

The growing power demand also creates the need for transmission network ex­pansion. The per capita electricity consumption in India stood at 1,208 units in 2019-20, which is expected to reach 2,984 units by 2040. Further, the new for­ms of load, such as the charging of a lar­g­e number of electric vehicles, data centres and Indian Railways, which is un­dertaking an electrification drive, will be some of the other key drivers for the ex­pansion of the transmission network.

The demand will also come from the renovation and modernisation of sub-transmission networks. As per a Mi­nis­try of Power’s recent order, all 33 kV systems, which are currently mainta­ined by state distribution companies, will be brought under the state transmission utilities in a phased manner for better pla­nning, loss reduction and increased supply reliability. 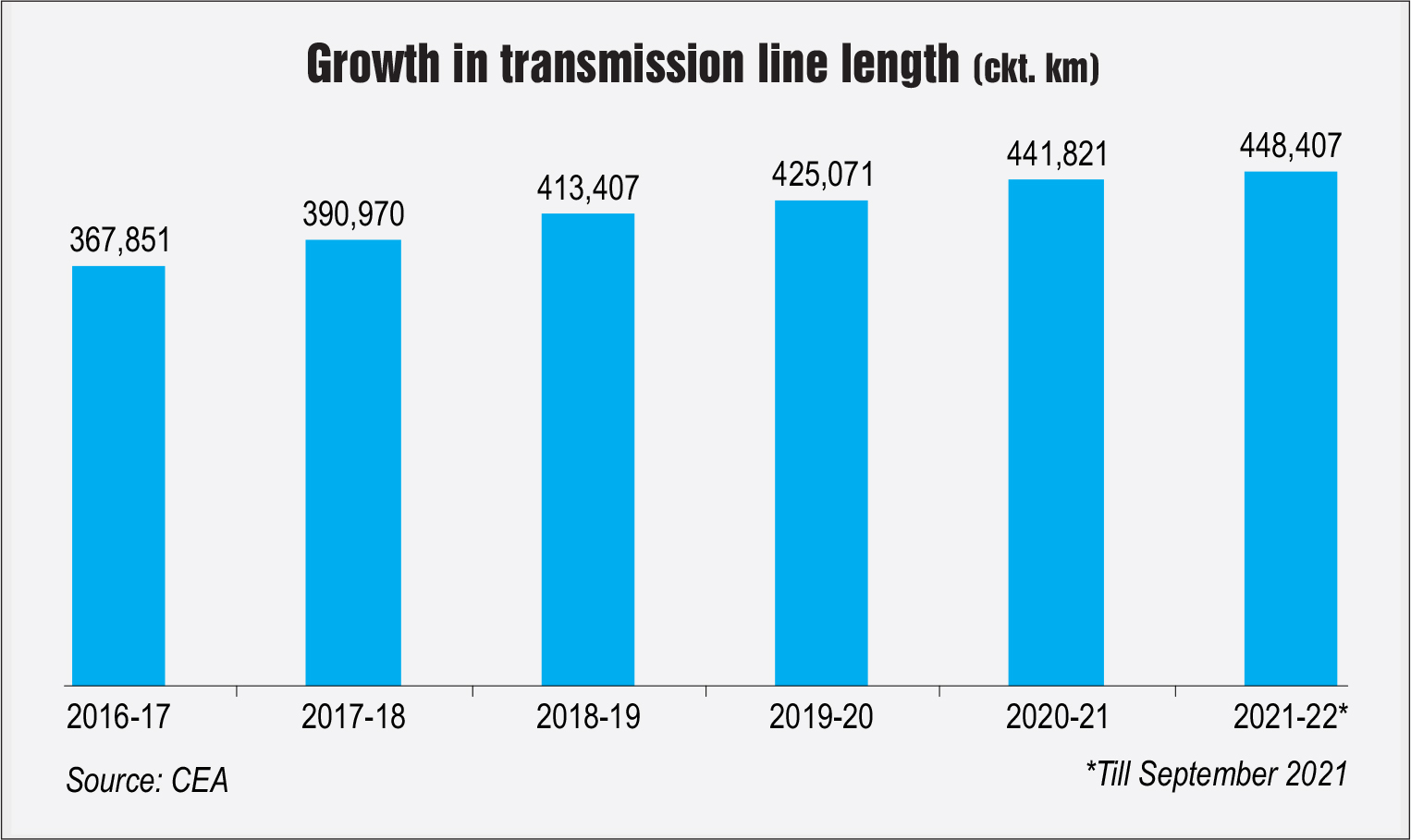 Powergrid has been installing mono­po­les since 2008-09 to save space and avoid the felling of trees. The utility rece­ntly commissioned the ±320 kV Pugalur (Tamil Nadu)-Thrissur (Kerala) voltage source converter-based high voltage direct current system with monopoles. Sterlite Power has used monopoles for up­rating the Mallapuram-Manjeri line from a 66 kV single-circuit to a 110 kV D/C for the Kerala State Electricity Boa­rd. The Gurgaon Palwal Transmis­sion project of the India Grid Trust has dep­loyed multicircuit monopole towers for transmission lines for space optimisation. As of 2020-21, Adani Transmis­sion Limited had two ERS sets in the central part and one ERS set in the western part of the country. More recently, during the 2021 Taukte cyclone, Powergrid used the ERS to set up 11 towers and constructed 10 new towers for restoring the 220 kV Timbdi-Dhokadva line, feeding power to the Union Territory of Diu.

Owing to time and space constraints, new and emerging technology solutions are being deployed for the construction and operation of transmission projects. Project developers are deploying LiDAR technology, drones and air cranes for the construction of transmission lines, and thermovision cameras and Android-bas­ed applications for operations and main­tenance. In order to enhance the avail­a­bility of the transmission network, utilities are deploying online asset monitoring tools. The state utilities are also making arrangements for remote ins­pec­tion and maintenance. For immediate fault detection and faster rectification, MAHATRANSCO has started using drones to carry out inspection and maintenance assessment of power lines in the state.

Several challenges need to be addressed to ensure that the grid expansion plans are on track. Due to the lack of harmonisation of policies and regulations across states, developers face issues in project development, particularly in securing RoW and obtaining environmental and forest clearances. While developers have taken steps to overcome RoW challenges by deploying advanced design and technology options for towers and transmission lines, advanced technological op­tions cannot be deployed across all projects. Apart from this, there are challen­ges related to the short gestation period of renewable energy plants vis-à-vis that of transmission projects.

To meet the future peak load and integrate huge renewable energy projects g­o­ing forward, huge investments will be required to strengthen and ramp up the co­untry’s transmission infrastructure. The National Infrastructure Pipe­line has es­timated a capital expenditure of ab­out Rs 3,040 billion for the power transmission segment between 2020 and 2025. State utilities are expected to lead the transmission segment with a pro­jected capex of Rs 1,900 billion. Hen­­ce, India mu­st shift its priority to strengthening its tr­a­nsmission infrastructure in order to en­­sure a smooth green energy transition.