Coal-based capacity remains the largest contributor to power generation in India with a share of 71 per cent in 2020-21, supported by a large coal reserve in the country. Despite the decline in its share over the years due to a shift in focus to renewables, coal-bas­ed generation has remained dominant in the generation mix over the medium term. The pitfall of the higher share of coal-based power generation is emission of pollutants such as sulphur oxide (SOx) and nitrogen oxide (NOx). In order to control the level of these emissions, the Ministry of Environment, Forest and Climate Change (MoEFCC) notified em­i­ssion norms for thermal power plants (TPPs) in December 2015.

In line with this, gencos have been chal­king out a number of strategies to ensure that their units comply with the new norms. They are deploying various emission control systems including flue gas desulphurisation (FGD), selective catalytic reduction (SCR), selective non-catalytic reduction (SNCR) and electrostatic precipitators (ESPs) so that their TPPs are able to meet the norms by the deadline. However, the overall progress in complying with these norms has been slow so far. Bringing much relief to de­velopers, the MoEFCC, in April 2021, no­ti­fied graded implementation of emission control measures based on the pla­nt’s location and an extension of one to three years in the implementation timeline. The government has also put in place a mechanism to penalise non-compliant TPPs beyond the revised ti­me­lines, by prescribing a graded penalty for each category of TPP.

The issue of emissions has gained pro­minence in light of India’s commitment to mitigating climate change and decarbonising the economy, reiterated recen­tly at the 26th Conference of Parties (COP26) in Glasgow, Scotland. India an­nounced a net-zero emissions target for 2070, backed by strong near-term goals to increase the reliance on renewables. Besides this, it has pledged to cut carbon emissions by 1 billion tonnes and also lower the emission intensity of its GDP by 45 per cent by 2030.

SOx emissions: To reduce SOx emissi­o­ns, flue gas desulphurisation (FGD) systems have been planned for 437 units, aggregating 167.7 GW in capacity. Accor­ding to the Central Electricity Authority (CEA), as of October 2021, FGD systems have been commissioned and are operational in six units aggregating 2,160 MW in capacity – four units of NTPC’s Dadri project (4×210 MW) and two units at CLP India’s Haryana project (2×660 MW). This is a mere 1 per cent of the total identified FGD system capacity to be commissioned.  Meanwhile, bids ha­ve been awarded for 157 units aggre­ga­ting 69,260 MW in capacity. This represents 41.3 per cent of the total planned capacity. Sector-wise, bids have been awarded for 114 units in the central sector, 31 units in the private sector and 12 units in the state sector, representing 87 per cent, 29 per cent and 8 per cent of the total planned capacity, respectively. Apart from this, a notice inviting tender has been issued for 132,167 MW of capacity or 325 units.

Recent orders placed for FGD include Thermax Limited bagging a Rs 8.30 billion order from an Indian private sector company. The order involves the setting up of FGD systems at three units of 660 MW capacity each in Uttar Pradesh, with expected completion in 36 months. Ear­li­er, in July 2021, Ducon In­fratech­no­logi­es secured a second order for FGD package from NTPC for latter’s Muzaffarpur TPP, Stage – II (2 x 195 MW), in Bihar. The first being Bara­uni TPP, Stage II (2 x 250 MW), Barauni, in Bihar.

NOx emissions: Regarding NOx emissions from TPPs, an important development took place last year when the Sup­reme Court allowed power stations commissioned between December 2003 and 2016 to emit 450 mg per Nm3 of NOx as against a cap of 300 mg per Nm3 earlier. The Ministry of Power (MoP) had propo­sed this revision because meeting the ear­lier limit was not possible for TPPs ope­rating at partial load. At present, various NOx control technologies are available such as SCR and SNCR systems, over fire air systems and low NOx burners. With the change in NOx limits, TPPs commissioned between 2003 and 2016 will not be required to implement ad­va­n­ce de-NOx technologies such as SCR or SNCR as a NOx emission level of 450 mg per Nm3 can be achieved by combustion modification.

Particulate matter (PM) emissions: For the control of PM emissions, most TPPs have already installed ESPs since Indian coal has a high ash content. However, upgraded systems could be required for the existing projects. In addition, the en­vironment ministry’s decision to do away with coal washing makes it more important for TPPs to invest in efficient PM control technologies. As of June 2021, ESP implementation plans are available for 222 units aggregating 64.5 GW in capacity. 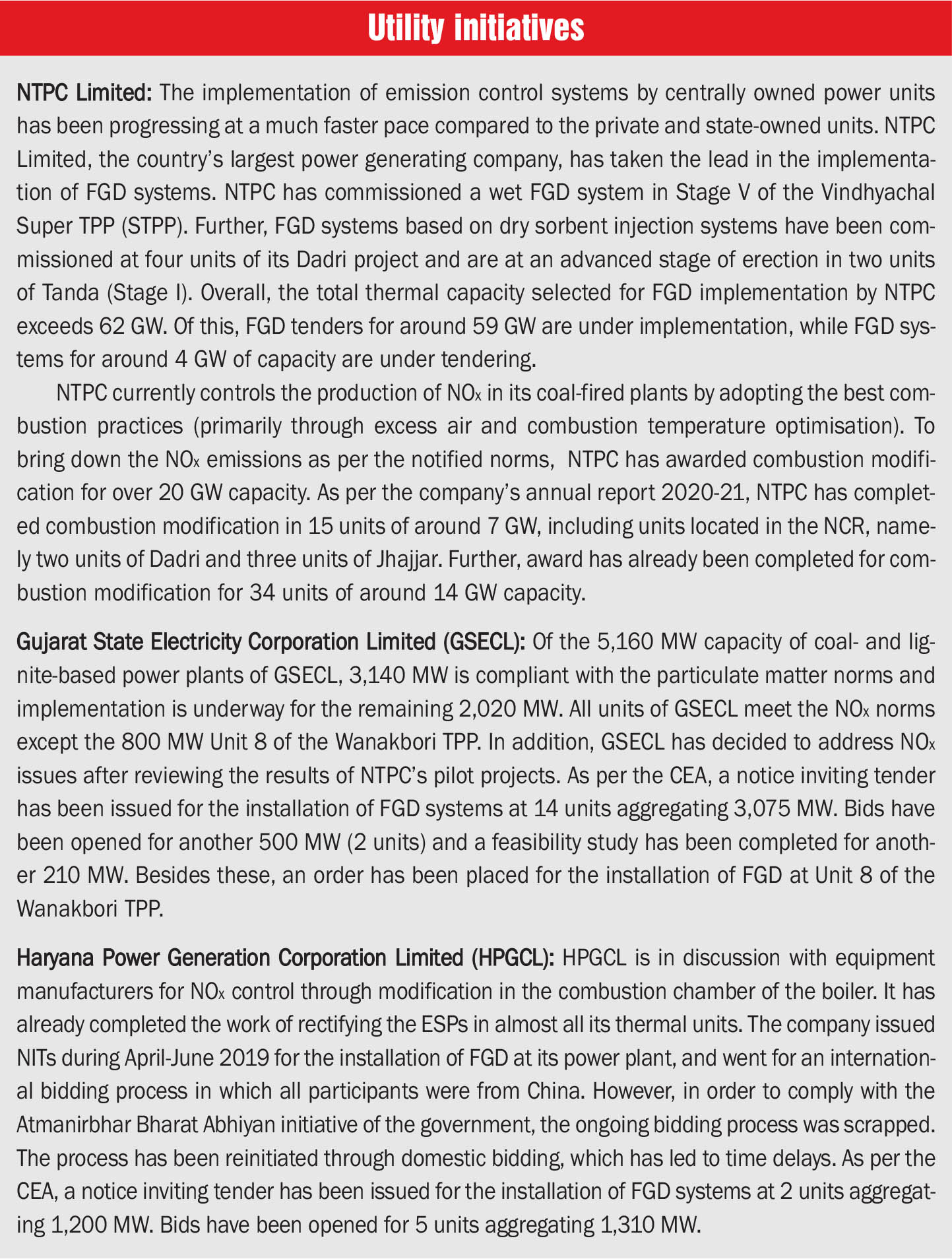 Revised timelines: In April 2021, the MoEFCC extended the timelines for complying with the emission norms for coal-based TPPs by one to three years. As per the Environment (Protection) Am­­end­ment Rules, 2021, power stations will be divided into three categories. Category A will comprise TPPs within a 10 km radius of the NCR or ci­ties that have a million-plus population, and would be required to meet the emission norms by December 2022. Category B will comprise TPPs within a 10 km radius of critically polluted areas or non-attainment cities, which would have to meet the norms by December 2023. Category C would be made up of all other plants, which have been given an extension till December 2024. TPPs declared to retire before December 31, 2025 are not re­qu­ir­ed to meet the specified norms in case such plants submit an undertaking to the Central Pollution Control Board and the Central Electri­city Authority for ex­emption on ground of retirement. Such plants will be char­g­ed environment compensation at the rate of Re 0.20 per unit of electricity ge­nerated if they continue to operate be­yo­nd the date specified in the undertaking. In addition to the extension of timelines, the new rules will levy an en­vi­ronment penalty on non-retiring TPPs for non-compliant operation be­yond the specified timeline. The maxi­mum fine for not complying with the norms by the deadline is Re 0.20 per unit for plants in Category A, Re 0.15 per unit for plants in Category B, and Re 0.10 per unit for plants in Category C.

COP26: At the COP26 summit, India reiterated its commitment to mitigate climate change and decarbonise its economy. The country has set a target to augment non-fossil fuel electric capacity to 500 GW and meet 50 per cent of its energy requirements from renewables by 2030. Besides this, it has pledged to cut carbon emissions by 1 billion tonnes by 2030, setting for the first time a target in terms of absolute emission cuts. It has also committed to lower the emissions intensity of its GDP by 45 per cent by 2030. It announced a net-zero emissions target for 2070, joining over 125 count­ri­es that have committed to net-zero em­issions. India is the fourth-lar­gest emitter of carbon emissions, after China, the US and the EU. Although the 2070 net-zero target falls behind the 2050 commitment made by the US and Europe, and the 2060 commitment ma­de by Chi­na and Saudi Arabia, it is a significant target for a developing nation. Notably, the new targets are an upgrade from In­dia’s previous Intended Natio­nally De­ter­mined Contributions to the UNFCC, wherein it had committed to re­duce the emissions intensity of its GDP by 33-35 per cent over the 2005 levels and achieve about 40 per cent electric power capacity from non-fossil fuels by 2030. 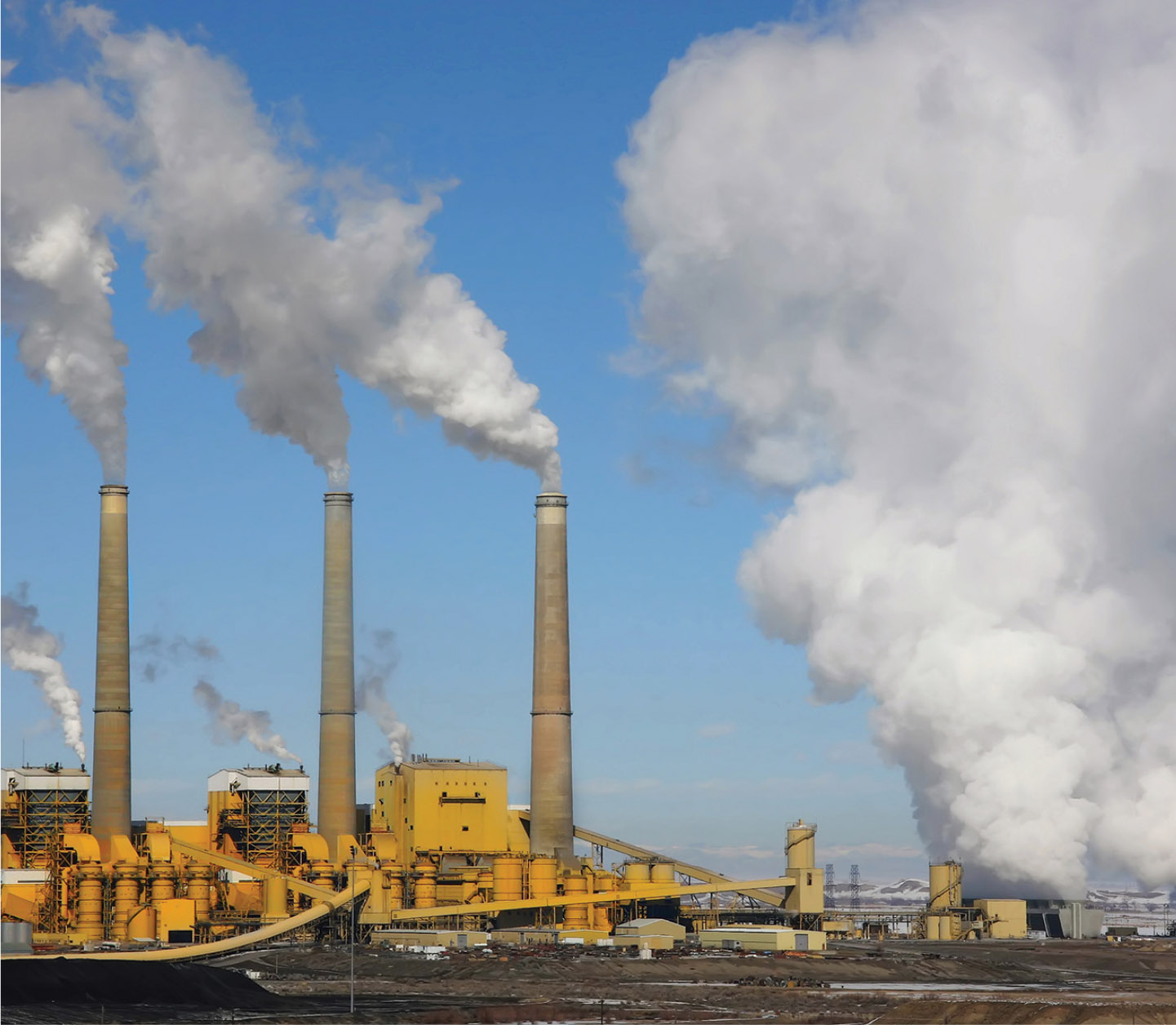 From a developer’s perspective, one of the major issues in the implementation of emission control systems is the un­certainty regarding full recovery of additional capital and operational expenditure to be incurred on the equipment. The Central Electricity Regulatory Com­mission released a staff paper in Sep­tem­ber 2020 wherein it proposed a me­chanism to recover the cost incurred to comply with the revised emission norms under the change in law provision. How­ever, the tariff compensation ass­um­es the period of recovery of the costs as 25 years, which will adversely impact the returns for developers with plants having balance useful life of less than 25 years. Apart from this, there is no clarity on the mechanism for the recovery of FGD-related costs for projects that sell power through the short-term market.

Another challenge in the implementation of emission control equipment lies in securing debt financing for projects that do not have long-term power purchase agreements (PPAs), for projects that have unviable tariffs as per their PPAs, or those that have a remaining PPA tenor of less than 12 years. As per in-dustry estimates, an operational private thermal capacity of around 20 GW does not yet have long-term PPAs.

Other issues are the long time taken by regulators to process petitions, possible downgrade in merit order dispatch, im­port restrictions, and inadequate do-mestic technology and capacity to meet the demand for emission control equipment. More pronounced are the space constraints faced by around 72 GW of capacity (mostly by units greater than 500 MW) for installing emission control equipment.

To conclude, the extension of the timeline provided by the MoEFCC has come as a relief for thermal independent po­wer producers amid the sluggish prog­ress in compliance with the revised emi­s­sion norms. However, it is important that there is no further slippage in the im­plementation timelines and penalties are strictly imposed for non-compliance beyond the timeline. Besides, it is essential to expedite a transparent and well-defined compensation mechanism to en­sure recovery of implementation cos­ts through tariffs.

Can the revised environmental norms for thermal power plants be a catalyst for the growth of the equipment industry? Industry observers say the answer is yes. The power equipment industry has been hit hard in […]

The Indian boiler, turbine and generator (BTG) industry has been grappling with the challenges of under-utilisation of manufacturing capacity and a shrinking order pipeline from thermal power plants (TPPs) in view of the shifting focus of […]