India’s renewable energy capacity has grown by leaps and bounds and cro­s­s­ed the massive 100 GW milestone this year. Over 8 GW of capacity has been added during April-November 2021 despite the devastating second wave of the Covid-19 pandemic, with more capacity addition on the way. Fur­ther, the competitive price of power generated from renewable energy sources, coupled with supportive market dynamics, has led to continued investments by both domestic as well as foreign inves­tors. Enabling policy and regulatory measures at the federal level as well as favourable cost economics have also encouraged commercial and industrial (C&I) consumers to take advantage of renewable energy sources to meet their electricity demand. With the larger goal of decarbonisation and net zero in mind, C&I consumers are increasingly entering into corporate power purchase agreements (PPAs), which are contracts between a corporate buyer and a renewable power generator to purchase electricity at a pre-agreed price and duration. As per a recent report by Wood Ma­ckenzie, the Asia-Pacific market is starting to play a bigger role with 10.9 GW of cumulative capacity procured un­til the first half of 2021 through corporate PPAs. Currently, India leads the Asia-Pa­cific’s corporate renewable procurement market, with a cumulative procurement capacity of 5.2 GW.

Renewable energy uptake by C&I co­n­sumers is largely driven by the falling generation cost of renewable power, ma­inly solar, and increasing grid power tariffs. The grid power tariff for C&I consu­mers in many states is nearly Rs 10 per unit, while the levellised cost of power th­rou­gh rooftop solar (with a battery storage facility) comes to around Rs 6-Rs 7 per unit, offering a clear cost advantage. In contrast, the cost of power generated by diesel gensets hovers at over Rs 20 per unit, owing to the high cost of fuel. Given that energy costs account for 30-40 per cent of the total operational expenditure of C&I consumers, significant savings can be realised via renewable energy procu­rement under third-party corporate PPAs, both captive and group captive.

Further, corporate establishments are so­urcing solar power as part of their gr­e­en strategies to attract customers as well as investors. Nowadays, investment banks and asset managers across the world consider environment, social and governance (ESG) as a key criterion for lending to businesses. Banks and private equity (PE) players are shying away from financing climate-unfriendly businesses. For instance, in early 2020, global PE major BlackRock, which has stakes in va­rious Indian companies such as Coal India Limited, NTPC Limited, Adani Po­w­­er, Torrent Power, Tata Power and CESC Limited, announced plans to exit companies that earn over 25 per cent of the­ir revenues from coal-related busine­sses including power plants.

Consequently, more and more Indian companies are announcing net zero targets and the trend is only expected to gain momentum as the country has re­cently announced its goal to achieve net zero carbon emissions by 2070 at COP26 in Glasgow. Major Indian companies such as Reliance Industries Limited (RIL), Tata Con­sul­tancy Services, HDFC Bank, Wipro, Info­sys, Mahindra & Mahindra, JSW Energy, ITC, Adani, Dalmia Cement and Indian Railways (IR) have announ­ced net zero targets. IR aims to reach net zero by 2030, RIL’s goal is to become net carbon zero by 2035, the Mahindra Gro­up and Wipro have set 2040 as the target year. In addition, 64 In­dian companies have committed to reducing greenhouse gas emissions, according to the Science Ba­sed Target initiative, a global alliance that helps businesses to establish their own climate targets.

Notably, sellers also prefer contracts with C&I consumers as they are assured of payments and they get better tariffs from these PPAs than the ones they win in auctions. Regulatory interventions with attractive business models such as re­­newable energy service company (RESCO), captive and group captive ha­ve further promoted the growth. The­re­fore, major industries, large corporates and ev­en institutions such as met­ro ra­ils, airpo­rts and railways are increa­singly swit­ch­ing to solar and specialised independent power producers (IPPs) that service only the C&I market and are fast expanding their portfolios. This mo­me­n­­tum is likely to continue due to the la­rgely untapped po­tential, especially in the C&I solar space. 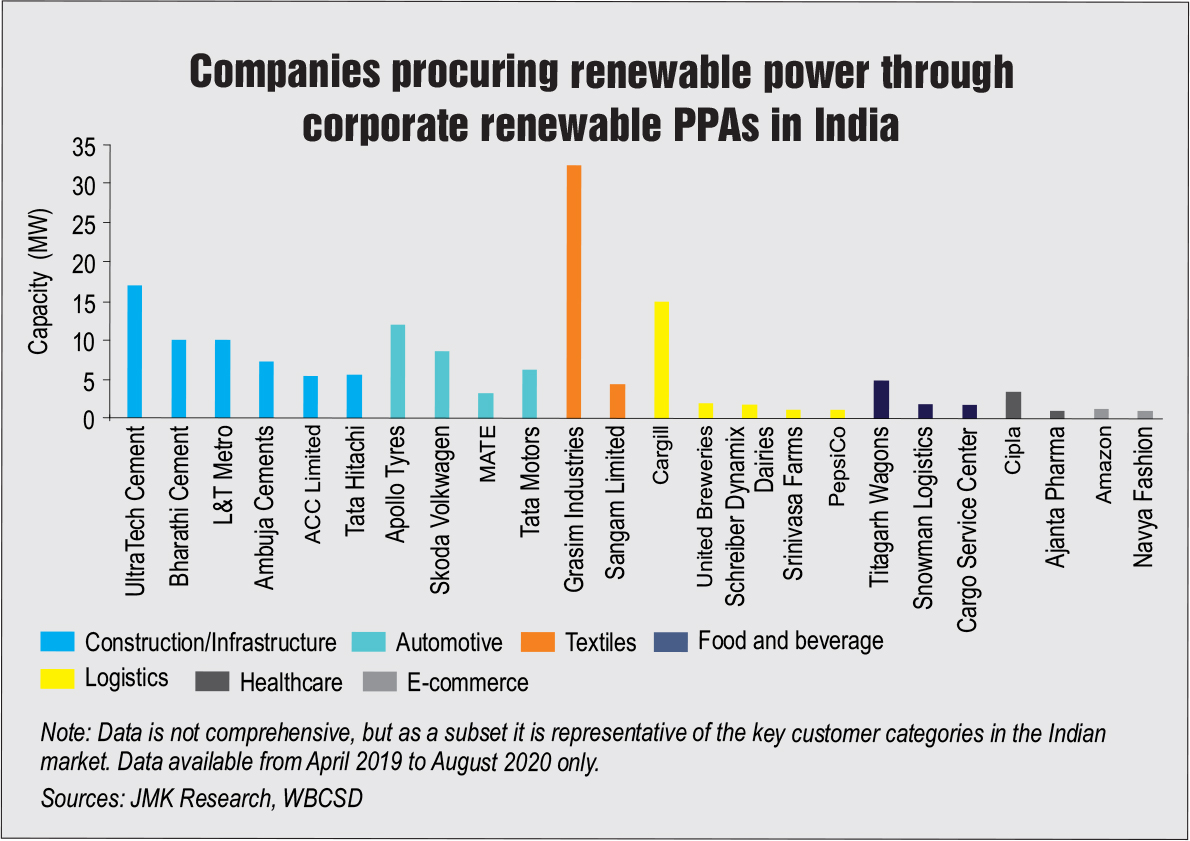 At present, rooftop solar is the most preferred technology by C&I consumers. Re­newable developers are exploring combined solar and wind hybrid projects due to supportive government po­li­cies and waivers on open access char­ges for such projects. Hybrid projects of­f­er benefits of reduced risk due to lower generation variability of the combined technologies and better utilisation of the transmission infrastructure. Notably, Andhra Pradesh, Gujarat and Rajasthan have introduced policies for hybrid projects. The total capacity issued in tenders for hybrid systems in the country currently stands at 12.33 GW, with 6.26 GW of this capacity having been allocated.

As per the Corporate Renewable PPAs in India: Market & Policy Update Report (Ja­nuary 2021) by the World Business Council for Sustainable Development (WBCSD), rooftop PPA projects made up nearly 32 per cent (1,851 MW) of the cu­mulative on-site solar installations in India, as of June 2020. Under the rooftop PPA model, a RESCO fund builds and maintains a rooftop or on-site solar po­wer plant, while the end-consumer pays an agreed tariff for a fixed period, typically 12-15 years. Unlike open access models, growth in rooftop PPAs is more secular. Of the total rooftop market, the proportion of the rooftop PPA market increased from 13 per cent in 2016 to 39 per cent in 2020, although the rooftop capex model still accounted for a major share of 61 per cent. Under the capex model, a C&I consumer requires own ca­pital expenditure for setting up the solar power plant, that is, the customer hol­ds ownership of the asset. PPA tariffs for projects installed under the rooftop PPA model have also declined, in line with decreasing solar module prices. The tariffs for rooftop PPAs declined from Rs 5.50 to Rs 5 per unit in 2017 to Rs 4 to Rs 3.50 per unit in 2020. In the past, many large companies in the fast-moving consumer goods segment as well as multinational companies pre­ferred the capex model, but post-Co­vid-19 liquidity issues might push them towards the rooftop PPA model.

A shift has also been seen from traditional open access and third-party po­wer procurement to the group captive model. This is mainly due to the withdrawal of open access waivers for new third-party PPAs across multiple states unlike group captive projects, which continue to enjoy a complete waiver of cross-subsidy surcharge and additional surcharge. This trend is likely to continue with more consumers and IPPs opting for group captive models to minimise risks and improve their financials. 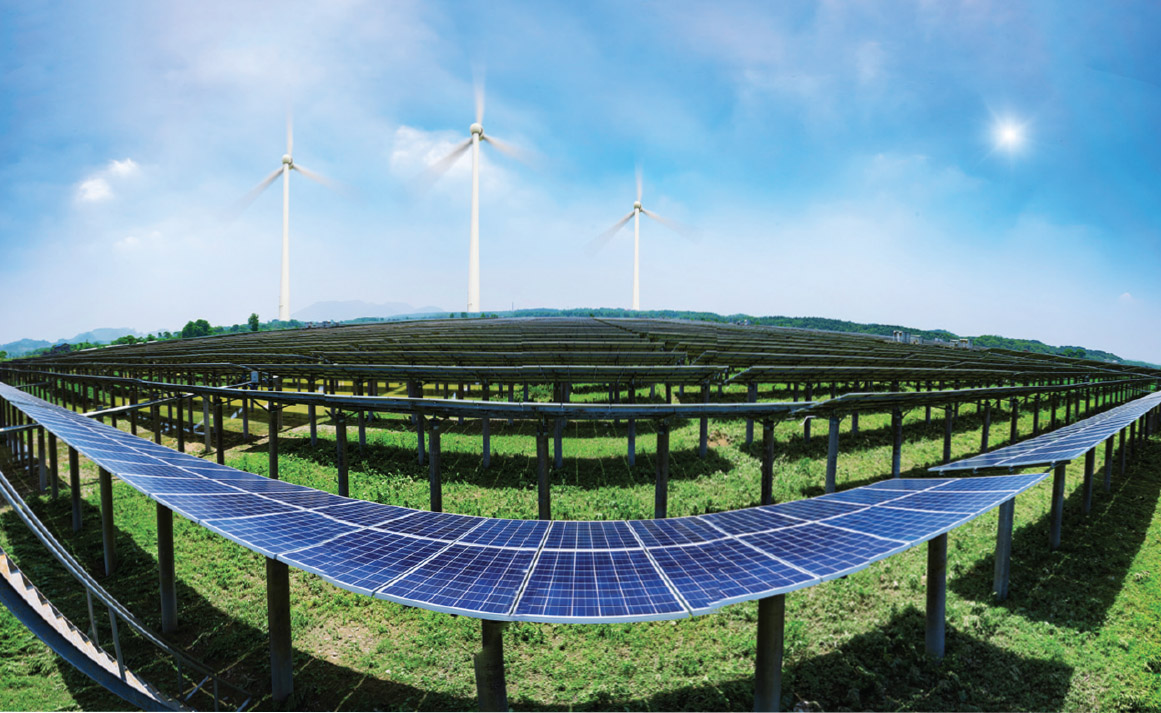 While central policies are amenable to renewable energy uptake by C&I consu­mers, there are regulatory hurdles at the state level that hamper renewables procurement by consumers of this segment. At the central level, the Ministry of Power notified an amendment to the Electricity (Rights of Consumers) Rules, 2020 in June 2021 related to net metering for rooftop solar installations. As per the amendme­nt, net metering can be set up by a prosumer for loads of up to 500 kW or up to the sanctioned load, which­ever is lo­wer. For loads beyond 500 kW, gross me­tering must be used. There is also a gre­a­ter focus on green hydrogen, which is pro­duced from renewable energy. The Minis­try of New and Renewable Energy has circulated a draft cabinet note for ma­ndating a green hydrogen consumption obligation for the fertiliser and pe­troleum refining industries for the period 2023-24 to 2029-30. The move is likely to push these industries towards greater renewable energy uptake in operations.

Also, in October 2021, the po­wer minister launched the green day-ahead market (DAM) at the power ex­ch­anges. This is expected to provide competitive price signals, besides offering an opportunity to the market participants to trade in green energy, in the most tra­nsparent, flexible, competitive and efficient manner. The market-based com­pe­titive pri­ces will provide another op­tion to rene­wable generators to sell po­wer as well as allow obligated entities (distribution li­censees, open access consumers and cap­tive power consumers) to meet the re­newable purchase obligation target by directly buying green po­wer from the po­wer exchanges. Non-obligated entiti­es will be able to buy po­wer on a voluntary basis and help in inc­reasing the sha­re of green power.

Meanwhile, at the state level, withdrawal of open access charge waivers by various governments has negatively impacted market sentiment. For instance, Gujarat and Maharashtra withdrew wai­v­ers from open access consumers in 2020. In addition, in January 2020, Ma­ha­rashtra proposed grid support char­ges (GSC), a new levy for electricity consumers that have a sanctioned load above 10 kW for rooftop solar. The state discom sought a steep GSC of Rs 8.66 per unit while the total handling cost of electricity is roughly about Re 0.70 per unit. Although the proposal did not get a go-ahead from the state regulator, such moves create much ambiguity amongst developers and consumers alike.

The WBCSD report notes that state electricity regulatory commissions (SERCs) are restricting banking of renewable power in many renewable resource-rich states by moving from annual banking to monthly banking periods. Solar resour­ce-rich states such as Gujarat and Maha­ra­shtra, which often have surplus generation, have already moved to monthly banking for third-party sale of renewable power. This is bound to affect the viability of renewable electricity projects. In addition, Rajasthan, Andhra Pra­desh and Madhya Pradesh have completely withdrawn the banking provision for renewable projects, while Karnataka is plann­ing to restrict it to a 15-minute period. Further, states su­ch as Maha­ra­shtra, Gu­jarat, Madhya Pradesh, Karna­taka and Haryana have third-party open access charges that are higher than discom tariffs. This makes third-party sale unviable in these states. However, states such as Gujarat, Rajasthan, Andhra Pradesh, Od­i­sha, Uttar Pradesh, Chha­ttis­garh, Kar­nataka and Tamil Nadu have third-party sale charges lower than the grid tariff, but still higher than the group captive model. This deters large corporate buyers from opting for the third-party sale model and moving towards group captive models.

Going forward, the renewable energy up­take trend among C&I consumers is ex­pe­cted to grow as corporates an­nounce net zero targets in order to mitigate climate change concerns. How­ever, if India has to achieve the target of meeting 50 per cent of its energy re­q­uirements from renewable energy by 2030, states need to come forward and streamline po­licy and regulatory frameworks to encou­rage greater renewable energy procurement by C&I consumers. Currently, the fragile financial health of discoms pushes states to impose high open access char­ges, given that C&I co­n­sumers are the hi­ghest revenue accruing category of consumers for discoms. However, despite challen­ges, C&I consumers and corporates are likely to shift more and more towards re­newables, driven mainly by carbon neutrality ambitions as well as favourable pro­ject economics.

Interview with Mahesh Palashikar: “India is emerging as the most attractive energy market”

REC Market Update: Uncertainty continues even as stocks pile up

In an attempt to address the issue of the pile-up of renewable energy certificates (RECs) and introduce more realistic prices, the Central Electricity Regulatory Commission (CERC) issued new forbearance and floor prices for RECs in […]

For this very special issue, we wanted to identify and highlight sector achievements and failures over the past 25 years as well as the changes and challenges to expect over the next 25 years. We […]