The power distribution segment continues to be the Achilles heel of the po­wer sector, adversely impacting the viability of the entire value chain. In the past couple of months, the outstanding discom dues to power generators have again crossed the Rs 1 trillion mark. The dues to independent power producers (IPPs) and green power generators have increased by around 10 per cent du­ring this time. A number of schemes and reforms that had been launched in the distribution segment in the past have seen limited headway and have failed to improve the overall financial and operational performance of discoms.

Trends in discom dues and finances

In January 2022, the discom dues to power generators hit a 12-month high to reach Rs 1,062.03 billion (excluding the disputed amount). Nearly 52 per cent of the outstanding amount (Rs 553.48 billion) is due to IPPs, which are not covered under the central govern­me­nt’s payment security mechanism. The discoms have an overdue amount of Rs 265.4 billion to Adani Power, follo­wed by Rs 49.66 billion to Lalitpur Po­wer Gene­ration Company Limited and Rs 34.25 billion to IL&FS Tamil Nadu Power Com­pany Li­mi­ted, among others. Discom overdues are also adversely impacting the financial position of re­newable en­ergy generators. Around 18 per cent of the out­standing discom dues (Rs 197.32 billion) are towards re­ne­wable energy ge­ne­ra­tors, with the highest overdue am­ount payable to Adani Green Energy Li­mi­ted (Rs 21.29 billion), followed by Hero Future Energies Pri­vate Limited (Rs 14.2 billion) and Tata Power Com­pany Limi­ted (Rs 10.28 billion), among others.

The dues have swelled despite measures such as the liquidity infusion scheme as a part of the Aatmanirbhar Bharat Abhi­yan. To recall, the scheme was launched in 2020 to help discoms clear their outstanding dues to power gencos and stay afloat during the Covid-19 pandemic out­break. The Rs 900 billion liquidity package for discoms, to help them pay their dues till March 2020, was later en­hanced to Rs 1,250 billion till June 30, 2020, factoring in these utilities’ outstanding dues, and further to Rs 1,350 billion. To lend further support to the discoms, the government had waived penal charges for the late payment of dues.

However, industry experts opine that even though power demand picked up as the economy started recovering post the second Covid wave, the lack of re­forms at the state level for improving the financial parameters of state discoms prevented discoms from clearing their dues to generators.

Rahul Raizada, executive director, Power and Utilities, PwC, explains, “The recent months have seen a bit of a trend reversal as far as discom dues are concerned, especially for IPPs, which are not protected by the payment security mechanism. The past two years of the pande­mic have forced the state governments to spend extensively in the social sector, which was the need of the hour. How­ever, a sluggish economy (which has pi­ck­ed up only in recent months) has im­pacted their revenue generation, thereby curtailing their ability to support ot­her sectors, particularly the po­wer sector, which forms a significant part of any state budget. This can be se­en in the outstanding subsidy to the dis­co­ms, whi­ch has increased by 40 per cent al­ready in the current year. Second, the quality of revenue for the discoms has been deteriorating, which essentia­lly means that the revenue from the subsidised category of consumers has declined by over 9 per cent (from 49 per cent to less than 41 per cent of the overall sales for major states) over the past two years, while revenue from the subsidised category has largely remained constant. Finally, the ACS-ARR gap of discoms has increased from Re 0.28 per kWh to Re 0.41 per kWh over the past six quarters, indicating that revenue realisations on account of either tariff revisions or loss reductions have not kept pace with the increase in costs.” 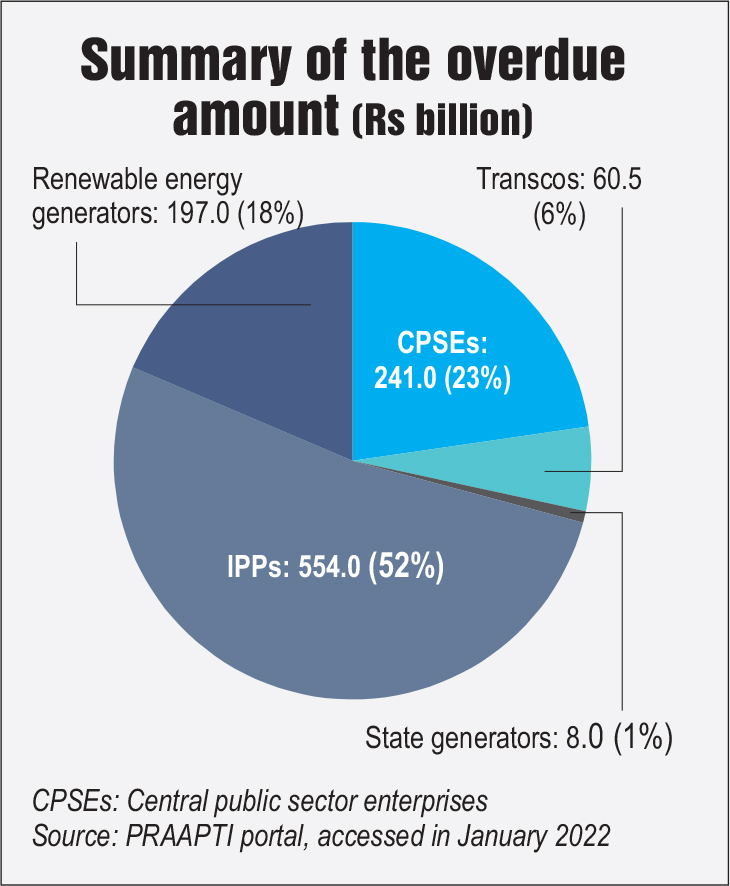 The operational and financial performance of power distribution utilities also continues to remain poor. The all-In­dia aggregate technical and commercial (AT&C) losses during 2019-20 stood at 21.83 per cent, varying widely across sta­tes. Meanwhile, during 2019-20, discom losses stood at a high of Rs 393 billion, although these had improved by 36 per cent from Rs 614 billion in the previous year. Power distribution companies have a huge backlog of pending subsidy pay­outs by the state governments. Re­po­r­tedly, as of June 2021, the states had not cleared subsidies worth Rs 607.43 billion meant for consumer categories consisting of households and farmers and rou­ted through the discoms. Also adding to the woes of the discoms are the unpaid dues of government departments (civic bodies and other such institutions) aggregating around Rs 970.88 billion as of June 2021. Even if most of the loans to dis­coms are given against state guarantees, the present trend of increasing the un­­paid government dues and subsidy arrears will make the repayment of debt non-feasible in case of defaults.

Reportedly, the power ministry has urged banks to exercise caution while lending to state distribution utilities and follow the prudential checks introduced by the Po­wer Finance Corpo­ra­tion and REC Limited before sanctioning loans. This is the first time that the centre has warned banks, expressing concern over the financial position of discoms and its potentially adverse impact on the banking system. 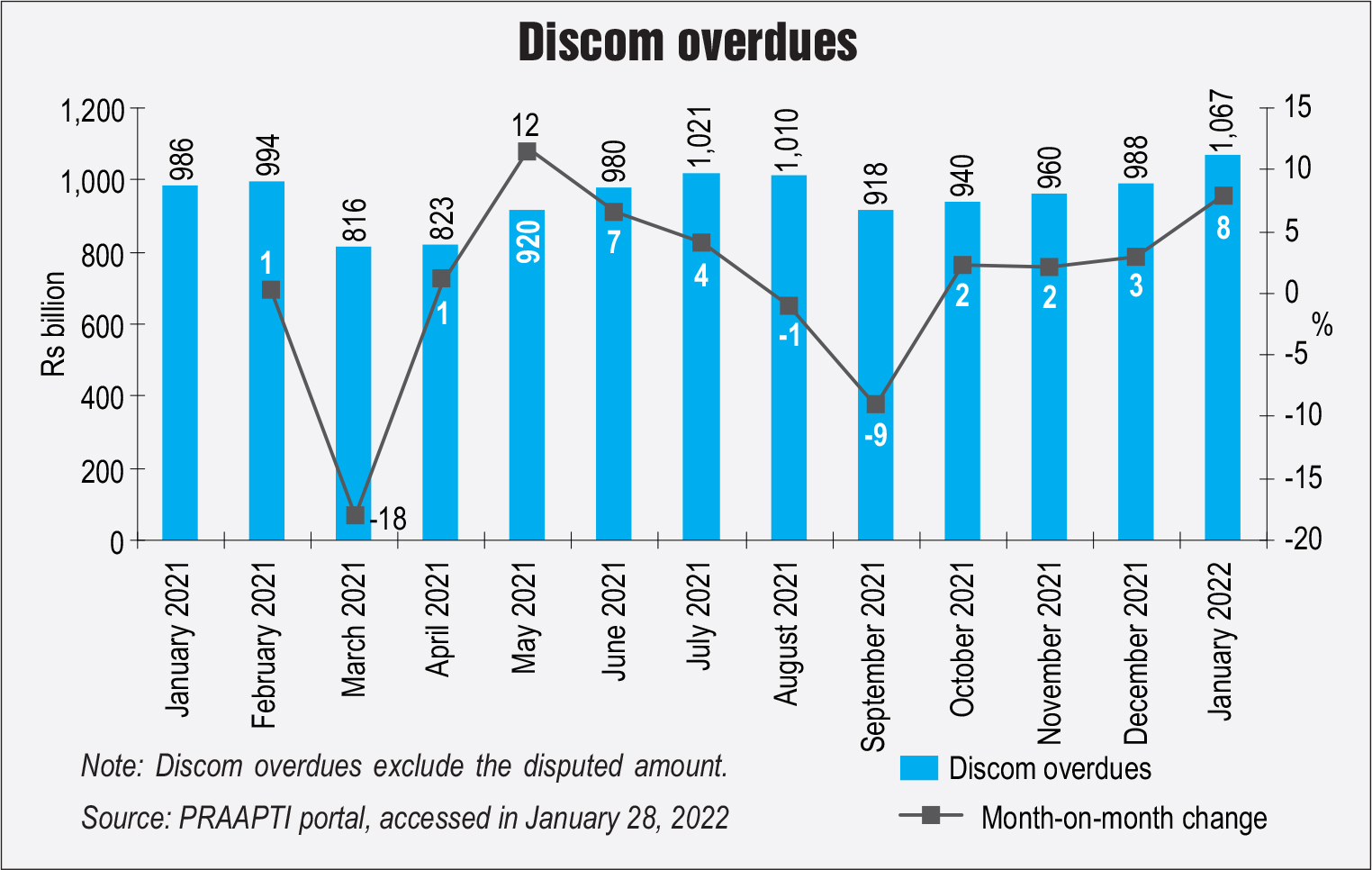 Also, to set the record straight, one of the key measures has been the launch of the Rs 3.03 trillion Revamped Distribution Sector Scheme (RDSS), the biggest ever reforms package for the power distribution segment in 2021. Unlike previous reform packages, the RDSS focuses on the implementation of state-specific action plans rather than a “one-size-fits-all” approach. The assistance under the scheme is reforms linked and is based on meeting pre-qualifying criteria and ac­hieving  performance benchmarks. The scheme aims to improve the oper­ational efficiency and financial sustainability of the discoms through reform me­asures such as 100 per cent system metering, smart prepaid metering, energy accounting, infrastructure works for loss reduction, modernisation and system augmentation. In terms of progress, the northeastern states of As­sam and Meghalaya have been frontrunners in plan­ning operational and financial re­forms under the scheme. Their state-level Distribution Reforms Com­mittee and the state cabinet have app­roved the action plan and the DPR for implementing RDSS.

Notably, as part of the reform measures, the central government is incentivising the states that are committing to sector reforms by offering increased market borrowings. In June 2021, the finance mi­nistry launched a programme to al­low additional borrowing space to the state governments, which is conditional on them undertaking and sustaining specific reforms. The additional borrowing limit permitted for power sector reforms is 0.5 per cent of the gross state domestic product (GSDP). Almost 20 states have shown interest in availing of the benefit under the scheme during 2021-22. Based on the recommenda­ti­o­ns of the power ministry, Andhra Pra­desh has received approval for borrowings of over Rs 21 billion by the finance ministry, to partly utilise its additional borrowing space. Meanwhile, the proposals of Manipur and Rajasthan are under active consideration for additional borrowings, and several other states are at advanced stages of submitting the­ir proposals. This being the first year of the current version of the scheme, the requirements of reforms and actions have been kept to a minimum and the bar raised for future years.

To recall, even during 2020-21, a slightly different version of the scheme was made applicable, under which 24 states availed of additional borrowing limits of over Rs 130 billion. A number of provisions in the scheme remain common with the RDSS. These are timely publi­shing of annual accounts, filing of tariff petitions, issu­ance of tariff orders, unit-wise subsidy accounting, publishing of energy accounts, adoption of newer innovative technologies, etc.

The government is planning to focus on discom privatisation and competition in distribution in order to help improve the situation. Under the Aatmanirbhar Bha­rat Abhiyan, the central government had announced plans to privatise the power distribution business in union territories (UTs) and, based on the learnings thereof, expand the privatisation of distribution. However, the discoms’ privatisation drive in the UTs has seen limited success so far, with some progress being seen in only Dadra & Nagar Haveli and Chandi­garh. Meanwhile, last month, the electricity department of the UT of Laksha­dweep invited bids to privatise its power distribution business. Privat­i­sa­tion holds big promise for the sector, and is expected to not only make it more consumer-friendly, but also strengthen the financial health of the discoms. What also promises to fix the sector is the government’s ambitious targets for smart metering under the RDSS. The implementation of smart prepaid me­tering and new-age digital technologies under the RDSS is expected to significa­n­tly improve discom performance.

The revival of the power distribution segment is contingent on the on-ground implementation of the reform measures in­troduced under government schemes and programmes. The burgeoning discom dues and poor discom finances ha­ve significant repercussions and if the is­sue remains unaddressed, it could pose hurdles in meeting the government’s clean energy targets of 500 GW by 2030, as well as dent investor confidence go­ing forward.

By R.V. Shahi, Former Power Secretary, Government of India  The prime minister’s resolve and call to the nation for achieving self-reli­ance in all sectors of the economy is not only a national need and imperative for […]

Paying Up: MoP considers a penalty for unwarranted load shedding

Reiterating the government’s commitment to providing 24×7 power supply by March 2019, the power minister, in a recent announcement, stated that appropriate legislation will be enacted to penalise discoms if they indulge in unjustified load […]