Weather-related information is essential for day-to-day energy management as well as planning and maintenance of generation, transmission and distribution assets. Extreme events such as cyclones, floods and thunderstorms often have severe consequences for the electrical grid, such as supply disruptions for long durations and huge expenditure on restoration activities. To mitigate the impact of risks associated with weather and climate conditions, reliable weather forecasts are needed, which can reduce the uncertainty in supply and demand forecasts to a large extent. Accurate forecasting has become even more important with the increasing penetration of renewable energy sources into the grid. These are intrinsically intermittent in nature and highly dependent on weather conditions.

Recently, the Indian Meteorological De­partment (IMD) and Power System Ope­ration Corporation Limited (POSOCO) released a report titled “Use of Weather Information for Secure, Relia­ble and Economic Operation of Indian Grid”, which focuses on the advantages of prior weather information for reliable, secure and economic operation of the power system.

A look at the key takeaways from the re­port on the impact of weather conditions on the power system, and the utilisation of weather forecast data for secure and reliable grid operations…

Impact of weather on the power system

Temperature and humidity are essential meteorological variables, which directly affect electricity demand. In general, electricity demand in the summer/monsoon season is very high compared to the winter season. In addition to this, several states in northern and eastern In­dia also experience severe thunderstorms and dust storms with strong win­ds and lightning, leading to load crashes due to the sudden drop in temperatures and tripping/opening of distribution feeders, which, in turn, result in high voltages in the northern grid. The effec­ts of thunderstorms are short and temporary, and the load returns to its normal level within a few hours.

The northern and eastern regions of India experience fog in the winter months, at night and in the early morning hours. Fog coupled with pollution leads to tripping of EHV lines. Frequent tripping of these lines (falling in the fog zone) poses a challenge in operating the grid in a secure and reliable manner. Apart from this, the Himalayan region, comprising Jammu & Kashmir, Ladakh, Himachal Pradesh and Uttarakhand, experiences heavy snowfall during the winter season. During heavy snowfall, many EHV transmission as well as distribution lines trip, resulting in massive power outages in the region.

Cyclones affect thousands of Indians living in coastal regions. This is particularly common in the northern reaches of the Indian Ocean along the Bay of Ben­gal and Arabian Sea coasts. Cyclones ca­u­se heavy rains, large storm surges, and strong winds that often damage power elements in the distribution and transmission systems, causing widespread interruption of power supply to the aff­ected areas. Apart from this, on the po­wer generation front, hydropower de­p­en­ds on rainfall. The increase in precipitation in the catchment area of the plant leads to higher water inflow with a consequent increase in power generation, and vice versa. However, very high rainfall in the catchment area of hydropower plants situated in the Himalayan region increases the chances of outage of hy­dropower stations due to a sharp inc­rea­se in silt in the inflow.

Weather forecasts issued by the IMD have helped regional load despatch centres (RLDCs), state load despatch centres (SLDCs) and discoms in improving their demand forecasts, which have aided in planning and ensuring the load generation balance including demand ramp re­quirements. By observing the movement of thunderstorms/dust stor­ms through the radar system, RLDCs and SLDCs were able to reduce their control area generation as per the predicted demand variations. Along with satellite-based weather warning, live radar imagery has helped the states in sending timely requests to the SLDCs/RLDCs for the revision of schedule for backing down of generating stations in anticipation of thunder­storms/rain. This greatly helped in avoiding huge underdrawal of power, thereby ensuring economic and secure operation of the grid.

Satellite-based weather warning and live radar imagery helps by providing advan­ce notice about thunderstorms and rains to the states and state disco­ms. As a result, the state and discoms are able to send timely requests to RLDCs/ SLDCs, which revise their schedule of power procurement so as to avoid excessive offtake during thunderstorms. Prudent decision-making where discoms schedule power based on weather forecasts aids in secure, reliable and economic operation of the grid. 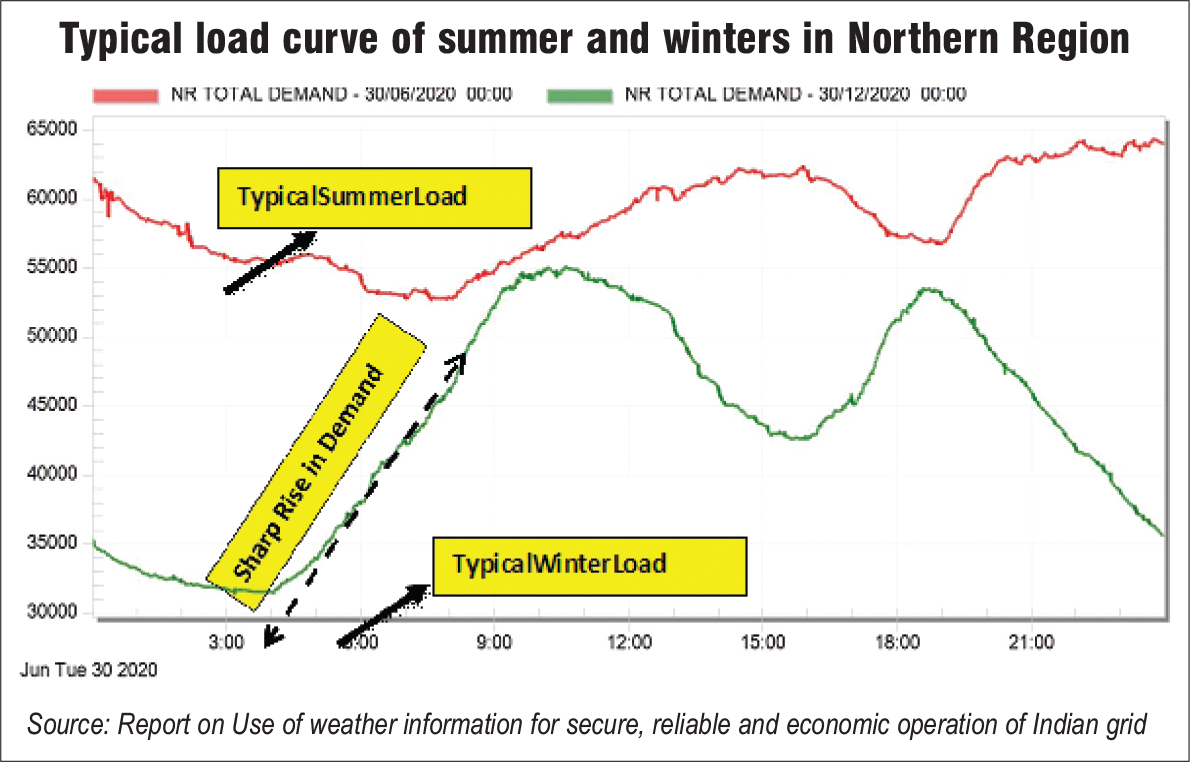 In addition, it helps in reducing operations and maintenance expenses and outages. In the absence of such forecasts, extreme rainfall and frequent thunderstorms may provoke sudden load crashes in pockets and lead to tripping of distribution feeders and transmission lines as the power system is unable to handle extreme drops in temperature.

Warnings and forecasts issued by the IMD for major cyclonic events such as Amphaan, Nisarga, Tauktae and Yaas helped in identifying the transmission and distribution elements at risk. Ad­van­ce actions such as deploying additional manpower at critical substations, and mobilising the emergency restoration system in case of outage of generating units have helped ensure smooth grid op­eration during such events. The awa­reness of the cyclone path and assessment of its intensity in advance from the weather power portal enables system operators to take corrective actions for maintaining system reliability and security. For instance, the IMD provided ad­vance warning regarding cyclonic storm Mora to all the SLDCs and interstate generating stations in the north-eastern region. It also informed them of the extent of generation loss that could be expected from the resulting load crash in the region and accordingly gave recommendations.

Notably, a dedicated weather portal for the power sector has been developed jointly by POSOCO and the IMD. The portal contains information such as weather forecasts, real-time weather scenarios and past data of various locations across the country. Weather information provided on the portal is being used by power system operators across India for better management of the Indian power system.

The NLDC, RLDCs, and SLDCs are using the products/features available on the weather portal on a regular basis. The forecast available at the portal helps them to take proactive steps such as de­mand estimation, decisions on short-term open access, and review of their short-term power sale/purchase portfolio. Real-time information available from radar and satellites helps system operators to make prompt decisions re­lated to grid operation.

Accurate weather forecasting is crucial for integrating wind and solar power generating resources into the grid, especially at high penetration levels. Improv­ing renewable generation forecasts offers a host of benefits to the various power sector stakeholders. In the short term, it will help asset owners and market players to bid better in the electricity markets, and bids based on accurate for­e­casts are at a lesser risk of incurring pe­nalties for imbalances.

Moreover, for po­w­er system operators, this will im­pro­ve unit commitment (ope­ration sc­he­duling of generating units) and operational planning, increase des­patch efficiency and reduce reliability issues, among other things. Over longer timescales (such as over days or seasons), improved renewable generation forecasting based on accurate weather forecasting brings significant benefits to system operators, especially when planning for extreme weather events. By contributing to the allocation of appropriate balancing reserves, long-term weather forecasting assists in ensuring safe and reliable system operations.

Going forward, weather-related information will be increasingly used by po­wer utilities and system operators to ma­intain a secure grid in view of the growing penetration of renewable energy sources. Besides this, the deployment of advanced weather forecasting methods based on artificial intelligence and big data are expected to further improve the accuracy of forecasts as well as provide real-time information.