Substations and switchgear play a vital role in providing reliable supply. As such, various government schemes have been formulated in India for network strengthening and modernisation in the transmission and distribution segment. The focus of some of these programmes, such as the Integrated Power Development Scheme (IPDS) and Deendayal Upadhyaya Gram Jyoti Yojana (DDUGJY), is on setting up new substations and augmenting the existing ones across distribution utilities in the country. Under DDUGJY, work (including augmentation) has been carried out on 7,179 substations as of December 2021. Meanwhile, under the IPDS, as of February 2022, 991 new substations have been commissioned, and 1,601 have been augmented. Further, the recently launched Revamped Distribution Sector Scheme (RDSS) aims to focus on distribution infrastructure works. Transmission utilities have also been focusing on the expansion of substation capacity to further strengthen the network and enable greater integration of renewable energy. During 2021-22, 78,982 MVA of substation capacity was added by transcos across the central, state and private sectors, vis-à-vis 57,575 MVA in the previous year (at the 220 kV and above level).

Under the IPDS and DDUGJY, distribution utilities have undertaken significant substation capacity addition, as well as augmentation. The IPDS was launched in November 2014, with the aim of increasing the quality and reliability of power supply in urban areas. In terms of financial outlay, a total project cost of Rs 310.74 billion has been sanctioned under the IPDS. Key components of the scheme include strengthening of sub-transmission and distribution networks in urban areas; metering of feeders, distribution transformers and consumers; enterprise resource planning (ERP) and information technology (IT) enablement; provisioning of solar panels and underground cabling; gas-insulated switchgear (GIS) substations at locations with space constraints; and real time-data acquisition system (RT-DAS) projects for accurate measurement of power interruption parameters such as System Average Interruption Duration Index/ System Average Interruption Frequency Index at the 11 kV feeder level. Component-wise, around 91.7 per cent of the sanctioned cost is for system strengthening. Projects covering 547 circles in 33 states/union territories are part of the scheme. Of these, system strengthening works in 546 circles have been successfully completed. Apart from this, Rs 17.65 billion has been earmarked for IT and operational technology projects (such as IT-enablement of towns, ERP, RT-DAS and smart meters) and Rs 8.14 billion for new technologies (such as GIS substations). Since the launch of the IPDS, till February 2022, 991 new substations have been commissioned. Further, capacity augmentation has been carried out at 1,601 existing substations. For GIS substations, the total approved project cost, including the project management agency cost, is Rs 8.14 billion. The total grant approved by the central government is around Rs 5.3 billion, of which Rs 4.5 billion has been released. 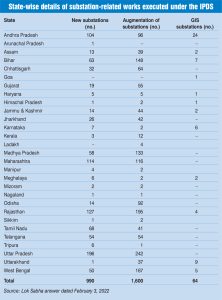 Further, a key component of the RDSS is distribution infrastructure works, required for strengthening and modernising the system as well as for loss reduction. The infrastructure strengthening works will include the construction of new substations and upgradation of existing ones, among other projects. The scheme has a total outlay of Rs 3,037.58 billion, with an implementation timeline of five years (financial year 2021-22 to financial year 2025-26). Funding for substations under the scheme will be as per requirement. The scheme also plans to fund 3,875 supervisory control and data acquisition projects to enable real-time supervision and controllability of substations, including opex for two years, besides other works.

Key developments include the recent commissioning of the first GIS substation in Pulwama’s Lassipora area by the Jammu and Kashmir Power Development Department, which has given a boost to electricity supply. Further, Tata Power Delhi Distribution Limited has installed a 630 kVA submersible transformer under the parking space of its substation building in Gujranwala Town in New Delhi. It is the first submersible distribution transformer set up by a utility in India, installed in collaboration with Toshiba Transmission and Distribution Systems (India) Private Limited. It is virtually a zero-space installation, as the top surface can be used for general purpose applications such as walkways, roads and parks.

Overall, the implementation of various schemes has led to an improvement in the transmission and distribution segment through the expansion and augmentation of networks. Going forward, under the RDSS, each discom/ state will draw up a scheme according to its requirement, with the end objective of reducing losses and ensuring 24×7 power supply. N

An Evolving Market: Trends and growth drivers in the cables and conductors industry

The development and strengthening of the country’s transmission and distribution (T&D) network has always been a key focus area. To this end, a number of government initiatives and programmes have been undertaken such as the […]

Distribution Hope: Signs of recovery in the segment

The power distribution segment has shown considerable improvement over the past year. With the prime objective of supplying uninterrupted and quality power to all, the government has taken a number of initiatives to strengthen the […]

Towards Reliable Power: Government schemes strengthen distribution through IT integration

The power distribution segment has been plagued with several problems including high aggregate technical and commercial (AT&C) losses and unreliable power supply. The integration of information technology (IT) into distribution infrastructure is one of the […]