Solar power has played a key role in accelerating the energy transition in India. The installed solar power capacity has grown considerably over the past decade – from just about 941 MW in 2011-12 to 53,997 MW in 2021-22, recording an impressive compound annual growth rate of nearly 50 per cent. Today, solar power capacity stands at 56.9 GW (as of end May 2022) and makes up half the country’s installed renewable energy base of 113.2 GW (excluding large hydro), while its share in the total installed capacity across all fuel sources (402.8 GW) stood at 15 per cent. Over the years, the segment has largely benefited from conducive government policies and programmes as well as favourable cost economics due to the decline in the cost of modules. Of late, however, the segment has been facing headwinds owing to supply chain concerns, imposition of basic customs duty (BCD), land acquisition issues and inadequate pow­er evacuation infrastructure.

The decline in solar power tariffs vis-à-vis those of conventional power has played a key role in increasing its adoption across states. Between 2010 and 2020, utility-scale solar tariffs have declined from over Rs 10 per kWh to Rs 1.99 per kWh. The lowest solar tariff of Rs 1.99 per kWh was realised in an auction by Gujarat Urja Vikas Nigam Limited in December 2020, wherein NTPC, Torrent Power, Saudi Arabian firm Al Jomaih Energy and Water Co., and Aditya Birla Renewables emer­ged as the lowest bidders. This has mainly been due to a reduction in the cost of solar photovoltaic (PV) modules, owing to maturity of technology and economies of scale in the manufacturing process. In addition, measures such as waiver of interstate transmission system (ISTS) charges and losses for renewable energy projects helped in lowering tariffs and increasing investor appetite. Also, the In­dian government’s ultra-mega solar park model helped players in mitigating risks in solar project development, thereby increasing capacity addition. Other positive policy measures undertaken in the past include mandating the must-run status for renewable energy plants, tax holidays, viability gap funding and feed-in tariffs.

There has, however, been an increase in the prices of solar modules in the past two years, owing to the hike in the cost of key raw materials such as polysilicon, glass, metals (such as copper), etc., due to limited supply. Supply issues were ex­acerbated by lockdowns and facility shutdowns during the Covid-19 crisis and subsequent waves, especially in China, which is a leader in PV module manufacturing. Meanwhile, in India, an increase in goods and services tax (GST) rates on solar cells, modules and inverters from 5 to 12 per cent as well as a rise in interest costs due to increasing repo rates have affected project costs. As a result, an increase has been witnessed in solar tariffs, which ranged from Rs 2.14 per kWh to Rs 3.26 per kWh between January 2021 and May 2022. 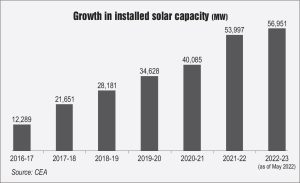 An important development in the sector is the Supreme Court’s verdict on the Great Indian Bustard. In April 2021, the apex court ordered power companies in Rajasthan and Gujarat to take high tension power lines underground to save these birds from electrocution. Until undergrounding works are completed, bird diverters are to be installed. Recently, the court sought an update from the committee overseeing the implementation of its directive. During the course of the hearing, the court mandated installation of bird diverters in priority areas in these states by July 20, 2022. Meanwhile, the Ministry of New and Renewable Energy has granted a 30-day extension on scheduled commissioning dates to renewable energy projects located in priority areas.

Some of the key issues hampering solar power development in the country are policy uncertainty, land constraints, delayed payments from discoms and transmission inadequacy. Among policy impediments, the imposition of GST and BCD is a key concern for developers. Another major challenge for developers is the notification of the ALMM, implemented from April 1, 2022, which mandates the type and source of solar modules to be used for projects under central and state government contracts. The list comprises models and manufacturers of modules certified by the Bureau of Indian Standards. With the ALMM, developers have been mandated to source high efficiency, higher wattage modules in India, thereby putting pressure on costs.

However, there is a severe dearth of domestic manufacturers that produce good quality products. The imposition of customs duty has made modules highly expensive, while the Indian market is not yet equipped to meet the domestic demand. In addition, logistics and freight costs have risen significantly, while commodity prices have been highly volatile. As per JMK Research and the Institute for Energy Economics and Financial Analysis, for developers depending on imported modules, tariffs are expected to be about 48 per cent higher (due to module price inflation, BCD, GST rate hike, etc.) vis-à-vis the record low tariff (of Rs 1.99 per kWh). In addition, delays in approval of power sale agreements, payment risk due to poor financial health of discoms, power purchase agreement renegotiation by certain states (such as Andhra Pradesh and Punjab), delay in open access approvals and high cross-subsidy charges are some other challenges hampering the segment’s growth.

The non-availability of ISTS network is another challenge in the development of solar parks as well as individual solar projects. While solar plants take 15-18 months to develop from concept to commissioning, transmission networks take nearly two-three years to be developed. This lag in the gestation period results in an underdeveloped power evacuation system that leads to backing-down of power plants. Further, the variability in generation patterns of solar energy and the daily uncertainty associated with it makes grid integration a significant challenge, leading to demand-supply imbalance, and voltage and frequency instability. Although key programmes such as the Green Energy Corridors are under way, their timely completion is crucial for realising solar capacity addition. Further, scarcity of land for the development of solar parks is another key impediment. Solar parks need vast tracts of barren land and these are often not available in many states.

The Indian solar segment has indeed made noteworthy progress over the years and emerged as a bright spot in the country’s energy sector. However, the current issues and challenges need to be resolved at the earliest, in order to meet the ambitious renewable energy targets set for 2030. Given the solar capacity target of 300 GW by 2030, there is a need for adding 243 GW in eight years, which is no mean feat. Clearly, all stakeholders in the sector including policymakers, regulators, developers, manufacturers, and engineering, procurement and construction players need to make concerted efforts in the years to come.

Promising Prospects: Net metering could give a boost to rooftop solar uptake

Net metering can play a key role in the uptake of rooftop solar installations. India has a 100 GW solar capacity target by 2022, of which 40 GW is to come from rooftop solar and […]

In 25 years, renewables plus storage will be the dominant generation source, believes Dr Ajay Mathur, director general, International Solar Alliance (ISA). While fossil fuel capacity will continue to serve as baseload, by 2030, the […]

Over the past few decades, technological advancements, along with finance and business model innovations, have led to notable cost and performance improvements in some renewable energy segments, particularly wind and solar photovoltaic (PV). These have […]